Thermoset process scrap costs companies millions of dollars annually. Specific thermoplastics could benefit from the addition of recycled thermoset material. The incorporation of thermoset regrind into thermoplastic material would provide a viable alternative for the thermoset scrap that is currently sent to the landfills.

When a thermoset part has been cross-linked, that material either has to be used in the application it was intended for, or thrown out. In process scrap, generally shear sand/saw grindings and other waste, is shipped to the landfill for disposal.

Don’t waste time
Get a verified writer to help you with A Research Paper on the Recycling of Thermoset Materials into Thermoplastic Composites
Hire writer
$35.80 for a 2-page paper

The lack of recycling in the thermoset industry results in higher final prices for the consumer. Developing a practical method to recycle thermoset materials would create a commercially feasible composite material. The addition of the regrind would reduce the requirement for expensive virgin material, decreasing the composite material's price. This would provide the thermoset and thermoplastic industries with substantial savings.

Thermoset regrind, from Haysite Re-Inforced plastics, polypropylene co-polymer from ExxonMobil, and Silane Q1-6106 from Dow Corning were used to create the new composite.

At Haysite, the regrind is a by-product of the sanding of large laminate sheets of fiberglass-reinforced polyester. Each sheet is sanded to final size, with the waste dust being sent to the landfill. The dust used in this study was taken from Haysite's EMD product line. This regrind consists of approximately 30% glass fibers, 31.5% calcium carbonate filler, 20% polyester resins, and the final 18.5% of the mixture is comprised of organic catalysts, pigments, and trace amounts of highly concentrated chemicals.

The resin and glass fiber portion of the regrind is best if bonded to the polypropylene directly. The silane does not provide any bonding forces between the calcium carbonate and propylene molecules. Calcium carbonate is also hygroscopic which may necessitate material drying if properties are affected by the water absorption.

Dow Corning's Silane Q1-6106 is a high viscosity liquid, and compares best to a waxy gel. The addition of the silane provide significant wetting between the materials, which causes clumping. Multiple, less expensive materials can reproduce the wetting characteristic of the silane, however, the molecular bonding benefits are not duplicable with these other materials.

Originally, it was proposed that the material be compounded through extrusion and palletizing with subsequent injection molding. A regrind level of 20% and 30% was selected to ensure the financial benefits would outweigh the costs associated with silane and the compounding of the composite material. Also, a less expensive alternative was desirable as the costs of the overall process would rise and detract from the cost savings provided by the use of the thermoset regrind. When it became evident that the material could be directly injection molded, this alternative was selected over the extrusion operation. Overall, the procedure followed was clean, efficient, and could be used to produce large quantities of the composite material in a short period of time.

Mixing was preformed to the following guidelines. A five-gallon bucket was lined with two garbage bags, and filled with 4.35 kilograms of the virgin polypropylene. Next, the resin was wetted with 0.17 kilograms of silane. The mixture was then tumbled to avoid clumping in a specific area and to prevent poor distribution of the silane. The second wetting also consisted of the 0.17 kg of silane and a second tumbling. The regrind was then integrated into this mixture by splitting the amount in half, and adding the regrind in two batches of 0.99 kg each. After each addition of regrind the material was tumbled.

To produce the 20% loaded parts, half of the 30% regrind loaded parts were reground into normal pellet size and mixed with virgin polypropylene at a weight ratio that produced a mixture of 20% regrind to 80% polypropylene and silane. This mix was then molded and tested.

The 30% material contained powder that was not attached to the virgin polypropylene pellets. The material did not clump together completely, but the friction created by the silane was enough to curb separation and keep the mixture homogeneous. Since the material did not separate in the machine hopper during molding, direct injection molding was the best processing technique available. Without the silane acting dually as a wetting agent and a molecular bonding agent, the regrind would have filtered to the bottom of the hopper and created a non-uniform loaded part.

The parts were molded using an Arburg Allrounder Injection Molding Machine. The process settings can be seen in Tables 1-3 in the Appendix.

The virgin polypropylene was molded using the manufacturer's recommendations. The 20% and 30% mixtures followed the mixing procedures outlined. The composite materials required higher hold pressures to pack the mold completely, as the original hold pressure was not adequate. The back pressure was also increased in order to provide homogeneous mixture of the composite material. The higher back pressure also caused the temperature of the melt to be approximately 50 Celsius higher.

Four tests were run on the molded tensile and flexural bars for all three materials. The first was the flex test on an Instron machine, following ASTM D-790. The flex bar lies horizontally on a base and is supported at the ends while a crosshead presses in the center of the bar, moving at a rate of 50.8 mm/min.

The second test as the tensile test, using ASTM D-638 guidelines, which was performed on the same machine. The tensile bars were placed vertically in tow crosshead grips, one on the top, the other at the bottom. The top crosshead is then pulled upward on the bar at a rate of 50.8 mm/min, stretching the bar until it fails.

The third test was the Notched Izod impact test, according to ASTM D-256 on an Izod testing machine. First, the flex bar was notched on one wedge, about 2 mm from one edge. Next, it was placed vertically and clamped on the bottom of the machine. A 2.27 kg hammer was then released and swung over the bar, breaking it. The impact strength and type of break was recorded for each sample.

The fourth test conducted was an extended load test. Five flex bars of each material had small holes drilled into the center of each end. Each bar also had a one inch space measured out and marked, to be used to measure once the load was applied. Brass rings were used to connect the five similar bars together, and then they were hung from a beam and a 26.4 kg load was hung from each chain of bars. The distance between each reference mark on each bar was measured at the initial time, 5 minutes, 15 minutes, 90 minutes, 1 day, and 1 week. These results were than averaged and recorded for each material sample.

The results of the testing can be found in the Appendix. Graphs 1-4 compare the three different sample bases used in this experiment in the tests previously described.

Improvements to the procedure could be made to this study. First, the choice to straight injection mold the samples versus extruding the material mixture and re-pelletizing the composite. This was because the use of the silane was sufficient to cause the two materials to clump together. Pelletizing the material would then just be extra time and cost.

With using the straight injection molding technique of processing, although of good quality, the homogeneousness of the material is still uncertain. This is the reason for averaging all of the tests' results according to batch.

The levels of thermoset integrated into the virgin polypropylene samples were decided based on industry's use of 20% and 30% filled resin in production. Further testing should be done on levels under 20% in order to better show the regrinds affects on the mechanical properties of the polypropylene. This is evident in the Notched Izod testing (Graph 3 of the Appendix). The resultant curve between the levels of regrind may differ a great deal after exploring levels of regrind less than 20%.

Discussion was held on the choice of using Silane over basic vegetable oils in order to wet the mixture creating clumping. Testing could be done to compare the use of oil to the current use of silane.

Until recently there have been little to no uses found for thermoset scrap. Millions of dollars are spent annually on handling and disposal of their potentially useful and profitable materials. The integration of this particular thermoset into polypropylene applications is only one possibility in the reuse of thermoset materials.

Although on a small scale, the study was effective and simple. If applied on an industrial level it may prove to be very profitable to both the plastics industry and the consumer.

A Research Paper on the Recycling of Thermoset Materials into Thermoplastic Composites. (2021, Oct 31). Retrieved from http://envrexperts.com/free-essays/essay-about-research-paper-recycling-thermoset-materials-thermoplastic-composites 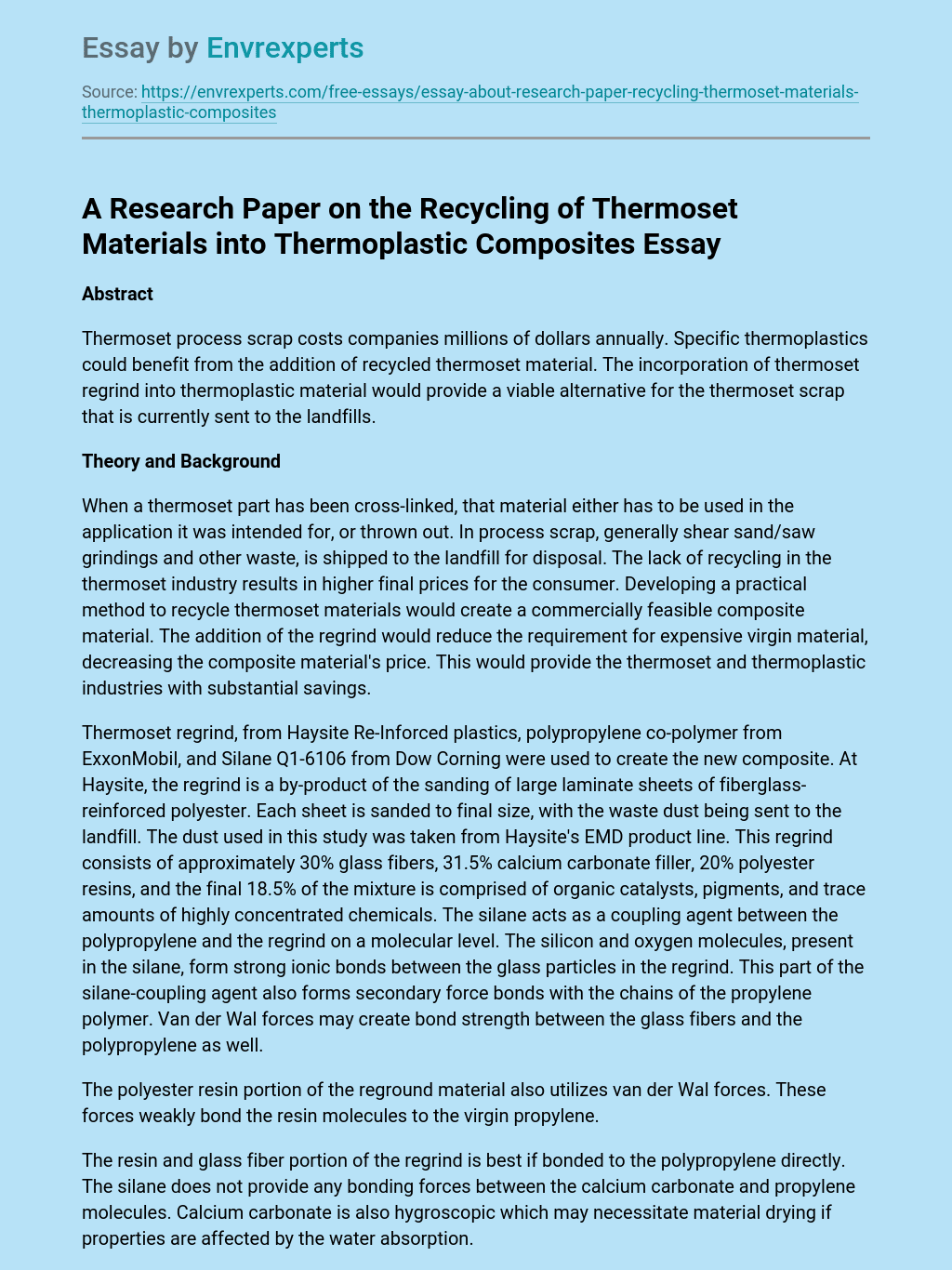