My research proposal is to conduct research on the feasibility of vertical farming in local urban settings. My research will go over the cost of production and the cost running and maintaining of a vertical farm in the north Texas area.

Vertical farming is the concept of building fields and orchards one on top of the other in a skyscraper like building. The idea is based on indoor food growing technologies found in greenhouses and applying them to multilevel structures.

Don’t waste time
Get a verified writer to help you with A Research Proposal on the Feasibility of Vertical Farming in Local Urban Settings
Hire writer
$35.80 for a 2-page paper

Regulating efficiency through temperature, humidity and other variables to ensure the plant’s growth would be of vital importance (“The Economist”).

In a large controlled environment such as this, pesticides, herbicides and fungicides could be kept to a minimum. Workers would pass through multiple level tests to ensure there are no foreign toxins on their body as they enter the vertical farm.  The environment could be tightly controlled to ensure no pests got into the plants. Surveillance systems could be installed to check plants for diseases or make them easier to spot (Despommier).

The research will yield how cost effective it is in the future to build a vertical farm in this environment and how efficient it could be with our current technology. The ultimate question is how feasible building a vertical farm is at this time in this location, and how much money it would or would not save us when compared to our current agriculture practices.

Efficiency is major concern for a project like this. Fine tuning the environmental conditions such as humidity, light, airflow and the nutrients is possible at any place on earth. Since 2004, the Amundsen-Scott South Pole Station has used a semi-automated hydroponic facility to produce food year round in Antarctica.  The chamber is twenty-two square meters and uses artificial lighting as there is no natural light for most of the Antarctic winter (“The Economist”).

Hydroponics is a major way of improving growth efficiency. Hydroponics suspends plants in a medium and the roots are submerged in nutrient rich water. Water can also be easily recycled in this system (“The Economist”).

A study by Columbia University professor Dickson Despommier and his medical ecology students found that a self-sustaining vertical farm could feed 50,000 people with a footprint of one city block and a height if eighteen stories. Larger version up to thirty stories could be built later (Nelson).

Dickson Despommier has put considerable research into vertical farms and how they could be built. He found that many foods could be reasonably grown indoors including corn, wheat, bananas and coconuts. Other foods such as root vegetables like potatoes can be grown using other soil based farming techniques. Poultry, fish, crustacean and mollusks could also be reasonable raised in a vertical farm. Larger animals such as cattle or sheep aren’t considered practical in Despommiers experiments (Despommier).

One major obstacle to vertical farming is the cost of cost of artificial light. Even in a glass building, natural light will lead to an uneven crop growth, and natural light is necessary to ensure a year round production. Some have argued the energy needed for the year round lighting is not cost effective. Solar panels and wind turbines are some solutions to gain a zero net carbon emission vertical farm running. Another idea is to have plants moving on rails to ensure even light exposure (“The Economist”).

Dickson Despommier has also said the widespread use of vertical farms will be able to “slow down the clock” on climate change. Plants reabsorbing CO2 from the atmosphere would be able to lessen the speed of climate change in the coming decades. He also cites the changing pH level of the oceans as a cause of concern that could be alleviated with more plants in vertical farms (Despommier).

Dickson Despommier calculated that a thirty story, one square block vertical farm would have a predicted profit margin of eighty million dollars. He predicted the profit margins of produce, fish and shellfish and took out overhead expenses such as salaries, taxes, energy consumption and other expenses to arrive at that number (Despommier).

In his idea of a vertical farm, Dickson Despommier envisioned a tightly controlled environment to ensure the safe production of food. Employees would have to pass through an extensive procedure, undressing, taking a shower and wearing company clothes, to ensure a sterile environment for the food to be grown in (Despommier).

My plan for conducting this research is to begin by assembling a team who have specialized knowledge in the many different fields required for a project such as this. We would need to have on our team people with knowledge and skills in architecture, agriculture, engineering, as well as significant knowledge in the current field of vertical farming. Since this study is to determine the feasibility of building a vertical farm most of our research will be researching the local area, the current technology of growing plants and the most effective way to build a vertical farm. My goal is for this entire project to take about six months once a full team is assembled.

The first goal is to determine the most likely place in the general area of north Texas that a vertical farm could be built. Research into local building codes, the availability of produce and the possible profit margin of selling or shipping produce at that location will be the main points that go into that decision. This will take about six weeks overall.

The next major goal will be researching the current technology and effectiveness of various agricultural techniques and designing a feasible vertical farm itself. This will be the longest portion of the project, and creating a design for a full vertical farm from the ground up will take a considerable amount of time. This will take about twelve weeks, half the overall project time. The design of the vertical farm is to be efficient and feasible. The actual cost of building it is not a major factor as the actual construction of a vertical farm is not within the scope of this project.  The final design must be able to reasonable be built in the location we determined beforehand. I anticipate problems may stem from a lack of communication or a disagreement the overall purpose of the design. The purpose of the design is to be as efficient as possible in the growing of plants in this environment.

The final goal of the team is to determine the overall cost effectiveness of building this and determine the feasibility of the design we devolved in the second task. This will take six weeks. This will take into consideration the overall cost of the building, the profit that can be projected from it. This final task will determine if the design we created is reasonable taking into consideration the costs and projected long term profit we can project.

A Research Proposal on the Feasibility of Vertical Farming in Local Urban Settings. (2021, Oct 31). Retrieved from http://envrexperts.com/free-essays/essay-about-research-proposal-feasibility-vertical-farming-local-urban-settings 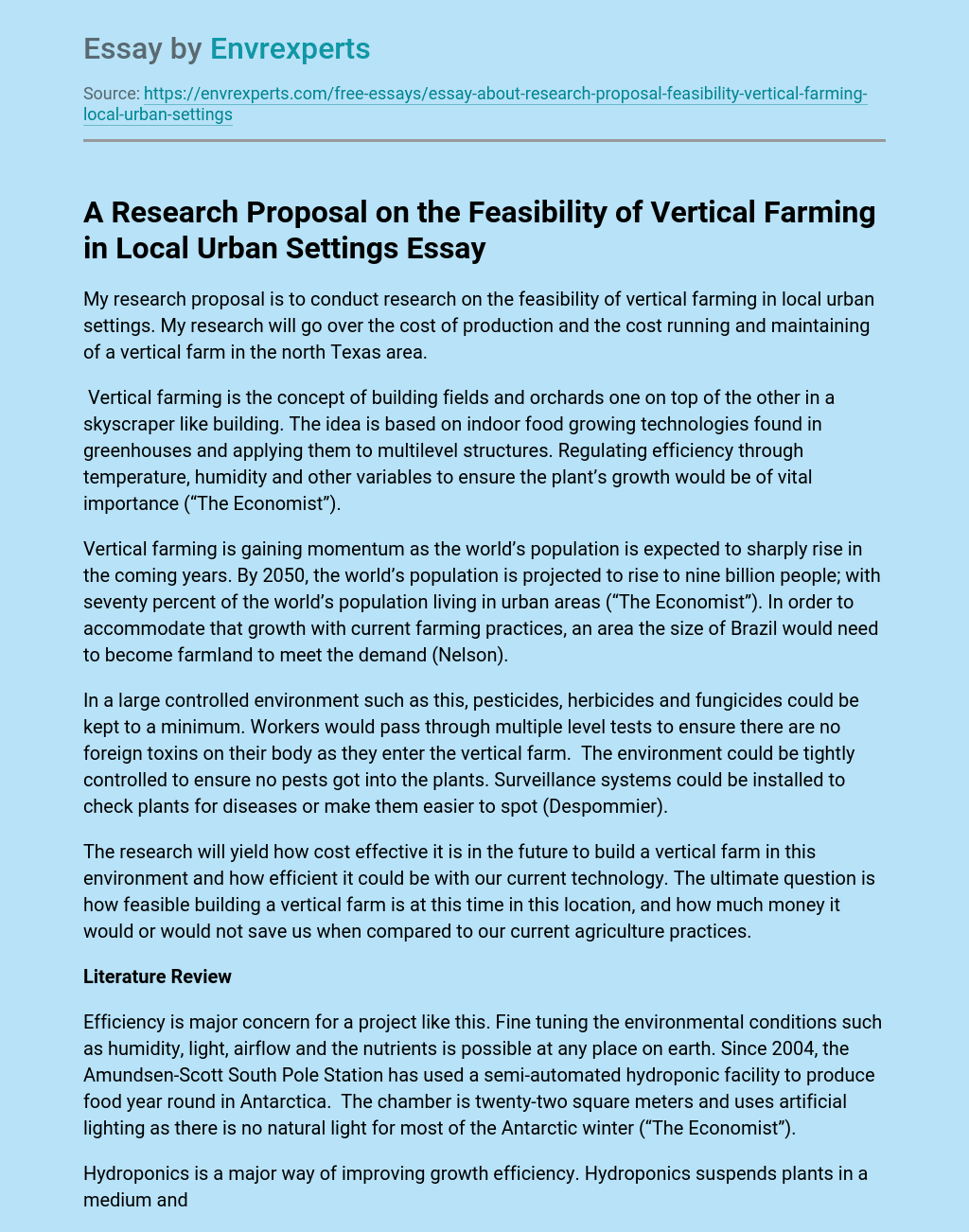