A Research on Silent Spring, a Book by Rachel Carson

It has been 50 years since Rachael Carson's Silent Spring was first published in 1962. Kick starting the environmental movement, Silent Spring awoke a completely different approach to science, and today people worldwide sing Carson's praises. It was her unprecedented ability to "hit home” with readers that paved the way, as her content proved to be both practical and applicable. It was her figurative writing and literary flair that evoked one's protective emotions, causing Americans everywhere to question the use of pesticides.

Don’t waste time
Get a verified writer to help you with A Research on Silent Spring, a Book by Rachel Carson
Hire writer
$35.80 for a 2-page paper

At home, as I scoured the search engines for an educated analysis of Silent Spring, I found that the jury was still out for Carson's work. To my surprise, the collaborative voice from an array of different scientists cried out to me in both blog and essay form, in opposition to Silent Spring. After thorough research, the general consensus seemed to be that Carson's persuasive writing abilities far outweighed scientific discoveries. In Silent Spring, Carson's sense of urgency, alongside of her manipulative literary strategy, serve the goal of her book, but ultimately blur the dividing line between scientific fact, and hypothetical rhetoric.

Rachael Carson's personal affection for nature is evident in Silent Spring as she continually uses an urgent tone when describing the negative affects that pesticides have on nature. She draws attention to the fact that nature is in perfect balance, but hanging by a thread. As she describes the potential destructiveness of chemicals, Carson does well to challenge her readers to pursue environmentally friendly solutions to the problems at hand.

In her urgency, it is Carson's goal to awaken that same love for nature, while creating disgust in the minds of readers of the potential dangers of pesticides. As she pleads that the earth must be protected, she provides carefully selected pieces of scientific evidence to enforce the reality of her otherwise capricious claims.

In the 1st sentence of Silent Spring's 1st chapter titled "A Fable for Tomorrow," Carson sets the obvious premise for the rest of the book: “There was once a town in the heart of America where all life seemed to live in harmony with its surroundings.” New York Times literary analyst, John Tierney, refers to her gross exaggeration of the state ofnature pre-pesticides, as a “Disney-fied Eden.” In other words, Carson sets out to paint a picture of perfection before pesticides were a factor.

In Silent Spring, Carson's choice pesticide and main item of disparagement denigration is DDT. Carson makes DDT into a villain, and completely robs the pesticide of its noteworthy accomplishments. In the 1940's, DDT was tested and used by the United States military and in 1943 was used to halt the Typhus Plague that spread through Naples. DDT was commended as being the heroic chemical of World War II. It was for this reason that in 1948 Dr. Paul Mullen was awarded the Nobel Peace prize for the discovery and invention of DDT. Shortly after, the World Health Organization recognizes DDT in the saving of 50-100 million lives from malaria. Carson gives no credit to DDT's life saving qualities as again, she uses pseudo evidence to manipulate real facts. She says, “12 percent of all deaths in children between age 1 and 14 are caused by cancer” (193). Carson uses this misleading statistic to cover up that the percentage of death by cancer was increasing, however, the number of deaths were not increasing. The reason that cancer was becoming a leading cause of death was not because chemicals invaded our earth, but instead it was because DDT and other pesticides had eliminated nearly every other disease or sickness causing young death.

50 years after the publishing of Silent Spring, a great trail of chaos and turmoil still follow. Undoubtedly Rachael Carson identified problems that were in need of revision and birthed an eco-friendly mindset that is still relevant in most Americans today. Although she may not have properly presented the facts, Silent Spring threw many Americans into a newfound state of protection for Nature, which goes to show the extent of what great writing can accomplish. Scientifically speaking, Silent Spring is neither here nor there, but from a literary standpoint, it is one of the most magnificent works that achieved its equally magnificent goal. Rachael Carson may have blurred the line between fact and rhetoric, but through her urgent tone and manipulative strategy, her goal was served, as one of the most impactful novels in the realm of scientific literature was born in Silent Spring.

A Research on Silent Spring, a Book by Rachel Carson. (2021, Oct 31). Retrieved from http://envrexperts.com/free-essays/essay-about-research-silent-spring-book-rachel-carson 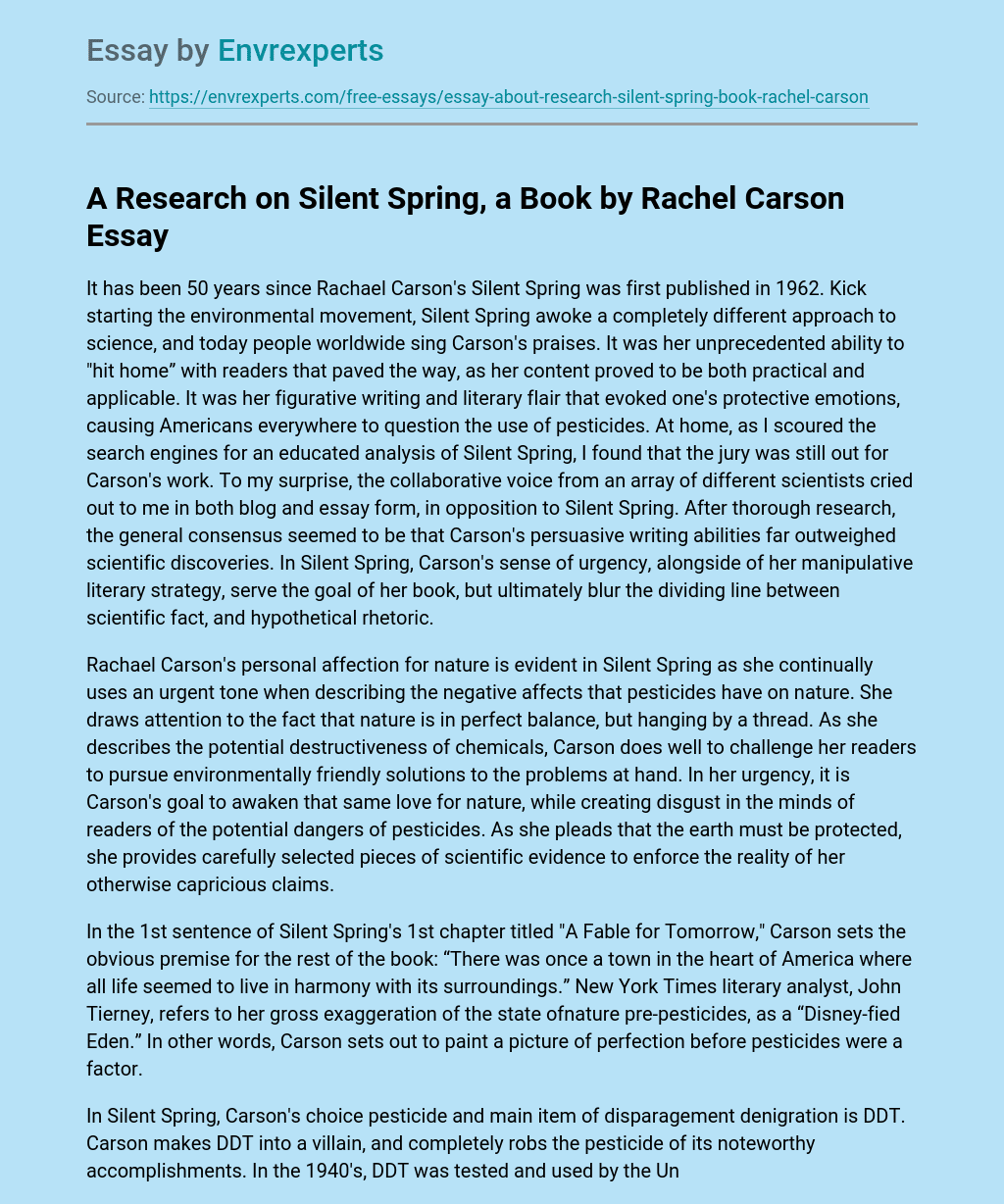