A Research on Solar Power Production and Storage

In recent decades it is undeniable that solar energy has made advancements and progress in its technology. Each year it becomes more efficient and an increasingly viable alternative to non-renewables for global electricity production. Similar to other technologies like GPS, the United States has used subsidies and publically funded research to advance clean and renewable energy technologies such as solar, wind and geothermal. My research will focus solely on solar power production and storage.

A difficultly in comparing a renewable technology, such as solar, to a fuel like natural gas is the difference in cost outcomes.

Don’t waste time
Get a verified writer to help you with A Research on Solar Power Production and Storage
Hire writer
$35.80 for a 2-page paper

A solar plant has a large up-front price and costs very little to maintain each year after construction to maintain. Natural gas on the other hand is relatively inexpensive and although the price can fluctuate, it is immediately cheaper than a renewable source. A field of solar panels will eventually “pay-off” and be cheaper than the relatively stagnant price oil or natural gas; the question is when (Covert et al).

The advantages for solar power for the United States are obvious. It is clean, renewable and reduces the reliance the United States has on Middle Eastern countries producing cheap oil. Additionally, with the signing of the Paris Climate Accords the international community has shown combating climate change is an agreed upon global priority.

If devoid of government incentives, can solar energy become competitive with oil and natural gas in the United States, and if so when? My research question will be tested quantitatively.

The first applied concept I expect to look at is year-by-year solar energy production. This has increased in recent years and can be predicted with a degree of certainty (Covert et al). An indicator for this would be the CO2 emissions from energy production. Similarly I can look into the decrease of non-renewable production as an indicator. A second concept is solar energy production. The indicator for this is the cost of solar in the standard unit of price per kilowatt-hour. This is another measure that has decreased exponentially in the last decade. Looking at the cost of energy I will research exactly when solar is predicted to overtake non-renewables.

There are different opinions on the topic. Optimistic advocates are claiming that the barrier has already been broken and subsidies are necessary purely as a way to accelerate inevitable power transition (Pinner and Rogers). Skeptics see problems of energy storage, initial facility cost and efficiency rates as barriers that would kill solar production without government subsidy (Covert et al).

Practically, my research is meant to explore if our country should subside solar technology or not. From the reading I have done thus far my theory is that solar energy will become competitive with non-renewables in the next 20 years, but until then it is necessary to subsidize production.

A Research on Solar Power Production and Storage. (2021, Oct 31). Retrieved from http://envrexperts.com/free-essays/essay-about-research-solar-power-production-and-storage 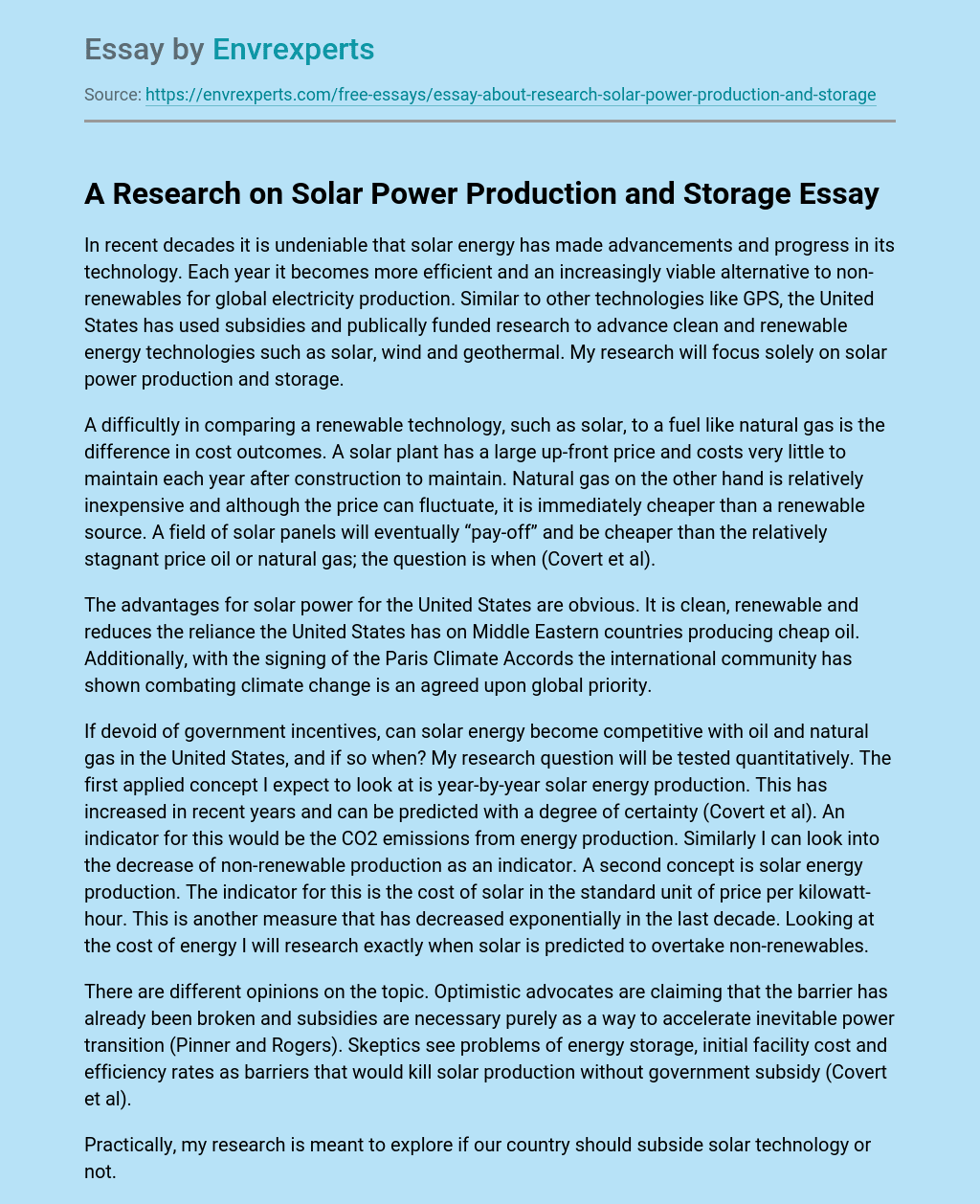