“The pearl of the Indian ocean” is one of the names used to identify this little tiny Island called “Sri Lanka” which became a colony of Portuguese in 1505, Dutch in and British in 1815 respectively and became independent on 04th Feb 1948.Thereafter the Sri Lankan economy strated to flarish.

Sri Lanka has been undergoing certain identified issues since its independence such as Law GDP growth, non-availability of proper Cottage and SME industries, High level of annual debt repayment and Geo political pressure.

Don’t waste time
Get a verified writer to help you with Resources of Sri Lanka
Hire writer
$35.80 for a 2-page paper

This assignment emphasizes on ways and means to develop the Sri Lankan economy eliminating the aforementioned constrains and draw an applicable recommendation to take our little island into a greater heights economically. Budget deficit fiscal and monitory policies foreign exchange reserves.\nMost of the people suggest that Sri Lanka should develop strategies to make a “Economic Model” like Singapore.

Further some say that “Home grown” model should be developed to suit our economy.

\nLow Growth in GDP \n\n\n\n\n\n Sources: Department of Census and Statistics Central Bank of Sri Lanka. The average annual growth rate of the Sri Lankan Economy is 5.4% over the past 10 years (2009 to 2018).it is observed that during the period of 2009 to 2013 just after the end of 26 years of the ethnic conflict 6.5% of average annual economic growth prevailed. The growth in GDP was 8%, 8.4% and 9.1% respectively during the years of 2010, 2011 and 2012 which was a continuous impressive improvement over the three years.

However the growth in GDP drastically came down to 3.

4% in 2013.Further Average annual growth rate came down to 4.2% during the period from 2014 to 2018.Two percentage point reduction compared to the previous five year period. The lowest GDP growth of 3.2% in 16 years was recorded in year 2018.it was further predicted that the same would reduced even to 3% in 2019 with the Ester Sunday attacks in April 2019. Dr,Rohantha Athukorala. Foreign Direct Investment (FDI). The The inflow of FDI inclusive of loans of registered BOI companies received was US dollars 2,366.93 million in 2018.

This is compared to US dollars 1,703.03 recorded in 2017 and the growth is 38.4%.This is mainly because higher FDI inflow to the country for the development of infrastructure related projects generating a growth of 70% in 2018 totaling to US dollars 1,773.7 million in comparison to the previous year. FDI inflow to the manufacturing sector recorded a decline of 16.1% and the contribution towards the FDI was 12.7% which is US dollars 291.5 million. Further, service sector recorded a FDI inflow of US dollars 301.3 million which is a decline of 5.2% compared to the previous year.

There are some key factors which work together to draw FDI to a country. The highest contributor to the GDP growth in China was the FDI over last 20 years. The most conventional factor is “cheap laboure” which came into existence after the huge improvement in USA economy which resulted a high laboure cost. They commenced relocating their factories in which the production base was carried out, in Africa, Asia and South America to obtain cheap laboure. As a result FDI started to inflow into China and India. The cheap laboure was one of the key factors in Sri Lanka in attracting FDI during last 25 years where is no more.

The development of refined skills results in attracting investments and in this sinario some argue that that we must have a policies similar to Singapore The increase in GDP per capita has been 7.4% over the past five years. The GDP per capita improved by 493 dollars 3,609 to 4,102 during the same period.It has been annualy increased by 2.6% purly because of rupee depreciation which is an average rate of 4.7%\nRecommendation to attract FDI to Sri Lanka The establishment of the Colombo Port City and Hambantota industrial zone will attract higher FDI inflow to the country. Further Private Public Partnership (PPP) is another focal with regard to inflow of FDI to the country.

The CSE should not be manipulated by few richest people in the country.\nBudget Deficit The revenue of Government reduced to 13.3% of GDP during 2018 for net lending and expenditure reduced due to less public investments disturbed by political tensions prevailed at the latter part of the year 2018.Thus failed to implement budgetary operations. The reduction in capital expenditure too resulted in reducing economic activities in 2018. Gross domestic Product at constant Prices 2002 – 2018(a)

The population in Singapore is one –quarter of 1% of China, With a population one-quarter of 1% of China's, Singapore\'s GDP is 10-8%. Its manufactured exports are twice the value of Brazil\'s (World Bank, 1993A, and 1991, p. 59\n 2. Macroeconomic performance The Gross National Product improved during the period of 1960 to 1992 which made the world 33rd highest per capita income during 1965 and during the year 1992 it was ranked as 17th even to defeat Spain, New Zealand and Ireland (World Bank,1994). The lowest infant mortality and highest life expectancy in the world. The full employment and the virtual nonexistence of poverty since 1973. The approach towards the planning has been above the expectations of the Word Bank’s “market friendly” in view of including “market replacement”.

The capitalism was prevailed as a result of critical withdrawal from price mechanism and a regime managed domestically.it was observed that the economic planning has been the key factor in developing Singapore more than thirty years and execution of the strategic economic plan of the country.(Singapore, Economic Planning Committee,1991,p.14). \n\n Overview of Singapore Singapore has over four million population living in an area of 685 sq km and has no natural resources. Sir Stamford Raffles who is from British East Indian Company arrived to Singapore in 1819.The British came to the Island in 1824.The Suez Canal was opened in 1869 making the Singapore as a vital port in South East Asia.

By the passage of time Singapore became independent on 09th August 1965.\n\nNon Availability of proper Cottage SME industries \nThe evolution of the SME sector in Sri Lanka goes to way back in 1952 in which year World Bank advised the development of SME was more important than supporting large industries. The Sri Lankan Government commenced focusing on improving cottage industries and SMEs in 1960s in view of saving foreign exchange by way of curtailing imports and to develop the employment.

SMEs were improved focusing the export market with the introduction of liberalised economy in 1977 with which the SME sector stared to be considered as the backbone of the economy of the country. In view of developing the SME sector of the country Government established department like EDB, SLSI, IDB and National Gem and Jewelry Authority. Further they established banks like DFCC,NDB and RDB to boost the purely the SME sector of the country. Classification of SME SME is inclusive of manufacturing and services sectors where the highest contributor to the GDP, export earnings, employment generation and development of the country on region wise. Further, the vital role in SME is supply chain among huge industries and services sectors.

The Central Bank of Sri Lanka, has defined the SME sector through the Implementation of BASEL III guidelines, which are explained below in point forms. – The maximum lending exposure to SME should not exceed Rs.250 Mn – The annual turnover of the SME shall not exceed Rs.750 Mn – The annual turnover should be based on the audited financials certified by a Charted Accountant or an approved accountant acceptable to the Department of Inland Revenue at the point of evaluating the facilities. – The Bank is given the freedom to adopt their own criteria avoiding the 03 for facilities less than Rs.50 Mn when granting facilities to SME sector.

SME challenges An absence of clear policy is one of the key concerns in Sri Lanka. if we look the countries like Thailand and Philippines Some of the main issues with regard to SME sector are Absence of business development services, insufficient research and development facilities, District level quality certification and the connection to the export market. The biggest dilemma is the non-accessibility to concessionary finance. Failed to develop the back bone of the country’s economy.

High Level of Debt repayment (Central Bank Annual Report 2018.) Government debt has been continuously rising since the independence. The annual average growth of 2.8% has been the debt of the Government to GDP ratio during 1950-2018.The nominal income growth averaged around 4.5% during the said period and the cause for concerned is the increase in Government debt. This has a negative connotation on continued fiscal deficit, hindrance to concessional financing and the devaluation of the local currency. In this sinario the Government is compelled to go for commercial borrowings by issuing International Sovereign Bonds, borrowings in foreign currency from domestic banks and syndicated loans which will result an increase in foreign currency debt.

As it was observed in figure 8.1 16.9% of debt to GDP in 1950 has been gradually increasing even above 100% of GDP at a certain period before coming to 68.7 in 2012.Further it has increased to 82.9% of GDP in 2018. As depicted in above table, the Government has a clear plan to bring down the debt to GDP ratio less than 70% in year 2023.This is possible by generating primary surplus which has to be generated robust revenue enhancement based on revenue fiscal consolidation.

Widen the tax base while structural changes being made to the tax administration are vital aspects in this regard. Further, the justification of the recurrent expenditure too very important.\n\n\nThe income tax Structure Low revenue generation The income tax Structure \n\n\nHow to overcome the impact Geo-political pressures\nHow we can take Sri Lanka to a greater heights economically by overcoming above constrains. Consider these areas Budget Deficit /fiscal and monitory policies Foreign Exchange Reserves when making recommendations. 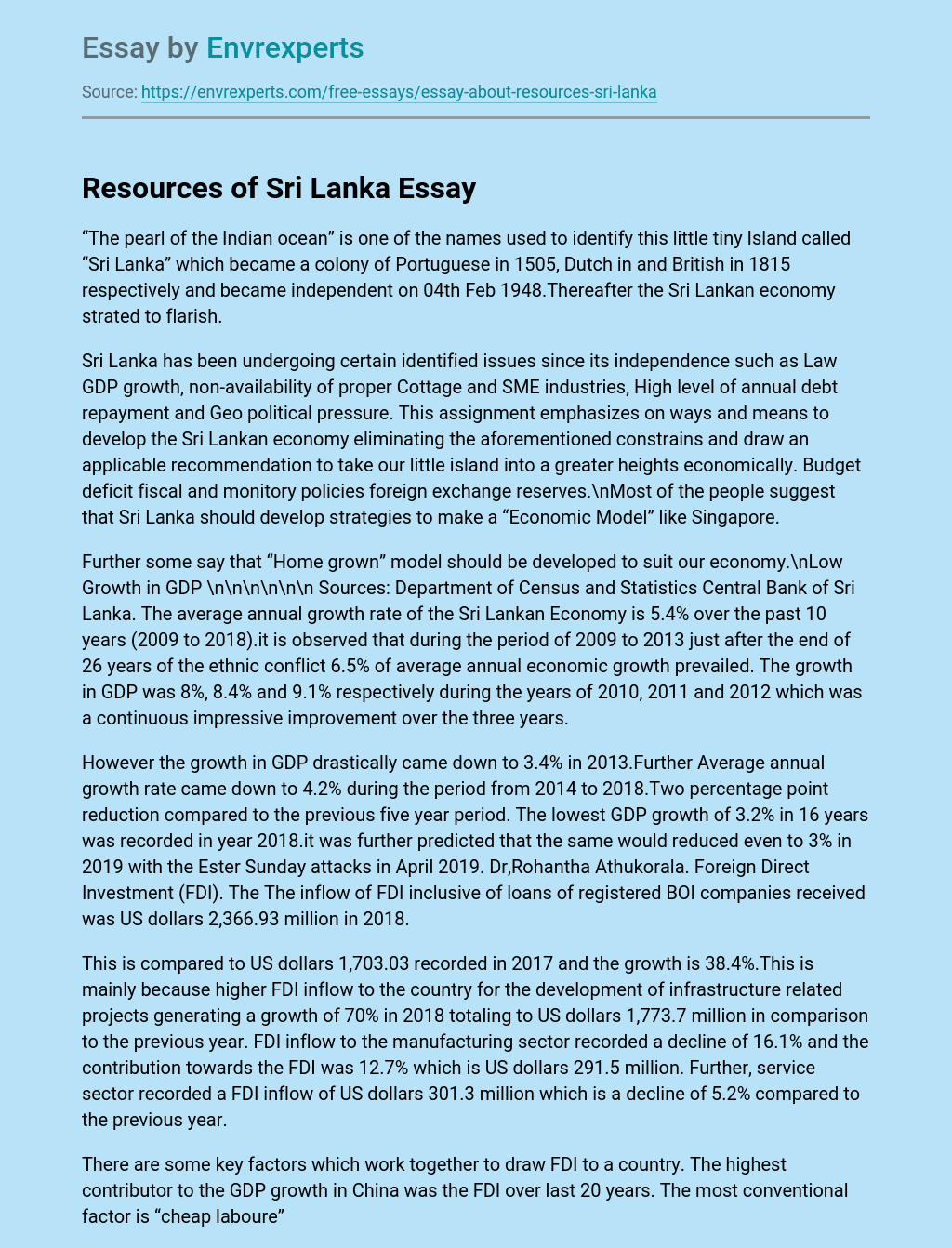