A Review of Asbestos and the Associated Disease

Asbestos is the name for a group of naturally occurring silicate minerals that can be separated into fibers. The fibers are strong, durable, and resistant to heat and fire. They are also long, thin and flexible. Asbestos fibers can be molded or woven into various fabrics. Because it is nonflammable and a poor heat conductor, asbestos has been widely used to make fireproof products such as safety clothing for fire fighters and insulation products such as hot-water piping. Asbestos has also been used in building-construction materials, textiles, missile and jet parts, asphalt and caulking compounds and paints, and in friction products such as brake linings.

Don’t waste time
Get a verified writer to help you with A Review of Asbestos and the Associated Disease
Hire writer
$35.80 for a 2-page paper

Since the 1960s, asbestos has been recognized as a potent carcinogen and serious health hazard. Inhalation of airborne asbestos fibers has been established as the cause of asbestosis (thickening and scarring of lung tissue) and as a cause of mesothelioma (a highly lethal tumor of the pleura) as well as of cancers of the lung, intestines, and liver.

The main symptoms include shortness of breath on exertion, a persistent cough, chest pain or tightening of the chest, nail abnormalities (such as ridges developing on the nails or white streaks on the nails) and thickening of the fingers and toes. There is no cure for asbestos diseases, but, as severity depends on the length of exposure and amount of asbestos dust inhaled, early identification through chest X-ray can prevent further exposure and worsening of conditions.

Asbestos is obtainable by various underground mining methods, but the most common method is open-pit mining.

Only about 6 percent of the mined ore contains usable fibers. For many years mining companies have known about the connection between mesothelioma and asbestos, but choose not to inform their employees. Moreover, while many employees became sick and suffered lung disease, some companies had their doctors diagnose those employees with lung cancer caused by smoking. In 1972, the Occupational Safety and Health Administration began regulating asbestos and strengthening work safety standards. Large class action lawsuits were filed and won against asbestos companies, which had probable prior knowledge of the dangers involved. In 1989, the Environmental Protection Agency imposed a ban on 94% of US asbestos production and imports, to be phased in over a seven year period.

Asbestos is not always an immediate hazard. In fact, if asbestos can be maintained in good condition, it is recommended that it be left alone and periodic surveillance be performed to monitor its condition. However, when it is damaged, asbestos fibers are released into the air. If inhaled, these can have very serious effects on health. This is one of the problems which survivors of the attack on New York's World Trade Center, as well as hundreds of workers involved in the rescue operation, may eventually face. Since the first 40 floors of the north tower and had allegedly used asbestos, when fires engulfed the towers, health officials feared that the asbestos was released into the air. "We're getting in there and testing to make sure things are safe," says EPA administrator Christine Todd Whitman. "Everything will be vacuumed that needs to be, air filters (in area buildings) will be cleaned, we're not going to let anybody into a building that isn't safe."

Asbestos is still a problem because a great deal of it has been used in the United States and elsewhere, because many asbestos-containing products remain in buildings, ships, industrial facilities and other environments where the fibers can become airborne, and because of the serious human health hazards of inhaling asbestos fibers.

A Review of Asbestos and the Associated Disease. (2021, Oct 31). Retrieved from http://envrexperts.com/free-essays/essay-about-review-asbestos-and-associated-disease 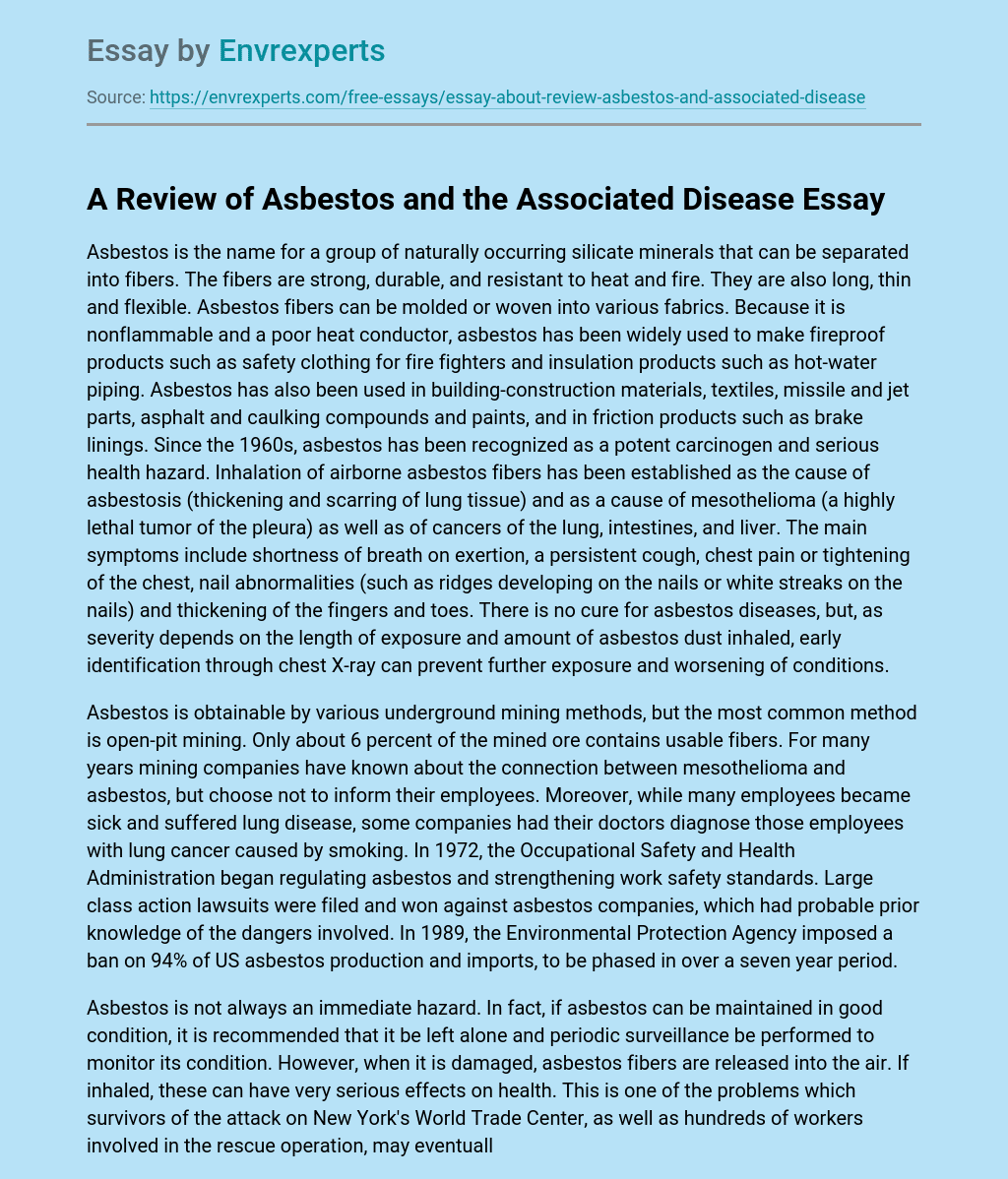