I am contacting you on behalf of ESS, a company that advances in consultancy services for organizations to instil UN Sustainable Development Goals as a segment of their key strategic development. This helps companies to strengthen brand recognition and prestige to boost its fiscal performance and market share value (Perez, 2015). In 2011, Coca-Cola launched the ‘Water Stewardship Program’ to improve its water policy globally. The policy promised to replenish 100% of the water which is utilized by the company to make their drinks.

Don’t waste time
Get a verified writer to help you with Review on Coca-Cola’s Recycling Politics
Hire writer
$35.80 for a 2-page paper

Later, the program was authenticated by Deloitte (Coca-cola.eu(a), 2020). Water being Coca-Cola’s indispensable ingredient, it was an important footstep to adopt a sustainable supply chain for its sourcing (The Coca-Cola Company, 2020). In recent years, Coca-Cola recognises the time for modification and transforming the business for a sustainable future by establishing a “New World” partnership with Global Water Challenge that helps address good education (SDG 4), women’s empowerment (SDG 5), piloted innovative solution to access clean water and sanitation (SDG 6) and strengthen the global partnership (SDG 17).

The scheme operated in 19 countries and benefitted millions of people (UNDP, 2016). In every instance, the methods used to access safe water, sanitation and 100% restored water quantity, does not benefit the communities it aims to serve. This hinders Coca-Cola to accomplish its goals (The Coca-Cola Company, 2018) and could result in a backlash and reputational damage. ESS Global Alliance 49 Sadar Bazaar Agra, Uttar Pradesh 282001 India Lately, Coca-Cola took an initiative to reshape its packaging waste worldwide. Subsequently, the company introduced its new ‘World Without Waste’ vision that aimed at reducing waste caused by packaging and building a green circular economy (Coca-Cola Company, 2019).

The program created a great impact universally, for example- Introduction of Plant Bottle that used 30% plant-based materials instead of petroleum and collaboration with PetStar in Mexico that recycled 57% of the PET plastic it generated (Quincey, 2018). Coca-Cola being the major player in the industry with a market share of 43.3% in the USA (Statista, 2020), can use this approach as a competitive advantage against its rivals, pushing them to follow the similar path. This assists Coca-Cola to have a sustainable distribution system and eco-friendly environment, addressing SDGs 12 and 14 (Coca-cola.eu(b), 2020). Nevertheless, critics argued that Coca-Cola has deceived their targeted customers since its water program reveals that they are overstating the water history, which in turn leaves the company’s new recycling plan ambiguous (The Verge, 2018). Other reports also state that Coca-Cola has been named the worst company for plastic pollution, gathering about 11732 pieces of plastics worldwide (The Independent, 2019).

This could impact the brand image of the company and hinder their financial progress. Therefore, Coca-Cola needs to determine the targeted goals to endure its commitments. Coca-Cola being a global enterprise with more than 500 brands and 4300 products operates internationally (The Guardian, 2020). The company mainly contributed towards sustainability in developed nations such as the USA. Thereby, the goal of achieving 2030 SDG Agenda collectively is minimal but if similar programs are initiated in developing nations (The Guardian(a), 2014) such as India, the results would be more valuable. According to Statista, 2019, India’s estimated population is 1.4 billion, 22% of which lies below the poverty line (World Bank, 2019). Thus, it makes a perfect market for Coca-Cola to function towards the UN SDGs along with preserving its trademark and gain huge profits. Moreover, to pursue similar plans in India, Coca-Cola needs to guide its manufacturers, franchisee units, bottling partners and reduce license or overhead costs of its branches. This would encourage the proprietors to work towards UNSDGs and follow the principle ‘Act Responsible but think Sustainable’ recommended by ESS which I would address further. PROBLEM According to the World Population Review, 2020, India is amongst the worst polluted countries globally within an average PM2.5 concentration of 72.54. Minimum 140 million Indians are breathing air 10 times or more beyond the WHO safe limit (Financial Times, 2018). The outcomes are shocking, indicating that more than 4 in 10 Indians are vulnerable to airborne particles they breathe, which is 5 times over the safe level. A report implies that in 2017, air pollution killed 1.24 million Indians which lowered India’s average life expectancy rate by 1.7 years.

The Ganga and Yamuna are classified among the world’s most polluted rivers (Businessworld.in, 2020). According to Bloomberg, 2020 Indian cities like New Delhi, Kanpur got unduly affected by toxic air and water due to factors like industrial emissions & effluents, vehicular exhaust, garbage and agriculture burning. ALIGNMENTS WITH THE SDGs ‘Act Responsible but think Sustainable’ principle is closely aligned to SDG 11 which is ‘to ensure sustainable cities and communities’. By setting-up Coca-Cola industrial units in the outskirts of pollution free zones and adapting eco-friendly technologies, they could lower the pollution in India. The principle also addresses SDG 3 i.e. ‘ensuring good health and well- being’. By guaranteeing the health and safety of its workers and communities. Reduction in pollution level would help vulnerable people to be safe from airborne and waterborne diseases. At last, it addresses SDG 17 that ‘states partnerships for the goals’. By arranging tie-ups with government officials and other departments such as Indian Ministry of Environment and Forest, would help the brand fight against pollution for the well-being of its customers and surroundings. IMPLEMENTATION PLAN Stage 1 – Business Development and Goals – It is true that the problem of pollution cannot be eliminated but surely it can be minimised. Coca-Cola’s primary goal is to identify a set of different techniques and measures to reduce pollution and attain water and air quality standards (Appendix 1). For example, Coca-Cola has been hit by several pollution claims in India such as ground-water depletion in Varanasi (The Guardian(b), 2014), damaging the local environment by dumping waste negligently in the state of Kerala (ThoughtCo, 2019). Therefore, the first step towards a pollution free environment is to set-up Coca-Cola’s manufacturing and bottling units in the outskirts of environmental-friendly zones such as Tamil Nadu, Pondicherry (Kang, 2019). Establishing industries in such areas would have comparatively minimal impact on climate and heavily populated urban and residential areas (Appendix 1).

There are a number of environmental-friendly technologies that Coca-Cola can use in its factories such as Chakr Innovation i.e. world’s first retro-fit emission regulating device for diesel generators (Chakr Innovation, 2020) and Cellzyme Biotech (Cellzyme.com, 2020) which makes antibiotics at room temperature without using diluents. This results in a step further to reduce ecological footprints by substituting harsh industrial chemicals and conserving energy. Furthermore, Coca-Cola has existing programmes like ‘World Without Waste’ initiatives to tackle major problems that include pollution in order to achieve UNSDGs. These programmes are not 100% successful in many parts of the world including India. This has led to a disaster since millions die each year due to pollution, validated by WHO. One way to tackle the issue of pollution and concurrently making these programmes more efficient and effective is to improve the disposal process of PET bottles (Appendix 1). These bottles are either burned or disposed of in land and water by the consumers. Coca-Cola could create jobs for waste collectors, to ensure that each PET bottle is collected and disposed or recycled properly. This would improve the air quality, provide clean water in rural areas and create new jobs. Most importantly, this would help in enhancing India’s life expectancy rate and assure proper health and well-being of workers and societies. Stage 2 – Partnerships and Communication Strategy – The environmental situation in India is multifaceted. It is important to arrange tie-ups in the process in order for the information to reach all over India, hoping that everyone can benefit from it. Involvement of the government and other pollution control departments is must (Appendix 1). Government should make sure that each unit of Coca-Cola holds the CTE certificate. This would help to curb pollution level in India. Yet, Coca-Cola alone cannot fight the pollution level in India.

Therefore, it is important for them to partner with companies such as PepsiCo (Appendix 1) to make India cleaner and greener. Advertising these initiatives through media, campaigns, products will provide ‘perfect knowledge’ to the customers (Appendix 1). For example – Introducing campaigns like ‘For every Cola you buy, you plant a tree’ and changing the bottles to ‘green colour’ (Appendix 2), would create awareness and encourage people to plant more trees. Coca-Cola can also adopt P2 (Pollution Prevention) strategy by stimulating the use of electric or CNG cars for transportation of products (Appendix 1). The low carbon content would produce lesser evaporative emissions, thereby maintaining the quality of air in India. Stage 3 – Measuring Development and Feedback – The government must keep regular monitoring points for the Coca-Cola industries to ensure all the rules and regulations enforced are met like P2 Act. It is important to keep a track on how waste is being disposed of, what ingredients and chemicals are being used to make the product, to assess how well the sustainable changes have been incorporated. A constant direction from a powerful legal body would help to fill the voids in the business plan while making it more effective. A successful progress of the plan would be seen if all the measures are followed. Some of the challenges and barriers Coca-Cola may face in implementing these initiatives in India are: Environmental Coca-Cola has been criticised for its water management issue. Each product of Coca-Cola contains 90% of water. The company consumes large amounts of water from water-scarce regions which in turn leads to groundwater depletion and wastewater is improperly disposed into water bodies leading to water pollution. Coca-Cola should improve its water usage system to avoid criticisms from environmental authorities. Moreover, Coca-Cola encountered criticism because instead of concentrating on the primary issue of minimising plastic consumption, the company made large investments in recycling. For example: China said no to more plastic waste, demonstrating that one cannot eradicate waste by creating even more waste (Greenpeace, 2019).

The solution is to apply the nudge theory i.e. helping individuals to improve their thinking and decisions (Arno and Thomas, 2016). The company can increase its production volume of small cans rather than the plastic bottles. Reputational risk Achieving sustainability in India would require a strong action to reduce exposure to environmental pollution and contagious diseases. However, Coca-Cola has previously experienced negative publicity as they conveyed a wrong message of the company being sustainable and healthy. Water usage and packaging controversy has negatively affected the image of the company. High pollution level together with carbonated water contributed in a number of health-problems in India. Pandemic In the 2019 sustainability report, Coca-Cola is responsive towards the pandemic issue, COVID-19. This has been a challenge for businesses to financially progress at the same rate in all sectors. The global lockdown creates barriers for brands like Coca-Cola to smoothly perform its daily functions. Simultaneously, this outbreak has shifted customer’s focus on building a greater immune system. As a result, individuals who are fond of beverages like Coca-Cola would think twice before consuming it. Hence, Coca-Cola should take necessary and cautious steps to encourage the well-being of the citizens who are under the impact of COVID-19. Donations by the company can create an upliftment in the brand image. To make the ‘Act Responsible but think Sustainable’ principle and all other SDGs a reality, it would require the participation and hard work of every individual including the government, private sector, civil societies and citizens of India. In spite of everything, your 2019 sustainable report barely mentions pollution as a concern. Thus, it is crucial to endorse a more efficacious sustainable plan that would benefit the company and its customers. All things considered; we are looking forward to hearing your viewpoint on the significance of the SDGs for the world, coupled with any inquiries you have for us to take this conversation ahead. 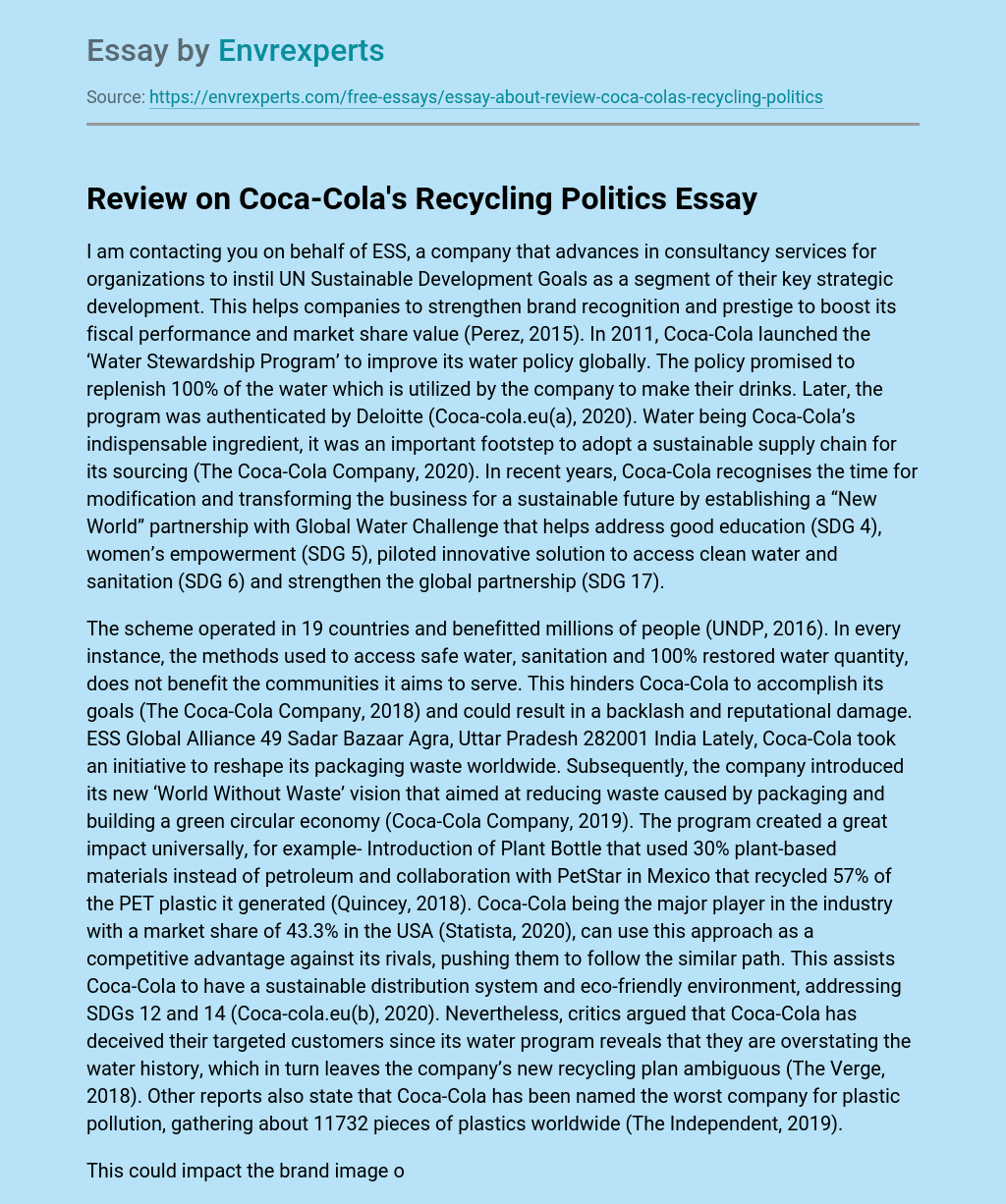