A Review of A Sand Country Almanac by Aldo Leopold

Although Leopoldis love of great expanses of wilderness is readily apparent, his book does not cry out in defense of particular tracts of land about to go under the axe or plow, but rather deals with the minutiae, the details, of often unnoticed plants and animals, all the little things that, in our ignorance, we have left out of our managed acreages but which must be present to add up to balanced ecosystems and a sense of quality and wholeness in the landscape.

Don’t waste time
Get a verified writer to help you with A Review of A Sand Country Almanac by Aldo Leopold
Hire writer
$35.80 for a 2-page paper

Part I of A Sand County Almanac is devoted to the details of a single piece of land: Leopoldis 120acre farmed-out farmstead in central Wisconsin, abandoned as a farm years before because of the poor soil from which the "sand counties" took their nickname. It was at this weekend retreat, Leopold says, "that we try to rebuild, with shovel and axe, what we are losing elsewhere". Month by month, Leopold leads the reader through the progression of the seasons with descriptions of such things as skunk tracks, mouse economics, the songs, habits, and attitudes of dozens of bird species, cycles of high water in the river, the timely appearance and blooming of several plants, and the joys of cutting onels own firewood.

In Part II of A Sand County Almanac, titled "The Quality of Landscape," Leopold takes his reader away from the farm; first into the surrounding Wisconsin countryside and then even farther, on an Illinois bus ride, a visit to the lowa of his boyhood, on to Arizona and New Mexico where he first worked with the U.

These dilemmas brought up in Part II make the Round River essays, inserted as the modern editionis Part III, titled "A Taste for Country," particularly apt, because this is the section of the book that deals primarily with philosophies. It is here that Leopold states that "poor land may be rich country, and vice versa". It is here that Leopold introduces the concept, radical then but widely accepted now, that the planet itself is a living organism and, through the natural cycles of earth, wind, fire and water, continually replenishes its own means of remaining alive. The human role in this "Round River" ecosystem is prominent, of course, and for thousands of years indigenous people depended directly on the bounty of this natural system to supply their needs of food and fiber. Although modern civilization has been forced by its increasing population to create artificial cycles, replacing elk and deer and grouse with beef and hogs and poultry, and replacing the oaks and bluestem grasses which fed the wild meat with corn and alfalfa.

And finally, Part III contains the essay titled "Goose Music," in which Leopold spells out his belief that the earth was fashioned by the Lord God, the Supreme Artist after whose works all the art of man has been initiated, and that every part of creation should therefore be held sacred. We may be able to live without the beauty of stars, sunsets, or goose music, Leopold says, but because we are unable to replace the natural things we destroy, we would be foolish to do away with something simply because we felt we did not need it.

The final pages of A Sand County Almanac, Part IV, titled "The Upshot," Leopold devotes to the concept of a "land ethic" and a plea that we adopt such an ethic into our daily lives. Leopold defines philosophical ethics as "the differentiation of social from anti-social conduct" for the common good of the community, and declares that a land ethic, wherein the ecologies in which we erect our developments would be considered an integral part of the community, amounts to the same thing as social ethics. A land ethic, in the authoris terms, means a "willing limitation on freedom of action in the struggle for survival". Leopold shows how human ethics came into being, first on a level between individuals and next on the level between individuals and their society, and states that the extension of ethics to include the environment which gives us sustenance is a logical and natural next step.

A Review of A Sand Country Almanac by Aldo Leopold. (2021, Oct 31). Retrieved from http://envrexperts.com/free-essays/essay-about-review-sand-country-almanac-aldo-leopold 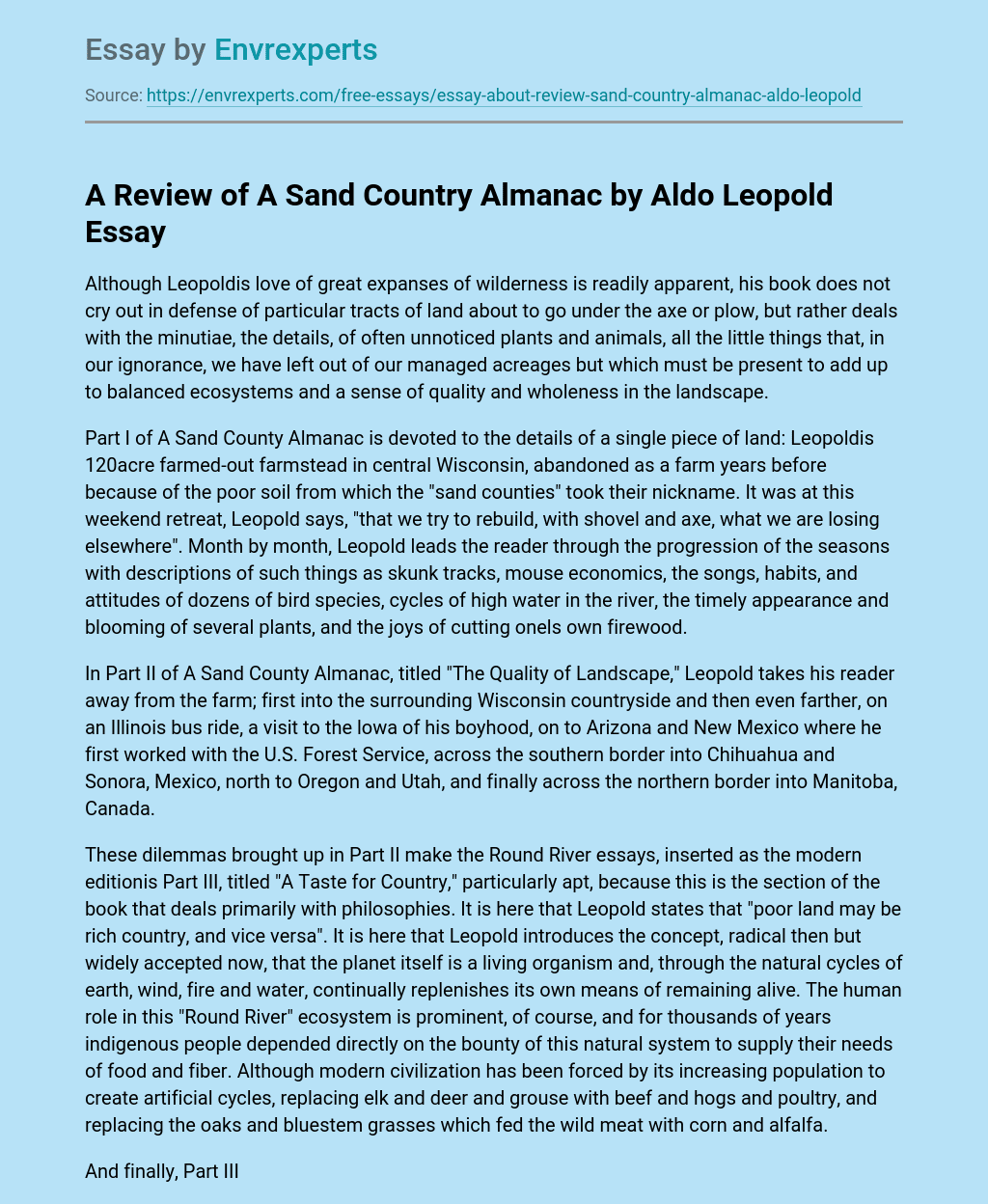