A Review of the Waste Management Scandal in 1998

In big businesses there are many ways that money can be laundered and accounts can be fraudulated. One of the most famous financial scandals occurred in 1998 by a large company, Waste Management.

Waste Management is is an “American waste management, comprehensive waste, and environmental services company in North America. Founded in 1971, the company is headquartered in the First City Tower in Houston, Texas." It is the largest waste management company in the U.S. A big part of WM's business revolves around sustainability.

Don’t waste time
Get a verified writer to help you with A Review of the Waste Management Scandal in 1998
Hire writer
$35.80 for a 2-page paper

From their EfW efforts to its landfill habitats, the company is greener than just its logo. It's also taken to reducing carbon emissions for its fleet of vehicle.

On March 26, 2002, the securities and Exchange commision filed a suit against Waste Management. The suit involved the founder and the five other former top officers of the company. According to the report, the suit charged them with perpetrating a massive financial fraud lasting more than five years.

The official statement reads; “The complaint, filed in U.S. District Court in Chicago, charges that defendants engaged in a systematic scheme to falsify and misrepresent Waste Management's financial results between 1992 and 1997. (Waste Management Founder, Five Other Former Top Officers Sued for Massive Fraud).”

According to the suit, Waste Management violated, and aided and abetted violations of, antifraud, reporting, and record-keeping provisions of the federal securities laws. The company is putting rules and regulations in order to prohibit future violations, disgorgement of defendants' ill-gotten gains, civil money penalties, and officer and director bars against all defendants.

Financial fraud occurs for numerous reason. These reasons could be lack of transparency, which means that the financial transactions are so complex that it is difficult to understand and fraud can be hid easily; another way is Poor management information, which is when a company's management information system does not produce results that are timely, accurate, sufficiently detailed and relevant. The top reason for people to commit fraud is greed. When people see the opportunity for a fast buck, they pounce on it. As stated by the complaint, "Defendants' fraudulent conduct was driven by greed and a desire to retain their corporate positions and status in the business and social communities," Newkirk said. "Our goal is to take the profit out of securities fraud and to prevent fraudsters from serving as officers or directors of public companies.(The 10 Worst Accounting Scandals of All Time)."

The complaint accuses the leaders of Waste Management had predetermined earnings and in order to meet those earnings they manipulated the company's financial results. According to the suit, the company's revenues were not growing fast enough to meet these targets, so defendants instead resorted to improperly eliminating and deferring current period expenses to inflate earnings. In order to do that, the leaders at Waste Management had to impose misleading accounting practices. The charges stated that the leaders avoided depreciation expenses on their garbage trucks by both assigning unsupported and inflated salvage values and extending their useful lives and they assigned arbitrary salvage values to other assets that previously had no salvage value. The leaders failed to record expenses for decreases in the value of landfills as they were filled with waste , they refused to record expenses necessary to write off the costs of unsuccessful and abandoned landfill development projects, established inflated environmental reserves (liabilities) in connection with acquisitions so that the excess reserves could be used to avoid recording unrelated operating expenses, improperly capitalized a variety of expenses, and failed to establish sufficient reserves (liabilities) to pay for income taxes and other expenses (Waste Management Founder, Five Other Former Top Officers Sued for Massive Fraud).

The Waste Management Scandal was built from the top down. Each leader in the Waste Management scandal had some special role that made the flow of financial fraud run smooth. The largest role was played by, Dean L. Buntrock, who is the Waste Management's founder, chairman of the board of directors, and chief executive officer. Buntrock was clever; he set "earnings targets, fostered a culture of fraudulent accounting, personally directed certain of the accounting changes to make the targeted earnings, and was the spokesperson who announced the company's phony numbers". The report states that Buntrock was the primary beneficiary of the fraud, about $17 million “in ill-gotten gains from, among other things, performance-based bonuses, retirement benefits, charitable giving, and selling company stock while the fraud was ongoing” (Scandal at Waste Management Risks Payout for Retired CEO." The Wall Street Journal). Overall, Buntrock was in charge of one of the worst financial scandals of all time.

In the Mid July of 1997, everything unraveled. Once a new CEO joined Waste Management, he ordered a review of the company's accounting practices. The review led to the restatement of the company's financial statements for 1992 through the third quarter of 1997 and showed that the company had misstated its pre-tax earnings, which totalled up to about 1.7 billion dollars. The penalties for this scandal were very steep. They settled a shareholder class action suit for 457 million dollars. The SEC charged Arthur Andersen 7 million dollars. The new CEO wanted to move past the scandal and learn from it. In order to do that he set up an anonymous company hotline where any employee could report dishonest behavior. Although, this scandal was one of the worst ever, it occurred in the late 1990s. Waste Management was able to bounce back from this scandal, and remains the largest waste management company in the U.S.

A Review of the Waste Management Scandal in 1998. (2021, Oct 31). Retrieved from http://envrexperts.com/free-essays/essay-about-review-waste-management-scandal-1998 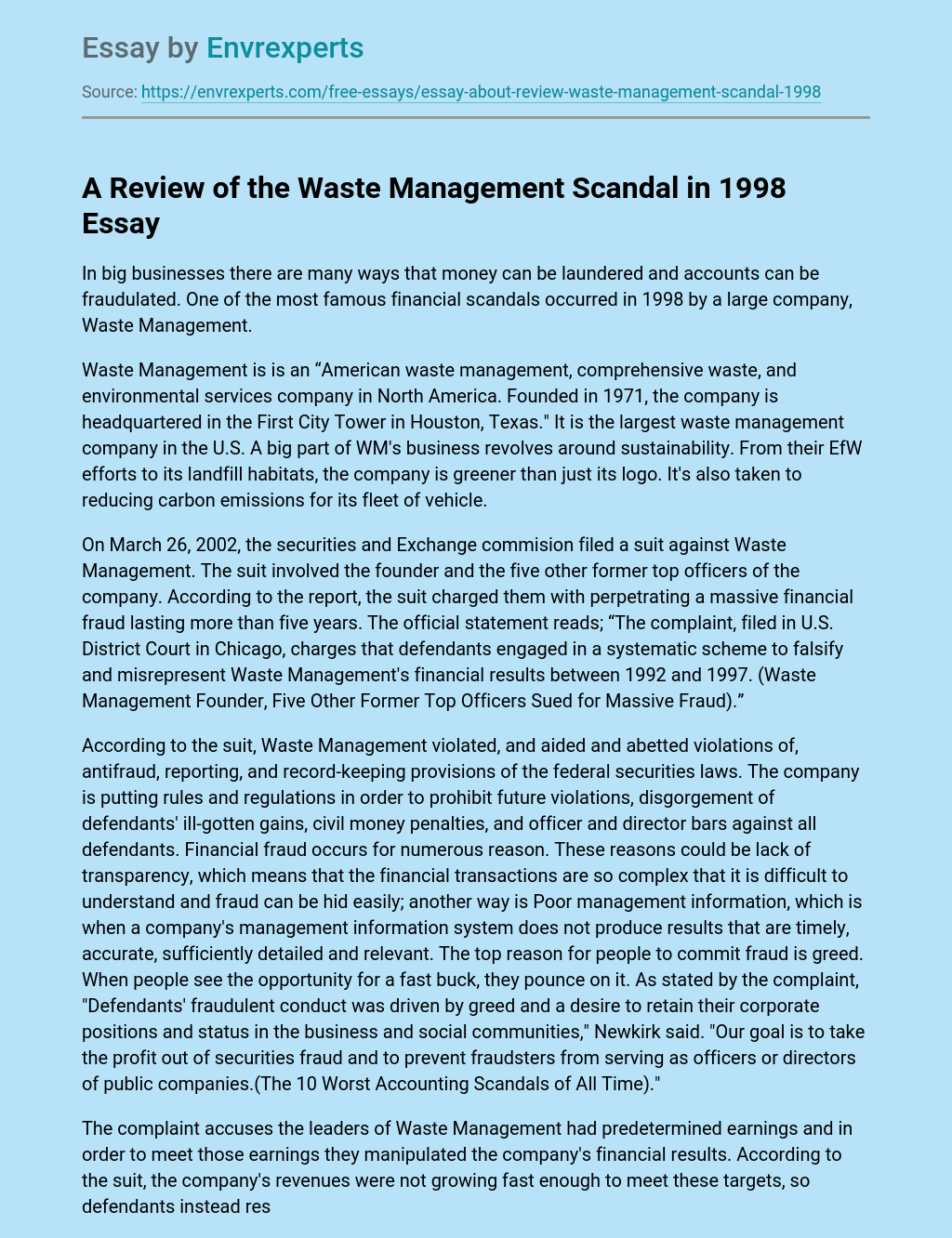