Role of Agrochemicals in Water Pollution

Pollution, whether it be in the air we breathe in, the water we drink from, or the soil where we grow our crops from is undoubtedly an aspect of our life, affecting the environment across the globe. What exactly defines pollution? It is the presence or introduction of a substance or thing that has harmful or poisonous effects on the environment. There are different types of pollution varying from light pollution, noise pollution, thermal pollution, radioactive pollution, and many other harmful ones.

Don’t waste time
Get a verified writer to help you with Role of Agrochemicals in Water Pollution
Hire writer
$35.80 for a 2-page paper

However, of all of them, pollution of air, water, and the soil are the primary concern to our existence and progress in life; nevertheless, water pollution will be the main focus of this research. The cause and effect of rising water pollution across the world, mostly in a geographical area with a dense human population or impoverished countries, experience difficulty in maintaining a healthy and progressive life. The introduction of water pollution into the human body can cause failure or permanently damage the respiratory system and cardiovascular system or introduce other diseases that can cause deafness, blindness, bacterial infection, and can lead to the development of cancer.

Most of these effects of water pollution come from various sources such as the inadequate disposal of industrial and human waste, and the usage of fertilizers and pesticides in agriculture. There has been an increase in the global population that is bringing in excessive use of natural resources and disposing of them irrationally, ending up in bodies of water. The rising of water pollution could bring in unfortunate consequences throughout various places in the world, bringing humanity in the future with an unstable society and higher mortality rates.

Although many solutions have been developed and implemented, the results are still the same, the water is polluted, and people do not care\nThe management of water is essential to our longevity and survival in life to live a long healthy, and peaceful life without worries; without it, humanity will perish within days from dehydration.

The main factor of water pollution is agricultural use of chemicals, despite there being many other important point-sources, this factor will be the main focus of the research. Because we have a high demand for food, our inability to control hunger can determine the level of pollutants that enter our waterways. Agriculture uses up to 70% of the world's accessible freshwater from rivers and groundwater, revealing the high demand for food production. However, some 60% of this is wasted due to mismanagement of water irrigation systems, leading runoff of contaminated water guiding itself into streets, storm drains, and water sources like ponds and streams, eventually into safe drinking supplies. These chemicals that are used in agriculture vary from nitrate, the most common chemical contaminant in the world\'s groundwater aquifers, and nutrients along with phosphorus that ends up accumulating over time, creating what is known as eutrophication, a green-like field of water-induced from excessive growth of algae. Due to the unavailability of water in some regions from severe water pollution, at many places, the land has become infertile and inadequate for agriculture use that limits crop productivity, which leads to starvation in some parts of the world.
These agrochemicals varying from fertilizers, pesticides, herbicides, and others have given rise to widespread contamination of waterways and ground waters, in turn affecting plants, wildlife, humans, and animals. Once they have been sprayed, they do not disappear completely, and the chemicals end up mixing with the water and seep into the ground while the plant itself absorbs the rest. As a result, the local streams that are supplied water from the ground become contaminated, as do the animals that eat these crops and plants. According to the Water Research Center, nitrate is an inorganic chemical that is highly soluble in water and is essential for all living things, but high levels of nitrate in drinking water can be dangerous to health, especially for infants and pregnant women. Additionally, according to the New Hampshire Department of Environmental Science, a high enough concentration of nitrate in drinking water can be lethal to infants, resulting in a temporary blood disorder called methemoglobinemia, commonly called \"blue baby syndrome.\" In severe, untreated cases, brain damage, and death can occur from the result of a lack of oxygen; some symptoms vary from headache, dizziness, vomiting, diarrhea, and blue-gray or pale purple coloration around the area of the lips, eyes, mouth, hands, and feet. On the other hand, the excessive richness of nutrients in a lake or other body of water (eutrophication) can cause marine life to suffocate due to the growth of algae, taking up all the oxygen for themselves, creating \"dead zones\" that are incapable of supporting life. Some of these villages rely on certain waters, and if these villages become contaminated, drinking water and crops will become scarce. Although we live in an advanced world with water treatment facilities, some developing countries do not have the luxury to own these facilities, and these chemicals eventually become suppliers of drinking water.

These ongoing activities using multiple agricultural-related chemicals could worsen future generations and lead to more cases of waterborne diseases. The chemicals that find their way to bodies of water provide life to numerous waterborne illnesses that have disastrous effects on humans. According to the Conserve Future Energy website, they state that waterborne disease is one of the leading causes of mortality in the world that inadequate sanitation can lead to deadly diarrheal diseases, including cholera, typhoid fever, botulism, giardia, leptospirosis, and other waterborne illnesses. Around 2-4 million people, mostly in Africa, die from severe cases of waterborne diseases due to a lack of proper medical facilities and training, impacting people\'s daily life who are living under poor conditions. Also, according to the CDC, they state that over 1.9 million children die each year from drinking unsafe water where they die because the water they are drinking causes diarrheal diseases that lead to poor nutrition and other problems. Unsafe drinking water is the second largest cause of child mortality worldwide and contributes to 15% of child deaths. The leading cause of this devastating disaster is due to the flow of ignorance around us, where the problem lies primarily with a group of people living in a more prosperous country. We as people living in a more technological, healthier, and wealthier lifestyle often overlook water pollution and its pollutants and mostly not care for those in despair because of the accessibility we have within our well-established community, not being self-aware of the reduction of earth\'s water supplies. For many people, they think to themselves that earth provides and recycles an unlimited amount of safe, freshwater for use and consumption, well, that is not the case. Most people around the world, about 41% live in river basins that are under water stress and due to some portion of being polluted.

There are many possible solutions to reduce pollutants that pollute water bodies caused by agricultural activities, including watershed efforts, nutrient management, cover crops, buffer zones, tillage management, livestock waste management, and drainage management. The collaboration between state governments, farm organizations, communities, and other institutions can play vital roles in improving water quality by helping each other rather than keeping a distant communication. Also, managing nutrients by adding the proper amount at the time of the year with the right methods can decrease potential runoff of nutrients guiding itself in lakes or rivers. Furthermore, planting certain grasses, clovers, or grains (cover crops) can help recycle excess nitrogen and reduce the eroding of soil. By combining buffer zones such as planting trees, shrubs, and grass around the fields, especially close to bodies of water, can help by absorbing and filtering nutrients before they reach the water. More importantly, reducing conventional farming methods (tillage) can reduce soil compaction and erosion, can also increase soil organic matter and reduce pollution runoff. Preventing animals\' waste from entering rivers, streams, and lakes help keep chemicals such as phosphorus and nitrogen out of the water, making the environment healthier. A solution for local communities would be investing in a more sustainable water drainage system, recycling and filtering out poisonous chemicals that help prevent the degradation of the water in local bodies of water. There are many other solutions for agricultural management in efforts to prevent water pollution, but these are the most meaningful and practical solutions.

Role of Agrochemicals in Water Pollution. (2021, Oct 31). Retrieved from http://envrexperts.com/free-essays/essay-about-role-agrochemicals-water-pollution 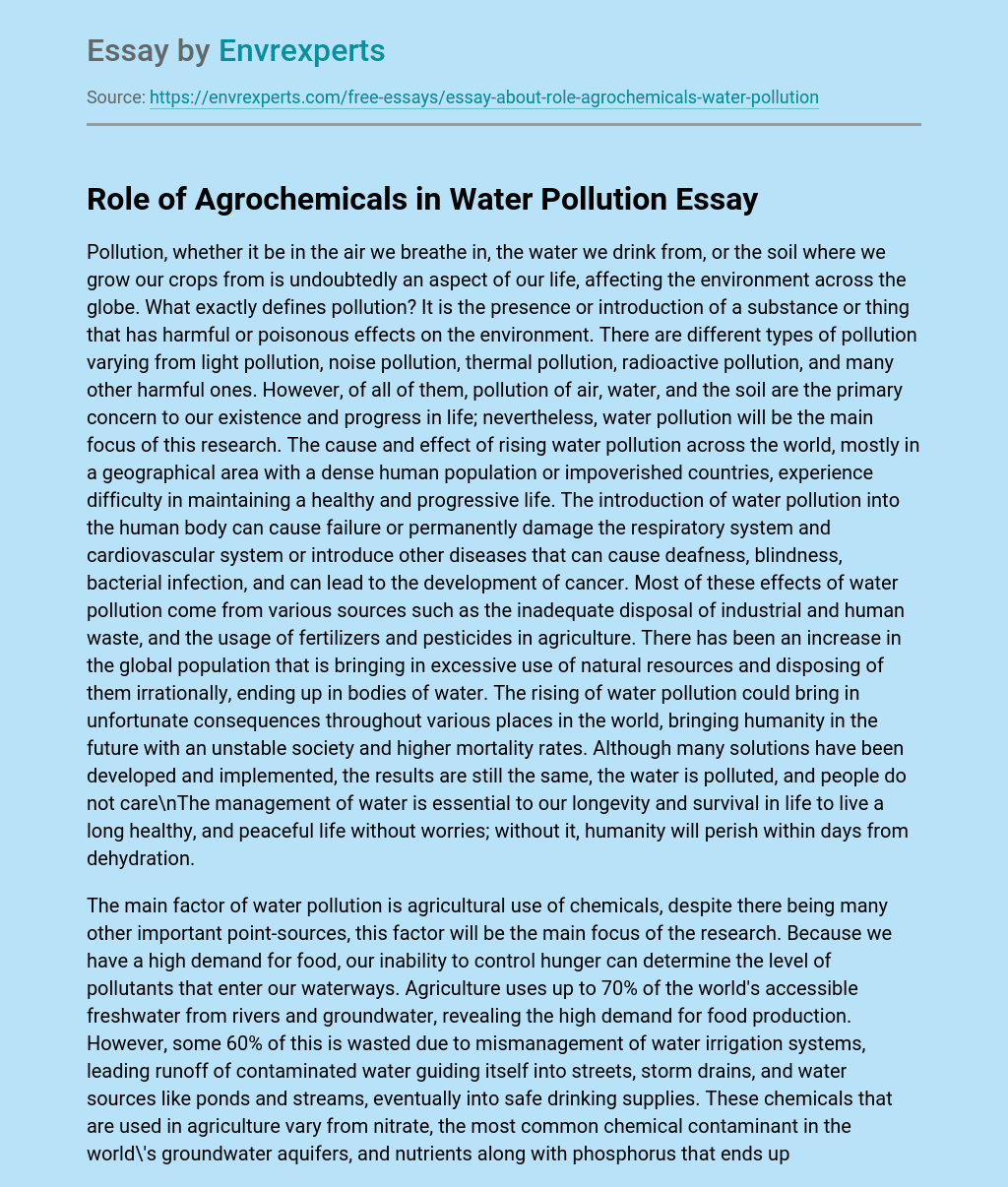