Role of Human in Air Pollution

Harmful effects of pollution caused by Human Activity Pollution is often defined as the introduction of a harmful substance into the environment. consequently, the harmful substances that enter the environment can be differentiated into articles in several categories. according to – Macmillan Social since Library, (2003) the article "Pollution" article the most common forms of pollution include air pollution, water pollution, and land pollution. in particular, the issue regarding pollution is the uncertainty among the sole producers of these toxic pollutants.

Don’t waste time
Get a verified writer to help you with Role of Human in Air Pollution
Hire writer
$35.80 for a 2-page paper

Michael Specter (2015), from "A Thirsty Violent World\" urged that human activity played a significant role in the issue of pollution. predominately. pollution has been caused by the advancement in our industrial growth and because there has been an increase in the human population size the standard of living is constantly improving also, that Rajendra parsed /2013/ from "Population growth food shortage and ways to alleviate hunger" has accumulated that the global population is expected 9 billion by 2050. with this being the case, the demand for the resource will continue to grow.

potential the causing of the industries to speed up production and the supply and need for certain products.

Although current industries work to make us believe that the rapid production of resources sustains and improve the lives of the human population, the consequences outweigh the benefits. people lack the knowledge that major production companies have a negative effect on the environment as a whole and that they are slowly causing an uprise to environmental degradation. beyond consumer goods, people do not recognize the truth within industrial companies.

and how unbelievably inefficient they are by sustainability and growth.

The quantity of the human population continues to increase natural resource industries are becoming responsible for the decline and disruption of animals. More specifically, Jasmine Li (2002), author of the Drop of Life" revealed that industrial wastes commonly contribute to water pollution and that major companies emit " 96 million gallons" of mineral waste daily P. 42). With regards to this water is the most critical component to animal survival and it is not only a source for consumption, but it is also home to many species. Inefficient mineral disposals are poisoning several innocent animal species through the careless act of releasing toxic chemicals into their environment.

Agricultural industries have become vital for maintaining world hunger in a growing population, and for this reason agricultural industries are ensiled to increase the rate of their production to meet the needs of a hungry society. Although it may seem beneficial in sustaining a growing population, humans are struggling to recognize that production contributes to land pollution, which can be significantly detrimental to plant life. for instance, framing a large number of consumable plants requires the process of land clearing. which can be problematic to the existence of other plants in a particular ecosystem (Prasad, 2013. p.32). With the introduction of new plant species, it can easily invade the area in attempts to overpowering other plants.

This causes the reduction of other natural plant species, and it can easily rapture an ecosystem permanently. Besides, the use of pesticides has become a common norm for the cultivation of fruits vegetables ( Prasad, 2013 P.33). pesticides are beneficial for the removal of pests, but on the contrary agricultural farmers are blinded by the idea that these chemicals contribute to both land pollution and water pollution. Even though pesticides are intended to protect vegetative products, the release of the chemicals not only goes onto the plant, but the excess product can be released elsewhere. Blankenberg, Haarstad, and Braskerud(2007) from the article. "pesticide retention in an experimental wetland.

Treating Non-point source pollution from Agricultural Runoff "acknowledged that the loss of pesticides to the environment could easily venture into the soil, causing the absorption of the harsh substance to several other organisms. Likewise, the incorporation of pesticides can eventually pollute several waterways including rivers, creeks, lakes, and ponds, which set forth to even more environmental damage. similar to pesticides chemical fertilizers like nitrogen, are increasing water pollution simply due to the overuse in crop production (Prasad, 2013, P.33).

Agricultural industries seem to look past the harmful effects of production on the environment. To meet the continuous demands of global hunger. yet it is very important that these industries become more familiarized with the pollution associated with crop cultivation, in order to fully understand the harm of their agricultural practices. If they are more aware of the issue, then they can find better cultivating alternatives to reducing the issue of agricultural runoff. In the more developed economies societies are depending highly upon power plant industries to support their demands for electricity. but conversely, power industries disturb human health immensely. Rebecca Clarren (2005) from "Dirty politics, Foul. Air", indicated that electrical power plants are one of the main producers in regards to air pollution, simply due to the release of sulfur dioxide and nitrogen oxide particles. the release of these toxic chemicals, trigger human health issues and diseases that include asthma emphysema bronchitis, lung cancer, heart arrhythmia, and heart attacks.

Finally, due to the rapid increase in human population growth pollution has been a revolving issue through several generations. and in regards to this humans and leading cause for the contamination of the environment. furthermore, it is recognized that not only does pollution hurt. the environment, it becoming a serious issue as it is affecting plants, animals, and humans as well. production companies across the world should take into consideration the long-term negative factors associated with the production, as well as the disposal of waste reduction for the sake of preserving the health of our environment as a whole.

Role of Human in Air Pollution. (2021, Oct 31). Retrieved from http://envrexperts.com/free-essays/essay-about-role-human-air-pollution 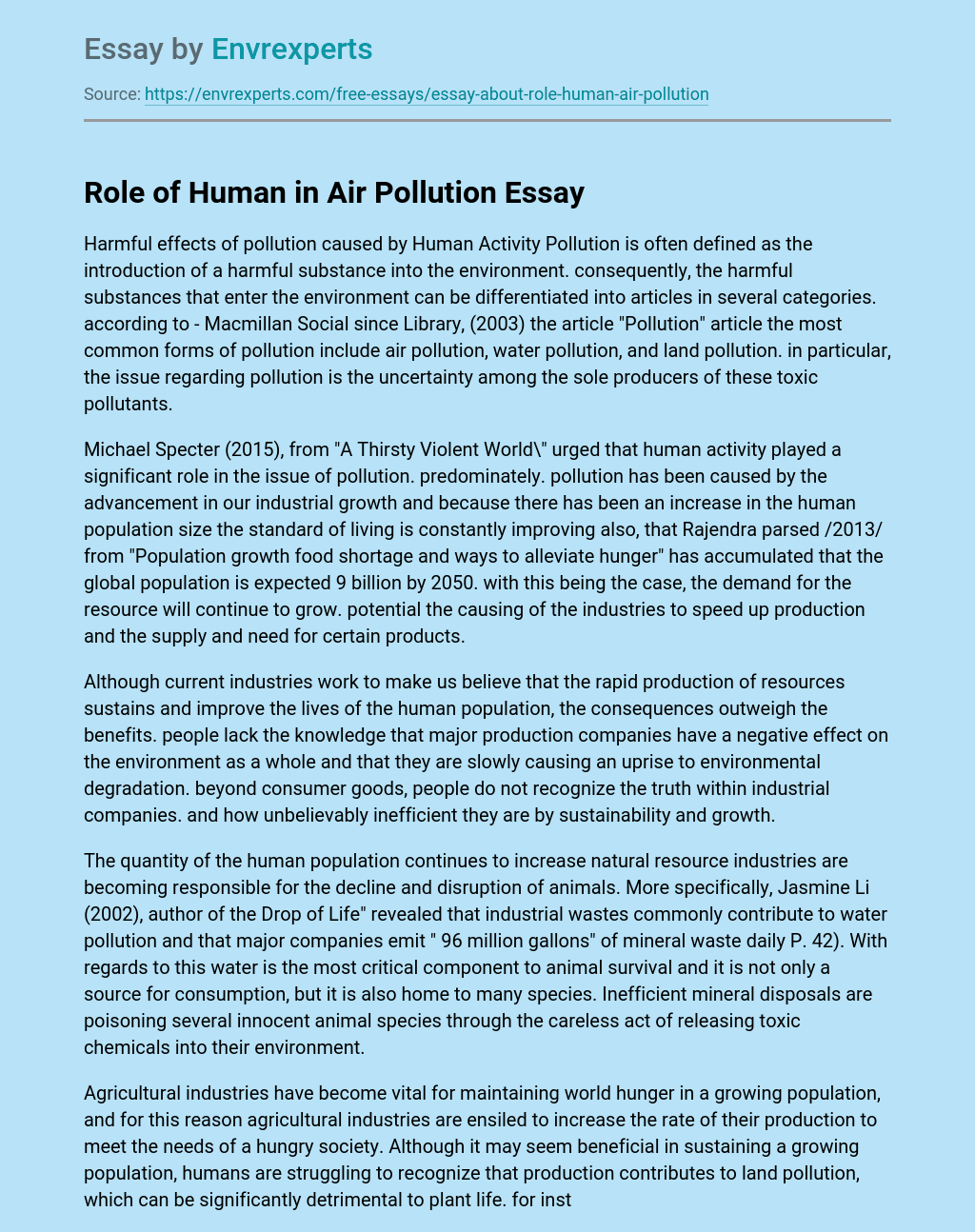