LiPari Landfill is just one of 115 landfills and hazardous waste sites in New Jersey. LiPari is a fifteen acre municipal and industrial waste landfill first opened in 1958.

LiPari Landfill is located in Mantua Township, New Jersey. Mantua is a small town in South Jersey neighboring Pitman Township and Glassboro. The landfill is bordered by the Zee Orchard on the north and the west and a housing development on the northeast. Numerous lakes, streams and marshlands are in close proximity to the landfill.

Don’t waste time
Get a verified writer to help you with Role of LiPari Landfill in Environment Protection
Hire writer
$35.80 for a 2-page paper

The Kirkwood aquifer, which lies beneath the ground, provides the groundwater for drinking water supplies that nearly 11,000 people in a three mile area depend on.

Nicholas LiPari first bought the land in 1958 to excavate a sand and gravel business. Soon after excavation began trenches appeared. Lipari allowed local municipalities and Burroughs to dump household solid waste, liquid and semi-solid chemical wastes, and other industrial materials. Records were not kept, but it is estimated that roughly three million gallons of liquid wastes and 12,000 cubic yards of solid waste were deposited on the site.

Dumping continued for a fourteen year period, beginning in 1958 and continuing through 1971.

Out of over 700 ranked sites, LiPari is listed number one (1) on the National Priority List (NPL), a list created to rank all landfills and hazardous waste sites identified as particularly dangerous. Due to its high concentrations of hazardous wastes, toxins, volatile organic compounds (VOCs), LiPari Landfill was first proposed for NPL listing on October 10, 191 and was granted September 8, 1983. Groundwater, surface water, sediments, and air are all contaminated with VOCs such as Bis (2choroisopropyl ether, toluene, formaldehyde solution, and benzene.

Methylene chloride, phenols, as well as other toxic organics contribute to the degradation of a vast ecosystem that once flourished in the area. Chromium, zinc, lead, arsenic and nickel as well as beryllium have all been detected in leatchate. Toxic leatchate has penetrated into the Kirkwood aquifer, Chestnut Branch Stream, Rabbit Run Stream, Alycon Lake, as well as other low lying marshlands.

The site poses a tremendous impact to the community. To date only one explosion and two major fires have been reported on the site. The explosion and the fires sent particulates, toxins, and fumes all over the area. As you approach the site along State Route 55 you encounter a pungent retched stench that is almost nauseating. Of course, the stench is coming off the landfill. Right? Actually some of the land and surrounding sediment and soil is so polluted you can actually smell the toxins. So, not only does the dump have a horrible odor, but the grounds outside the dump contribute to the odor. The noxious odor is one immediate impact of the site.

The landfill's presence is felt even greater as you start to tour the outlying areas. Only a small trickle of water can be seen passing through the Chestnut Branch Stream and Rabbit Run Stream. The Chestnut Branch Stream was, at one point in time, a large tributary to the Delaware River. A former family gathering area and swimming hole has also been lost to to toxic contamination flowing from the LiPari landfill. Alycon Lake, a four square mile lake, is 800 feet downstream from the landfill. All aquatic life has since died and the sediment is so toxic that entrance into the lake is strictly prohibited for "safety considerations". A study of a nearby marsh found astonishing levels of toxins in the area. Bis (2-chloroethyl) ether at 120 ppm, methyl isobutyl ketone (83 ppm), acetone (51 ppm), phenol (28 ppm), toluene (16 ppm) and methyl ethyl ketone (9 ppm) were all present.

Neighboring towns feel that they are at an extreme cancer risk. In fact, local townspeople have reason to worry. A 1989 study, conducted by the New Jersey Department of Health, found excess rates of leukemia in adults and low birth weights among newborns living around the site. The numbers for the leukemia study were low (three were expected, they found six) so the study could not verify with certain that the site was the cause for the extra cases of cancer. They were unexplainable though. The low birthweight evidence is stronger and implicates the landfill with statistical significance. For many years people used the site as if it were a park. Children played on the "hill", motorcross bike trails were carved, joggers and hikers could often be seen transversing the area.

Due to all the activity on the "hill" and swimmers who trespassed for swimming or who consumed fish from the lake, many more cases of cancer and low birthweights are likely to arise. In 1982 a fence was put up around the landfill to keep people from trespassing and the site was capped with a plastic cover (11 years after it closed).

Remediation of the superfund site has begun. It will take much longer to clean up the mess than it did to create it. The Environmental Protection Agency has derived a four stage plan to remedy the site. Stage one focuses on initial actions while stages two, three and four focus on source control, groundwater and leatchate cleansing, and off-site cleanup.

Stage 2 – EPA determined that an underground water cut off wall around the area and a landfill cap with a synthetic membrane cover would be useful in containing any further seepage or migration of pollutants. This phase was completed in 1984.

Stage 3 – in 1985, the EPA selected a remedy to clean up the groundwater and leatchate from the landfill. The process included installing extraction and injection wells within the landfill pumping system to flush the system and pump the contaminated groundwater and leatchate through a series of purifying devices. A sewage treatment plant was built on site. Wells were installed in the Kirkwood aquifer to monitor leatchate into the aquifer. The extraction and injection wells as well as the treatment plant were completed in 1993. As of August, 1996, 24 million gallons of contaminated groundwater and landfill leatchate had been treated.

Stage 4 – Off site contamination includes the sediment of lakes and streams as well as soil of outlying area. Groundwater and leatchate outside the containment system was to be collected and treated with a system of wells that were installed for purification purposes. EPAs stage 4 remedy called for contaminated sediments from the Chestnut Branch Marsh, from Alycon Lake, Chestnut Branch Stream, and Rabbit Run Stream, to be dredged and dewatered in order to remove the pollutants using a low temperature volatilation system (LTVS). All soil and sediment was to be place on an old race track. 57,000 cubic yards of contaminated soil from the marsh along with 81,000 cubic yards of sediment from Alycon Lake and the streams were excavated, treated with LTVS and placed on the race track. All areas were backfilled with clean soil. An additional 14,000 cubic yards of sediment from nearby marshes was expected be cleaned the same way. This process stage was to be completed by 1997. The cost of remediation is estimated to cost over $21,000,000.00

LiPari Landfill is just one example of out of control mindless pollution. It does not segregate; it reeks havoc on the health of everyone. Cancer cases are expected to increase, low birthweigths are at an increasing rate, our parks and lakes are to sick to play in. The area will not return to its former self unless remediation continues and is highly monitored. It is my hope that all the clean up efforts are worthwhile and we can put a price tag on this particular ecosystem. 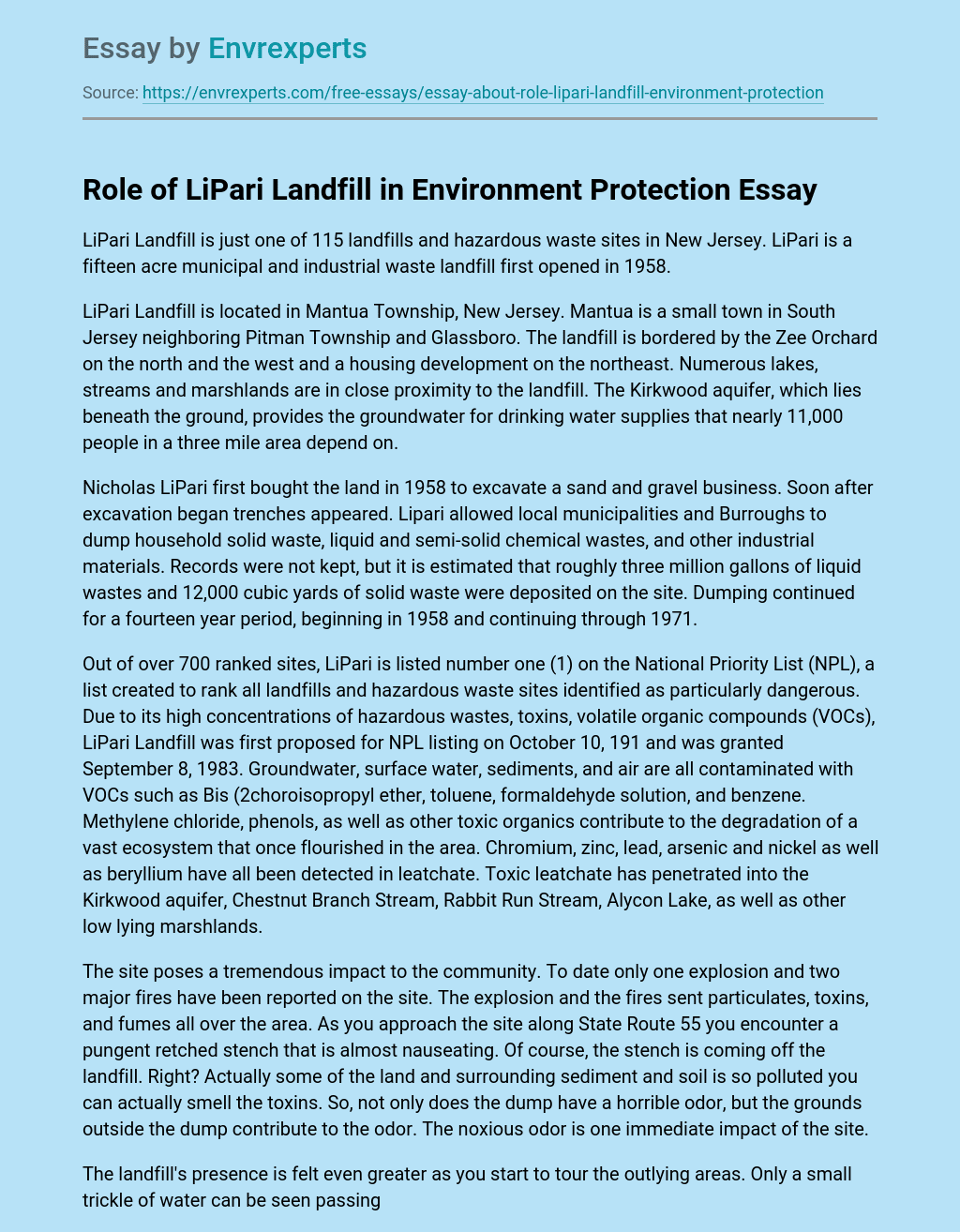