Role of Natural Resources in Our Life

Mankind has perpetually been dependent on the earth\'s natural resources since the very beginning of their existence in the natural world. Essentialities including oxygen, water, and food are fundamental not only for the survival of the human race but for the majority of species living on earth as well. Yet with such a crucial impact these resources have on human survival, their importance gets taken for granted as society continues to revolutionize itself with the production of more technology, food products, and other utilities consumed and exploited by humanity.

Don’t waste time
Get a verified writer to help you with Role of Natural Resources in Our Life
Hire writer
$35.80 for a 2-page paper

In Elizabeth Browning’s (1860) Victorian poem “A Musical Instrument”, such humanly acts of carelessness and their effect on the natural world is demonstrated by a greek god through his reckless destruction of a river within a forest, a narcissistic mindset he portrays and the enduring outcome of his foolish behavior with its detrimental effect on the surrounding environment. Demolition of the earth\'s forestry serves various purposes in society, including deforestation of trees to produce paper and clearcutting land to build commercial buildings and neighborhood complexes.

However, it is this same destruction of forests that also destroys oxygen supplies from trees, other organism\'s natural habitats, and those organisms themselves including insects and animals. In “A Musical Instrument”, a god presented as half-human half-goat named “Pan” is described to be disrupting a river within a forest when he tears out its reed, breaks the floating lilies on top of the water and causes a disturbed dragonfly to flee from its natural habitat (Browning, 1860).

Pan used this torn out reed as material to help him create a flute-like instrument in which he would later play alongside the river (Browning, 1860). This great god’s action of tearing up the earth\'s natural resources to produce an instrument reflects the damage of forestry in today’s society, and it’s intent to manufacture products from nature as well (Browning, 1860).

Although Pan’s rationale for tearing out such reed from the bed of the river is understandable, the careless way in which he does it is not (Browning, 1860). Neither Pan or humanity of today have been mindful enough when extracting natural resources from the earth, and this destructive behavior has ended up negatively impacting other organisms in the natural world (Browning, 1860). The consequences associated with Pan’s negligent actions including broken lilies, a disturbed dragonfly and water that now flows “turbidly”, displays similar consequences derived from how society treats nature, including the killing of plants, insects, animals, and damage to their habitats (Browning, 1860). Predominantly in more developed countries, people have become accustomed to the luxury of having a variety of products to purchase from that are for the most part, always readily available. But because of how normalized this way of living has become, society now takes advantage of such luxuries, which has resulted in damage to the earth’s atmosphere including pollution and littering. This 21st-century lifestyle has caused many to not only become selfish with their wants but to lack consideration of the limited resource supply this earth has to offer. Pan’s actions of tearing out reed to build a musical instrument for himself not only revealed his careless attitude towards the environment but the selfish mindset he possesses as well (Browning, 1860). After assembling this instrument, his egotistical self then began to laugh as he mentioned that only gods that make “sweet music” are successful (Browning, 1860). Pan’s careless laughter and the blunt remark he makes about what determines other gods\' success, exposes his narcissistic way of thinking by indirectly stating how he is successful because he\'s a good that makes sweet music (Browning, 1860). This “great god” shows no acknowledgment or appreciation for the surrounding environment he’s present in and is only concerned about the songs he\'s singing about himself, that declare how “sweet” of a god he supposedly is (Browning, 1860).

The same lack of gratification Pan has towards nature\'s resources, reflects the same careless attitude most of today’s society has towards the natural environment (Browning, 1860). Over usage of plastic water bottles, car pollutants and the littering of garbage throughout the natural world, are just a few of the many examples that demonstrate how humans can be selfish towards the earth. A common reason for such pollution shown by humanity is the convenience it brings them. For instance, throwing garbage on the sidewalk instead of putting it in the garbage bin or driving a car every day as opposed to sometimes walking instead, are both selfish actions that many choose to take part in, because of how easy and convenient they are. Humbleness and gratitude that both Pan and majority of society fail to have, has resulted in careless destruction within the natural world, that sadly, can\'t always be undone (Browning, 1860). It is unfortunate how much of a negative impact abusive human behavior can have on the earth\'s environment. Irreversible climate change and the extinction of many different animal species over the years, both prove how careless human activity can lead to permanent outcomes. Towards the end of Browning’s (1860) literature piece, it is mentioned how the reed plant that Pan tore out, never grew back again. Although the music that Pan produced brought nature back to life when the lilies revived and the dragonfly flew back, the reed that he tore out never restored itself (Browning, 1860).

The significance of this reed plant dying for eternity represents the damaging corruption that takes place in society, and how it has the potential to cause inevitable results that are enduring for the rest of the earth\'s existence (Browning, 1860). Pan was so busy at solely focusing on building his beloved instrument and producing music out of it, that he never took a moment to think twice about his actions and the potential risks they may cause (Browning, 1860).

This same principle reflects the world of today, and how society becomes so caught up in work, school, or just life in general, that a lot of people do not give their actions a second thought or truly realize the damaging outcomes that can arise from abusing the earth\'s natural resources. It is so crucially important for all of society to understand how much of an impact certain behaviors have on the health of the earth. Humanity as a collective whole has to become more effective in advocating not only for natural resources but for all other organisms that share the planet with them as well. Pan exhibited such ways of why it is so vital for humanity to be more mindful of their actions, through his reckless destruction of reed, his possession of a selfish mind, and the devastating outcome of his careless actions that had an everlasting effect on the reed plant in the bed of the river (Browning, 1860).

Role of Natural Resources in Our Life. (2021, Oct 31). Retrieved from http://envrexperts.com/free-essays/essay-about-role-natural-resources-our-life 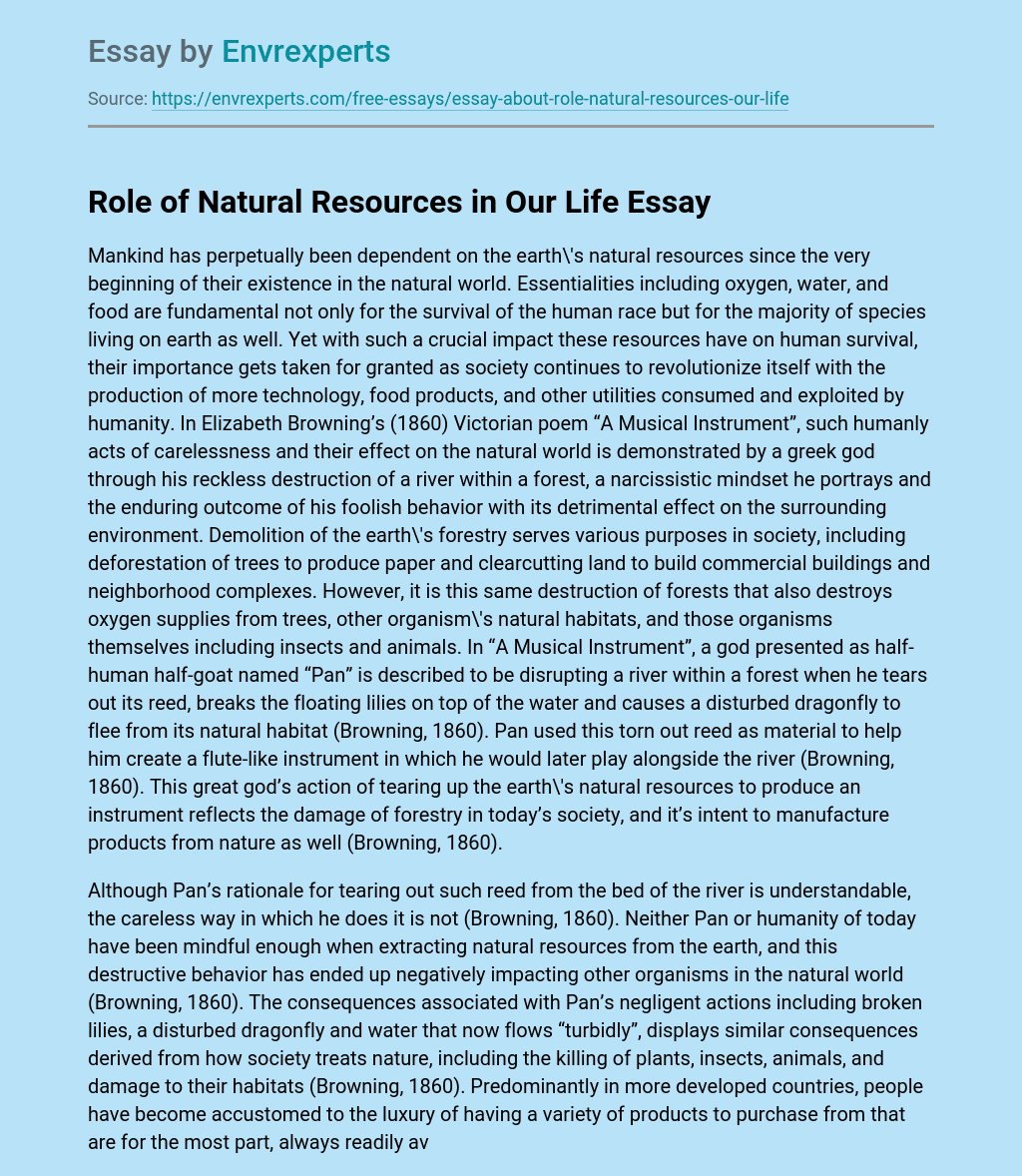