The Role of Religion in the Genocide of Native Californians

What is Religion? it is explained as one's belief in supernatural power. This power comes from creators and rulers of the universe. It is a personal or institutionalized system based on a set of beliefs, values, and practices that is based on teachings of a specific spiritual leader. This definition of religion is presented in major religions in the world. Judaism, Christianity, and Islam are also known as the Abrahamic religions because they can be traced to their history of the covenant God made with Abraham from the Hebrew Bible.

Don’t waste time
Get a verified writer to help you with The Role of Religion in the Genocide of Native Californians
Hire writer
$35.80 for a 2-page paper

Religion is one of the most driving forces behind many significant events that have molded our world. Throughout the centuries, laws have been enacted; cities, countries, and states have been created and destroyed for religious purposes. Wars have been fought, all to spread and to protect the belief of one's religion. Spaniards used religion against the native Californians as way to justify genocide to spread their religious belief across the new world through establishing missions, bring diseases, and cultural changes.

When the Spaniards arrived in the Americas, they did not consider the people that inhabited the land as equal. Spaniards thought that indigenous people were different in many ways such as: that their skin was darker than theirs, their languages were foreign, and they couldn’t understand it. That their concept of spiritual beliefs was beyond most white men’s understanding. All this stoked racial hatred and fear towards native Americans made it easy to paint them as savages.

Religion was the focus that drove the Spanish conquest in America to convert native Indians to their true religion. Spaniard saw native Indians as less than humans and more as savages. In order to make them like one of them they believed that baptizing could save their souls from pain. Spaniards thought this was an act of peace and love towards the native Indians. From the settler\'s view, they thought that if the native resisted it was a sign of the devil and that killing them was a way to save them.

Settlers brought unknown disease with them to the new land, causing the native American to have any immunity to them. The most common disease that was killing native Americans was smallpox. Smallpox was highly contagious because of the blisters that broke out on an infected person. “Because each of those blisters is packed with smallpox particles, then if you burst a blister, fluid will come out and large numbers of viruses will be spilt onto whatever it touches. Ten to twelve days later, his friends would be taken ill, and then ten to twelve days after that, their friends. That kind of rate means the disease spreads exponentially (Dr. Tim Brooks). Indigenous people died of disease, and were killed by Spaniards through slavery, rape, and war. Native Californian must have to been converted into Christians before they were to be consider as normal humans in the new world. Conversion to the new religion brought social barrier and disrupted lifestyles for indigenous people. That did not stop there, Spaniard also made the newly converted indigenous American work for them by building new modernize cities, they also worked in the fields of agriculture. With the help of Junipero Serra the Spaniards were able to establish the missions. Junipero Serra was the father of the mission because he was the founder of all twenty-one mission throughout the new land.

Junipero Serra was a priest for the Spaniard and he founded most of the missions in California. Junipero Serra established his first mission in San Fernando in May 1769. Moving further south, he founded another mission in San Diego, he then went on creating the first of nine missions in California. Junipero Serra went on to spend the rest of his life by devoting all his work in the churches and to his evangelical work in the missions. Junipero Serra's ideal mission was to spread the teachings of Christianity by forcefully converting native Indians to noble people. While sierras religious methods to convert Native Americans sometimes caused a clash with his own government. Junipero would clash with the Spanish military over the way soldiers treated the native peoples. Junipero Serra would also advocate for the native Americans so that way they could trust him. In his sermons he would use Psalm 33, "Taste and see that the Lord is good. "To say that God is like a culinary sweet, a piece of candy. That if you've never tasted it, you don't know what you're missing. But once you taste it, you acquire an increasing desire for it (Reese, Thomas). That's how Junipero thought the conversion process was going to work.

Serra abused his power and used his own religious method to justify his behavior by supporting the use of corporal punishment for offenses against natives American that would refuse his teachings. Although Junipero was father of the mission, Junipero did not mean any harm to the native Indians. All he wanted to do was help new natives from the Spanish control over them, but his actions show differently from the perspective of the new native American. Today Junipero is being award for his work as the father of the missions by pope Francis even though Junipero brought violence and cultural destruction to natives Indians to spread and cleanse them for not being as equal.

Native Americans came to mission for variety of reasons, such as that Spanish diseases. “Many came because of the rapid environmental degradation, caused by invasive species brought by the Spanish, dramatically changed the environment and traditional societal structures (Milliken, Randall). As Native food sources became more unavailable and as diseases ravaged native communities, the missions presented an option in a time of great upheaval. There were many other Indians that arrived at the missions seeking a reliable food supply. Once Indians converted to the religions by baptizing, Spanish soldiers sought out to forcefully keep the native Indians in residence of the missions. In these missionary native Americans would work for the settlers under the watch of the military and the priest. The missionaries influence is ambiguous: On one hand, they were the suppressors of Indian identity; on the other hand, they destroyed Native Californian cultural reevaluation. This ongoing conflict brought tension to native Californian leading some to run away.

A typical day in a mission consists of general labor up to seven hours and three hours of praying with the priest. The missionaries did not respect the aspect of native religion and were not allowed to practice their old spiritually belief. Native Americans who had entered into the mission communities through baptism were not allowed to leave without permission The priest in the missionaries forbade that and if the native Indian where caught they would be flogged, be hobbled, or be placed in stocks as punishment. One form of resistance that worked for the native Indians that lived in the missions, was that some learned how to camouflage their paintings. These painting are symbols of spiritual god and native Indians drew their own gods of worship so that they can still remember parts of their lives before the colonizers arrived. They would eventually paint over their drawings with paint so that the Spaniard would not find out. It is only sacred to other native American that had worked at that mission. Since there were different groups of native Indians in the mission it would be difficult to translate theses meaning if you didn’t belong to one's tribe.

Spanish colonizer forever changed the Native Californian cultures through genocide by introduction them to their religion, making them convert to Christianity and bringing disease to the new world. Although the Spanish missions and Junipero Serra impacted native Californian forcing them to give up their lifestyle it still could not erase them. Native people are central to contemporary life. They own businesses, hold political offices in many states. Work as public servant. With everything that happened to their ancestor, many continue to follow pre-colonization cultural traditions. Elders teach the younger generations how to grow plants to make traditional foods and basket weaving materials. Till this day generations of families continue to dance and sing in ways that long predate Spanish colonization. Where the thread of memory has broken, native Indians are reviving traditions through research and practice.

The Role of Religion in the Genocide of Native Californians. (2021, Oct 31). Retrieved from http://envrexperts.com/free-essays/essay-about-role-religion-genocide-native-californians 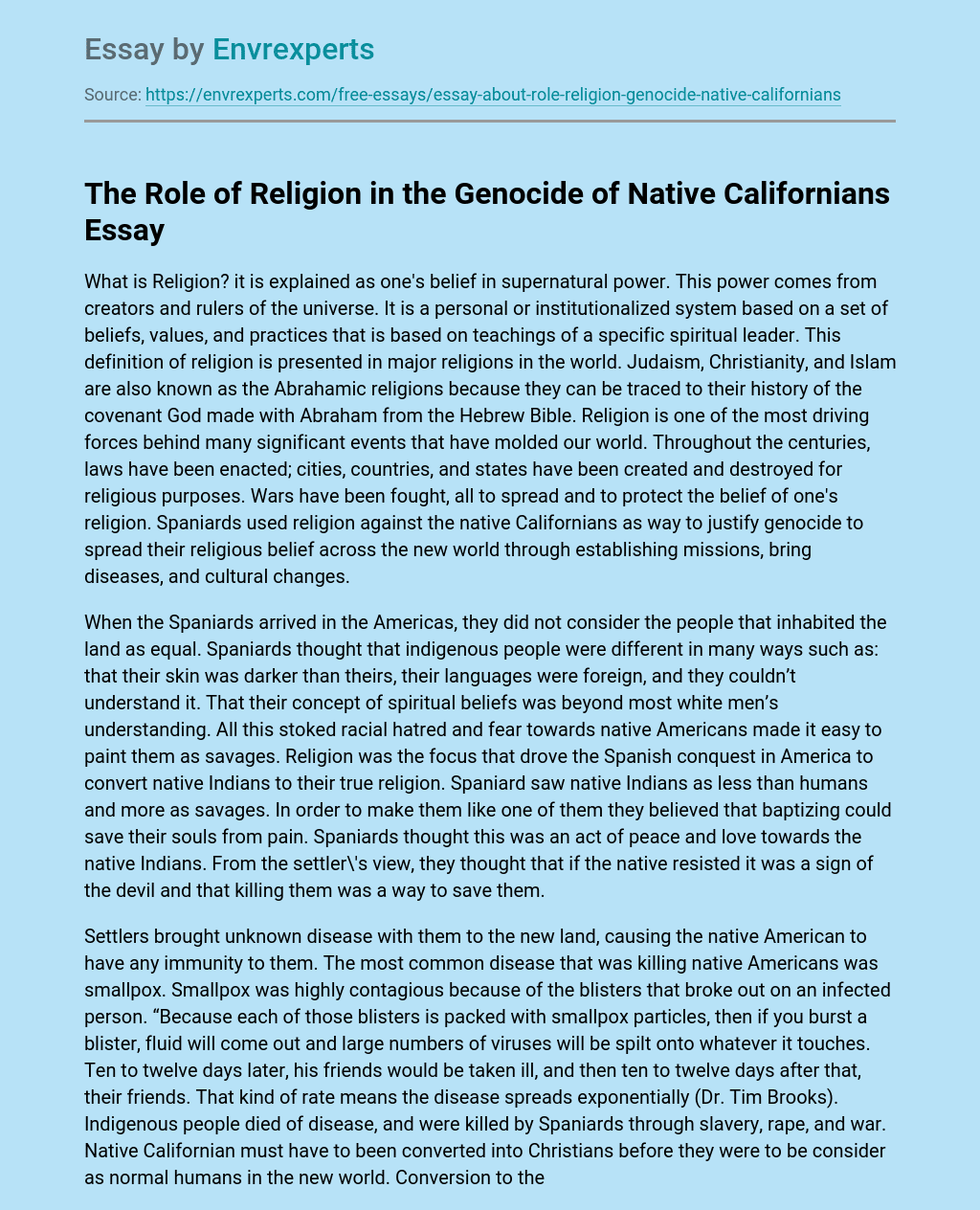