Who Cares? It's Just an Animal: The Importance of Saving Our Fauna Pizza is the saddest polar bear in the world. Pizza is confined in a tiny aquarium located
at Grandview Mall in Guangzhou, China. His only interaction is with the flashing lights and obsessive eyes of tourists. His walls are painted with a dark shade of blue in an attempt to make his small cage look like his real home, the Arctic. Pizza does not know what sunlight or fresh air feels like.

Don’t waste time
Get a verified writer to help you with Saving and Protecting the Fauna through Conservation Projects from Overexploitation Which Leads to Extinction
Hire writer
$35.80 for a 2-page paper

Unfortunately, being in such solitude has caused detrimental effects on Pizza's mental health. He has begun to sway his head, pace back and forth, and stare at the wall as an "attempt to cope with stressful, aversive situations such as barren enclosures, boredom and constant disturbance by visitors" (Schelling 2016). After seeing Pizza's mental health deteriorate, the owners have decided to relocate Pizza into another marine park, where his parents live. Advisors believe that living with other bears will improve Pizza's health.

Unfortunately, Pizza is not the only animal that faces these issues. Various species are being captured and showcased for human entertainment. Many animals are trapped in zoos, circuses, or trucks, constantly shipped to other locations. Although some places may give these animals adequate care, wild animals are not meant to be placed in a cage. Unless the animals were captive-born, they do not belong in captivity. To stop wild animal domestication, the government must strengthen enforcement, the people must protect the land, and the people should place animals in a proper habitat.

The globalization of trade has allowed for easy access to illegal wildlife trafficking. Illegal Wildlife Trade(IWT) threatens our wildlife to extinction. The extinction of a species can disrupt the balance of the food chain and deeply affect our lives. Extinction will cause a butterfly effect: a prey disappears from the food chain, and the predator will soon have to find new food, or they will disappear also. Keep in mind that humans are part of the food chain. Animal extinction will undoubtedly impact human lives. For example, honeybees are now endangered species and if they go extinct, our crops will experience detrimental effects. In addition, trafficked animals are tortured either by being brutally beaten or being starved to death.

Slaughtering mercilessly or killing for enjoyment must cease. Humans must also realize to what extent they need the animals for and to ponder if killing the animal is really necessary. Furthermore, wildlife trade is caused by public demand. Overexploitation—the killing or harvesting of wildlife at rates faster than the animals can repopulate—is huge problem due to supply and demand. Overexploitation could eventually lead to extinction. The more an animal(or a part of an animal) is demanded, the closer it is to extinction.

Strengthening enforcement could help prevent the killing of innocent animals. Enforcement on wildlife trafficking and slaughterhouses must improve. Weak enforcements allow for illegal wildlife trade to happen. The lack of enforcement or seriousness that an enforcement agent, judiciary, or prosecutor has, the more likely the criminal will get away with the illegal trade. According to Steven Broad, Executive Director of TRAFFIC the Wildlife Trade Monitoring Network, “the penalty of illegal cross-border movement is usually simply forfeiture of the goods without prosecution or other penalty” (Broad 2003). The lack of deterrent effect will cause more individuals to consider that money is the best consequence. Also, policy makers and judiciaries do not take wildlife crimes seriously. The level of punishment given to wildlife criminals is too weak to be a real consequence. As a result, criminals don't fear the consequences if they are to be caught.

The government also proposed to help local wildlife conservation projects. Conservation is a solution to preserving wildlife without harming them or relocating them. Deforestation is the main issue that raises the need for conservation. According to Michael Mares, director of the Sam Noble Oklahoma Museum of Natural History and Professor of Zoology, "80% of deforestation is carried out to meet fuel needs within a country" (Mares 1982). This data was collected over thirty years ago, but regarding the history of humans' carelessness and indifference towards the ecosystem, we can assume that this number has increased. Trees are cut down faster than they grow, and not enough trees are planted. About 150 acres are cut down every minute, and about 78 million acres a year(Deforestation n.d.). Animals who live in forests are forced to relocate and find new homes. Conservation will help prevent loss of habitat. Some
arguments against conservation may be lack of money or lack of supporter who do not know about the issue. However, the truth is that there are millions of supporters who are willing to help and educate the mass, but they need the attention of more powerful people to make a change.

National parks must be established to conserve forests; they will be successful in preserving animal habitat because they are protected by the government. There are national parks established today for the purpose of preserving flora and fauna. Yellowstone National Park is 2.2 million acres of preserved land and home to hundreds of animal species protected under the law. Park rangers work to ensure the safety of the animals and the preservation of the land. On park
grounds, it is illegal to interfere with the animals and plants. The U.S. alone has 186 national parks that cover about 43.1 million acres of land, while South America has 218 national parks covering 120.8 million acres of land (Mares 1982). Jadav "Molai” Payeng, living in India, single-handedly planted a 1360-acre forest to save his land. In over 30 years, he created the Molai Forest located in India. When he was a teenager, he witnessed wildlife dying in the heat; there weren't any trees to cover them from the sun(Messenger 2012). This motivated him to help the animals by creating his own forest. Animals found a new home in the forest and are now safe.

Although there are habitats preserved for animals, there are those who are stillexperiencing maltreatment in captivity. Animals are still being held captive for the purpose of human entertainment. Wild animals such as lions and elephants are whipped brutally at circuses when they can't perform a trick correctly. Wild lions are domesticated to be part of a show. In addition, polar bears are suffering from heat exhaustion while being held in blistering Arizona heat. These polar bears, whose fur is made to keep them warm in the frigid arctic weather, are given little body of water and are showcased to the public at zoos. The amount of care they are being given is evident on their dirty grey fur, which should be white. Humans are attempting to domesticate wild animals, although it is against their nature. Animals deserve proper treatment. If they are to be raised in captivity, they should be cared for based on their needs.

Animals should be relocated, if not already, to a proper habitat. Relocating animals could mean moving to a different facility or releasing them back into the wild. Keep in mind that releasing animals back into the wild is highly restricted for animals born and raised in the wild. Captive-born animals do not have the instincts to survive in the wilderness by themselves. Those captive-born animals receiving maltreatment in zoos should be relocated to another facility. Animals raised in circuses should be given freedom and placed in a good environment. They could be relocated into a national park or safari where the animals are being cared for. If farm animals are meant to die, they should be given a quick, painless death. They should just be killed in an instant. Even if they are nonhuman animals, they deserve the same respect that humans get. They are living, breathing creatures who can feel pain and emotions like humans. Maltreatment and torture should not be done towards animals.

If people could understand that animals are living creatures and not just items set up for showcase, there would be better treatment towards animals in the wild and in captivity. Humans need to work together to save and protect the fauna. Animals deserve to live as much as humans do. Governments must work together to ensure laws are strictly enforced. We must protect animals' homes and habitats via conservation. Most importantly, they must be placed in a proper habitat. As human population grows, animal population recedes. Humans need to refrain from slaughtering, torturing, or treating animals poorly. We all must work together to save the animals.

Saving and Protecting the Fauna through Conservation Projects from Overexploitation Which Leads to Extinction. (2021, Oct 31). Retrieved from http://envrexperts.com/free-essays/essay-about-saving-and-protecting-fauna-through-conservation-projects-overexploitation-which-leads-extinction 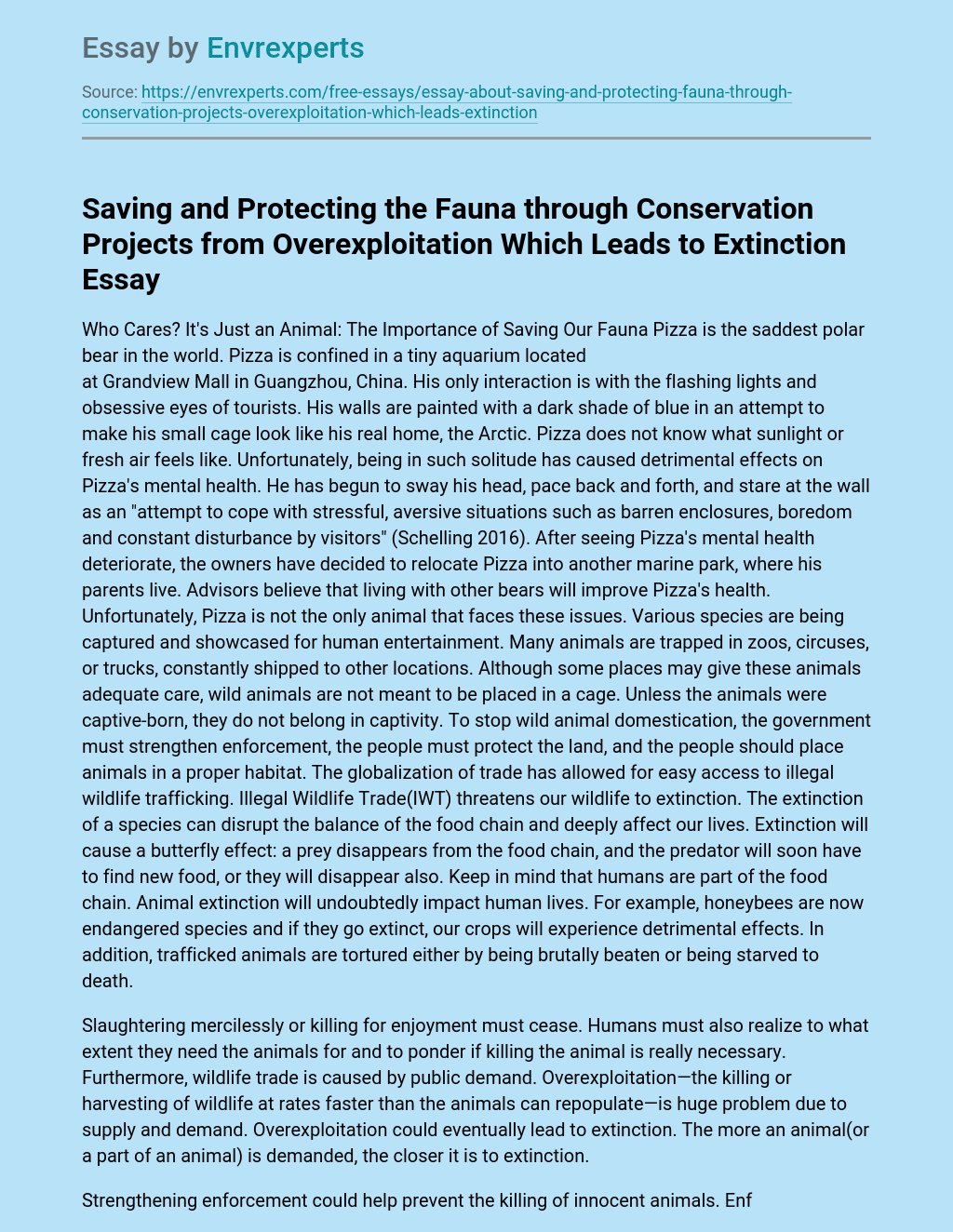