Since majority of the forested lands in southwestern Ethiopia are covered by coffee farms and most of them are managed by traditional management systems. The finding of this research showed clearly that traditional shade coffee management systems might have a contribution for maintaining the remaining mammals and ensuring the survival of many of the medium and large mammalian species of the region. This is because these farm systems can provide additional habitat and important food resources for most of the species in the area, and thus open the opportunity to implement conservation initiatives that benefit both, the local biota and local communities.

Don’t waste time
Get a verified writer to help you with Shade Coffee Habitat Certification
Hire writer
$35.80 for a 2-page paper

Our results build on the growing evidence of different farms of the world that, if correctly implemented, shade coffee agricultural system can provide additional opportunities for the conservation of mammalian species and other native wildlife (Cruz-Lara et al., 2004; Perfecto and Armbrecht, 2003; Estrada et al., 2012, Mertens et al., 2018). It is reported that coffee agriculture may serve as primary habitat for small generalist mammals, and an extension of habitat and dispersal corridors for large mammals (Bali et al.

Conservation actions and Certification There is a growing movement in the tropics to promote shade-grown coffee as a means for preserving biodiversity (Sherry, 2000; Rappole et al., 2003). This campaign needs to be actively promoted in areas such as the Southwest Ethiopia where all coffee farms are shade-grown. To do so there should be a need to increase awareness among farmers and developmental agents about the conservation values of these shade-grown coffees and sustain conservation of wildlife outside the protected areas. At the same time encouraging farmers by means of incentives to retain diverse shade of native trees and buffer areas within their coffee farms. In addition to strict enforcement of wildlife laws to combat hunting.

In this study, traditional shade coffee farming management with high canopy cover and better native vegetation complexity has helped for a high level of medium and large mammalian detection than the modern plantation coffee system. These properties of shade coffee agriculture have the potential to benefit not only the local ecology and biodiversity but also should benefit the economy of small-scale farmers. Since human livelihoods play an important role in maintaining ecological process and ecosystem services. Conservation effect by integrating coffee management with certification may provide better management practice, reduce the threat of biodiversity, and enhance the survival of species in the region. Certification offers an opportunity to link environmental and economic goals by providing a premium price for their coffee.

The traditional shade coffee management systems in the study area are meet more than the requirement for the certification criteria in terms of biodiversity conservation. The criteria used for Current certification schemes in Rainforest Alliance and Smithsonian Bird Friendly for coffee farms sustainability mainly emphasize on the vegetation complexity, including the maintenance of shade tree composition, structure, tree height, tree density, number of strata in the canopy and percentage of canopy cover outlined in the certifications that promote wildlife biodiversity (Philpott et al., 2007). It is acknowledged that the shade coffee system of the area is incomparable to most shade coffee systems of the world with respect to biodiversity conservation (Gove et al., 2008). However, there is almost no awareness of this in the world market. Certifying, publicizing and marketing the Ethiopian shade coffee as “organic”, “shade-grown” and “bird-friendly” has the potential to increase incomes of local coffee farmers and provide them a major financial incentive to maintain traditional shade coffee management farms instead of converting them into monoculture coffee plantations that are poor for biodiversity conservation (Gove et al, 2008). Furthermore, shade coffee is widely regarded to be of superior quality to sun coffee and is thus more valuable (Philpott & Dietsch, 2003) . These factors should be a significant consideration for local farmers in developing countries attempting to maximize profits. Certifying shade coffee agriculture contributes to reduce the threat of biodiversity and enhance the survival of species.

For instance, in 2007, in one of our study site, groups of 555 coffee-producing households in the area were certified by the NGO, and they obtained a price that was 15–20 % higher than the regular price in that year (Takahashi & Todo, 2013). At the time of data collection, we observed that in the localities of the study area, previously registered and certified sample coffee farms by Rainforest Alliance, threat on plants and wild animals are less likely compared to the localities not included in the certification program. In the area, activities of logging for timber from species of Cordia africana and occasional pouching of wild animals are frequently observed in uncertified coffee agricultural areas. According to Takahashi & Todo, (2013) the traditional shade coffee management certification program in the area has had a positive effect on forest conservation, which is consistent with the findings of previous studies on certification systems (Fleischer and Varangis, 2002, Perfecto et al., 2005, Philpott and Dietsch, 2003, Taylor, 2005).

Most certifications, on which these farm management protocols are based, have focused on bird and insect communities (Gordon et al., 2007, Perfecto et al., 2003, Philpott et al., 2008a). However, mammals in shade coffee are not a focus of these certification criteria. Mammals may also be sensitive to plant disturbances and therefore may be good indicators for changes in coffee farm management. Even though few studies are published that address mammal living in and around these coffee farms; mammals play an important role in tropical ecosystems.

In the area, almost all mammal species recorded in natural forest sites were also recorded in traditional shade coffee management sites. This is not altogether amazing, because coffee is native to the study region. It is acknowledged that the shade coffee system in the study area is biodiversity-friendly and developing a special type of certification for these kinds of area by considering mammals and providing certificates is important for better conservation of biodiversity. Wiersum et al. (2007) suggested an ”area-based” certification approach for Ethiopia which focuses on the sustainable management of overall landscapes, including retention and management of forest patches combined with sustainable and habitat-promoting farming practices, and operates at a scale most conducive to certification of many small-hold farmers. To make certification accessible to such farmers in Mexico, A´ valos-Sartorio et al. (2006) also suggested an area-based certification scheme. However, as the conservation of native forest remnants is dependent upon the positive attitudes of the surrounding land-users, endowing local forests with a readily harvested and profitable resource may be the best way to ensure the longevity of the forest (Stellmacher & Gatzweiler 2005; Brooks et al. 2006). Ensuring that coffee farmers receive a reasonable price for the commodity is perhaps most important. 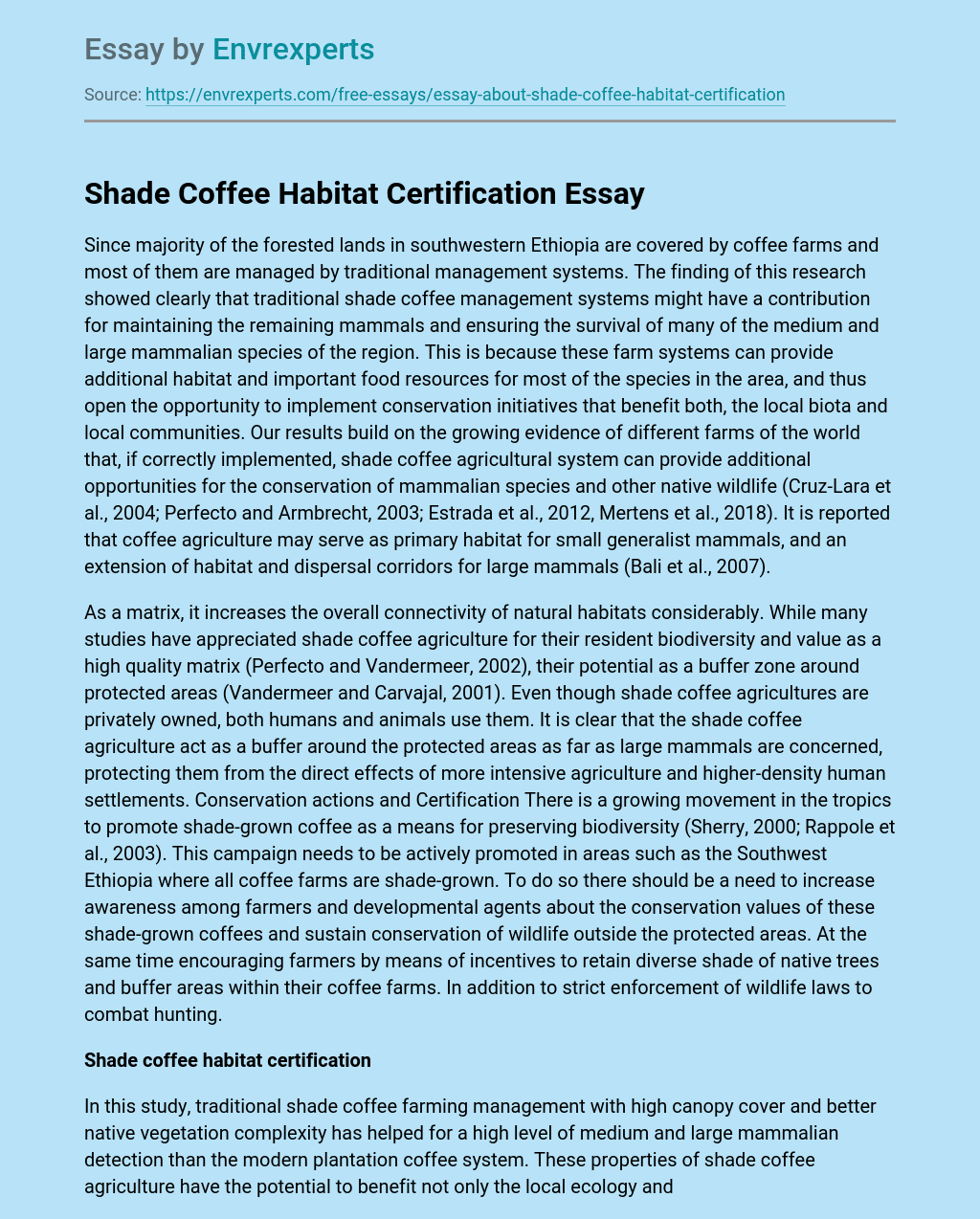