Should ExxonMobil Build the Oil Pipeline From Chad, Through Cameroon, to an Offshore Facility for Shopping Globally

There are many issues and variables surrounding the decision of whether or not ExxonMobil should built the oil pipeline from Chad, through Cameroon, to an offshore facility for shipping globally. Through the limited amount of information acquired from the article, and using the stakeholder theory, I believe that ExxonMobil should proceed with building the pipeline. One of the main reasons I believe this, is regardless if ExxonMobil build the pipeline or not, I believe it will eventually be built by someone else—probably someone or some company with less of an ethical and/or moral fiber.

Don’t waste time
Get a verified writer to help you with Should ExxonMobil Build the Oil Pipeline From Chad, Through Cameroon, to an Offshore Facility for Shopping Globally
Hire writer
$35.80 for a 2-page paper

All of my opinions from this paper are based on the belief that if ExxonMobil does continue to build the pipeline that they take every necessary precaution to ensure that the least amount of damage will be done if the project fails or if damages happen in the future.

The idea of moving forward on this project implies moving forward in the most ethical way possible. If ExxonMobil continues with the project, I am under the belief that no shortcuts will be taken, and that all steps and goals taken to complete this project have been thought out with economical, environmental, and ethical frameworks.

ExxonMobil Employees: If this pipeline yields a successful outcome, then ExxonMobil's employees will reap in great benefits, more so than the losses they will see if the pipeline is not successful.

I do not believe that an unsuccessful pipeline will harm the company so much so that employees will lose jobs and the company will see great losses only if the company makes sure its efforts are portrayed and seen as attempts to help the global community economically and environmentally. A failed attempt to make an environmentally and economically conscious pipeline does not have to be seen as a failure. With a successful pipeline, employees could see: increase in pay, increase in benefits, increases in company morale and culture, increase in benefits such as stock options, etc. This pipeline, successful or not, as long as it is portrayed to the employees and the world properly, could create a mass amount of value for ExxonMobil employees.

ExxonMobil Customers: For customers, we must examine the outcomes of proceeding and cancelling the new pipeline. If ExxonMobil proceeds with the new pipeline, then there will possibly be a decrease in oil prices. The new source of oil will allow for more supply, in turn potentially lowering the price of oil. If the pipeline is not built by ExxonMobil, however, a foreign company will most likely come in and build the pipeline, increasing the prices for US consumers by exporting it for a higher amount than if ExxonMobil itself had ownership over the pipeline. For this reason, I believe that ExxonMobil had a duty to protect its customers from increased oil prices and to try to increase customer value by supplying more oil which will potentially lower prices for customers.

The Citizens and Government of Chad: ExxonMobil could potentially help raise Chad out of turmoil and poverty, and create an increase amount of infrastructure to the country. Again, not building the pipeline would mean that another company from another county country, such as Libya, would try to move in to build the pipeline, which could be catastrophic for Chad. With the right amount of research and development, ExxonMobil has the best chance of creating a pipeline that will not hurt Chad's environment. ExxonMobil must be careful when dealing with a government like Chad, one that has much corruption, but if done so properly, the value added to the Chadian people could be enormous.

The Citizens and Government of Cameroon: Determining the value that Cameroon will receive or lose, as a whole, is trickier than that for Chad. There are many different stakeholders within Cameroon itself, including: the citizens, the Pygmies, the forest, the government, and the waters offshore. I included non-people stakeholders because they are a very major part of Cameroon. Once again, though, I state that the main reason for ExxonMobil to attempt this pipeline is if they do not then another, less ethical and environmentally conscious, company will step in to build the pipeline. ExxonMobil can assure the safest possibility of a clean, well functioning pipeline to the Cameroon people. The Pygmies are most concerned about the forests, and I believe that with more research and development, ExxonMobil can find a way to make sure their current estimate of catching leaks in the pipe can be incredibly lower. As long as ExxonMobil figures out a way to minimally affect the forests and will setup a leak protection plan, I believe there will much value added for all of Cameroon with very little value taken away from the Pygmies.

ExxonMobil Shareholders: Shareholders love to see expansion because increases in profits and stock prices almost always go along with it. In the case of this pipeline, success could mean pioneering new technologies for safe pipelines and deals with developing countries to see value added for both the countries and the company. For shareholders, value comes mostly in the form of their stock's prices. Though there is always a chance for failure, especially in a project as large as this one, the value added from success of this project much outweighs the value lost from failure. As long as proper measures are taken, I believe that an unsuccessful project will not harm the shareholders' value as much as a successful project will increase the shareholders' value.

Should ExxonMobil Build the Oil Pipeline From Chad, Through Cameroon, to an Offshore Facility for Shopping Globally. (2021, Oct 31). Retrieved from http://envrexperts.com/free-essays/essay-about-should-exxonmobil-build-oil-pipeline-chad-through-cameroon-offshore-facility-shopping-globally 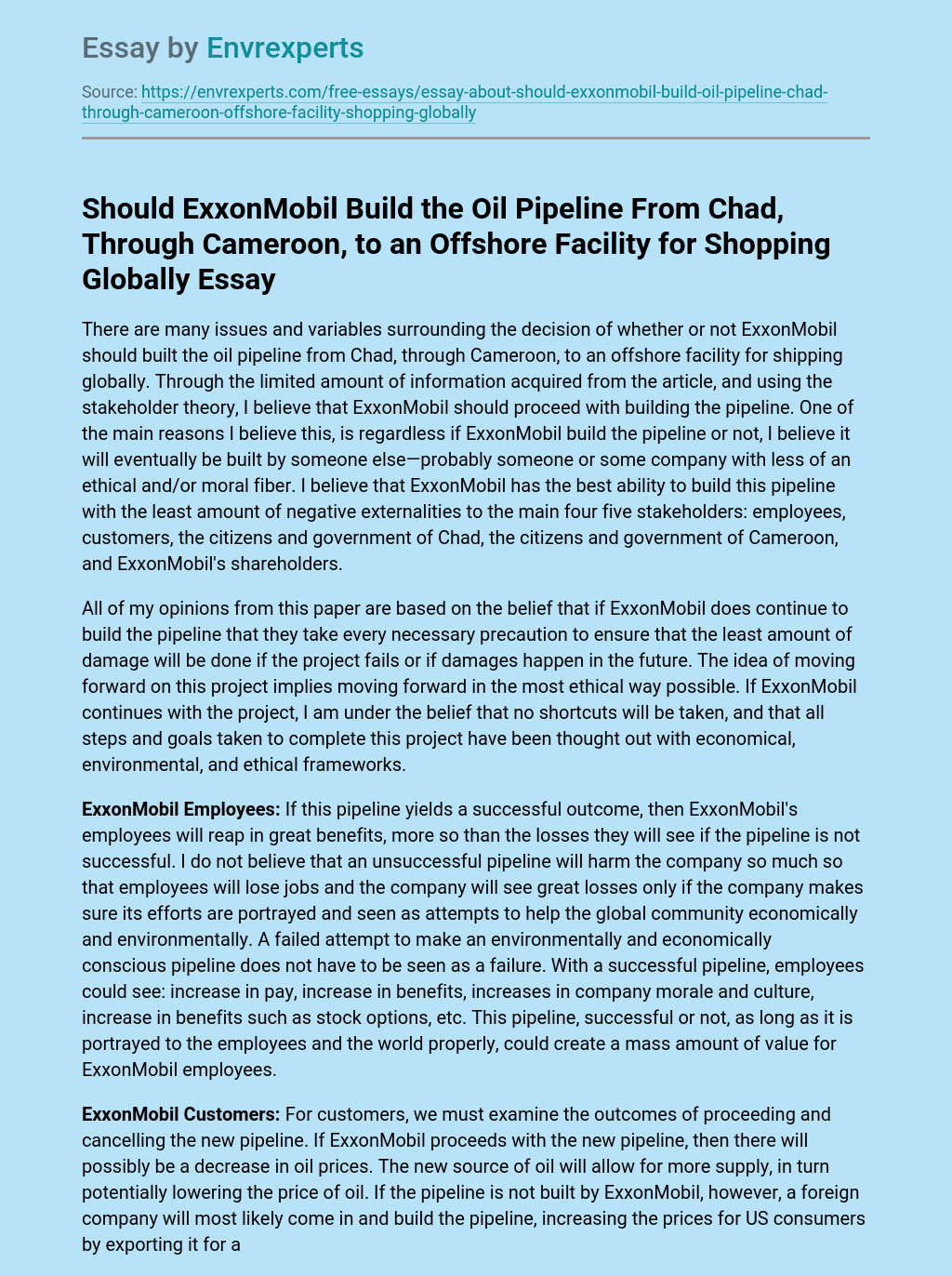