Should Recycling be Mandatory In the U.S

With more and more countries, states, and cities catching onto the recycling trend the question of whether or not recycling should be mandatory in the U.S. is being brought up often.

This topic is being pushed frequently since some link waste and pollution to global warming. Some believe recycling should be mandatory due to the positive effects it can have on the environment like, reduce waste, and preserve energy. However, some do not because of the possible costliness, its can be unsafe or unhygienic, and the sorting process is difficult.

Don’t waste time
Get a verified writer to help you with Should Recycling be Mandatory In the U.S
Hire writer
$35.80 for a 2-page paper

On the one hand, recycling should be mandatory because it would reduce waste, benefit the environment, and preserve energy. Only a few states in the United States have adopted a mandatory recycling law. When it became a popular topic in the 70’s, it had a positive impact. It was around the time regulations had been put in place. “More than 100 landfills that were handling as much as 90 percent of New Jersey’s waste a few years ago have been closed,.

.” (Sullivan, Joseph). Since the law had shut down many landfills in New Jersey, a similar law should do the same for the other states. This law would reduce waste because not as much trash would end up in dumps and landfills. The trash would go to a recycling plants, here it would be processed instead of being sold and shipped to other countries. Usually the materials are then dumped in the ocean or forgotten in landfills.

A country that has recently picked up on mandatory recycling is China. Instead of importing trash from other countries like the U.S and Germany, they have decided to ban imports of many types of waste and started to focus on their own country’s waste and enforce the regulations. “China recently banned imports of 56 types of solid waste, including paper and household plastics, which means that recycling plants are now looking to domestic sources” (Chenyu). China is one of the countries that dumps the most trash, but now they have also started to make cuts hopefully completely condemning it eventually. By enacting mandatory recycling the number of landfills would be reduced, along with the amount of waste in each. Not only would the law reduce landfills but also reduce the waste U.S. exports to other countries, not minding the end result.

Mandatory recycling would help save the environment. It would reduce the amount of trash that ends up in the ocean and an land. This waste harms animals, plants, ocean quality, and materials. Many animals are found dead or harmed from either ingesting trash, becoming entangled in it, or chemicals ruining their environment. “While many trees are felled everyday, recycled paper manufactured from specific trees is continually utilized to reduce deforestation” (Rinkesh). Mandatory recycling would greatly decrease the amount of deforestation because of the increase amount of paper that could be reused. This would also conserve energy. “Taking steps to conserve natural resources like minerals, water and wood, ensures sustainable and optimal use” (Rinkesh). By using recycled materials raw materials can be conserved and only used when needed. Implementing mandatory recycling would create an abundance of materials. Land and oceans are not only habitats to humans but also plants and animals, they are not capable of protecting and preserving their own environment from waste, deforestation, and pollution.

Required recycling would preserve energy. Recycling uses less energy, money, and time than extracting the materials. “A lot of energy is used to process raw materials in the course of manufacture. Recycling plays a big role in reducing energy consumption, which is vital for large-scale production, for instance, mining and refining.” (Rinkish). Mining depletes the amount of natural resources, and the machinery required uses an abundance of energy. By enforcing mandatory recycling in an entire country a massive amount of energy can be conserved since there would be an abundance of waste to recycle.

On the other hand some believe that, mandatory recycling should should not be enforced because it is expensive, separating materials is difficult, and it can be unsafe and unhygienic. The cost of recycling is higher than people think. It will cost billions for the sites to be built, the machinery, and trash that overflows and can not be processed soon enough is sometimes shipped away or put into a landfill. Since there will be less landfills, dumping prices will go up, this is what's happening in Australia. “The report says that in most states it was not economically viable to send recyclable materials to landfills due to waste levies, which were as high as $141 a tonne in metropolitan NSW.” (Topsfield). Since Australia had to sell materials to other countries to stop the overflow of trash, the expense of dumping was high. Then China banned importing recyclable materials, causing Australia to be stuck with landfill expenses. Citizens might have to pay to help the cost. “The research found two-thirds of Australians were willing to pay $1 to $2 extra a week in council rates to help cover the cost of curbside recycling” (Topsfield). Although most Australians seemed agree with possibly paying extra, some Americans may not feel the same. With being so unsure of the expense, people are hesitant.

Recycling should not be mandatory because the sorting process is difficult. “Most people are trying their best to recycle plastic- but the many different ways in which recycling is collected by councils across the UK has left them confused over what can be recycled and what can’t” (Stephenson). Not only is it troublesome for the recycling plants to sort plastics but, it is also troublesome for the community. This causes it to be even more difficult for the sites because it is not possible for people to sort plastics correctly without being supervised, which is impossible. A lot of recycling bins do not require sorting and leave it to the recycling plant, causing it to be very time consuming. “In recent years, however, recycling companies are struggling with higher processing cost, due in part to newer, larger recycling bins that don’t require user sorting…” (EarthTalk). The more of a struggle sorting is the higher processing cost become. Some fear that if the sorting process is not done correctly the expense would be treacherous.

Another other reason some believe recycling should not be mandatory in the United States is because of sanitary issues. Recycling produces harmful waste, whether it is gases from the incinerator or “toxic sludge”. “Most recycling processes generate large amounts of hazardous waste. In the final analysis, what’s more worrisome – old newspapers buried in the ground, or the toxic sludge generated in the process of de-inking them for recycling?”(Taylor). These forms of pollution usually end up in the environment also. When people put their waste into its bin, most people do not clean them. This results in chemicals, rotting foods, and liquids piled together waiting to be processed for weeks or months accumulating bacteria. Sometimes other things get through too. “If there are impurities or toxins in the original material-say lead paint from an aluminum spray can- they’ll usually make it through the recycling process and end up buried in the new product, say, a soda can” (Handley). This could kill, or harm many people. An even worse example being, “-hundreds of buildings in Taiwan made from recycled steel had been giving people gamma radiation poisoning- and not the good kind- for the past twelve years.” (Handley). The mistake made in Taiwan is what many people are concerned about. A mistake from a recycling plant could cause death or severe damage to people. For some, that is too much to risk.

After considering both sides, I believe recycling should be mandatory in the U.S. because because it may decrease the amount of harmful waste in our environment, however, we need a more effective plan, to prevent landfill pile up from overflowed recyclable materials. An increase in cost to recycle would make the country uneasy. There needs to be more effective sorting methods and tests to make sure materials are safe. Strict policies with rigorous penalties if the standards are not met would be needed. These needs will need to be met for mandatory recycling to be efficient and working. The topic of mandatory recycling is globally significant because the United States is not the only country that should consider cleaner choices.

Should Recycling be Mandatory In the U.S. (2021, Oct 31). Retrieved from http://envrexperts.com/free-essays/essay-about-should-recycling-be-mandatory-us 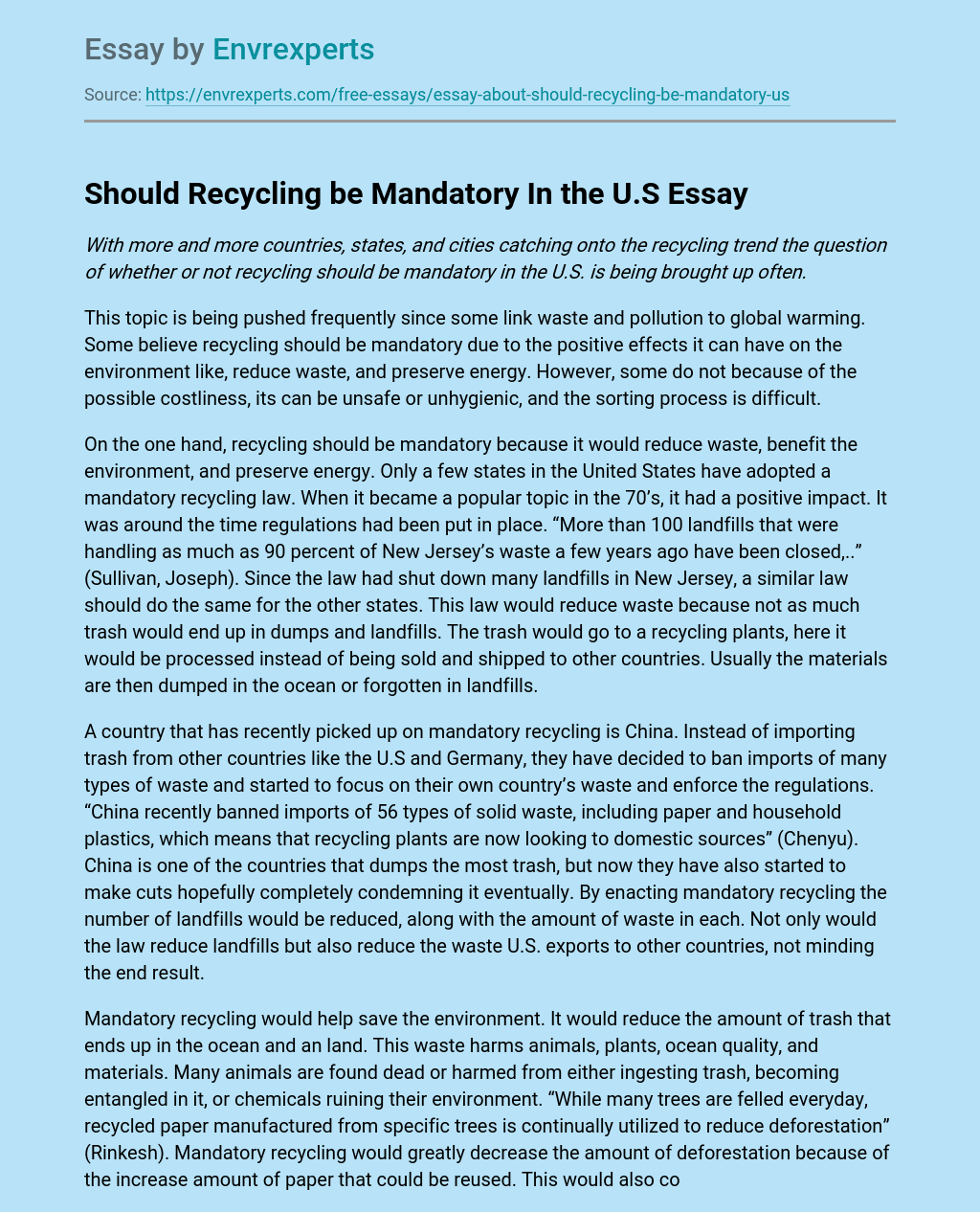