Having inhabited a geographical region or country for long enough to know the environment itself and survival tactics even before the arrival of different cultures or ethnic groups, Aboriginal communities or people have an upper hand in the conservation of the environment. This is because they have unique traditions, cultures and economical characteristics that enabled them to actually live in a green environment way before new arrivals, overpopulation and consequently, pollution.

As such, indigenous people and their land holdings are a vital strategic component in regional and national conservation strategies.

Don’t waste time
Get a verified writer to help you with Significance of indigenous people on environment protection
Hire writer
$35.80 for a 2-page paper

It is easy to think of rainforests in terms of flora and fauna, but more often than not, we lose sight of the indigenous peoples living in these regions. It is after all, their home. Many areas of highest biological diversity on the planet are inhabited by indigenous people. The Biological 17 are actually the 17 nations that are home to more than two thirds of the earth’s biological resources, and include Australia, Brazil, China, Colombia, Congo, Ecuador, India, just to mention but a few.

These are areas of high biological diversity- plant and animal species unique to them.

Indigenous knowledge is the basis for local level decision making because many Aboriginal people created a complex system of management of land, forests, wild animals and natural resources generally that contributed to their immediate environment and survival. They depend directly on natural ecosystems for their livelihoods- wild plants and animals for food, clothing, fuel- which forces Aboriginals to actually conserve their environment.

The economy, identity, cultural and spiritual values and social organizations are closely linked to biological diversityand natural ecosystems. As such, indigenous peoples and their land holdings are a vital strategic component in regional and national conservation strategies.

Aboriginals have traditional agricultural practices that are resilient to climate change- Aboriginals lacked the required technology forcing them to come up with eco-friendly agricultural techniques that are adapted to extreme environments like the high altitudes of Andes, dry grasslands of Kenya or the extreme cold of Northern Canada1. These are techniques that are, modified by policy makers to enhance agricultural output and at the same time reduce pollution of the environment. For example, Rainforest Partnership empowers these communities with alternative economic opportunities, so that they can turn away these outside interests, and the long term payoff is a sustainably managed area inhabited by the natives and people who call it home.

Agroforestry- Indigenous people appreciated the fact that they depend on plants for food and that same time need trees to enhance rainfall patterns, climatic conditions that are required for the development of their survival. Agroforestry essentially optimizes land space to grow multiple crops or raise animals in a manner that is more beneficial to the forests. According to US Forest service, many indigenous communities, despite technological advancement and education are still practicing on their traditional ecological knowledge today. Their ways of life and their livelihoods can teach a lot on preserving natural resources, growing food in sustainable ways and living in harmony with nature.
They conserve and restore forests and natural resources- Indigenous people feel connected with nature and as part of the ecosystem. Natural resources are considered ways indigenous people are helping the world.

shared property and all efforts re put towards them to mitigate the effects of climate change. A third of global forests, crucial for curbing gas emissions are primarily managed by indigenous people, families, smallholders and local communities.
Sophisticated farming and growth of indigenous foods- the world today majorly depend son staple foods that are easy to grow and do well with the current climatic conditions, wheat, rice, corn, potatoes, just to mention a few. With nutritious foods and native crops like quinoa, oca, moringa, native millet, there is honestly no need for fortification of maize flour or milk for that matter. People rear dingoes and possums and move caterpillars to new breeding sites, can almost make you imagine how life is, walking around the with fish stock.

Indigenous territories hold 80 percent of the world’s biodiversity- conservation of biodiversity essential for food security and nutrition. The genetic pool for plants and animals’ species is found in forests, rivers and lakes. Living naturally sustainable lives, Aboriginals preserve this spaces helping to uphold the biodiversity of the plants and animals in nature.

These Aboriginal communities embody sustainable practices, some that are mentioned above, that we must all strive to meet
According to World Resources institute, more than 50 percent of world’s land is community land, collectively held by indigenous people and other local communities and managed primarily under customary tenure arrangements.

Indigenous tenured lands often have significantly lower rates of deforestation making the investment in these communities one of the most cost effective solutions to preserve rainforests, protect endangered species, mitigate climate change. However, most of these land is not formally recognized by national governments leading to threats of new roads development or industrial activities where the same Aboriginals are fighting so hard to protect, not only for themselves but for the rest of the world too. They play the role of custodians of the land and have a right to stand up for their land when need arises as they hold legal entities and rights.

They have a right to challenge the policy making bodies in development and management of land, because it directly affects them.
According to Buckley John, ‘Young Australians Sound off on the bushfire crisis.’ I, 13 Jan, 202, a young student in matters of science and indigenous resistance delineates aboriginal practices of sustainability. Indigenous people have been trying to put up resistance against invasion by governments and investors, especially in Canada and USA, the mining operations are opposed and that is exactly what is needed. This is the similar story in Ecuador where the government continues to view people as an obstacle to economic growth. It is pushing for oil development in the region auctioning off blocks of the Sapara’s Naku- the Aboriginals- that it considers under populated and underutilized wilderness that must be tamed. It is actually time to flip this narrative and acknowledge the role that the Sapara and other Aboriginals in the world are playing towards environmental conservation, with which without, the world’s biological diversity are imperiled.

Noam Chomsky, Indigenous People Are The Ones Taking The Lead in Trying to Protect All of Us, Real People’s Media, 22 Dec, 2016. Chomsky stresses the fact that it is important to resist the devastating decisions about mining and other extractions and praises Canada’s first nation people who are deeply worried about the environment and strive to protect it. International bodies such as UN and world bank have played a major role in bridging policy implementation gap between Aboriginal communities and foreign communities or governments.

In Namibia, the recognition of community-based natural resource management under the Nature Conservation Act of 1996 has resulted in the establishment of 82 conservancies and 32 community forests. Currently, conservancies cover about 20 percent of the country’s surface area, while some animal populations have been restored, others are recovering while living conditions have improved. The Fourteenth Conference of the Parties(COP14) of the Convention on Biodiversity, held between 17-29 November, in Egypt, gave leaders a chance to further assert the role of indigenous people whose stewardship may be a critical way to meet the Aichi Biodiversity Targets- 17 percent of terrestrial and 10 percent of coastal and marine areas conservation by 2020.

In Europe, this shift has led to the recognition of the Havukkavaara forest in North Karelia in Finland and is described as ‘a new style of community-based conservation that includes culture, history and help Aboriginals to sustain traditional lifeways and conserve the last vestiges of the old-growth forests south of the Arctic Circle in Finland2.

In Canada, the recent federal recognition of the Edehzhie Protected Area in the country’s northwest marked an important development in the recognition of efforts made by Aboriginals in national biodiversity conservation.

During the Earth’s Summit in 1996, indigenous peoples and NGOs gathered in Kari-Oca, Brazil, to share their concerns about the environment where the value and role played by the Aboriginals was recognized and influenced the outcome of the Summit.
This is a clear indication the Aboriginals are seizing whatever opportunities presented to them to present their challenges and resist approaches and strategies that contribute to biodiversity conservation and environment at large.

Governments were required to introduce domestic legislations, or amend their constitution to ensure participation of Aboriginals in the conservation and sustainable use of their environment. The right of indigenous people to participate in the use, management and conservation of natural resources is also recognized in the International Labor Organization(ILO) Convention No. 169 that provides the right of indigenous people to own traditional lands and manage their environment and its resources. 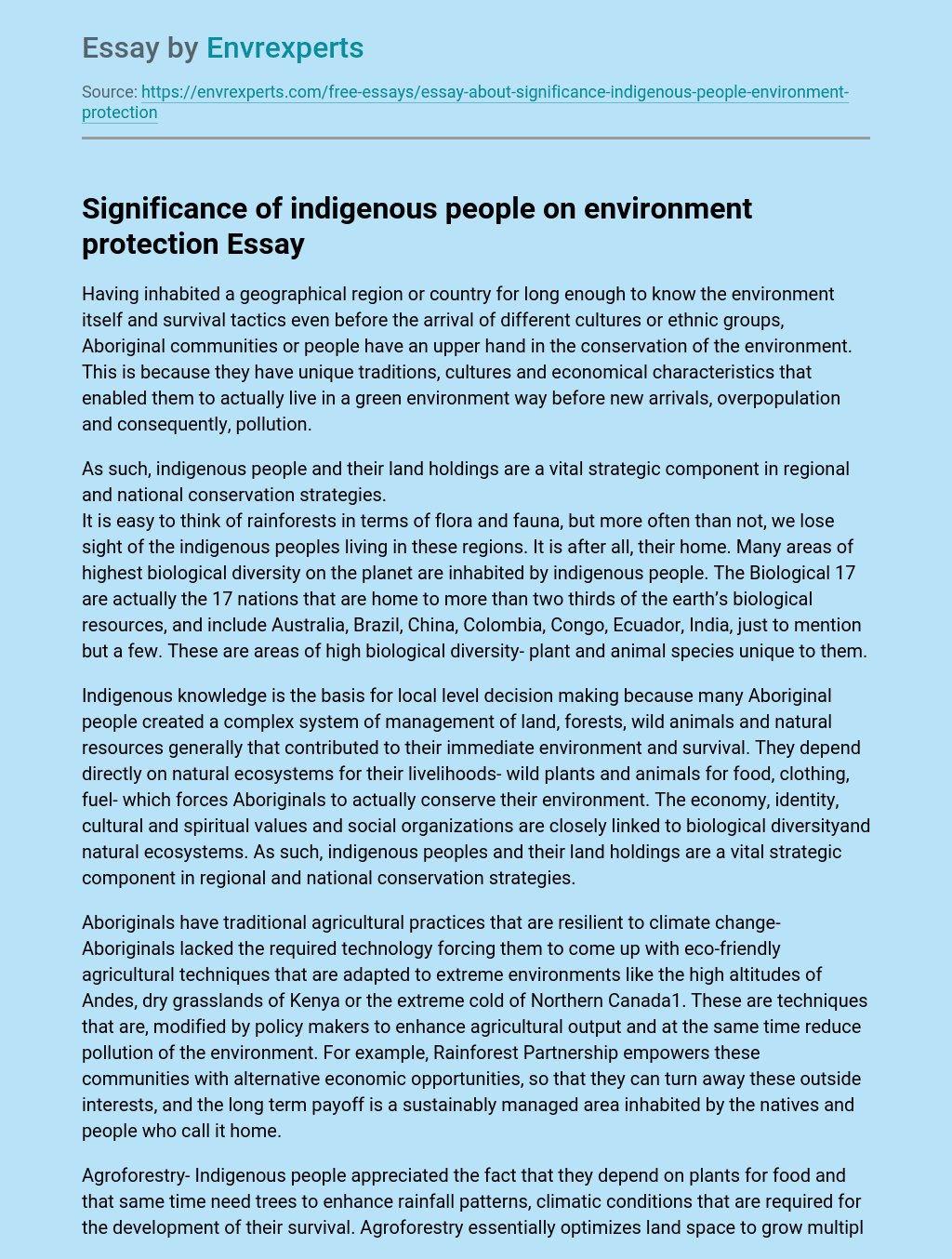