Economic growth represents the continuous progression of a nation in terms of trade activities and emancipation natural resources with regard to population fundamentals. The significant involvement of natural and human resources as a basic input brings in the component of sustainability. Hence, in the pursuance of national developmental objectives, this involves the significant utilization of the territorial distribution of resources. Through experience it has been revealed that this practice effectively leads to exploitation of these natural resources beyond the sustainable standards.

Don’t waste time
Get a verified writer to help you with Significant Involvement of Natural and Human Resources as a Basic Input in the Component of Sustainability
Hire writer
$35.80 for a 2-page paper

Market liberalists, bioenvironmentalists, institutionalists, and social greens continue to hold fundamentally different and similar views in a bid to portray the association between economic growth and environmental sustainability.

Continuing economic growth has a great potential of merging with the fundamentals stipulated by goals of achieving a sustainable future. Ever since the creation of the sustainability debate many nations have made significant to properly utilize their resources. Social greens and bioenvironmentalists observe that some of these countries have indeed managed to skirt their natural limits of available resources by acquiring resources (Clapp and Dauvergne 2005, p.

113). More focus is also increasingly been given towards the problem of growing populations. Clapp and Dauvergne (2005, p.109) observe that "institutionalists and some bioenvironmentalists add that population pressures often exacerbate this problem, or at least make this once-sustainable practice." Also bioenvironmentalists have for a long time stressed on the factor of lowering the total global population, which will require the rich countries to lower their consumption (Clapp and Dauvergne 2005, p. 114). Moreover in the recent times there has been an increasing focus towards stabilization of market dynamics.

As a result, majority of the market liberals and institutionalists continuing advocating for market-oriented measures (Clapp and Dauvergne 2005, p.94). The creation of government and energy subsidies as a form of preventing overexploitation of resources has also been implemented. However regarding the matter surrounding the implementation of subsidies, market liberals are against these reforms (Clapp and Dauvergne 2005, p.99).

On account of increasing numbers of populations, there is an increasing concern regarding the changing patterns of consumptions in different nations. Clapp and Dauvergne (2005, p.110) argue that “Bioenvironmentalists and social green both argue that growing consumption itself tightly linked to economic growth, is devastating the planet." This has led to the development of the debate regarding the progressive development of distortions in the existing market framework. These market distortions in addition to the existence of weak institutions and inefficiencies have led to market liberals agreeing that there are potential problems with regard to market distortions on the existing natural resources (Clapp and Dauvergne 2005, p.98).

Climate change forms a significant factor, especially with regard to the sustenance of future populations against a constantly depreciating environmental resource potential. This has led to the implementation of significant legislations aimed at controlling climate change through implementation of international conventions to which most countries are signatories. It is argued that the occurrence of inevitable pollution as the world progressed towards the cleaner world of wealth and prosperity does not necessarily guarantee lift the poor out poverty but rather creates a complex situation (Clapp and Dauvergne 2005, p.116). Measures taken against these effects, for example, through curbing of carbon emissions, have led to a significant progress. Efforts have been seen from super power nations and third world nations. Clapp and Dauvergne (2005, p.100) observe that "Finally, green aid can help to transfer cleaner technologies to developing countries." However, there are major controversies emerging regarding the suitability of such solutions especially with regard to different contextual situations. In addition, the concept of introducing subsidies has taken a more positive turn towards the curbing carbon emissions and consequently reducing the events associated with climate change. Through collaborative efforts majority of bioenvironmentalists, social greens and institutionalists share a common agreement with regard to the concept of introduction of subsidies by governments (Clapp and Dauvergne 2005, p.99). However, there are still those who argue that there may be significant advantages in some of these measures. For instance, Clapp and Dauvergne (2005, p.102) observe that "thermodynamics to show that the notion of perpetual growth, promoted by market liberals, is erroneous because unlimited growth is physically impossible." But with continuing industrial progress with a move towards the implementation of efficient systems with regard to energy utilization one can argue that climate change fundamentals are within reach.

In as much as the arguments fronted by the market liberalists, institutionalists, bioenvironmentalists, and social greens show differing points of agreement, these serves to show that there is a significant association between economic growth and environmental sustainability. Some of the factors observed include the continuous effect of population growth upon natural resources; the resultant effect of market distortions as an economic perspective; the interplay of climate change objectives and carbon emission with regard to the implementation of subsidies; and wealth creation fundamentals. Therefore, it is important to note that economic growth involves several issues, which in effect impact upon the fundamentals of sustainability.

Significant Involvement of Natural and Human Resources as a Basic Input in the Component of Sustainability. (2021, Oct 31). Retrieved from http://envrexperts.com/free-essays/essay-about-significant-involvement-natural-and-human-resources-basic-input-component-sustainability 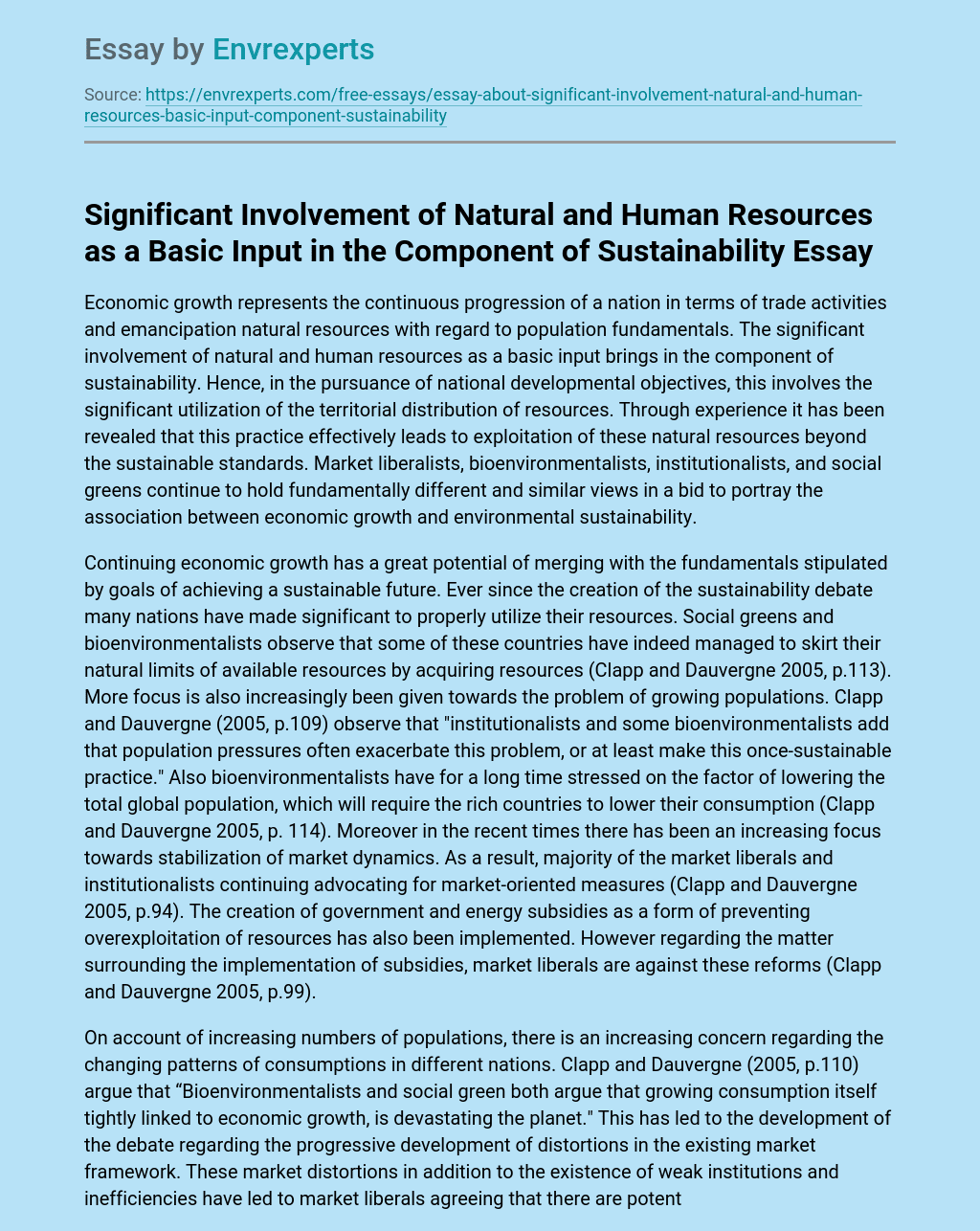