Don’t waste time
Get a verified writer to help you with Guha and Environmental Protection
Hire writer
$35.80 for a 2-page paper

He also pointed out that due to the lack of awareness to reality, contemporary ecological ethics in society has fallen into a kind of development dilemma and is unable to deal with some practical problems in the practice of environmental protection. The unequal use of rights and obligations in the environment has led to human conflicts, so a “movement for environmental justice” has been launched. For example, by using communities of color and low-income communities as landfills for toxic waste, the U.

S. government is essentially building on the sacrifice of people of color in the name of protecting the environment. Later, people started a movement of protest to get equal rights. In general, environmental justice refers to the right of all people, regardless of nationality, race, gender, wealth, etc., to enjoy the freedom of an orderly, clean and sustainable environment and to be free from environmental damage.

Its primary purpose is to protect people’s equal environmental rights effectively and minimize the unequal ecological impact caused by the unequal relationship between people, to maintain the value and dignity of people.

According to Martinez Alier’s point of view and purpose: environmental justice and economic recession are essential to consider together. To protect the environment, we need to save energy, which means that society can not continue to use as many resources as it wants. Human beings must develop in a planned way, which will affect the economy but protect the environment. We know that before the industrial revolution, the social economy was pure. Without the technology to generate electricity, some garment factories do produce a lot of pollution during the dyeing process. However, due to its small scale, the environmental pollution caused is also limited. The effect of the industrial revolution was mass production. With mass production, economic activity and its external costs are also increasing. Carbon dioxide and methane in the air, for example, have risen sharply since the industrial revolution. And the rapid economic development due to the arrival of the industrial revolution, the progress of the times, and the stable environment provide a stable living environment for human beings. When the population starts to grow in Numbers, their demand for energy and materials increases, and the atmosphere is affected. Given the rise in GDP and rampant human growth, it could lead to a recession. Because social demand is higher than the stock of environmental energy, the lack of resources and products will decrease, so the economy will eventually decline. Economic downturns inevitably increase ecological stress, but economic growth can also lead to conflicts with environmental justice. “GDP growth goes together with increasing pressure on biodiversity, climate change, And the undermining of human livelihoods at the commodity frontiers. Excessive consumption by rich and middle – class people is not only a menace for other species and future broke humans.”（Martinez Alier 62)

Economic growth is not merely the improvement of human living standards or the strength of a country. But often accompanied by the disappearance of many biological species in the environment, economy and environment coexist. Economic development also means the sacrifice of the situation, some precious class money is accumulated may sacrifice the living environment of several generations. Although the movement for environmental justice may conflict with society’s waste of resources and uncontrolled development, it means that people’s awareness of environmental protection is gradually increasing. 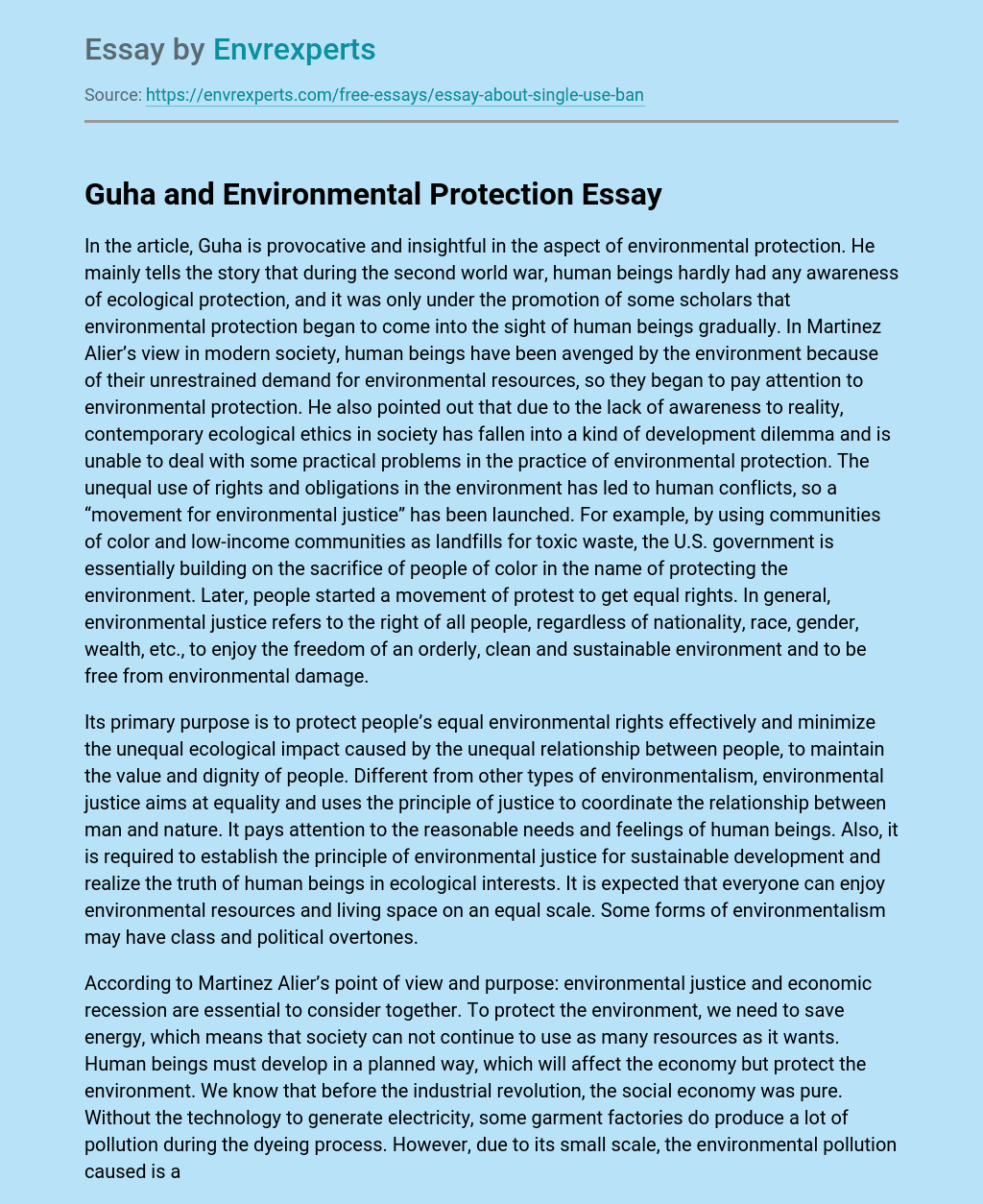