The broad concern of energy is most likely the greatest issue that mankind has faced thus far. As population grows exponentially particularly in developing countries, we not surprisingly see a demand stronger than ever before. The plead by impoverished regions is for basic human needs, a call for simple aspects we as Americans take for granted on a daily basis, things like heat, light, along with the overall abundance of energy. Prior to the industrial revolution taking place in the 18th and 19th centuries, our ancestors for millions upon millions of years looked to the sun for these life requirements.

Don’t waste time
Get a verified writer to help you with Solar Potential and Progress in Developing Nations
Hire writer
$35.80 for a 2-page paper

Now, through a relatively recent push for the expansion of energy production due to economic as well as environmental pressure, we see the resurfacing of an age old idea fused with today's abilities of technology and production. Energy can now be harnessed directly from the source of all life and converted to electrical energy.

As we see the world energy requirements increase accompanied by dwindling fossil fuel reserves, any reasonable soul would realize that a large change must be on the horizon, a change that will directly affect all of our lives, in many aspects that were unimaginable just a few years ago.

As this new market comes to the forefront of all economy, we see even more potential for investment in developing countries. These projects push for the creation of jobs, create a product, empower women, raise potential education levels, and most importantly allow these countries to build an economy that can continue to prosper as long as the sun rises.

In order to understand the end the concept of solar energy, we must start, where all life begins, the sun. Technology examined in this paper is focused around photovoltaic cells, most commonly made of silicon crystals with trace amounts of other elements. These crystals are set up in 4 X 4 silicon atom structures. These cells have the ability to collect the suns energy and directly convert it into electric current. This process all starts with earth bound photons of light. Upon contact with a PV (photovoltaic) cell, the photon interacts with electrons, giving them the opportunity to escape the pull of their central atom. This escape is possible due to the certain layers and elements used in these conductors. The n-type semiconductor is the first layer that sits under glass and an anti reflective coating. Small amounts of a single element most commonly arsenic, are added to this first layer of a silicon crystal because of arsenics ability to hold five outer level electrons while the surrounding silicon only holds four. The process of doping crystals with arsenic creates a situation, in which the extra electron is much more free to escape.

This process is complete with the use of a p-type semiconductor sitting behind the n type, completing the current. This layer is doped most commonly with an element named gallium. It is used due to its natural state of 3 outer electrons. When placed in a silicon crystal, the gallium creates an electron hole, which allows the electric current to be completed. The entire production and process of creating these panels is a costly one, especially when you look at it purely at its initial cost. Other challenges include the large scale production of silicon that is in some cases needs to be more than 99 percent pure in order to work efficiently. Even further problems deal with the aspect efficiency. When we speak of efficiency, we are talking about what percent of light coming into contact with the PV cell, is being turned into useable energy. Due to the large recently large push for renewable energies, specific funding for technological advances have drastically increased efficiency ratings while also solving the high production cost problem. In the early 2000's the switch in the production stage from pure silicon to polycrystalline silicon, allowed the cost of materials to be lowered greatly?. Other advancements such as multilayer PV cells have pushed efficiency to levels never thought possible. As this new exciting sector of large scale feasible solar power forces its way to the center of renewable energy solution, we are just beginning to see the endless energy potential.

Small scale projects in many developing countries have created drastic positive change for countless lives. We see these most commonly in areas where sun light is optimal all year round. Construction has taken place in many African and Indian Regions. One case study is from Western Africa where rural areas around Senegal and Burkina Faso are in some cases choosing even solar power over connecting to the local power grid. Due to frequent outages while connected to the power grid, many communities are reaping the benefits of solar technology. The simple, yet so essential aspect of light, gives so many the opportunity to work or study on after the sun has retired. Community productivity is no longer confined by fleeting daylight. I believe this feature of solar power more than any other, instills so much hope for progress towards a higher quality of life. In off grind locations PV cells connect communities to the outside world through radio, television and internet, allowing for further educational possibilities.

As climate change becomes more pronounced, predictions portray a landscape much more severe than the one we see today. We in Western Washington will experience more saturation, while the equator will experience less rainfall than ever before. Deserts have already begun to spread, leaving less and less habitable lands for an ever growing population. We have begun moving towards a solution but change is slow, and resistance is widespread. Fortunately, governments around the world have set in motion incentives to brighten the future. Even now, with panels at record low costs, government subsidies do much to spur solar energy integration. Large populations of Africans still rely on the natural world for their everyday energy. "Wood, or other biomass such as crop waste, is the dominant fuel for cooking. This comes at a huge cost to the environment as families continue to cut down trees for much-needed fuel4.” A single solar panel can simply halt an entire family's need for wood and other natural fuels whether it be cooking or heat for an entire decade, while conserving and giving the natural world a fighting chance.

Mamadou Saliou Sow, is an African native and director of Solar Power Electric Company, which is one of the leading solar manufacturers supplying these rural areas. "One square meter of photovoltaic cells were previously around 1,350 dollars, but with a subsidy from the government of more than 8.3 million dollars, we have reduced this. Now, one can get panels and the hardware needed to install them for 520 dollars. Solar panels also have a long life span after installation; they can last eight or ten years or more?.”

Subsidies are being used here to spark growth and production with in these areas. When looking at the larger economic picture, governments have numerous reasons for aiding these developments. The gift of light fused with hard work and ingenuity, has given rise to many small local businesses in the region. As Bangladesh joins the race for a clean solar powered future, women have been chosen to lead the way. By 2009 more than two thousand women were chosen to undergo a 15 day course in which they were given the knowledge and tools to install and maintain small scale solar systems within their communities”. India is one country which still has strong issues surrounding the aspect of women and inequality. Giving females a chance to earn income, and therefore support themselves creates a sort of new found confidence. A self made woman is now possible for the first time in India, something that is still quite rare in most emerging nations. The social implications of solar create a far safer overall environment for women.

For the most part, children and women are the ones trapped inside, cooking, with toxic fumes from fuels like coal and kerosene. A worldwide move towards solar would have momentous effects especially single women caring for children. “Solar power has given rise to an economic boom in our commune," says Souleymane Coulibaly, the Mayor of Sirakorola. "The use of solar power has greatly improved the quality of life for the population, especially women.” Entrepreneurs, African men and women alike, have taken this opportunity to improve their position in life as well as their communities around them with a new found hope for the future. A hope that's much easier to find in the light.

One of the largest challenges to large scale solar energy projects is the startup costs required. However, even in these economic times, countries are finding funding for these much needed programs. The World Bank is the primary lender in most these situations and has funded many large scale renewable energy projects all over the world. In Ouarzazate, a small kingdom located in Morocco, construction has begun on one of the largest solar plants on the planet with an estimated total cost of around 9 billion dollars. The technology being used here is called solar thermal, which is much different then photovoltaic cells explained above. Here, builders are using the power of thousands of mirrors in order to reflect the suns light and focus it onto certain points. These points collect the magnified heat is used for the creation of steam by the boiling of liquids. The steam in turn, spins turbines, creating electrical energy. Morocco's government hopes to have 2000 megawatts of energy by 2020 using four separate plants. This project finds helpful solutions for so many problems surrounding Morocco and Africa as a whole. Job creation, energy independence as well as environmental sustainability are all positive aspects accomplished. Electricity generated by these four plants will reach almost a million people's home and businesses. Similar projects in Egypt as well as South America have begun.

It seems finally that the world as a whole is waking up to the international dilemmas glomming over us all. The global energy crises, merged with fears of exponentially worsening climate change have ultimately landed on our front door step. We can no longer avoid these issues that have been put off for so long. Awesome progress has been made, led by developing nations and all must follow suit, for any lasting change to occur. My stance can be summed up in this quote by Bruce Barton, an early twentieth century congressmen. – “When you're through changing, you're through”

This simple yet deep excerpt cements my feelings towards the situation at hand. If constant change is not embraced and adopted for the overall betterment, we as a world society will in essence be through. There is no doubt that decisions we make today, affect the world and all its inhabitants of tomorrow. We as international community posses the tools needed. Bright minds from all over the world continue to clash with these momentous issues. Currently there are no limits that can be set on the potential of solar energy due to constant production and technologic advances of photovoltaic cells. At the same time unquestionable economic, benefits are achieved through the development of these projects / devices. Jobs are created, while the growth occurs through local and international business. Basic human needs of light cooking and heat are met, as well as the eventual halt of all greenhouse gas emissions. Socially, all aspects of education are improved, progress in gender equality is made, and lastly people with the potential of light have more freedom than ever before to pursue goals and dreams until now never thought possible. 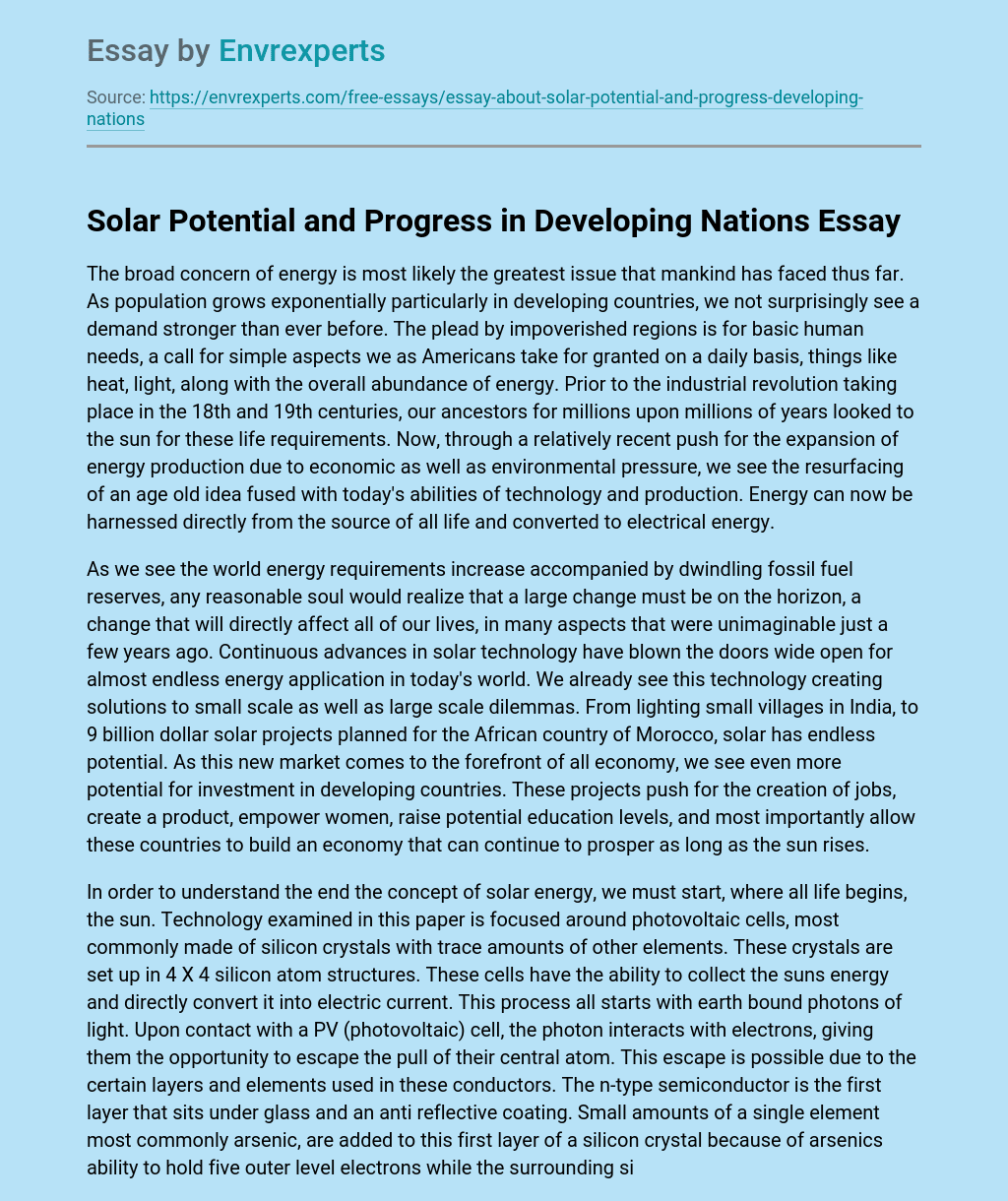