Solectron was founded in 1977 with the initial objective of producing solar energy products as part of the solar energy boom that was occurring during the 1970s. When the company started to struggle financially, they ventured off and started building assemblies which focused primarily on printed circuit boards for other electronics firms (Simchi- Levi, Kaminsky & Simchi-Levi, 2008). It was during the 1980s that Solectron turned their attention towards contract manufacturing and changing their printed circuit boards business into an import industry. Throughout the 1990s, the company went through many strategic acquisitions in which they purchased manufacturing facilities of their customers, and by doing so they received long-term contracts to supply those customers (Simchi-Levi et al.

Don’t waste time
Get a verified writer to help you with Solectron: Front Contract Manufacturer to Global Supply Chain Integrator
Hire writer
$35.80 for a 2-page paper

, 2008).
Unfortunately, with the economic downturn that occurred during 2001, Solectron was hit hard in which their stock price fell 77 percent while their market capitalization was 40 percent of the company’s revenues. Slowly the company started to bounce back in which they were known as the “world’s premier supply chain integrator with having .

7 billion in annual revenue” (Simchi-Levi et al., 2008 p. 295). Even after this, the demand started decreasing at Solectron, primarily with their telecommunications customers, which was something the company had never encountered.

Over the history of the company, their value to their customers has changed dramatically. This can be seen with Solectron’s culture and mission statements changing focus on putting the customer first and improving their partnerships. Simchi-Levi et al., (2008) state that this was achieved by providing products and services of the greatest value through innovation and excellence all while being the best while constantly improving.

It is also stated within the case study that another important element of success can be found in the quality and culture that has been instilled at Solectron (Simchi-Levi et al., 2008). Research has been proved to illustrate the fact that company culture is important to the success of a business. A study that focused on 759 companies in 17 different markets found that company culture was an important driver of innovation more than labor and capital (Rao & Weintraub, 2013).
Even though Solectron faced many issues such as financial and struggling in the telecommunications industry, they were still able to provide excellent value to their customers. This was proven by winning the Baldrige National Quality Award which they were the first in the contract manufacturing industry to win. Solectron also evolved from being a printed circuit board supplier into a company that provided high-quality manufacturing services of electronics. This constant change of Solectron has allowed them to win more than 250 service and quality awards from their customers (Simchi-Levi et al., 2008).

Solectron’s global expansion has contributed to their ability to move from a contract manufacturing supplier to a supply chain integrator. This has been done by the size and scope of services that they offer in which has been increased. Global expansion has helped the companies pull-push production system, information distortion, and bullwhip effect, which has reduced lead times and risk pooling. With risk pooling, this has allowed Solectron to be able to save costs by using resource utilization, improving production planning, and improving their customer service (Simchi-Levi et al., 2008). Risk pooling is used in supply chain management to reduce demand variability through diverse customer bases (Hu, Ke, Liu & Zhang, 2018). Global expansion has also influenced Solectron concerning being able to decrease the bullwhip effect due to their direct dealings with the suppliers. Also, when it relates to the companies lead times, this has been able to be reduced which has also improved their global expansion since the company now has locations closer to their customers (Simchi-Levi et al., 2008).

Research has stated that acquisitions are transactions that reflect the market for corporate control, in which management teams vie for the control of firms’ productive assets (Zollo & Singh, 2004). Solectron over time has been able to successfully integrate its acquisitions by purchasing customer facilities which has been done with business integration teams and checklists, all while using a specific integration plan (Simchi-Levi et al., 2008). Within the case study, it is stated that the culture and acquisition integration in the company and its success has led to four to eight people who represent functional areas such as finance, operations, human resources, and information technology (Simchi-Levi et al., 2008). This has allowed Solectron to develop a detailed integration plan which involved participation from the companies that were acquired to ensure that they were equally involved in the process. Also, to further improve the successful integration of acquisitions, Solectron had these teams work and train together three to six months after the acquisitions were completed (Simchi-Levi et al., 2008).

Impact of Company’s Culture Throughout the Numerous Changes

Throughout the case study, it is stated that with Solectron winning quality awards, this has been an impact on the culture of the business especially since the economic downfall that occurred in 2001 (Simchi-Levi et al., 2008). The companies culture focuses on providing the highest quality and their belief that the customers should always come first. With the economic downturn, Solectron focused on fulfilling the customers’ forecasts (Simchi-Levi et al., 2008). In 2001, when the company was facing troubles, this resulted in a decreasing demand and excess inventory which caused the company to completely restructure which involved decreasing staff and closing facilities. Even though the company was facing such hardships which also impacted the company’s culture and mission, they remained positive because their core values and beliefs where what helped them through the hard times (Simchi-Levi et al., 2008). The core values and beliefs helped Solectron because it provided guiding principles and the philosophy of the business as well as providing clarity (Manohar & Pandit, 2014).

The case study states that in the future, Solectron should be able to add additional products and services to what they already offer. These products and services would be new markets, developing components of high quality, and improving their logistics (Simchi-Levi et al., 2008). Solectron believes in two major components being its culture and customers, but even with the downfall of 2001 they still have a positive outlook. Research has stated that contract manufacturing is a mode of doing business, where the manufacturers attributed by their high quality and low-cost manufacturing while offering their resources to manufacture customer’s products under contractual agreements (Rahim, Voon & Mahdi, 2016). Besides the previously mentioned products and services that Solectron can add in the future, the case study also stated that the company will experience an increase in the original equipment manufacturers while the electronics manufacturing services industry is expected to increase (Simchi-Levi et al., 2008).

What to do in the Short/Long-Term

The case study states that for the company to continue with future growth, they should have a short-term goal of including research and development in investing in low-cost Asian markets, and also a restructure that deals with facility closures and reductions within the workforce (Simchi-Levi et al., 2008). This should also incorporate acquisitions in new startup technology companies in Africa and Asia (Simchi-Levi et al., 2008). With the long-term, Solectron needs to continue diversifying products during the research and development stages. This is because the company will see a decrease in the use of outsourcing as an OEM strategy. Also, in the long-term, the company needs to continue joint ventures with businesses that are top leaders in technology such as Ericsson and IBM. With maintaining these joint ventures, it would allow the company to work together with their suppliers and partners all while retaining and growing the level of trust (Simchi-Levi et al., 2008). 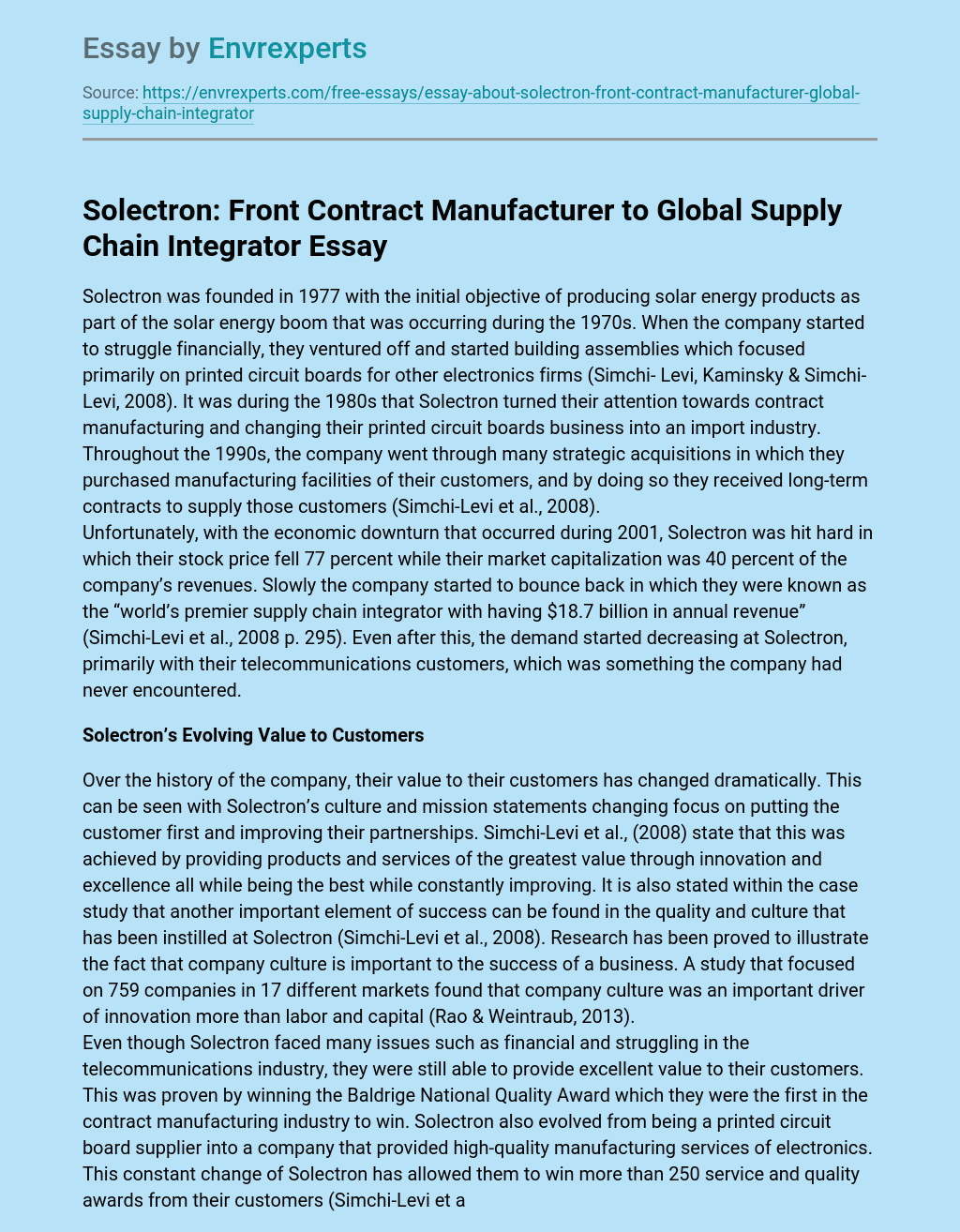