Source of Pollutant in China

Ambient arsenic originates from natural sources and is found widely in the environment, as it is one of the most abundant elements in the earth’s crust. Arsenic occurs as a major constituent in more than 200 minerals and according to Ahoulé et al in an analysis in Africa, published in 2015, highlighted that the most common sources of arsenic in the natural environment are in iron oxides, sulphide minerals, volcanic rocks and geothermal waters. The study further highlighted that the reductive dissolution of iron oxides and hydroxides, evaporation/transpiration (evapotranspiration) and competitive interaction between hydrogen carbonate and arsenic have been seen to increase the concentration of arsenic in groundwater, with evapotranspiration being the leading cause.

Don’t waste time
Get a verified writer to help you with Source of Pollutant in China
Hire writer
$35.80 for a 2-page paper

However, there seems to be mobilization of arsenic from sediments into groundwater by two means:

He and Chalet in 2013 highlighted a number of main events for the mobilization of arsenic in surface and groundwater.

These include mineral precipitation and dissolution, adsorption/desorption, chemical transformation, ion exchange and biologic activity. These may be due to a high evaporation rate and low recharge rate. Elevated pH of water causes rapid arsenate desorption and allows bonding between arsenate and solids. This is because carbonates and silicates dissolute causing cations to exchange. Burial of fresh organic matter, infiltration of fresh DOC and the slow diffusion of oxygen through sediments lead to reducing conditions in superficial groundwater and in the presence of iron reducing bacteria, causes arsenic to be released.

Sulfide oxidation is also major as arsenic-bearing minerals can release great amount of arsenic when the chemical environment has been changed. In an oxygen rich environment, there is oxidation of these minerals followed by arsenic mobilization through runoff and groundwater flow into surface and ground waters.
Arsenic in the environment also mobilizes during soil erosion and volcanic eruption events. However, it is believed that anthropogenic activities play a more important role in air pollution. Fossil fuel combustion is one of the most popular ways for this to happen. He and Chalet (2013) looked at the issue in China where the combustion of coal is the principle source of China’s outdoor air pollution. This is because China relies on coal for 70–75% of its energy needs, consuming 1.9 billion tons of coal each year and it was estimated atmospheric arsenic emission from coal combustion reached 1500 tons by China for year 2005. A study of arsenic concentration in atmospheric particles (PM2.5 and PM10) was done and results shew that the arsenic concentration in the air was 43.36 ng/m3 (11.98–82.55 ng/m3) in Taiyuan, 24.4 ng/m3 in Guangzhou and 0.32 ± 0.17 mg/m3 (0.07–0.79 mg/m3) in Beijing.
The WHO in 2001 highlighted that anthropogenic activities commit almost three times the amount of arsenic to the environment than natural activities. Mining and smelting activities tend to be one of major activities that contributes arsenic to air or water. According to He and Chalet, up to 70% of total arsenic is abandoned as tailing by mine selections process with only 10% of total arsenic being recovered with the remaining portion being kept in intermediate material or found in solid waste residue and wastewaters. In Hechi, Guangxi Province, arsenic acute poisoning happened at least three times between 2001 and 2008 as there was an increasing number of smelters, used in pyrometallurgical operations, being built in that region, famous as a non-ferrous metal-rich-area. Similar observations were made in 14 counties along the Texas-Mexico border when there were rapid industrial developments in the region and in southwestern Spain where the region of Huelva was highly industrialized (Yadav & Turner, 2014).
Pesticide use is also one of the anthropogenic pollution sources. Inorganic arsenicals, such as lead, calcium, magnesium and zinc arsenate, zinc/sodium arsenite, acetoarsenite or organic arsenicals have been used extensively as agricultural chemicals. Those chemicals are generally used as herbicides, dessicants, antiseptics and toxic rat poisons. Countries such as China have banned their usage based on their level of toxicity. It was reported that well water had been contaminated by pesticide in Yangshan, Anhui Province (Chung et al., 2014).
Chemical industries are also seen as major contributors. Sulfuric acid manufacturing plants use arsenic bearing sulfide minerals as raw material and under-regulation of the industry, which may see illegal use of low-class mineral ores, tends to lead to pollution incidents. In the single year 2008, in China, Heishui River of Guizhou, Groundwater of Chenxi, Hunan and Yangzonghai Lake of Yunnan were all polluted by sulfuric acid production plants.
Motor vehicles are seen as a source of fine particles of arsenic during dust events (Fang et al., 2012). It has also been observed that cities tend to have higher concentration than suburban areas. The explanantion given by Gonzalez-Castanedo et al., (2015) is that this may be due to dust resuspension by the road traffic and urban activites. The article also spoke of the secondary aerosols produced from the combustion of residual/fuel oil from industrial processes. \nHow the pollutant enters the atmosphere and water system
Arsenic has many oxidation states — as As (0), or ionic forms, such as arsenate (As(V)), arsenite (As(III)) and arsine (As(III)). This causes for interaction with oxygen or other molecules present in air, water, or soil. They are also able to interact with bacteria that live in soil or sediments and the form becomes changed (Chung et al, 2014).
Dry deposition is one of the ways in which arsenic enters the atmosphere.
One of the properties of arsenic in different oxidation states is that it is readily dissolvable in liquid medium. And as such, arsenic can contaminate lakes, rivers, or underground water by dissolving in rain, snow, or through discarded industrial wastes (Chung, Yu, &amp; Hong, 2014). He and Charlet (2013) discussed the high arsenic content of the water in the rural areas of China whilst they highlighted that the accessibility to safe drinking water is a major challenge. Their research showed that by the end of 2010, the rural population with safe drinking water was 670 million, and only 54.7% of rural population had tap water. This was linked to the fact that these areas were located in arid or semi-arid zones. They documented and mapped the cases of high arsenic concentration in groundwater. The table and map below shows this information.

Source of Pollutant in China. (2021, Oct 31). Retrieved from http://envrexperts.com/free-essays/essay-about-source-pollutant-china 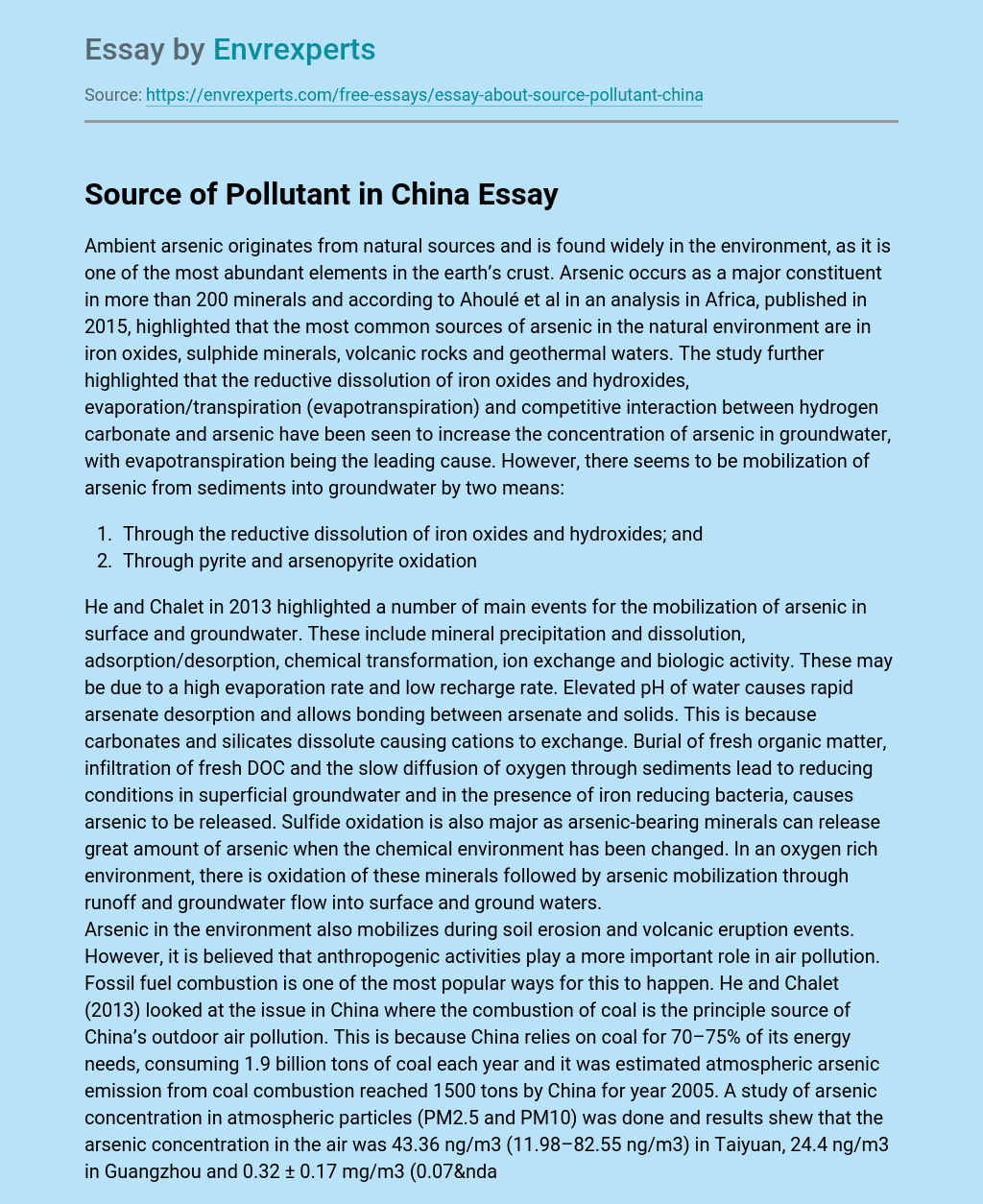