Sources of Air Pollution in the World

Our environment is affected by our daily actions. The earth is plagued with land, air and water pollution. Some of the problems we face on earth are: deforestation, nuclear waste, acid rain, global warming, overpopulation and some animals are endangered.

Air pollution has many different sources. Power-generated plants, oil refineries, chemical plants, and steel mills contribute to about 140 million tons of pollutants into the air every year. Automobiles account for at least 80 percent, of air pollution; the heaviest polluter.

Another type of air pollution is acid rain.

Don’t waste time
Get a verified writer to help you with Sources of Air Pollution in the World
Hire writer
$35.80 for a 2-page paper

Acid rain is formed when sulfur and nitrogen are distributed from factories, automobiles and power plants. The sulfur and nitrogen rise up into the clouds and come back down as rain that is contaminated. It damages forests, crops and soils. It also kills fish and animals that live in the water.

It required all of the states to form plans to rid air pollution. Sewage, pesticides, fertilizers, industrial chemicals, oil and litter are the leading causes of water pollution. These pollutants get into the water, contaminating our drinking water. Poor cities such as Mexico City, Cairo and Shanghai have no choice but to drink contaminated water. These people suffer form diseases such as typhoid, cholera and dysentery. These diseases come from microorganisms in contaminated water.

In 1965 Congress passed the Water Quality Act of 1965. This act gave states one year to set standards to better the quality of the water within their boundaries.

Land pollution is a threat to our environment. The United States, account for 1 billion pounds of solid waste, thrown away everyday. Manufacturers package products in excessive packaging. Solid waste such as tires, diapers and plastics are buried in landfills each year. It takes generations for them to decompose.

Today, there are laws that penalize manufacturing plants that dispose hazardous wastes. These plants dump these hazardous materials in nearby woods or dump them into streams (this practice was common fifty years ago). We need rain forests for survival. Rain forests pump fresh oxygen into the atmosphere, protect soil from erosion and absorb carbon dioxide. Rain forests cover 4.5 billion acres and accounts for 7 percent of the earth's land. The Amazon in Brazil is the largest rain forest (2 million acres). The fate of today's rain forest is in trouble. A process called deforestation is the leading problem. Deforestation is the process of cutting down forests to use the land for farming and grazing cattle. Farmers "slash and burn" forest turning them into desert land.

Nations have come together and promised to ban the manufacturing of chlorofluoro-carbons (CFCs). These CFCs are the leading cause of the depletion of the ozone layer. Aerosol spray cans and coolants for refrigerators and air conditioners are some products, which produce CFCs.

Overpopulation affects the natural environment. In 1996, the population was at 5.75 billion people, with a rate of 250,000-increase everyday. As the population increase, the earth's natural resources decrease. In order to decrease population, some countries are educating people on different ways of birth control. Some countries are taking extreme measures, by cutting off any type of government assistance, for having over a certain amount of children.

Biologists have discovered that the extinction of a species in an ecosystem (lake, forest, ocean, or a swamp) can cause the destruction of that ecosystem. In 1992, 158 countries signed a treaty in order to protect biodiversity. All of the countries had to conduct a census of all the endanger species, ban the trade of endangered species and pass a law to protect the species. We as a whole need to realize the earth is in trouble. A lot is being done, but not enough. As countries become industrialized, it pushes the earth to the point of breakdown. Educational programs need to be implemented on ways to better the earth.

Sources of Air Pollution in the World. (2021, Oct 31). Retrieved from http://envrexperts.com/free-essays/essay-about-sources-air-pollution-world 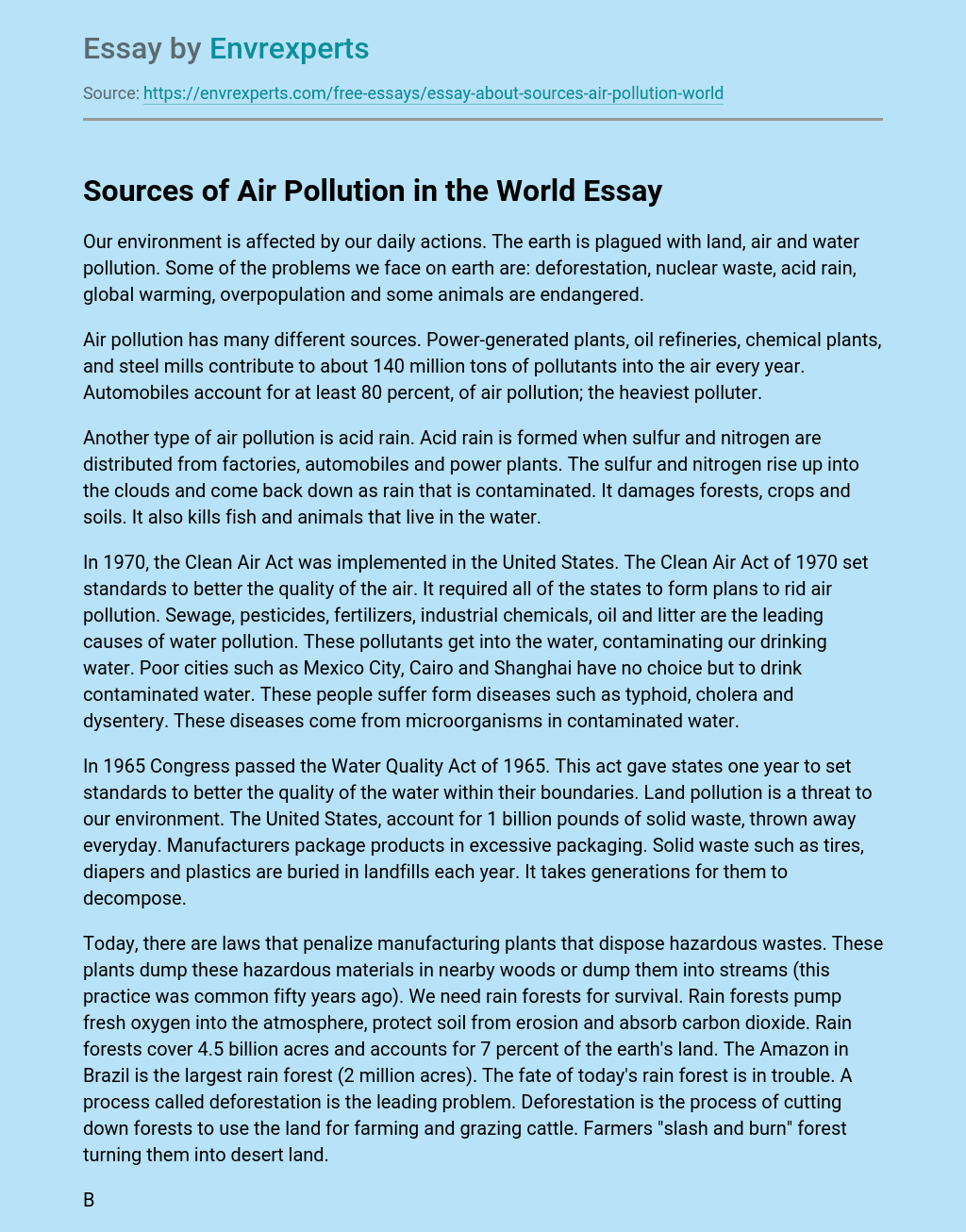