Don’t waste time
Get a verified writer to help you with Spiritual Ecology
Hire writer
$35.80 for a 2-page paper

Humanity has to reassess our attitudes towards ecological crisis and our responsibilities towards nature.

Science alone is not enough to argue for an ecological change, there must be a spiritual awaking in order to change humanities attitudes towards our responsibility for nature. Humanity must reconstruct our attitudes towards the earth and our spiritual connection towards it. There must be a spiritual connection to the earth before tackling ecological issues. Spiritual ecologist see our ecological crisis has to do with the fact that we lack a connection with nature and that there is a need of a spirituality when addressing environmental crisis.

Spiritual Ecology of Carolyn Merchant Ecology text, explores how spirituality can promote an attitude change towards ecological degradation. By first addressing how first spirituality or monotheistic religious narrative broke off humanity from nature. Furthermore, describing how narratives shaped action against nature and can eventually be changed to help nature. When addressing the “recovery narratives”, Merchant describes how these narratives have the ability to either challenge humanities attitude towards nature or justify it.

“Two grand historical narratives explain how the human species arrived at the present moment in history. Both are recovery narratives, but two stories have two different plots, on upward and one downward.” (311). The first narrative is a traditional biblical monotheism narrative, describing the fall from the garden of Eden but how the garden can be redeemed through redemption. Merchant criticize this narrative by stating that it antagonizes nature. “But after the couple disobeys God, the ground is cursed.” (351).

By separating god from nature, causes man to gain the right to dominate nature. Alluding that monotheism represents a break from nature, creating a dualistic view for humanity to see and act on nature. This narrative encourages humanity to recover the garden of Eden – paradise. The etymology of the word paradise is an enclosed garden or park. Going back to this idea that monotheism illustrates to us this idea that in order to get back to the garden of Eden to get back to paradise we have to dominate and control nature. That Nature is a garden that needs humanity to control it. Monotheism separated humanity from nature and legitimized the need to human domination and control of nature. By adapting Judeo Christian religions humanity loss, the connection to nature. These religions legitimized exploitation of nature and removed that scared connection humanity once shared with nature.

The second narrative depicts a decline of a prehistorically past in which the world was ecologically more pristine and society was more equitable for all persons and for both genders. Merchant gives an example of Environmentalist narrative, Max Oeslchalaegar describes the Paleolithic people as hunters who were content with their oneness to Magna Mater. Stating that these people were just as intelligent as their modern counterparts – agriculturist. That once people began to become agriculturist and adapt monotheism religions, humanity lost that connection the Magna Mater. “Differences between humans and animals, male and female, people and nature became more distant. Humanity lost the intimacy it once had with Mgna Mater.”(318). Moreover, illustrating not only the dualistic view humanity adapted towards nature but between themselves.

Merchant goes on to describe the feminist narrative; through recounting how the overthrow of female deities by male deities resulted in not only in the female oppression but in environmental exploitation. The feminist narrative illustrates the important relationship between woman and nature. “In the biblical expulsion story, Eve, the serpent, nature, and the body are all relegated, after the Fall, to the lowest levels of being.” (323). The usage of her language shows the dualistic hierarchy of nature being placed beneath man, while linking the domination of nature with that of the domination of women. Nature by man is constituted as female; therefore, must be controlled and made submissive. Nature and women are linked, because they both are subjected to the attempt of suppression and control by men. Drawing on the theme that women and nature are connected, based on the monotheistic produced ideology of dualism that authorizes man to oppress both. However, Merchant concludes that this narrative wants to reverse the biblical narrative and dismantle the dualistic hierarchal view it has produced.

Merchant criticize the issue of “recovery” narratives, claiming them as a problem themselves. The narrative embedded an ethic that gives permission to persons to act a certain way to nature or to people (325). Although, narratives shape action they can be challenged. “Naming the narrative gives people the power to change it, to move outside it, and to reconstruct it. “325 By giving a narrative to a crisis we give it a worth. And that narrative leads us to what or how we take on that action. Leading us the vision of process theology, which is the idea that “the welfare of humanity and the welfare of other creatures are interdependent.” (351). Process theology believes that all things in creation are in relationship with one another. That God is not a separate entity, but appears in many forms in various environments. In our actions lies god, we possess the godly ability to do good and produce a positive action.

Spiritual ecologist wants to reconstruct the narrative humanity has towards nature because of monotheism. Through spirituality, ecological issues can be addressed on another level. Environmental degradation will be viewed not as separate from humanity, but as one of the same. Humanity must gain the relationship it once had with nature, in order to truly feel any form of responsibility. Our current state of dualistic attitude towards ecological crisis, cause us to be unaware or indifferent to our mistreatment of nature. 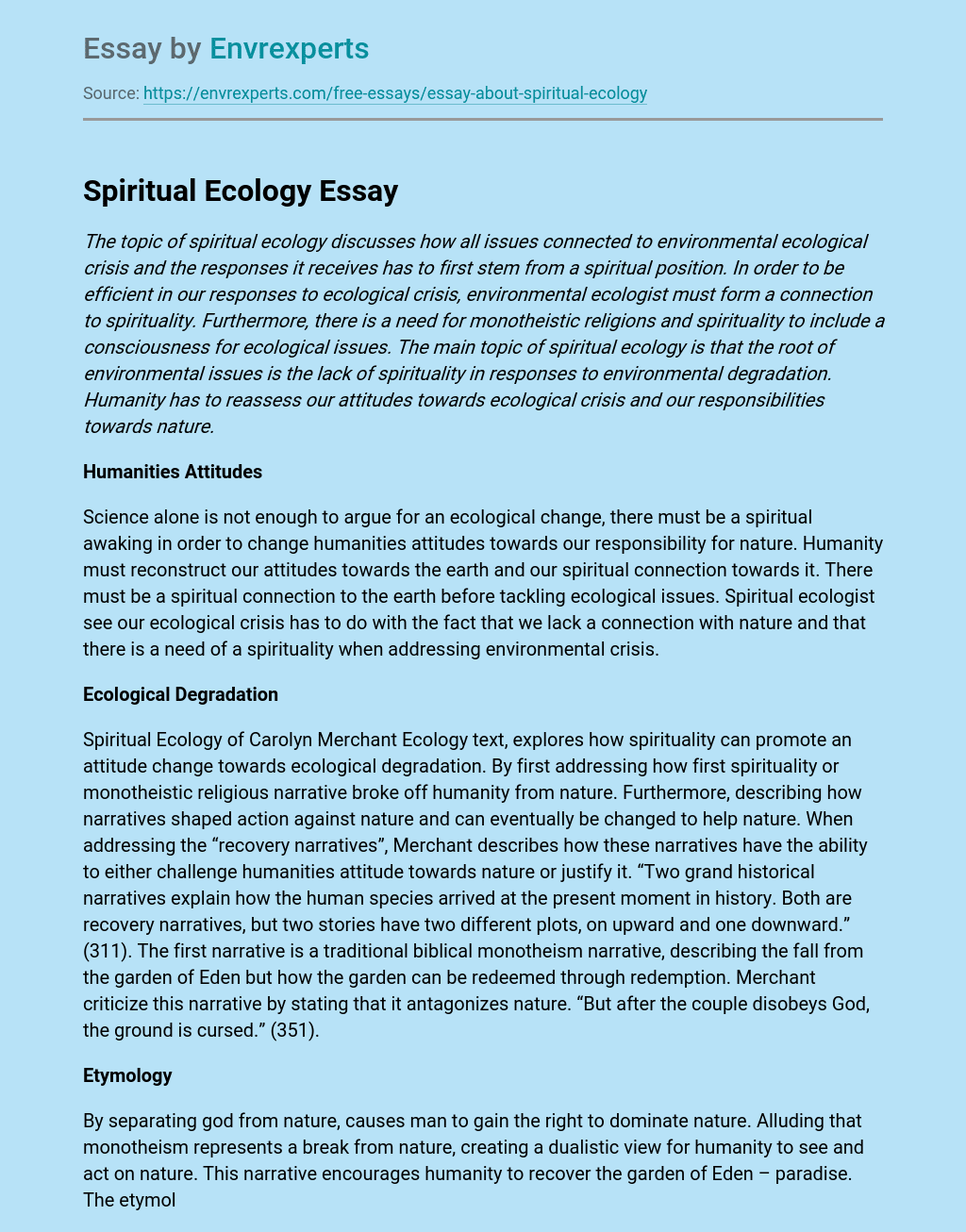