A Strong Argument Against Deforestation

Have you ever thought about how important forests are in life? The trees in your surrounding seem unimportant as you go about daily life, acknowledging them only as the scenery and background in your life. But if you think about it, trees are everywhere in life. Your furniture, paper you write on, fruit you eat, even the air you breathe comes from trees. We, as consumers rely heavily on trees and forests as resources, but forests are shrinking instead of growing, all because of deforestation.

Don’t waste time
Get a verified writer to help you with A Strong Argument Against Deforestation
Hire writer
$35.80 for a 2-page paper

Deforestation is an important issue. It is a problem that stems from our misuse of resources. According to the Food and Agriculture Organization of the UN, from 2000 to 2010, an estimated amount of 13 million hectares of forest were lost per year because of deforestation. And what do we do all this for? Benefits to companies, industrialization, expansion for factories. People see deforestation as a beneficial action, as they are gaining resources and clearing land for usage, but what people don't understand is that cutting these trees affects us more than we believe.

All deforestation does is damage, whether it be people or the wildlife, cutting down forests harms more than it helps.

By clearing forests, we are causing the decline of wildlife. We destroy habitats and increase the vulnerability of animals, and therefore threatening Earth's biodiversity. About 80% of the world's documented species live in tropical rainforests (Greenpeace), and when we cut down these forests, we threaten the animals and harm their homes.

Water cycles are disrupted as trees can't evaporate groundwater, which causes the surrounding climate to become much drier. Soil erosion is accelerated because trees are no longer there to protect and keep the soil in place. Generally speaking, through deforestation, we are disrupting and harming wildlife, which causes an imbalance in the environment. The disruption and destruction of forests also destabilizes oxygen sources and greenhouse gas emissions. Forests play an important role in both the containment of carbon dioxide and the purification of air through oxygen. The loss of forests makes up about six to twelve percent of annual global carbon dioxide emissions. When forests are cut down, carbon absorption stops, and the carbon already stored in the trees is released into the atmosphere. Deforestation also affects global climate change and global warming. Trees are our main way of storing carbon dioxide, but if we continue cutting trees down and allowing the carbon dioxide to escape into the air, the climate would change drastically, and global warming would most likely speed up. Every year, due to deforestation, an estimated amount of 1.5 billion tons of carbon dioxide is released into the air. Trees are our main source of oxygen, and by cutting these trees down, we are only hurting ourselves and our future (CO2 Emissions From Forest Loss – see below). When it comes to the future lives of humans, deforestation also poses a threat. The economic importance of forests would impact the quality of our lives, especially so for the millions of people who rely directly and heavily on forests. Those who rely on collecting natural resources or hunting and gathering in forests would be heavily impacted. This economic blowback may also cause social conflicts over resources and other such issues. Damage to nature could halve living standards for the poor and reduce global GDP by about 7% by 2050 (BBC News).

As stated previously, all deforestation does is harm. So the next time you pass a tree or a park, take a moment to appreciate it and all it has done for people. Take a moment to think about the future lives of your descendants and family, and think about what would happen if there was a significant lack of forests. Think about the environment and how you could help. Plant a tree, become an advocate against deforestation and forest degradation, start protests against harming the environment. Put a little effort into saving Earth, and think about a future that you helped make better.

A Strong Argument Against Deforestation. (2021, Oct 31). Retrieved from http://envrexperts.com/free-essays/essay-about-strong-argument-against-deforestation 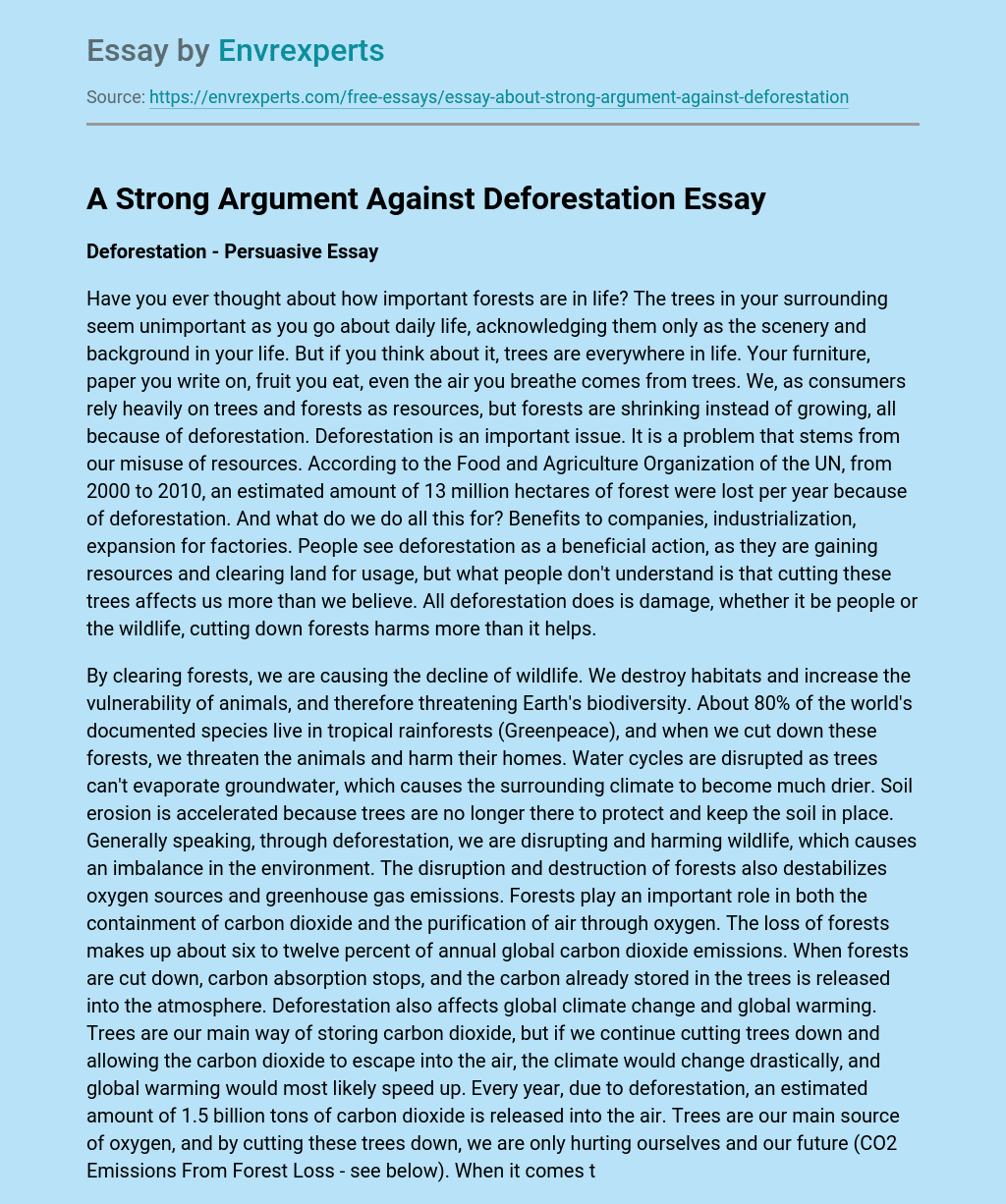