Animal release, also known as fang sheng in Chinese, is one minor aspect of conflictsbetween development of economy and environmental protection. But it brings much moreproblems than we thought. Because of the lack of professional guidance andsupervision animal releases have caused a series of environmental accidents includingeconomic loss and species invasions and resulted in a large number of excess death ofrelease animals. In fact, fang sheng is a special culture behavior whose point is todemonstrate compassion and earn merit. Today, fang sheng is making a comeback, especiallyamong the young and well-off.

Don’t waste time
Get a verified writer to help you with The Strong Effects of Animal Release on the Development of Economic and Environmental Protection
Hire writer
$35.80 for a 2-page paper

In this article, I mainly discussed the adverse impacts ofenvironment and economy. In order to alleviate the negative impacts of fang sheng, possiblereasons and solutions from social, legal and educational aspects are also discussed.To Be or Not To Be: Dangerous Situation about Animal Release in ChinaWith the development of economy and improvement on life quality, more and morepeople are tending to free captive animals to the wild in order to achieve inner peace,resulting in the destruction of ecological equilibrium.

Though releasing animals in a recklessmanner had already aroused much concern of researchers and scholars, it had not caughtenough attention from the social aspect. In fact, freeing wild animals is a specific problem ofAsia, or more precisely, of China. Influenced by Buddhism for a long time, many Chinesebelieve the cause and effect theory more or less. They believe saving lives could bring themgood luck in the other life, thus releasing animals under no instruction and with nopermission. This behavior not only brings about ecological problems, but also causes hugeloss in economy.

This paper mainly discusses the adverse impacts of freeing captive animals.It also introduces the reasons behind and methods to maximum possible changes.

Fang sheng and its influences to species

Every species has a story to tell and every endangered and extinct species has a sad one(Environment: an interdisciplinary anthology, 2008). But one race is approaching the end because of a rather good intention. They used to be famous for long life, but now they'reknown for rapidly decreasing numbers. They are sea turtles. In the late nineteenth century, seaturtles were caught for turtle shell jewelry and petting. In this case, many animals defenderscome to buy living turtles and send them back to the sea, which exacerbating the poaching ofturtles. At the same time, some released turtles died for not adapting to the environment.Other survived ones damaged the local ecological chains. There are many sad storied aboutendangered species, but turtles' story is especially sad for they are suffering from people'skindness. This is what unreasonable animal releasing brings about.Although there is no clear evidence showing that fang sheng causes any specific speciesto die out, it definitely worsens the situation for the following three aspects.In the first place, fang sheng without professional instructions will cause the death of thereleased animals themselves. Because of lack of essential science knowledge, releasersrelease animals at inappropriate time or to improper places, resulting in enormous amount ofanimals dead. The Economist (2015) reported that around 200m fish, snakes, turtles, birdsand even ants are released each year. More than half of the released animals die per annumwhose number reaches incredible 100 million (Phoenix News, 2005). What is worse, the deadanimals may also bring pathogen to locals. This is how pathogen spread from the farm tonature. For example, African clawed frogs, one of the favorite species of releasers, carry afatal kind of pathogen, Batrachochytrium dendrobatidis, causing millions of local frogs deadevery year (China Environment News, 2016).

But to animals released recklessly, to live sometimes is worse than to die. It is due to thesecond, also the most serious aspect: non-native invasion. Non-native invasion is consideredas one of the three causes for endangerment and extinction (JM Diamond, 1989). Casesbecome dramatically obvious in freeing animals. Due to releases, many food fishes andornamental fishes throughout the world are put into China's rivers and lakes. In the north, most of these fish die in winter. But in the south, the scavenger, guppy and tilapiaincreasewhile the number of indigenous species is decreasing day by day (Chinese NationalGeography, 2014.5). Species invasion breaks the law of local species and changes predationrelations.The last point is about pseudoextinctions. The pseudoextinction is when the original orancestral species has become transformed by evolution into another species. A cross betweenalien and local species would product new genes. If this situation lasts for long, the puresubspecies will be pseudoextinct, giving rise to the loss of biodiversity (Bagheera, 2017).Above all, all these factors influence the ecological chain and account for species extinction.In many cases the interaction between these factors can exacerbate the destruction ofecological balance

Fang sheng and its influences to economy

Compared to its ecological impacts, the economical influences are less obvious. Freeingwild animals exert pressures on economy mainly by two ways. The first is it encourages theillegal industrial chain in poaching. The large demand of animals promotes the formation ofpoaching chain and even into the cycle chain. This illegal trade is observed in almost all thetourist attractions of Buddhism. It is reported that a so-called 'free bird' is often costing thelives of 20 birds to capture it (Legal Daily, 2015). The Economist (2015) found that fangsheng associations can rake in around 1m yuan ($157,000) in annual donations.The second adverse impact on economy is the conflicts between releasedanimals and residents. Because of releasing large amount of non-native animals at a time,economic crop damage becomes common. In Taishan of Shandong province, 4 years ago itwas noticed that the number of mountain squirrels are increasing dramatically. Their need forfood and water results in total loss of fruit walnut production. Crop destruction can bedisastrous for communities as most of the crops grown are for subsistence and only one crop can be grown per person (Environment, 2008).Reasons behind and methods to change the situation

Legal factors on this issue: Lack of judicial supervision is counted as a significant reasonfor uncontrolled releasing behaviors. Gong Minghao et al. (2017) posited the view that for along time, release activities in China have been in the absence of professional guidance andlegal supervision. The management on this issue has not been promoted until the newrevision of the Law of the PRC on the Protection of Wildlife in 2016 introduced provisions ofanimal release, provided clear and unequivocal legal basis for supervision and control toanimal release, and met the actual need of current nature conservation in China. Theysuggested to formulate the regulation of animal releasing, and build the technical standardsand management process of animal release including the environment ,the number and thefitness and environmental impacts of releasing animals[]as well as the monitoring plan after.In Hong Kong, releasing fish to lakes without permission would be fined 2000 yuan and putinto prison for 14 days. But legal ways is not enough in this situation.Social factors on this issue: With respect to moral supervision, animal release has longbeen a religion custom and is practiced widely in China, which made it become a widelyacknowledged behavior (Zhang, 2016). Zhang pointed that it brings more negative effects toenvironment as a whole, especially in modern time. The historical background leads to thewrong impression on fang sheng and leaves tough problems to handle. To tackle the barrier,there are two ways to improve the situation. Firstly, Zhang mentioned that standards shouldbe strengthened and guidance should be given to Buddhism. Buddhism should influenceadherents in a positive way as a religion stands for good. Taking Taiwan for example, itsgovernment and scientists would publish manual instructions on releasing animals correctlywith eminent monk (Chinese National Geography, 2014). Due to this action, some religious groups have already taken apart in protecting habitats instead of animal release. In addition,the media concerned should increase their coverage as well.Educational factors on this issue: Among all the three factors, education is the most farreaching but least concerned factor. Most people are not aware that there is an educationalaspect exerting influence on animal release. As my personal experience, I can always findpeddles selling animals to children at school gates. Children would throw them away whenget tired. It is the germination of reckless animal release. The main reason behind is theneglect of relevant agencies on popular science education. Taiwan sets a good example for usas its government set classrooms for animal release in natural museum 20 years ag. (ChinaYouth News, 2016). Compared to legal methods, mild measures in education work better.

Animal release, also known as fang sheng, is becoming more and more common, leadingto the increasing adverse impacts on environment and economy. Adverse impacts of fangsheng mainly include the impacts on species caused by three factors and on economy in twoways. Though for a kind intention, animal releasing was still a human disturbance to naturalecosystem/]it should be banned and replaced by the program of field conservation to reach itsreligious goal consistently in the long term. Because this phenomenon only occurs in eastAsia, little study is been done on this topic. A summative research needs to be done in thefuture. But to improve the situation permanently, education about biology and environmentprotection should be in the first place.

The Strong Effects of Animal Release on the Development of Economic and Environmental Protection. (2021, Oct 31). Retrieved from http://envrexperts.com/free-essays/essay-about-strong-effects-animal-release-development-economic-and-environmental-protection 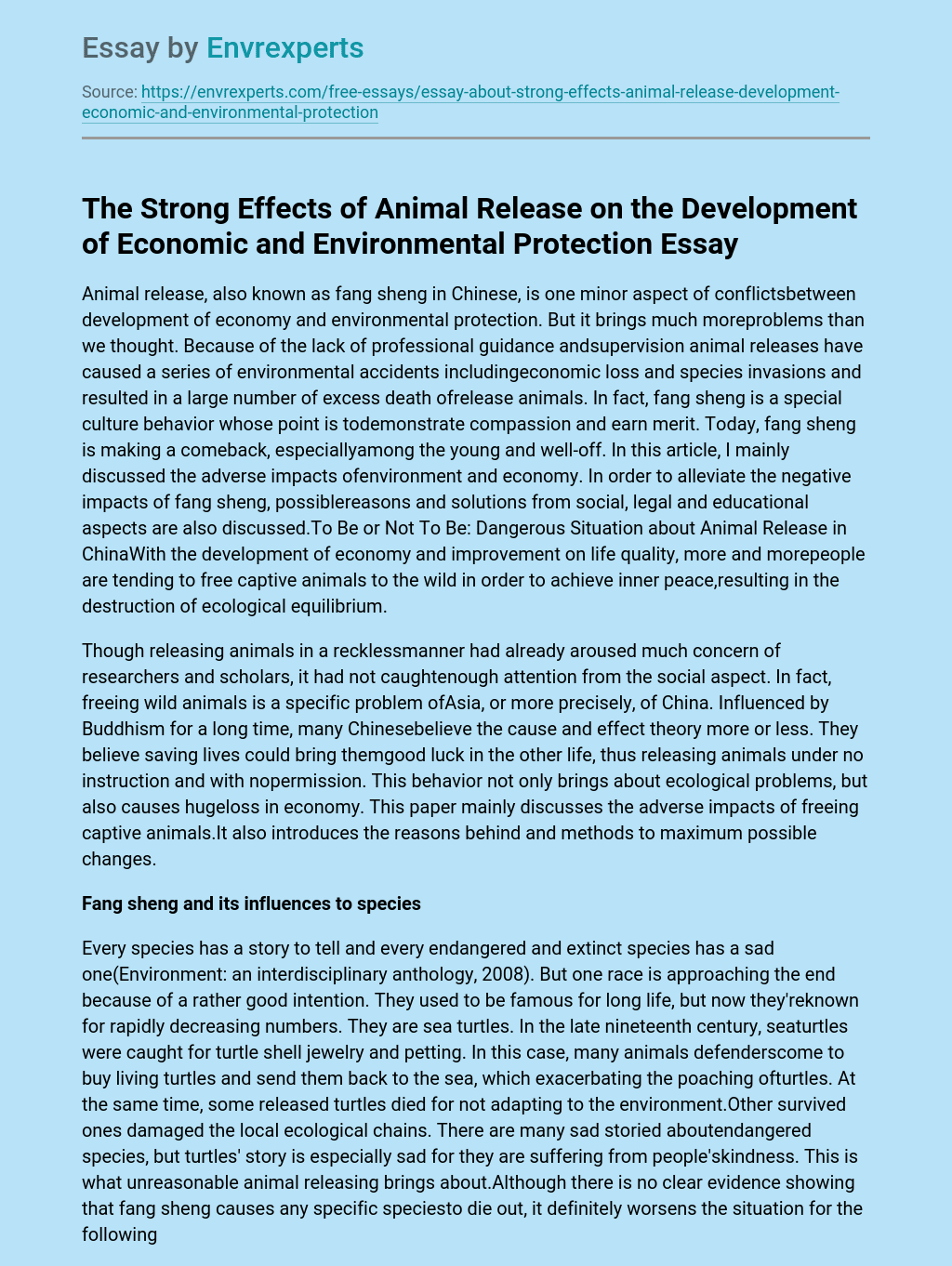