The literature review of our research was carried out using research articles, text books and data on reputed web sites. The main search engine we are using is pubmed. Many studies have done regarding knowledge, attitudes and practices regarding air pollution worldwide as well as in Srilanka.

Don’t waste time
Get a verified writer to help you with Student`s Knowledge about Air Pollution
Hire writer
$35.80 for a 2-page paper

A descriptive cross sectional study was done on the knowledge and ideas of students about air pollution in Tehran- Iran and a comparison with other countries by Taraneh Yazdanparast et al. using a closed form questionnaire, using 2140 school children of guidance school and high school students of Tehran as their sample.

Volunteer students in 1-6 grade levels consisting 1360 males and 780 females were given the questionnaire under guidance of their teachers. The closed form questionnaire was developed by getting information from a questionnaire which had been used by Boyes et al and questions were of two types; cognitive and affective. It was consisted of composition of clean air, nature of air pollution, the consequences of air pollution, acid rain and the greenhouse effect. Data were analysed using SPSS version 11.

Iranian students were more aware that the N2 is a component of the clean air, air pollution causes asthma, heart diseases and lung diseases and more greenhouse effect nowadays than the British, Australian and Chinese students. But they have statistically significant low knowledge about acid rains than the British and Chinese and it is high regarding the knowledge about Australian students. (Taraneh Yazdanparast et al,2013).

A descriptive cross sectional study was conducted to assess environmental health, knowledge, attitude and behaviour among verbally voluntarily consented 185 high school students in USA Southeast Texas school district by Israel G. Msengi et al using a questionnaire consisted of 35 core questions which had 7 true and false questions ranging from liker type one to four and data was analysed by SPSS version 22 and univariate and bivariate analysis. High school students have significant knowledge about environmental triggers for asthma (68.6%). But most of them were not aware that smoking is the no.1 risk factor for lung cancers. 25% of them didn’t know that car exhaust causes greenhouse effect. On conclusion they found that age classification and work status has no significance difference regarding environmental health attitude but the location of the school and ethnicity have an impact (Israel G. Msengi et al,2017).

A nested multiple case study regarding air pollution awareness was conducted by Funda AYDIN-GUC et al in a sample of 32 pre service teachers and 122 primary school grade 4 students in Turkey using a air pollution awareness questionnaire which consisted of 7 questions, Know-Want-Form and interview. On conclusion results from Know-Want-Form and air pollution awareness questionnaire it proved that pre service teachers do not have sufficient knowledge to prevent air pollution. ( Funda AYDIN-GUC et al, 2018).\nA similar type of study about the knowledge and attitudes about air pollution among the secondary school students in Hong – Kong was conducted by Stephen Pui- ming Yeung,Edward Boyes and Martin Stanisstreet ,using a closed form questionnaire which was distributed among 977 students in year 1(12/13 years old),year 3(14/15 years old) and year 5(16/17 years old). Male/Female ratio of this cohort was 37/63. The questionnaire has been developed by taking information from a free response questionnaire which had been issued over 700 UK students. Questionnaire consisted of 49 items which assess the knowledge about composition of unpolluted air, the nature of air pollution, the biological consequences of air pollution, acid rain and greenhouse effect. Five point likert scale was used to avoid using central/ neutral responses. Most of the students knew that O2 is a constituent of unpolluted air (80%,90%,91% from each year respectively.79% of the students knew that the water vapour is a constituent of air. Lower percentage of students knew that the N2 is a constituent of air (62%). Most students are unsure whether pollutants are present in unpolluted air such as CFC, nitrogen oxides and sulphur dioxide.

A cross sectional survey was conducted to assess the knowledge and perceptions of air pollution in Ningbo, China by Xujun Quian et al using 1604 house holders ages between 14 to 65 years using a questionnaire and face to face interview style. Questionnaire was consisted of 24 items regarding three aspects; demographic characteristics (age, gender, educational level, residence, occupation), knowledge and attitudes regarding air pollution. 848 households were selected from 6 districts and 5 counties. Data ware analysed using descriptive statistics chi square test and multiple unconditional logistic regression analysis. Awareness about the haze and its adverse effects was 64.59% and there was significant difference between age groups. Most (78.8%) of the responders concern about possible aggrevation of haze and its protective measures, 85.22% were concern about air quality index ,66.77% have taken protective measures indoors such as using purifiers, putting up green plants and using activated carbon and 48.5% has worn facemasks. On conclusion this study shows higher awareness about haze with respect to previous studies done in china.( Xujun Quian et al,2016). 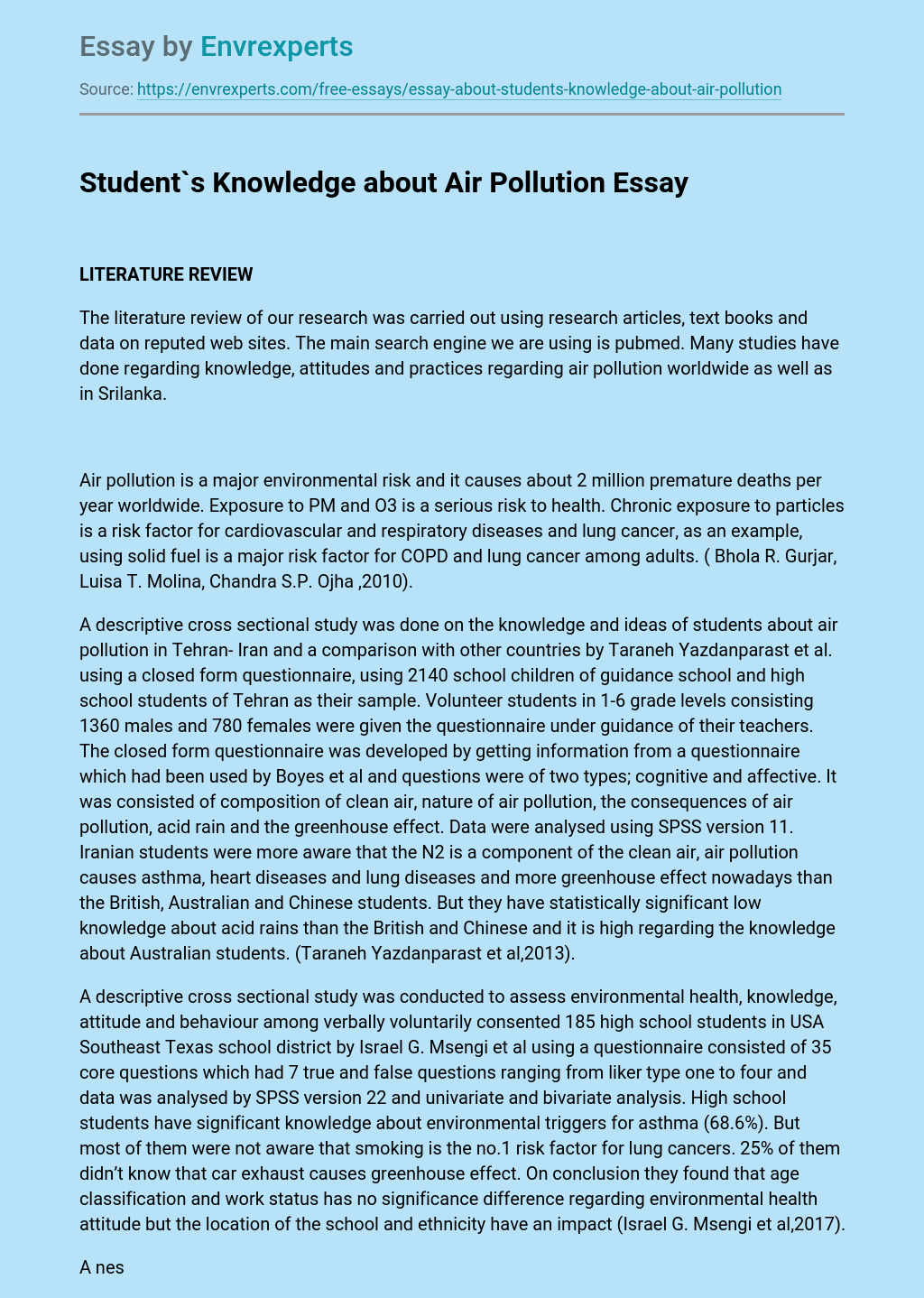