A Study on Global Warming

Don’t waste time
Get a verified writer to help you with A Study on Global Warming
Hire writer
$35.80 for a 2-page paper

Examples of solar radiation are present in such examples as the Little Ice Age, where the Earth cooled considerably due to a decrease in radiation. In addition, some scientists believe that the link between carbon dioxide and global temperature increase is not as significant as other scientists claim it to be.

In this paper, there are many terms that need to be defined for comprehension.

NASA is the National Aeronautics and Space Administration, an executive agency of the United States government responsible for scientific research involving aeronautics and aerospace. Carbon dioxide is a colorless, odorless chemical that is a gas at room temperature with the chemical formula of CO2. A greenhouse gas is a gas in the atmosphere that contains the radiation that is reflected back towards space from the Earth, an example of which is carbon dioxide. TSI, or total solar irradiance, is the sum of all the radiation that the sun emits at a specific point in time.

What Global Warming Is Global warming is the increase in the average surface temperature of the Earth. This warming can cause ice cap melting in the polar regions of the Earth, a change in wind and precipitation patterns, as well a change in the growing seasons, which can cause damage to many ecosystems (“Global Warming”). There are many sides to the debate on this topic, including whether the phenomenon is truly occurring or not, and if it is, what it is caused by. The phenomenon, according to data from NASA, is real, based on temperature readings from the past 120 years that show an increase of approximately .6 degrees Celsius from the mean temperature between 1951 and 1980 ("Main"). Some scientists say that the amount of warming is even greater, around 1 degree Celsius (“Global Warming"). However, the debate on what the warming shown by the data is caused by is still ongoing, with many people subscribing to the theory that the increase in manmade carbon dioxide in the atmosphere is to blame.

Why Carbon Dioxide is not to Blame

The Role of the Sun in Warming the Earth

The solar constant is a misnomer that scientists have termed the total amount of radiation that is given off by the Sun. The term “solar constant” is a misnomer because the radiation that is given off by the Sun is not actually a constant number, and should therefore be called "solar variability.” This is proven by recent data that shows an average variance in solar radiation of . 2%, or about two watts per meter squared. Using current data, scientists have linked the solar radiation levels to the amount of sunspots there are on the Sun. They have found that the fewer sunspots there are at a specific point in time, the less radiation that is given off by the Sun. Using this knowledge, a trend developed that showed that approximately every eleven years, the Sun goes through a cycle in the number of sunspots (“Solar”). A team led by Ilya Usoskin of the University of Oulu in Finland has discovered that even though there is a cycle of the number of sunspots, the number of total sunspots has been increasing for the past 50 years (Behreandt). Since the amount of sunspots has been increasing, the relationship between sunspots and solar radiation means that the amount of radiation has also been increasing. Eigel Friis-Christiensen and Henrik Svensmark, a pair of scientists, wrote in the peer-reviewed journal Advances in Space Research that the correlation between the total solar irradiance and the surface temperature in North America is .86 (Friis-Christiensen and Svensmark). This value for a correlation is fairly high, which means that the temperature data follows the trend that the TSI data set closely. Since solar radiation has increased over the past 50 years, and the data has shown that an increase in solar radiation leads to higher surface temperatures, the chance that the warming that has been recorded over the past decades is due to the increase in solar radiation is very probable.

The Little Ice Age and Its Implications

The relationship between the Maunder Minimum and the drop in temperature during the Little Ice Age shows that solar radiation can play a large role on the Earth in cooling it down when there is less radiation. Because this statement has been proven true by the data, the opposite of the statement, that more radiation would play a significant role in warming the Earth, is also true.

Solar Radiation, Cloud Cover, and the Role of Clouds

Clouds, depending on the type, can either warm or cool the Earth. Low clouds have a cooling effect on the Earth, because they are larger in volume than high clouds, and have a larger albedo, a measure of reflectivity. On the contrary, high clouds have a lower albedo, so they allow for more radiation to pass through. Clouds can also work in a way that is similar to the greenhouse gases, reflecting infrared radiation back towards Earth (Pallé Bagó and Butler). Satellite data has shown a 3% decrease in cloud cover between the solar minimum in 1987 and the maximum in 1990. This decrease was mainly in the amount of lower clouds, and not higher clouds (Friis-Christiensen and Svensmark). This means that a higher irradiance would cause a higher concentration of high clouds over low clouds. Since there were less low clouds, there was a smaller albedo, and more radiation was able to reach the surface of the Earth during the solar maximum.

The 3% decrease in cloud cover is the equivalent of an increase of 1 to 1.5 watts per meter squared in radiation. During the same time frame, the change in the amount of radiation was .1%, which would be approximately .25 watts per meter squared more in radiation. The change in cloud cover allowed for between four and six times as much radiation change as solar radiation alone (Friis-Christiensen and Svensmark). This shows that cloud cover can impact the temperature of Earth by a substantial amount, because if cloud cover is reduced, like during a solar maximum, the amount of radiation introduced can be amplified, thereby increasing the surface temperature of the Earth.

Current data has shown that the solar radiation has been decreasing recently, but global temperatures seem to still be increasing. Many scientists consider this to be evidence that solar radiation could not be causing global warming (Connor). However, this interpretation of the data may not be true. According to NASA, during the winter of 2008, the polar ice caps only covered 30% of the area in the Arctic, compared to the 50-60% that the caps used to cover (Cole and Renfrow). This decrease from 50-60% to 30% shows that the ice caps covering the Arctic have lost about half of the ice they used to hold. Just like clouds, ice also has albedo. Because it is able to reflect so much radiation, ice's albedo is extremely high. Due to of the drop in ice levels, the albedo of the area has decreased along with the amount of ice. This means that less solar radiation can be reflected back into space by the ice. Due to this process occurring, less solar radiation is then needed to warm the Earth, because more of the solar radiation is kept within the Earth's atmosphere, and less is reflected back out into space. Furthermore, since less radiation is needed to warm the Earth, the decreasing amount of radiation emitted by the Sun may still cause the surface temperature to rise.

The data that many scientists use as evidence for the greenhouse gas explanation of global warming do not tell the whole story. The truth is, carbon dioxide is not a very strong greenhouse gas, and the amounts of the gas in context with the entire of the atmosphere are very small. A more likely scenario for the warming of the Earth is through solar radiation. The amount of solar radiation can vary, which has been statistically shown to cause the variance in the surface temperatures on Earth. Scientists have evidence that shows the solar irradiance has increased, which would increase the temperature of Earth. This, in concert with the increase in the concentration of high clouds over low clouds, has been shown using statistics to have a high correlation with the increase in temperature. Also, even though the levels of solar radiation may have dropped, the temperature is still increasing. This is because as the temperatures have increased, the levels of ice have dropped, lowering the albedo of the Earth. This means that less solar radiation is needed to achieve the same amount of warming. Global warming is caused mainly by the consequences, both indirect and direct, of solar radiation, and not by the increase in manmade carbon emissions.

A Study on Global Warming. (2021, Oct 31). Retrieved from http://envrexperts.com/free-essays/essay-about-study-global-warming 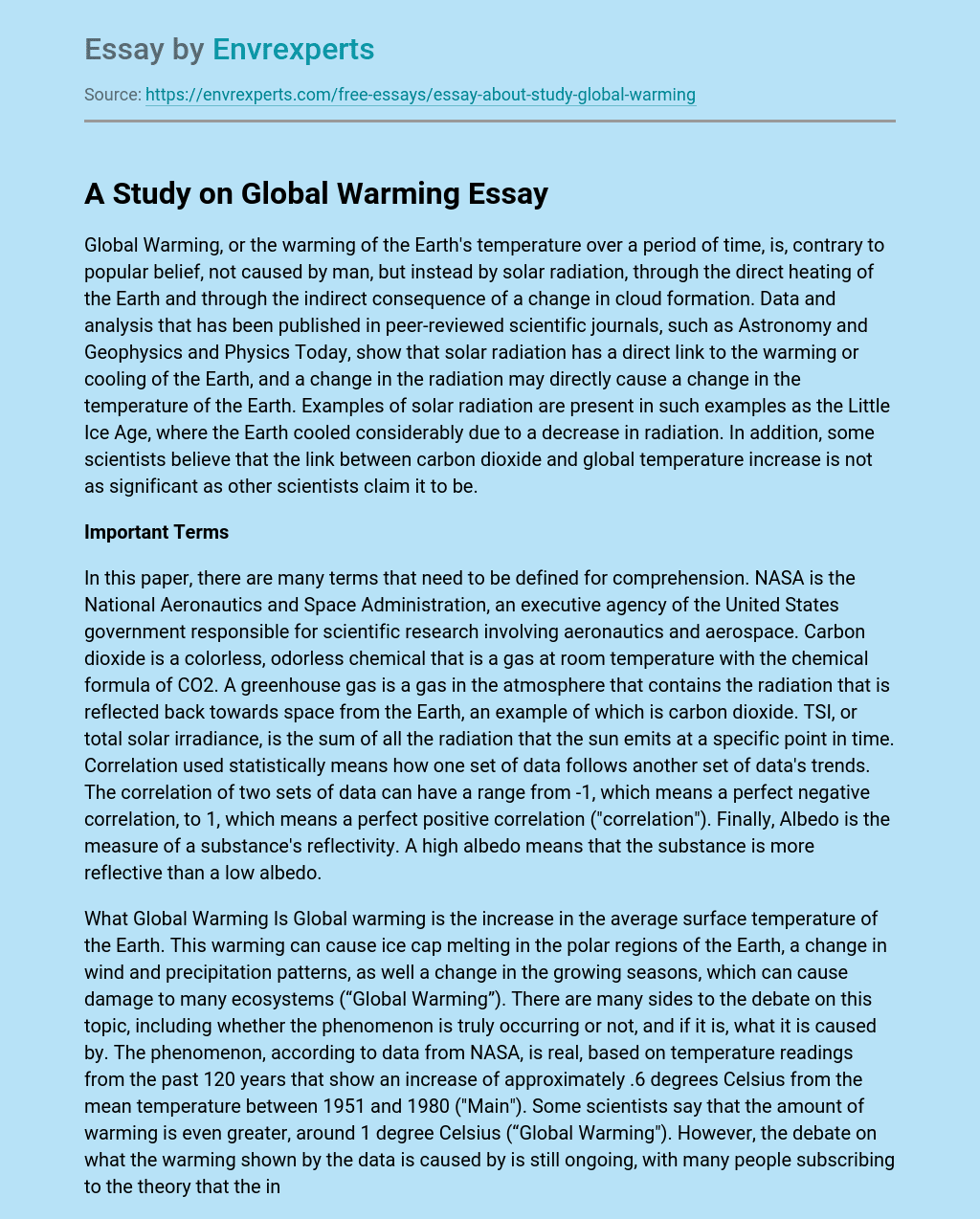