Global warming has impacted ecosystems in many ways. It can be attributed to anthropogenic causes, such as the burning of fossil fuels, as well as natural causes, such as volcanoes. When carbon dioxide escapes into the atmosphere it acts as a blanket by trapping UV rays from the sun, keeping them close to earth thus creating much higher temperatures and warmer climates. People do not realize how much global warming actually impacts ecosystems
and how it relates to their fitness and survival.

Don’t waste time
Get a verified writer to help you with Study Made by Dillon Et Al on the Effects of Global Warming on Ecosystems
Hire writer
$35.80 for a 2-page paper

Deutsch et al. (2008) conducted a study correlating global warming, latitudes, and insect fitness, was done to prove just how important of an effect these rising temperatures have on insects living in various ecosystems. Dillon et al. (2010) built upon this study in correlating the effects of global warming and latitudes on ectotherm's metabolic rates.

The objective of the study by Deutsch et al. (2008), “Impacts of Climate Warming on 'Terrestrial Ectotherms across Latitude," was to see if there was a relationship between global warming and insect's fitness at various latitudes.

This study begins by hypothesizing that ectotherms are likely to be greatly influenced by the rising temperatures because, “their basic physiological functions such as locomotion, growth, and reproduction are strongly influenced by
environmental temperature” (Deutsch et al.

2008). The researchers also suggest that many organisms have a thermal tolerance, the amount of variation of heat an organism can survive within, that is proportional to various degrees of temperature that they are exposed to, which is also a characteristic of climate that increases with latitude (Deutsch et al. 2008).

In order to predict the physiological changes of the insects due to climate change hey estimated a thermal performance curve (Deutsch et al. 2008). To predict the impact of global warming in 2100 the researchers compared the relationship between seasonality and the insect's thermal safety margin (Deutsch et al. 2008). Deutsch et al. (2008) conclusion shows that on the basis of patterns of global warming tolerance, rising temperatures will effect insects in the tropics detrimentally by harming insect fitness and survival. They also concluded that insect fitness will likely increase in the mid and high latitudes due to warming (Deutsch et al. 2008). These findings are significant because the effects of global warming will be harmful to the tropics, the greatest place of diversity (Deutsch et al. 2008). The second study, “Global Metabolic Impacts of Recent Climate Warming,” correlates with the first study in that they both show that with the rising temperatures, ectotherms in the tropics will be negatively influenced. Both studies use climate change to predict ectotherms physiological responses: the first study is focused on the physiological change of ectotherm’s fitness in relation to warming and latitude, while the second study investigates metabolic rate of ectotherms in relation to warming and latitude (Deutsch et al. 2008) (Dillon et al. 2010).

However the first study uses their data to predict the future for ectotherms across the globe while the second study focuses on past and current years. Due to this difference, different formulas are used to calculate the results. The second study uses a formula that determines ectotherm's metabolic rates depending on their body mass and body temperature (Dillon et al. 2010). By using this formula and its relation to warming at various latitudes, the second study showed that ectotherm's metabolic rate increased greatly in the tropics, even though there was a small rise in temperature (Dillon et al. 2010). This is due to the temperature in the tropics already being a warm environment. By increasing an organism's metabolic rate proteins become denatured and
can eventually lead to death of an organism.

From these two studies we can see that global warming has a high impact on ectotherms. The results of both the studies show that ectotherms living in the tropics will have the greatest negative impact due to rising temperatures. Deutsch et al. (2008) and Dillon et al. (2010) therefore both have made significant contributions to the very-important field of preserving tropical diversity.

Study Made by Dillon Et Al on the Effects of Global Warming on Ecosystems. (2021, Oct 31). Retrieved from http://envrexperts.com/free-essays/essay-about-study-made-dillon-et-al-effects-global-warming-ecosystems 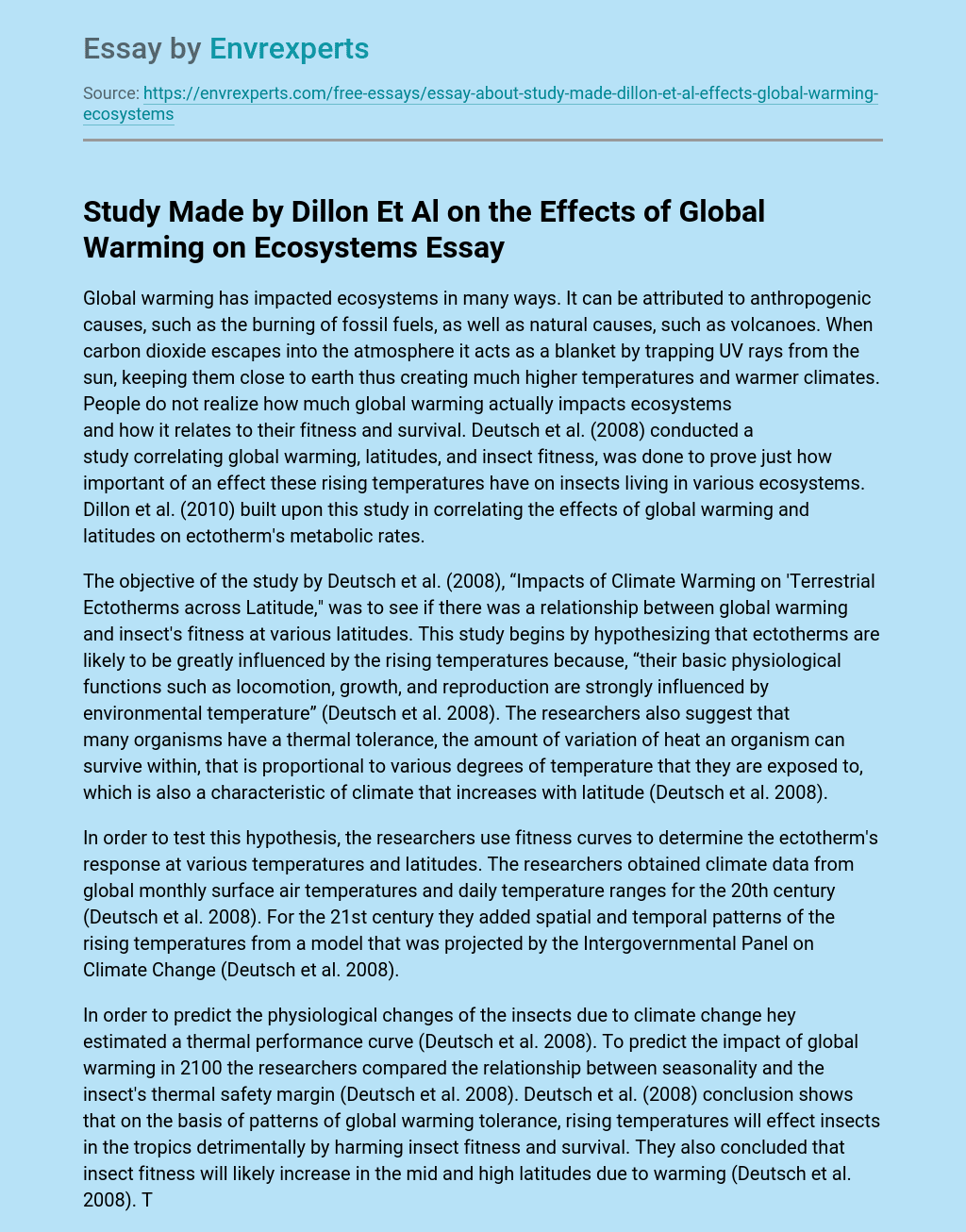