The city of Los Angeles started a media frenzy when it dumped over 96 million "shade balls" into a nearby reservoir on August 10. The idea, championed by Mayor Eric Garcetti, has produced a lively scientific debate among the experts in the field. The balls, black in color and filled with water so they wouldn't blow away, were supposed to save 300 million gallons of water annually for the state through reduced evaporation, and save taxpayers $250 million (McKay, 2015, writing for Fox News).

Don’t waste time
Get a verified writer to help you with A Study of the Scientific and Social Effects of Using Shade Balls in the Los Angeles Water Reservoir
Hire writer
$35.80 for a 2-page paper

The debates over the shade balls' color, cost efficiency, and possible alternatives have been the focus of the impassioned discussion.

Not all of the experts agree on the best color for the shade balls. They are essentially split between a white and a chrome color. However, they all agree that black is the worst color for the job. Consider this: if you go outside on a warm, sunny day wearing a black shirt, and then change into a white one, it will quickly become clear to you that the black absorbs the heat and the white generally reflects it.

The shade balls are covered in pure black carbon, which is added to the plastic in an effort to absorb ultraviolet rays. The idea was that the black would prevent the sunlight from reaching the water in the shade balls as well as below it. A white-or chrome colored ball might have allowed the sunlight to pass through unchallenged to affect the drinking water below. However, experts say that the black balls will absorb the sunlight, forming a thermal blanket, and in fact increase the evaporation rate, as well as creating a perfect bacterial breeding ground, as it would be warm, moist, and dark.

Some went far enough to call it a "bacterial nightmare" (McKay, 2015, writing for Fox News).

Many experts, in addition to the common observer, question the efficiency of the shade balls, both through cost and results. The city of Los Angeles purchased the 96 million through two companies, Artisan Screen Printing and XavierC LLC, with a cost of 36 cents a ball amounting to a total $34.5 million spent (Wagner, 2015, writing for NPR). The shade balls of supposed to save 300 million gallons annually through reducing evaporation by almost 90 percent-enough to supply drinking water for up to 8,100 people (Howard, 2015, writing for National Geographic). 300 million sounds like a lot, but to put it in context the city of Los Angeles uses an average of 139 potable gallons a day-PER PERSON! (Stevens, 2015, writing for the LA Times). And the cost to purchase that 300 million gallons elsewhere-about only 2 million dollars, a trivial amount compared to the $34.5 million spent on the shade balls (Maddaus, 2015, writing for LA Weekly). However, an additional benefit of the shade balls has been largely overlooked. In addition to lessening algae growth, the shade balls should prevent the formation of bromate. This carcinogen is produced when bromide and chlorine, found naturally in most lakes and used to combat bacteria, respectively, react together in sunlight (Howard, 2015, writing for National Geographic). Bromate would have quickly contaminated all of the water found in the reservoir, making it undrinkable, if the shade balls had not been introduced. The prevented evaporation, as it turns out, is merely a plus (Guo, 2015, writing for the Washington Post).

Although controversial, the shade balls seem to be the best option for Los Angeles. The other possible alternative included building a bisecting dam and using two floating metal covers to protect the water, if built the largest in the world. Additionally, another reservoir would have had to be built while the covers were being installed, because that reservoir would be unusable for a time. However, this option would have cost well over 300 million dollars, far more than the $34.5 million spent on the shade balls (LADWP, 2015). The shade balls (specifically the black ones) have a lifespan of approximately 10 years, when they will split at the seams, at which point they will be recycled and replaced by another 96 million (Heck, 2015, writing for ABC News). That means there will be $20 million dollars saved through the shade balls compared to the $34.5 million price of the shade balls, not a great exchange (Stevens, 2015, writing for the LA Times). Plastics in general leak chemicals into the water, so there was some worry that the shade balls, or their carbon black coverings, would ooze their chemicals into the water over time, contaminating it. However, the plastic of the shade balls, as well as the carbon black coverings (safe as a pigment) are food grade, actually used in water pipes worldwide, and yes, approved to be in direct contact with drinking water (Liboiron, 2015, writing for Discard Studies). There was also the concern that the plastic would fragment into microplastics, which although generally smaller than a grain of rice, could puncture a lung if ingested. The LADWP has assured everyone that they have found no evidence of microplastics, nor do they expect to find any, yet they will continue to scan for them (LADWP, 2015). Overall, the shade balls appear to be the best option for Los Angeles and seem to have no ecological or sanitary repercussions.

The Los Angeles Reservoir, located in Sylmar, holds 3.3 billion gallons of water (The Herald Recorder, 2015). It is covered by 96 million shade balls, which is one of the many ways California has lowered its water use by over 15 percent in the last two years during its prolonged drought (Loomis, 2015, writing for the Arizona Central). Shade balls have been used in various Californian reservoirs since 2008, but now in such a large scale until now. The debates over the color, cost efficiency, and possible alternatives of the shade balls have been the focus of the impassioned discussion, which has produced exciting scientific innovation and groundbreaking research in the constant struggle to prevent California from dying of thirst-just about every day. The city of Los Angeles has recently added the final 20,000 shade balls to the reservoir. Now it is 96 million … and counting.

A Study of the Scientific and Social Effects of Using Shade Balls in the Los Angeles Water Reservoir. (2021, Oct 31). Retrieved from http://envrexperts.com/free-essays/essay-about-study-scientific-and-social-effects-using-shade-balls-los-angeles-water-reservoir 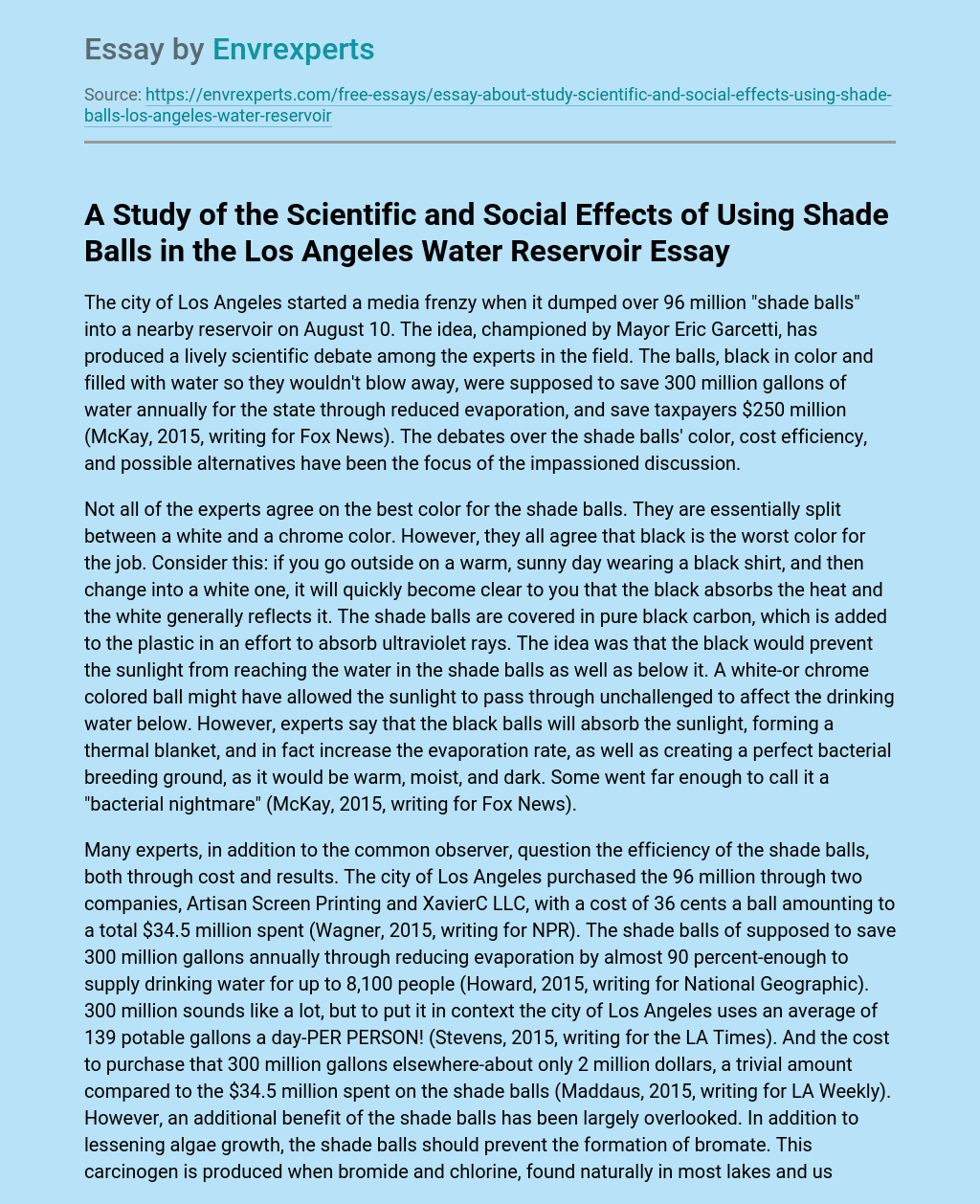