A Study on Water Scarcity

Water scarcity is a major problem faced in many places throughout the world. Texas, like many other areas, is lacking the water quantity necessary to sustain the water needs of its habitants.Many Texans helpto conserve water by reducing the amount that is usually consumedin activities such as irrigation and car washing. However, another solution proposed by the public sector is to privatize water. According to Madeline Baer, Assistant Professorof Political Science at San Diego State University, the term water privatization describes a contract or agreement between a public agency and a non-public institution (Baer 144).

Don’t waste time
Get a verified writer to help you with A Study on Water Scarcity
Hire writer
$35.80 for a 2-page paper

Texans have to look beyond the benefits supporters usually mention, and look at the disadvantages that water privatization brings to the State. At the end of the day what private companies promise is nothing more than words to please the ears. Water privatization allows this companies to build their own set of rules, meaning that government involvement is limited. The private companies get to decide how much they want to earn back from their investment, so the company sets the prize the consumer has to pay for water Texas should not privatize water because privatization leads to corruption,rate increase, and decrease access to clean water for the poor.

Water privatization, in many cases, leds to corruption. Since the government has a limited involvement in the companies' activities, companies tend to abuse of their power. Baer mentions that“privatization reduces the role of the state, which is the primary responsible party for fulfilling human rights” (Baer 142).Private water companies in other countries have been caught performing acts of corruption. According to Susan Pronk, writer for the Upside Down World News website, “in Bolivia the SEMAPA has gone from one crisis to the next. Since the company was returned to public hands after the Water War of 2000, two general managers have been dismissed for acts of corruption” (Pronk 6). Places in Latin America have gone through the acts of corruption that leads to the unpopularity of water privatization. Countries such as Bolivia with high levels of poverty are driven by corruption, since the people have to do something to bring the breed to the table. Baer mention that many public companies in Latin America were bowing under the weight of corruption, inefficiency, and a lack of funding for public services, which had been drying up since the 1980s" (Baer 144)

Even though Texas is a strong state, there is no way to prevent corruption from happening. Private water companies only see water as a profitable commodity, seeking nothing more than the money of the citizens. According to Robert Glennon, Morris K. Udall Professor of Law and Public Policy at the Rogers College and a member of the Water Resources Research Center at the University of Arizona, "multinational corporations [are) exploiting the dire economic situation of poor people. Corrupt political regimes, often bribed by these companies, pay no heed to citizens' complaints” (Glennon 1890). While the companies receive a big amount of money, the money goes to their pockets rather than maintaining safe water lines for their clients. Glennon mentions that “if companies own water, they may distribute it unequally, favoring the wealthy who can pay more and politically powerful who can help in other ways” (Glennon 1893).

Water privatization leads to rate increases. According to Nicole Fabricant and Kathryn Hicks, writers for the Radical History Review for the Duke University Press, "the sudden and dramatic rise in prices for this critical resource…sparked intense political organizing. Popular mobilizations in and around Cochabamba began in early November 1999” (Fabricant 135). Private companies invest millions to buy the public sector and maintain its facilities in good shape. However, the private company has to gain back the money invested in the water plant purchased, and the only way to do so is by increasing the price of water. If the private corporation owns the water, the corporation can decide the price for the consumer. Glennon explains the huge costs involved: "a subsidiary of the Bechtel Corporation increased water rates by 35%” (Glennon 1890). Private corporations can supply clean water, but corporations tend to fail at supplying clean water. The reason is evident, the cost of the materials necessary to update the water plans are expensive. Glennon mentions that “to have a corporation put forward the huge amount of capital necessary to update the obsolete and decaying infrastructure of municipal water and sewer systems. By one federal estimate, it will require one trillion dollars over the next 20 years to replace aging sewer pipes and treatment plans” (Glennon 1892).

Of course, that is the reason why private companies increase rate, and prefer to serve the rich and politicians. Water privatization will surely affect the ability of low income families in Texas to afford water services. Many Texans cannot afford to pay more for their water services since the oil companies have been laying off many of their workers. The cleaner the water, the more expensive water becomes to the corporation and the consumer, that is the reason why sometimes companies fail to supply clean water. Glennon mentions, “As for water quality, private companies often resist undertaking expensive monitoring programs for low levels of pollutants. Corporations fear, often reasonably, that it will be difficult to recoup these costs through rate increases” (Glennon 1894).

Third, water privatization leads the poor to be unable to access clean water. According to Sebastian Galiani, contributor for the University of Chicago Press et al, privatization might be obtained at the cost of excluding the poor from access to water services (Galiani et al 84). Since the rates increase, the poor communities are unable to afford clean water. The rate increase leads these families to search for water in other places, such as rivers and lagoons. Water privatization could also cause the poor to be left without water, or be unable the receive the adequate services from their communities. Baer mentions, "Rate hikes, poor water quality, cut offs to poor customers, and lack of transparency plagued numerous contracts in Latin America, Africa and Asia” (Baer 141).

Provided that places in Latin America were affected by their rate hikes, poor water quality, and cut offs to customers. Texans could become vulnerable to the same problems involved in converting a public facility to private. Baer mentions that “inadequate access to water and sanitation is part of the cycle of poverty and underdevelopment that affects the majority of the developing world” (Baer 143). Those that live in poverty will not receive the same services as the rich, and the low income families might opt to consume water from rivers. Water is a human right, and it should be available to everyone in the world. Baer mentions, "The "water justice movement,” a global network of civil society organizations, argues that water is a fundamental human right and a resource that is too scarce and precious to be privately owned and managed” (Baer 145).

To conclude, water privatization is not a viable solution to water scarcity in Texas since it would be too costly to the habitants of the state. Private companies in control of water leads to corruption as seen in many cases in Latin America. Private companies increase rates on water services, since the companies are in charge and the costs are determined by the owner. Water privatization reduces the Government involvement in their affairs, making it impossible for the state to meddle in the company's plans and decisions. Water privatization is unaffordable for low income families, therefore unable to pay for the access to clean water. Water a natural resource should remain owned by nature and not by man.

A Study on Water Scarcity. (2021, Oct 31). Retrieved from http://envrexperts.com/free-essays/essay-about-study-water-scarcity 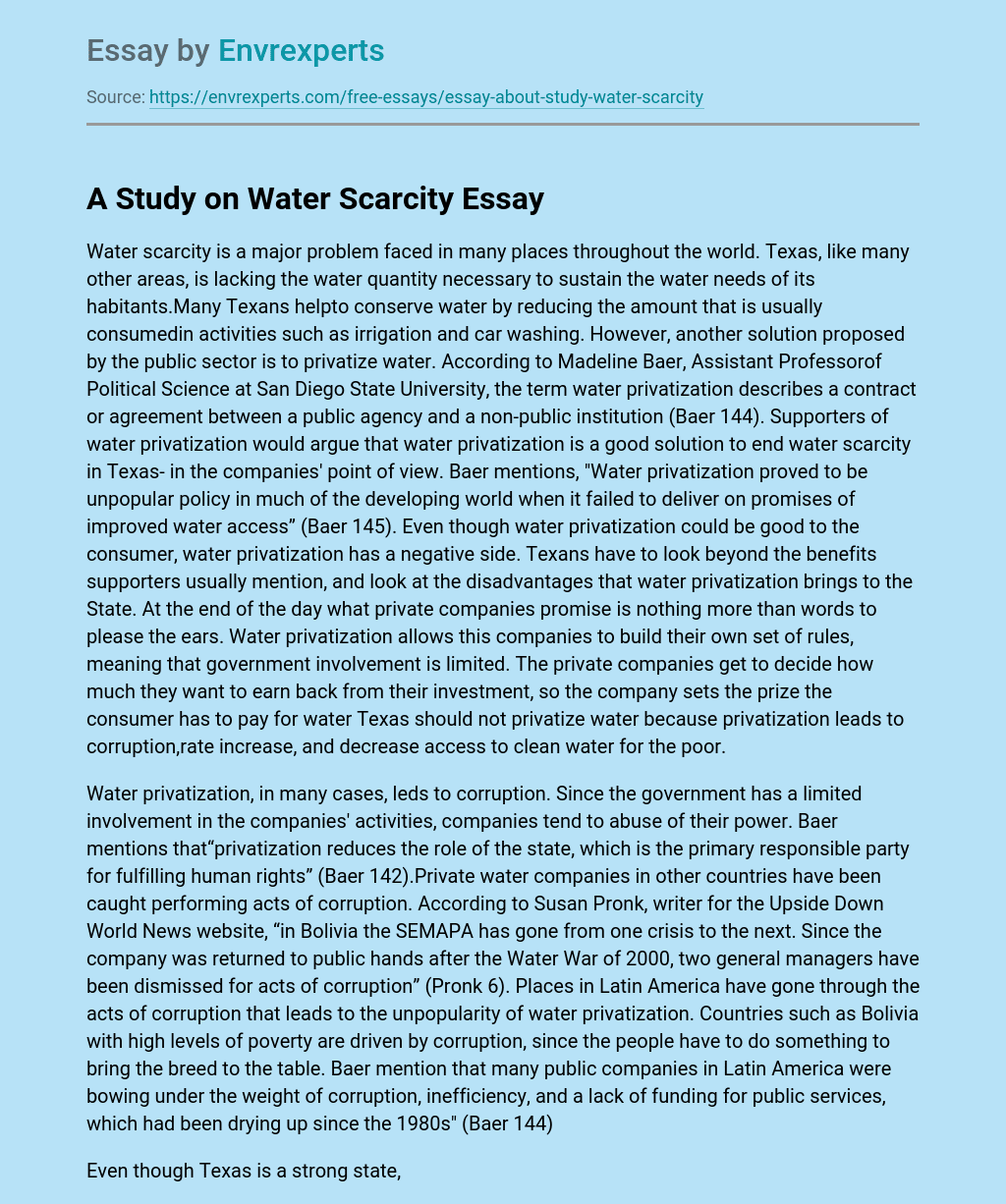