A Survey On the Health Effects of Pesticides

Don’t waste time
Get a verified writer to help you with A Survey On the Health Effects of Pesticides
Hire writer
$35.80 for a 2-page paper

Previous literature on potential health effects of pesticides first focused on the risks of acute intoxication among people with direct exposure. The availability of longitudinal data shifted the main concern to the risks of chronic intoxication and environmental contamination. More recently the concern moved to diseases such as cancer for which the risk is not associated to instant effects of pesticides but to chronic exposure.

Nowadays, the concern about latent effects is not only on people with direct exposure but also on subjects with indirect exposure such as consumers or residents of rural communities. Different risks associated with pesticides are often classified based on whether they have short-term effects (such as diarrhea, abdominal pain, headaches, nausea, vomiting, etc.) or long-term effects (such as skin diseases, cancer, depression, neurological deficits, diabetes, genetic disorders, or even death).

Since the existing literature in this topic is quite extensive and some other reviews have already been conducted (see, e.

g., Alavanja et al., 2004; Florax et al., 2005; Cocco, 2002; Garcia, 2003), we focused on studies from 2000 to the present. The literature review was conducted in March 2013, and we includedonly published studies with "pesticide" in the title and "health” in the title or abstract, or with "pesticide exposure" in the title?. The search tool was EBSCOhost, which includes Business Source, EconLit, Medline, GreenFile, among others sources. We found 527 original texts, and after excluding news articles, books, and non-related or repeated results, we ended up with a sample of 191 studies.

Not including studies published before 2000 lead to an underrepresentation of certain health effects that are not in the agenda anymore such as skin reactions. On the other hand, chronic diseases have received more attention lately and this is reflected on the high number of publications analyzing this types of disease.

A wide range of subjects are included in this category. We considered studies whose subjects are not only people who spray pesticides, but also who mix and load the pesticides, sow pesticide-seeds, weed and harvest sprayed crops, and clean and dispose containers. A total of 122 studies were found (63.9% of the total), and Table 1 in the appendix presents their most relevant features. Most of the statistically significant results are pesticide-specific so it is not possible to generalize regarding health effects of pesticides.

More general searches were tested, but only the -number of non-related papers increased substantially.

The evidence found in 3 studies suggests that high-intensity and cumulative pesticide exposure contributes to depression among pesticide applicators (see, e.g., Beseler et al., 2008). Different studies have been carried out analyzing the effects of pesticide exposure on the neurological function. Evidence relating long duration of farm work with decreasing levels of performance has been found, and one relevant factor might be chronic exposure to pesticides (Kamel et al., 2003). Results are mixed depending on the pesticide being analyzed: some of them suggest that neurologic symptoms are associated with cumulative exposure, but this is true only for some fumigants and insecticides (Kamel et al., 2005), and some pesticides, such as triallates, have no effect at all (see, e.g., Sathiakumar et al., 2004).

More recent studies look for a link between diabetes risk and pesticide exposure. Exposure to organochlorine compounds is associated with increased prevalence of diabetes (Cox et al., 2007) as well as handling organophosphate insecticides (Montgomery et al., 2008). All the studies in this section find a significant association between pesticide exposure and diabetes, but the number of studies (3) is not large enough to formulate a general conclusion.

2Weichenthal et al. (2010) reviews in a simplified way the epidemiologic evidence related to occupational pesticide exposures and cancer incidence in the AHS cohort. Some of these studies were not included in our review since they were published in journals not considered by our search tool. 3 Farmer's lung is a hypersensitivity pneumonitis induced by the inhalation of biologic dusts coming from hay dust or mold spores or other agricultural products.

There were 5 studies in which the authors analyze the relationship between pesticide exposure and women specific disorders. Regarding the age at menopause the results are mixed: Farr et al. (2006) finds that exposure is associated with a higher age at women's menopause, while Akkina et al. (2004) reports the opposite result. The rest of the studies find that pesticide exposure is cause of hormonal disorders (see e.g., Farr et al., 2004), but it has no effect on delayed conception on pregnant women (Lauria et al., 2006).

2.1.6 General health, multiple diseases, and others

In this section we included studies that analyze the impact of pesticide exposure on general health or on several diseases (33 studies in total). There are studies of diseases such as hepatitis, dyspnea (Azmi et al., 2006), hearing loss (Crawford et al., 2008), myocardial infarction (Dayton et al., 2010), thyroid disease (Goldner et al., 2010), sperm quality (see, e.g., Perry et al. 2011), and of general measures such as human health hazard levels (Murphy et al., 1999) and even suicides (Beard et al., 2011). Some studies highlight that precautionary measures have a significant impact on the relationship between pesticides and disease (Sekiyama et al., 2007), while others find significant interaction effects on health of pesticide exposure and genetic polymorphisms (see, e.g., Lacasaña et al. 2010b). New studies include clever techniques to analyze the effects of pesticides, such as invitro tests (Orton et al., 2011), that enhance the identification of pesticides' effects.

There were 64 studies (33.5% of the total) analyzing the impact of pesticides on the health of people with indirect exposure. The subjects of these studies include farmers' family members or people living in rural areas where there is an intensive use of pesticides. The main features of these studies are summarized in Table 2 in the appendix.

We found 16 studies on cancer risk and indirect pesticides exposure among which no unanimous consensus is reached. For example, while 5 studies find evidence associating pesticide exposure (environmental, or prenatal) with increased risk of childhood leukemia (see, e.g., Ferreira et al. (2013)), Pearce et al. (2006) reports no significant association. In total, there are 3 studies whose evidence suggest no significant association between increased risk of cancer and indirect pesticide exposure (see, e.g., Carreon et al. (2005)), while the rest conclude the opposite, at least for some specific pesticides.

4 These laboratory methods allow the researcher to recreate the exposure of specific cells to pesticides, isolating the pure-pesticide effect.

Only 2 studies were found looking at increased risk of diabetes, and both conclude that pesticide exposure can be associated to an increased risk of diabetes (Everett et al., (2010), Son et al. (2010)). The number of related studies is too small to end up with a general conclusion, but this should motivate more research regarding this type of risk.

It was surprising to find only 1 study looking at the risk of respiratory diseases (Balluz et al. (2000)). This study suggests that the health complaints reported by employees at a health center whose first floor was used as a mixing area for pesticides 20 years before, were precipitated by environmental and psychological factors, more than actual exposure to pesticides. More evidence is needed to come up with a general conclusion.

2.2.5 General health, multiple diseases, and others

Although we expected to have more studies in this section, only 5 studies were found (2.6% of the total) and most of them related to cancer risk. Main results are presented in Table 3 in the appendix.

The studies on cancer analyze the risks associated with the consumption of specific products which have some pesticide residues. These consumption products include: fish (Li et al., 2008), water (Buczynska and Szadkowska, 2005), seafood (Moon et al., 2009), and milk or other dairy products (Pandit and Sahu, 2002). In general these studies find a small but statistically significant association between cancer risks and some specific pesticide residues, such as DDT and DDD (dichlorodiphenyldichloroethane), but not for other organochlorines. Specifically PCBs (polychlorinated biphenyls) present a higher risk for consumers (see e.g., Li et al., 2008).

2.3.2 General health, multiple diseases, and others

Only 1 study was found analyzing pesticide residue concentration in vegetables and finds that the risk posed to consumers varies with the season (Bhanti et al., 2007). The winter season has the highest pesticide concentrations in vegetables that might accumulate in the person's body and lead to fatal consequences in the long run. However, only methyl parathion residues have a significant hazard index, so this result is also pesticide-dependent.

Most of the studies found in our literature review are related to the health effects of people with direct exposure (63.9%). Research on people with indirect exposure is harder to find, while research on the risk of pesticide residues for consumers has not been part of the agenda. Therefore, more research is needed to analyze the potential health effects of pesticides on these subjects.

Regarding data availability, the AHS is the main database used in a large number of the studies in more than 40% for direct exposure and almost 20% for indirect exposure). More studies collecting data should be conducted to validate the results since the AHS might be influenced by geographical conditions (only two states are represented: lowa and North Carolina). Moreover, in the AHS the enrollment process was voluntary and the first approach was made during the training to obtain a license to apply pesticides so selection bias is one concern. Nevertheless, this study compares favorably with enrollment rates of previous prospective studies, so more initiatives like this should be considered to improve research in this field.

Previous literature surveys (published before 2000) have analyzed only the hazard effects of direct exposure. Do Pico (1992) provides similar conclusions to those we find regarding respiratory diseases: hazardous exposures (including pesticides) can develop into respiratory disorders such as asthma, bronchitis, solo filler's disease, and neuromuscular respiratory failure. Eyer (1995) finds that exposure to high doses of organophosphates with clinically significant intoxications can affect behavior, as well as mental and visual functions, whereas asymptomatic exposure is not connected to neuropsychopathological disorders. These results are similar to what can be concluded from our review: results are pesticide-specific and sometimes depend on the length of the exposure period.

Moreover, Blair et al. (1995) suggests an association between pesticide exposure and cancer. Our review provides stronger conclusions due to new findings on some pesticides increasing the risk of cancer (such as metolachlor and diazinon on lung cancer). The review by Dich et al. (1997) on cancer risk links phenoxy herbicides with soft tissue sarcoma (STS), organochlorine insecticides with STS, non-Hodgkin's lymphoma (NHL), leukemia and lung and breast cancer; organophosphorous are linked with NHL and leukemia; and triazine herbicides with ovarian cancer. This review highlights that "few, if any, of these associations can be considered established and causal” which is a concern that can be extended to many of the studies included in our review.

Arbuckle et al. (1998) suggests an increased risk of fetal deaths associated with pesticides and maternal employment in the agricultural industry. Similarly to one of the studies on pesticide exposure during early pregnancy found in our review (Sathyanarayana et al., 2010), the authors face problems because of the lack of data and methodological issues.

We consider the results of this review consistent with previous ones. The links between health risks and pesticide exposure are pesticide-dependent, there is a lack of data in order to obtain more reliable results, and there still exist some methodological issues that could be improved to deal with low number of cases, and potential regional effects or biases.

A Survey On the Health Effects of Pesticides. (2021, Oct 31). Retrieved from http://envrexperts.com/free-essays/essay-about-survey-health-effects-pesticides 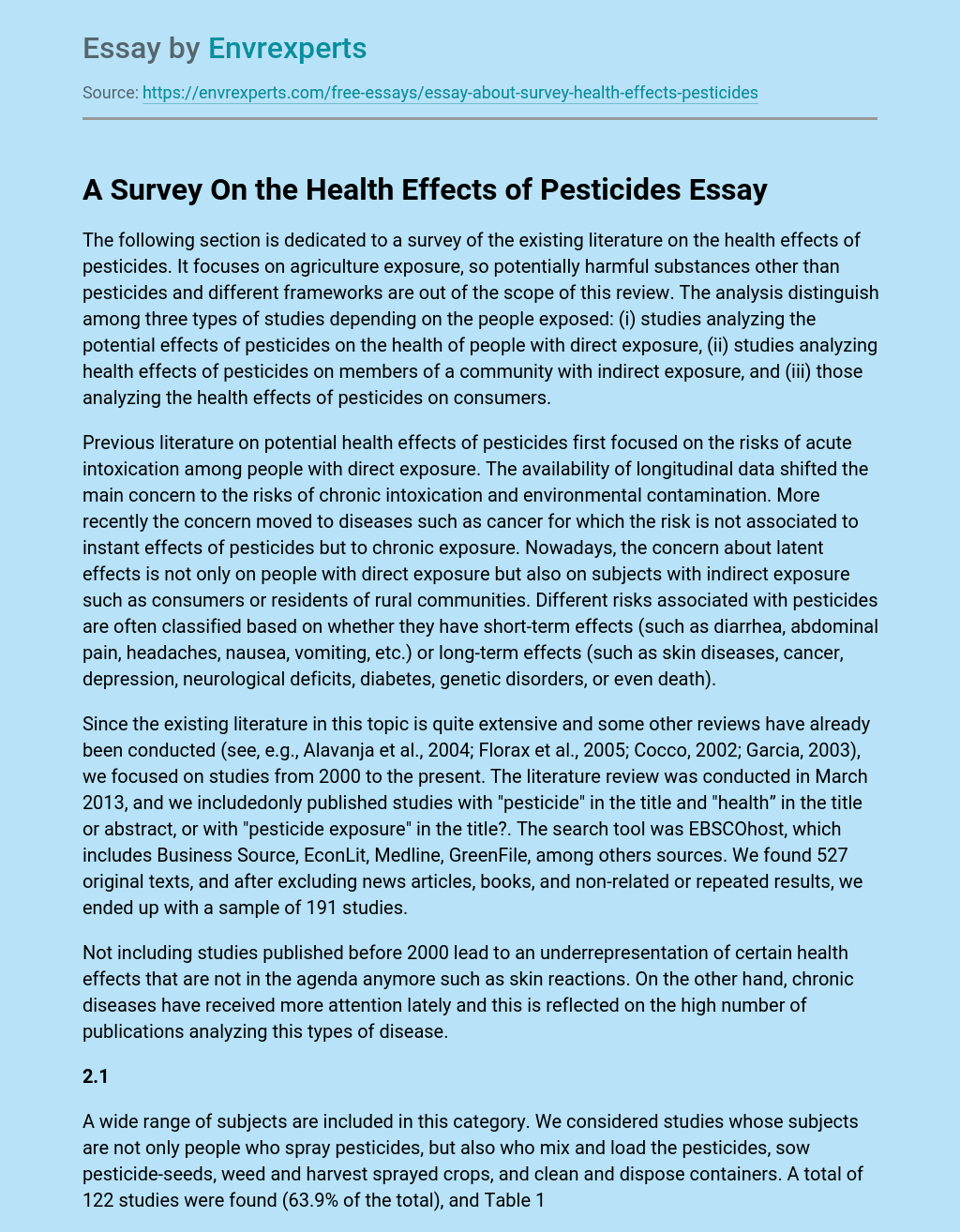