In its fundamental form currency (in the form of banknote or coin) is a promise to the bearer by the central bank. It serves as a store of value and as a medium of exchange besides as a unit of account. As a store of value money must not lose its value between two transactions carried within reasonable time frame. Central banks across the countries have objective to maintain the internal value of their currency. Confidence in central bank money rests on the ability of its issuer to maintain the value of the stock of currency as a whole.

Don’t waste time
Get a verified writer to help you with Sustainability of Current Bank Business
Hire writer
$35.80 for a 2-page paper

This is at the core of any central bank’s mandate and it is enhanced by its degree of independence. However, rapid digitization of society, emergence of efficient cross border payment systems (such as PayPal) and rise of crypto currencies are challenging traditional pillars of central bank and fiat money.

This has prompted several central banks to not just explore digital currencies but to retain their role/monopoly.

According to Bank for International Settlements (BIS), Central Bank Digital Currency (CBDC) is not a well-defined term. The CPMI-MC Report (2018) has described it as, “… a central bank liability, denominated in an existing unit of account, which serves both as a medium of exchange and a store of value” . Expanding the scope of CBDC the Bank of England described it as, “…an electronic form of central bank money that could be used by households and businesses to make payments and store value.

This wider access to central bank money could create new opportunities for payments and the way the Bank maintains monetary and financial stability” . The exploratory push for CBDCs across the central banks has diverse set of reasons.

This can enable payments and transfers to take place directly in risk-free central bank money, and in real time to businesses and individuals. There could also be benefits of having a CBDC for wholesale and interbank payments; for example, it could facilitate faster settlement and extended settlement hours. Implementation of CBDC through existing structure of commercial banks and payment service providers (PSP) would require considerable investments to set up a suitable infrastructure, redesign network and integrate it with current existing technologies. Impact on Financial Intermediation: Introduction of CBDC will have wide scale implications on traditional structure of banking business and financial intermediation model. Households and firms will have a choice to decide between banking deposits or digital money holdings at central bank.

Commercial bank deposits may face stiff competition from CBDCs as potential group of people and firms will prefer moving existing deposits to CBDCs. It could result into reducing the need of state guarantees to the bank liabilities. Furthermore, due to the strong competition on retail transactional services, banks and other financial entities would be pushed to increasingly rely on wholesale or even overseas funding which is likely to be expensive and more unstable. This would constitute a large structural change for the banking sector which could see their intermediation margins eroded and have consequences for credit provision, thereby posing a significant challenge to the sustainability of current bank business models.

Impact on Monetary Policy: According to BIS CPMI-MC Report (2018) the CBDC does not alter the basic mechanics of monetary policy implementation. CBDC as a digital alternative would be helpful in passing over any changes in the Bank Rate faster to the households and firms. Having a CBDC thus, make more systematic and transparent monetary policy actions, thereby facilitating the effectiveness of transmission mechanisms and at the same time granting the central bank greater control over the general financial conditions in the economy and, therefore, over aggregate demand. But these benefits would have to be weighed against risks, such as the potential effects of disintermediation of the banking sector on credit provision. 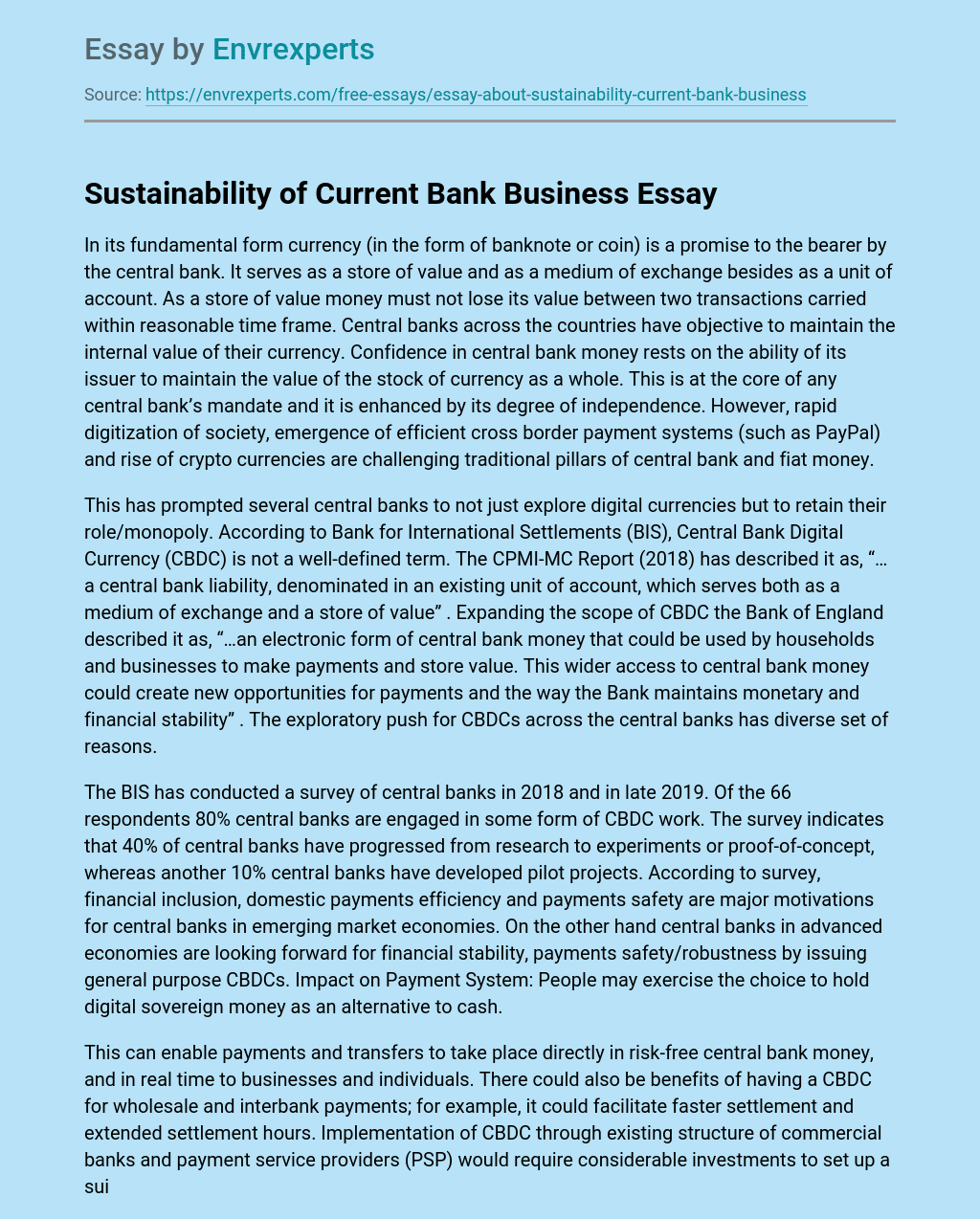