Sustainability of Detroit City in Michigan

Don’t waste time
Get a verified writer to help you with Sustainability of Detroit City in Michigan
Hire writer
$35.80 for a 2-page paper

The city of Detroit has a strong Mayor –Council system. The current mayor is Mike Duggan, who was first elected in 2013, re-elected in 2017, and has worked for the city for his entire career (5). The legislative body of Detroit is the Detroit City Council, which contains nine members.
Detroit\'s top three sustainability challenges include health, air quality, and a lack of economic opportunities. Detroit has 55 facilities that are required to get permission from the state prior to operation due to their excess of emissions and 2 of them are “high priority violators\'\' (3).

Exposure to these emissions affect respiratory, cardiovascular, and neurological health, which increase Detroit\'s already high asthma, cancer, and heart disease rates (3). To address this, Detroit has a sustainability goal to “increase access to healthy food, green spaces, and recreation opportunities” (5). For the community to thrive, the city has focused resources on growing parks, putting healthier food in more stores, and obtaining nourishing local food for city programs. This enables Detroiters to live a healthier lifestyle and empowers their community.

Next, like many other cities suffering from air pollution, Detroit’s air is polluted by everyday human actions like burning fuels, running industrial factories, and driving cars. To address this, Detroit has made a goal to “improve air quality and reduce exposure to pollution” (5). Detroit ranked number 26 in 2019 for the worst air pollution and number 2 for worst heart health in America ( 7 and 8). In order for Detroiters to live a healthier lifestyle, the air they breathe needs to be clean. Detroit plans to reduce and monitor city vehicle emissions and ensure residents are taking the quickest routes possible (5). They also plan to increase the monitoring of air quality so they can plant trees in susceptible areas and be more successful with mitigating air pollution (5). Last but not least is economic opportunity. If the city wants its people to fully thrive, more opportunities for economic growth are essential. The US unemployment rate is 3.9% while Detroit’s sits at an alarming 8.9% (9). Not all Detroiters have access to opportunities. To improve job access the city plans to implement training programs that will connect the community career opportunities (5). They will be expanding and providing training for the green jobs workforce as well (5). This will prepare Detroiters for new careers that are being opened up by the city.
Sydney is the largest city in Australia and is located in the state of New South Wales. It is home to approximately 5,230,330 people and spans about 4,689 square miles (2). The median age of Sydney\'s population is 36 years old, 8.1% of the population are between the ages of 30 and 34 which is the largest age group in Sydney (13). The average household income in Sydney is $1,750, personal income is $719, and weekly rent cost is $440 (13). The residents of Sydney come from several different backgrounds. The most common migrant languages spoken in Sydney are English, Arabic, Mandarin, Cantonese, Vietnamese, and Greek. Around 32.5% of the population speaks a language other than English at home (10). The local governments of Australia are in the form of a shire or a city/town council. There are 9 councillors and a Lord Mayor who are elected to represent the welfare of the public. The Lord Mayor\'s roles include hosting ceremonial events, representing the community and Council views, and at Council meetings they lead the decision making. The current Lord Mayor is Clover Moore. She is also the longest serving Lord Mayor of Sydney and also performs functions of a councillor.
The major sustainability issues affecting Sydney are water sensitivity, climate change, and waste.Water is vital for the survival of any city. The average population growth rate for Sydney is 4.52% while Australia’s average growth rate is 3.43% (10). The city will be using water fittings and fixtures to use less water to become a water sensitive city to be more green and resilient. They will also collect and recycle waste water for non-potable and potable uses (6). Sydney treats the collected water to an extremely high standard so it\'s safe for consumption and discharges recycled wastewater into a nearby river or used for drinking water in northwestern Sydney (12). Sydney plans to reduce stormwater contamination by decreasing the pollution in local waterways and increasing green to help urban cooling (6). Sydney also struggles with extreme heat and flooding due to climate change. Due to the urban heat island effect, Sydney’s climate has become steadily warmer throughout the years. It is predicted that the city will be three times more susceptible to heatwaves by 2070 and twice as likely for flash floods or extreme storms (6). The hottest days of Sydney are yet to come and the impacts will affect health, air pollution, infrastructure and energy use. Since 2005 the city has planted 11,017 trees and since 2008 has input 57,752 square meters of landscape to mitigate the effects of flooding and extreme heat (6). They have also invested in stormwater management to reduce flooding and are developing a heatwave response plan (6). Lastly, the city is responsible for collecting 75,000 tons of waste annually (6). By the year 2030, that amount is expected to grow to 80,000 tons annually (6). Dumping the waste in landfills causes environmental impacts such as methane emission which is a greenhouse gas which generates 5% of total emissions (6). There being limited landfill capacity they are making advances to recycle more but their rising population also comes with a rise in waste. To improve this, they are making separate recycling bins for paper, cardboard, plastic, and printer cartridges and composting green waste from parks and reusing it on site. Lastly, they send demolition and construction waste to the city to be managed and divided into reprocessing, recovery, and reuse.
Overall, from a sustainability perspective, both cities are making great efforts for improvement. Detroit has created 10 goals for making the city more sustainable and multiple plans of action to go along with each goal. The city has also created a sustainability framework with healthy, thriving people at the center, affordable quality homes, clean, connected neighbors, equitable, and a green city. However, Sydney has done a better job of putting programs and policies in place and executing plans like their recycling, resource, and recovery system. They have concrete goals to decrease water use and greenhouse gas emissions. They\'re also working towards a sustainable future regarding the city’s resource, energy, and water use. The city was the first in Australia to be carbon neutral (6). Sydney has also planted thousands of trees, using alternative water, and creating energy efficient master plans. While Detroit has its 10 goals towards a sustainable city, Sydney has been more successful in implementation.

Sustainability of Detroit City in Michigan. (2021, Oct 31). Retrieved from http://envrexperts.com/free-essays/essay-about-sustainability-detroit-city-michigan 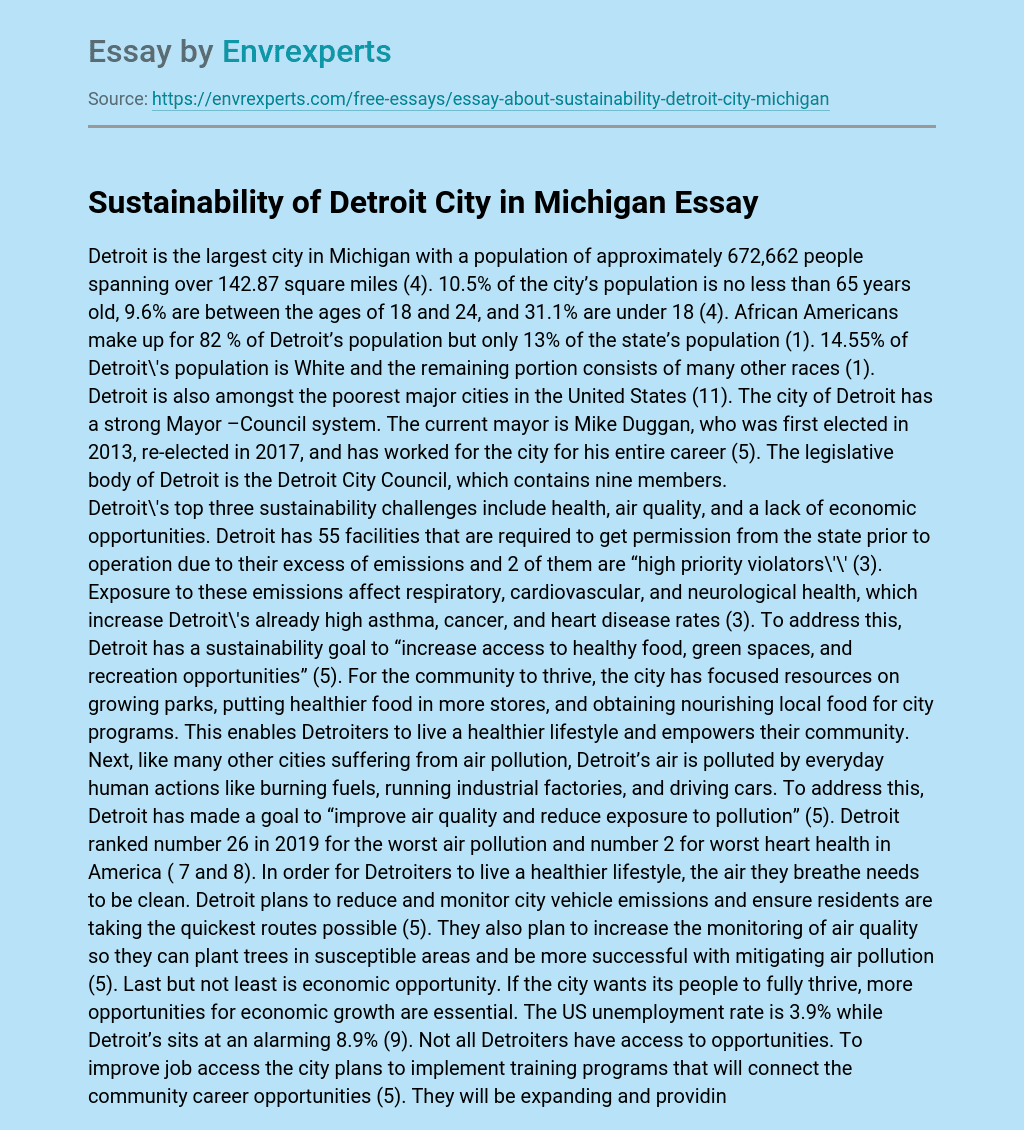