Systems of Government in Sweden

Sweden has an open market economy making it a capitalist country. People own their own businesses and properties. The tax in Sweden pays for education, health care, and child care. The wealth in Sweden is created by large and private businesses. They export engines, and other machines, motor vehicles, telecommunications equipment, etc. Agricultural products in Sweden consist of barley, wheat, sugar, beets, etc. In the north of Sweden hay and potatoes are the main crops. The unemployment rate in Sweden is 6.

Don’t waste time
Get a verified writer to help you with Systems of Government in Sweden
Hire writer
$35.80 for a 2-page paper

The Swedish government is based on a parliamentary and monarchy system. The constitutional monarchy in Sweden is based on 4 fundamental laws. The 4 fundamental laws are the Instrument Government, the Act of Succession, the Freedom of the Press Act, and Fundamental Law on Freedom of Expression. The instrument of Government describes how Sweden is governed and set up. This contains rules on how the government should operate and how elections of the Riksdag is taking place.

The Act of Succession deals with who may become a ruler in Sweden. The Freedom of the Press Act explains what is allowed to be written in newspapers and books. The Fundamental Law on Freedom of Expression deals with can be said on the media, tv, films, etc. The executive power is led by the Prime Minister of Sweden. Legislative power is invested by both the government and parliament which is elected within a multiparty system. Sweden is also included in the European Union.

Sweden was the first country to introduce constitutional law and which they abolish censorship in 1766.

Sweden is a Parliamentary Democracy. The citizens of Sweden vote every 4 years on the second Sunday of September for who will represent them in the Swedish Parliament. Anyone who is a resident of Sweden and 18 or over can vote or have the opportunity to serve in the Swedish Parliament. A party must receive at least 4% of votes to be represented in parliament. The Parliament branch made up of 349 members that make decisions that the government can follow through. When any proposals for new laws or amendments it goes to the parliament for approval.

Sweden’s environment is made up of a lot of lakes in rural areas. There are over 100,000 lakes, in which over a small amount of the countryside in Sweden is covered by lakes. Sweden is facing a major environment because of the pollution of the Baltic Sea. This pollution is caused by pollutants from waste materials from facilities. Sweden is responsible for the number of chemicals dumped into the Baltic Sea in 2010. The effect of this causes fish to not be able to breed in lakes around Sweden. Even though Sweden has environmental issues, Sweden has been making progress in its environment. This is making Sweden one of the progressive to solve their environmental issues. Sweden has created a new government agency to help maintain pollution issues in their slakes. In Sweden, people are good at recycling. They are so good at this that they have a 99% recycling rate and they are importing about 2.3 million tons of waste from other countries.

China has been attacking Sweden Media which includes visa bands and threats. There were complaints that a journalist has been put under pressure by Chinese government representatives. This is not a surprise to the Sweeden government because China’s ambassador Gui Congyou has tried to overthrow the freedom of the press and expression under the Swedish constitution many times. Sweden journalists had been denied visas and editors received threats. This problem between Sweden and have been going on since 2015. When Chinese agents seized a Chinese publisher, Gui Minhai a Swedish citizen while he was on vacation. The conflict between China and Sweden doesn’t only affect Sweden but also for all democratic countries.

Systems of Government in Sweden. (2021, Oct 31). Retrieved from http://envrexperts.com/free-essays/essay-about-systems-government-sweden 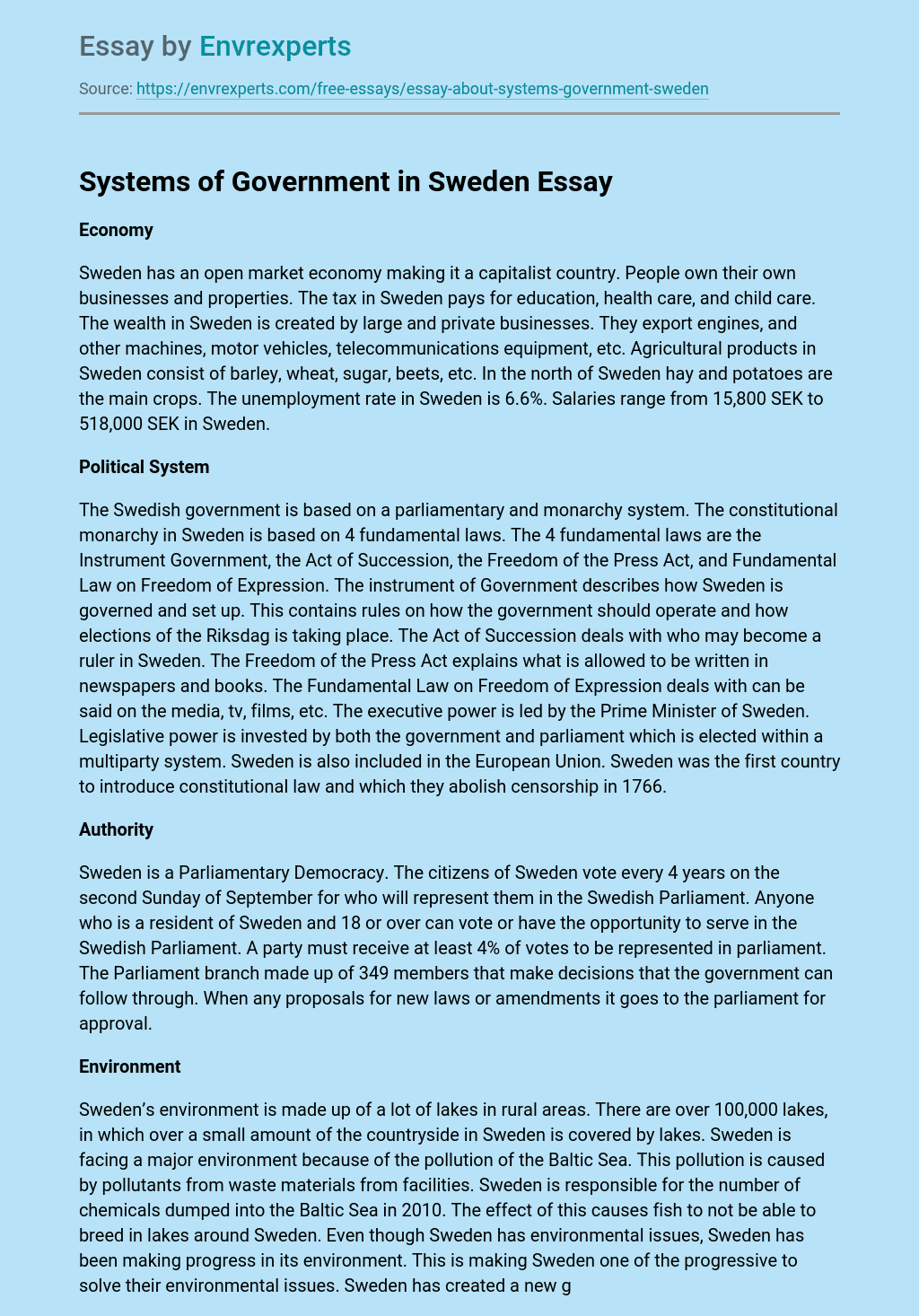