Television and the Issues of Pollution in the Water

Have you ever turned on the television and saw an oil spill or gotten really excited to go to the beach only to see contamination signs everywhere? Pollution may be destroying the ocean before the ocean's resources will fully be used. For years, all kinds of garbage and toxic waste have been disposed into the ocean, thinking that the ocean is large enough to absorb it and not be affected by it. But now the widespread effects are known. The government needs to spend some taxpayer money on helping the conditions of these beaches because in time there will not be that many more beaches.

Don’t waste time
Get a verified writer to help you with Television and the Issues of Pollution in the Water
Hire writer
$35.80 for a 2-page paper

Pollution in the water is a very harmful tradition that people continue to do because it is putting a lot of sea life creatures in danger of being killed. Extinction is far too common these days for a lot of animals. Today, we have about half of the animals we did a long time ago.

A big reason is due to pollution. These animals homes are taken away because of the trash content everywhere. It is not fair to these animals whose food and shelter always gets contaminated. When these animals get killed, it breaks a part of the food chain. If an animal is taken out of the chain, the other animals that eat that one will go hungry, therefore killing them off too. Contaminated food has already happened to the food humans eat. For example, the Mad Cow Disease. This disease slowed the beef market down and it is easily happening in the other ocean creatures market.

Humans have no right to kill what is not theirs, unless it is for food purpose only. Most humans do not realize that polluting the ocean kills animals, but the truth is, it does.

Not only are animals at a risk, humans are too because of the unstable cliffs along the coastline. These cliffs are very unsturdy and have already claimed the life of one woman who was sitting below. These cliffs have been falling for years, but only recently presented a severe risk. The woman was killed because of the negligence of the cliffs. No one seemed to think anything that bad was capable of happening. Taxpayers homes are also threatened along this coastline. They pay their taxes and now they need to be protected by these aging and eroding cliffs that are susceptible to falling. Erosion is not the only reason for these cliffs falling; bacteria and waste have a part in it too.

Pollution has the ability to take its toll on air, which affects the beaches. Whenever trash is burned or dumped out into the ocean, it depletes the ozone. The ozone is the protective layer around the Earth and without it all mankind will die. It protects us from the suns UV rays so when Styrofoam or other bad chemicals are burned, the ozone is just slowly disappearing. Bacteria levels will raise if human waste and garbage are continuously dumped into the ocean. That is why so many beaches are always contaminated. Imperial Beach in San Diego is constantly closed due to the waste run off from the Tijuana River. Not only is this gross, but it is harmful to all living creatures. If nothing is done about this pollution the air and water that is used will not be able to be used anymore.

The government is spending tax dollars for unnecessary things when they need to be spending them on something that can alter the way Earth is. The Environmental Protection Agency says that that the government is a Big water polluter, violating the Clean Water Act. The government made their mess now the need to be the ones to clean it up. The government needs to pay for its penalties just like anyone else. They control the taxpayers money so why not spend some on their own mistake. All to often tax money is spent on fixing roads that do not need to be fixed or helping to build a ballpark. This is just a waste of money when there is too many more important things that need to be fixed in the country. As one of the strongest countries in this world, the U.S. needs to set an example to all other countries and how to keep the water clean. The government has the money and power to regulate this issue so they need to take the initiative to do something about it. If everyone helped out in some way, especially the government, the problem of pollution will be solved.

Television and the Issues of Pollution in the Water. (2021, Oct 31). Retrieved from http://envrexperts.com/free-essays/essay-about-television-and-issues-pollution-water 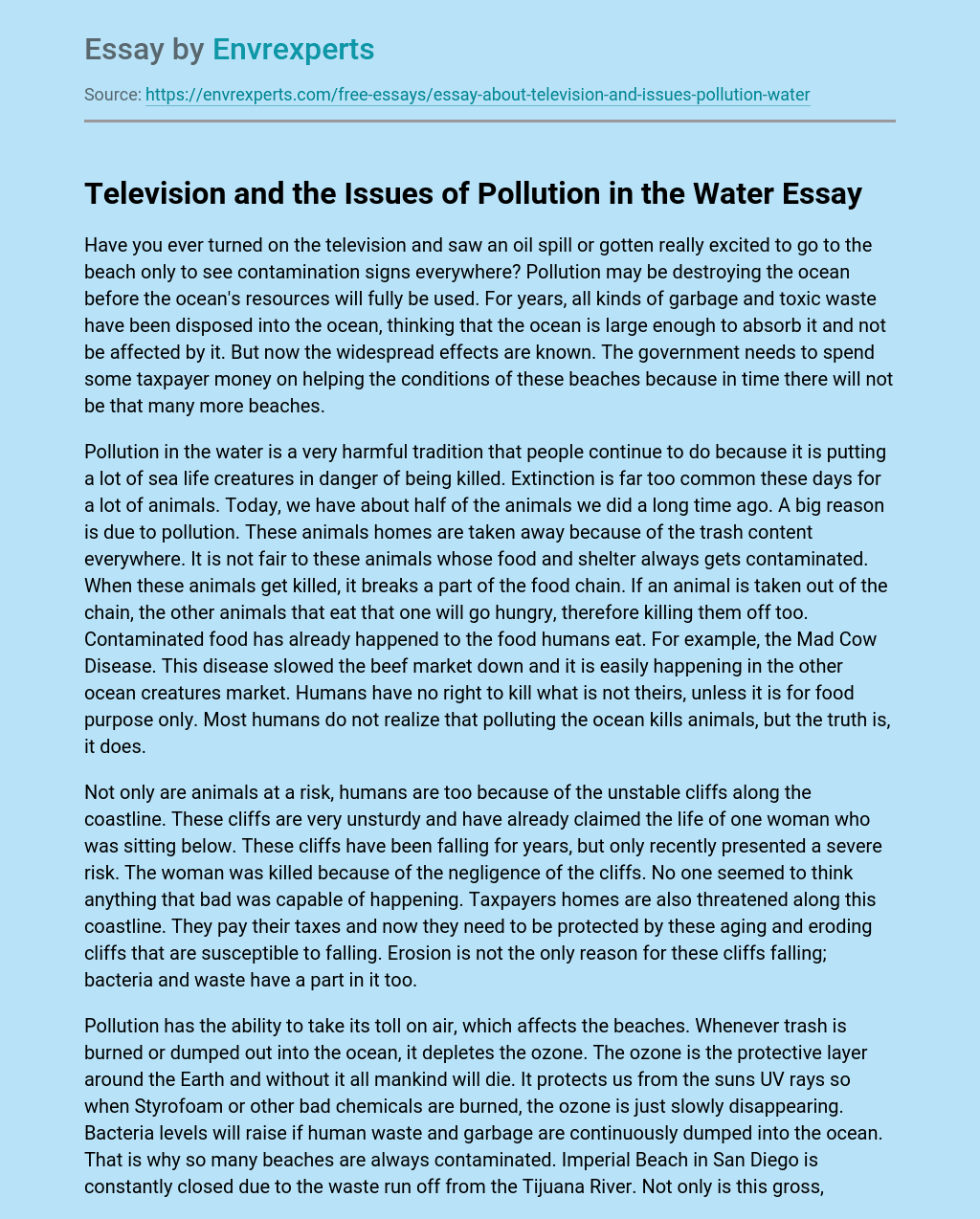