The City of Chicago’s Dilemma with Single-Use Plastics

In the city of Chicago, foam to-go boxes could be banned, and single-use plastics could be restricted at Chicago restaurants under a municipal ordinance proposed aimed at reducing plastic pollution. The “Plastic-Free Water” ordinance introduced by Mayor Lori Lightfoot’s Finance Committee Chairman, Scott Waguespack, would give restaurants carryouts and to-go orders until Jan. 1, 2021, to stop serving food in the polystyrene containers commonly used by small neighborhood restaurants. Instead, restaurants must use reusable dishes for dine-in orders and recyclable or compostable containers for to-go orders.

Don’t waste time
Get a verified writer to help you with The City of Chicago’s Dilemma with Single-Use Plastics
Hire writer
$35.80 for a 2-page paper

Restaurants that are not able to wash dishes or contract that workload can request a full or partial waiver under the ordinance. Additionally, restaurants would have to cut back on disposable food ware items, like plastic eating utensils, by providing items only by request or at a self-service station. Plastic drinking straws will also be available when specifically requested.
Customers would also be allowed to bring their reusable cups when dining. Restaurants could offer reusable cups for dining-in and disposable cups with lids, spill plugs, or sleeves for delivery or take-out service.

Jen Walling, president of the Illinois Environmental Council, hailed the proposed ordinance as the “strongest ordinance in the Midwest” and a “mirror” of some of the strongest ordinances in the country. “We want to target these single-use plastics and foam products because we use them for a brief amount of time. Nevertheless, they exist in our environment and our community for centuries,” said Abe Scarr, State Director of Illinois PIRG, one of the organizations that worked on the proposal.

After the plan was introduced, the Illinois Restaurant Association said it is supportive of voluntary efforts to reduce waste, but warned of potential cost impacts on businesses. “Restaurants face massive legislative and regulatory burdens – such as a higher minimum wage, paid sick leave, and Fair Workweek rules – that result in average profit margins that are already pennies on the dollar,” IRA President and CEO Sam Toia said in a statement. “Any proposed regulations on plastics need to consider the additional financial hardships that will be placed on operators and implications for safety and sanitation, customer requests, drive-through areas, medical necessity of plastic food-ware, and other considerations.”
“Twenty-two million pounds of plastics are going into the Great Lakes every single year,” he said. “We are finding plastic particles in the water we drink and the food we eat. We cannot recycle our way out of the problem.”

The production of plastic worldwide has outpaced that of almost any other material. As it stands, plastic packaging accounts for about half of the plastic waste in the world. Globally, Asia, America, and the European Union are the world’s leaders in producing plastic packaging waste per capita. The plastics used by everyday Chicagoans are thrown out almost immediately after being used only once. Thus, the ability to manage the high volume of plastic waste is confounded. Most plastics end up in dumps, landfills, or the environment — jeopardizing our drinking supply. If current trends continue and waste management policies fail to be adopted, then by 2050, there will be roughly 12 billion tons of plastic waste in the environment and landfills.
Plastics take a very long time to biodegrade and go through a lengthy process to breakdown into fragments known as micro-plastics. Plastic bags and single-use plastics made of expanded polystyrene, take thousands of years to decompose and are harmful to the soil and water supply. In Asia, plastic litter costs the fishing, tourism, and shipping industries over one billion per year. In Europe, the costs of cleaning up waste from the coast are roughly $630 million per year. Thus, the total global economic damage to the marine ecosystems alone is $13 billion. The economic war waged by plastics alone is reason to act.
Changing consumption patterns, growing populations, and increased urbanization are some of the significant challenges developing countries face concerning waste management. Waste plastic is highly problematic one, with single-use plastic leaking into the environment at an unprecedented rate. Around the world, countries are taking action to minimize these impacts, including banning single-use plastics, changing petroleum-based plastics to alternative bio-benign products such as paper, glass or biodegradable plastics, and improving waste collection systems to ensure that all waste is appropriately collected and reprocessed or safely disposed. However, these “solutions” are met with resistance, from business, government, and citizens, due to the intended and unintended consequences, leaving many questioning the most appropriate solution to reducing the leakage. There is no single solution to addressing the leakage of plastic into the environment. Based on local considerations, the answer is likely to be a combination of the three approaches.
Considering the city of Chicago’s 2021 approach towards businesses, these sorts of articles reinforce the narrative that reactions to environmentalism are too slow, and further steps need to be taken. Developing countries naturally have more challenges than the United States, yet still, comprise our global ecosystem in a broader lens. As I mentioned in my earlier sources, making the connection from Chicago to the outside world might be unnecessary, I may want to focus primarily on the United States. However, alternative understanding perspectives can still strengthen any conclusions I make too.
Measures to reduce plastic bag pollution have included bans and levies. These interventions have occurred both regionally and nationally. Although reduction strategies provide tools to reduce single-use plastics at source, it is recommended that consistent measures continue to be implemented to mitigate plastic bags and micro-beads pollution. However, it is equally essential that research measure the positive impacts of these strategies in the short- and long-term. Education campaigns will likely help to reduce further plastic pollution caused by micro-beads and plastic bags at the source. The city of Chicago has seen measures taken towards environmentalism in the past, concepts that are not new to citizens; however, where public resentment will stem from is the “hurt” such policies put on businesses.

The Potential Impact on Businesses in the City of Chicago

Plastic-pollution is, regardless, deserving of our attention. However, does a ban on single-use products grant a significant first step towards a cleaner environment? The answer is, no. The contribution of the UK – and the EU and US to global plastic pollution, is marginal when comparing countries such as China, Indonesia, and the Philippines dumping enormous amounts of plastic compared to more industrialized nations. Western bans on single-use plastics can only ever be little more than superficial, a bandaid on a much larger macro issue.
Furthermore, for green alternatives to achieve their intended objective, infrastructure needs to facilitate recycling. As businesses adopt compostable, recyclable, and reusable methods, there needs to be equal measures taken by consumers and their governments. Without readily available recycling bins, the problem of littering still exists, and the turn to \"green products\" such as bamboo, metal, or paper, is irrelevant if public infrastructures cannot accommodate the change.
We should also be careful not to forget that while certain “green” products might not be as pollutive when discarded, some require more fossil fuels to produce than their plastic alternative. According to Fortune magazine, “manufacturing a disposable paper cup requires at least 20% more fossil fuel and almost 50% more electricity than a styrofoam cup does.” It is, therefore, rather apparent that a ban on single-use plastics is unlikely to have any real impact on the global pollution issue. While switching from plastic to paper might not get a second glance from many of us, to others, this is a change that represents a great deal of new expenditure for businesses that have to pay for a more expensive alternative. As an example, after the city of Seattle banned single-use plastic shopping bags, many store-owners saw their cost for bags increase from 40% up to 200%. As a result of plastic bans like this, such businesses are often forced to make changes to account for the extra cost, either through reducing expenditure in other areas or by raising the cost of their products. Thus, it is likely that any ban on single-use plastics will prove costly to producers and consumers alike, all the while producing negligible results when it comes to reducing pollution.
Ultimately, the ban on single-use plastics will place a significant burden on both consumers and producers and will have little to show for it. This is a shame, since far more effective solutions exist that would be far less damaging to consumer choice and accessibility. One possible path to take would be to improve the recycling infrastructure. Plastic waste has been exported overseas to countries like China to be recycled since the city of Chicago lacks the plants and infrastructure to do it locally. As a result, the city of Chicago should strongly consider improving its infrastructure, providing an opportunity to reduce our contribution to plastic pollution considerably, and creating new jobs locally. While a ban on single-use products will burden consumers for little result, better recycling possibilities offer a far more efficient route to reduced waste.\nLegislative History of Environmentalism and Single-Use Plastics
China has taken efforts to reduce plastic consumption by eliminating the one trillion plastic bags used each year, African and Asian countries have set minimum thickness thresholds after plastic bags were found to clog pipes and waterways, and Europe has chosen to financially disincentivize their use by placing a tax on plastic bags. In the United States, progress has been slow, with action only taken by progressive cities on the West Coast, Portland, Seattle, and San Francisco. Thus, a central goal for further legislation needs to be undertaken.
In 2015, Congress passed the \"Microbead-Free Waters Act of 2015.\" The passage of the Act revealed that Congress can pass smart environmental legislation. Proponents of future environmental legislation benefit from the Act\'s example by setting a precedent against demonizing commerce, focusing on stakeholder coalition building, and emphasizing the public health aspects of the proposed legislation.

The City of Chicago’s Dilemma with Single-Use Plastics. (2021, Oct 31). Retrieved from http://envrexperts.com/free-essays/essay-about-the-city-of-chicagos-dilemma-with-single-use-plastics 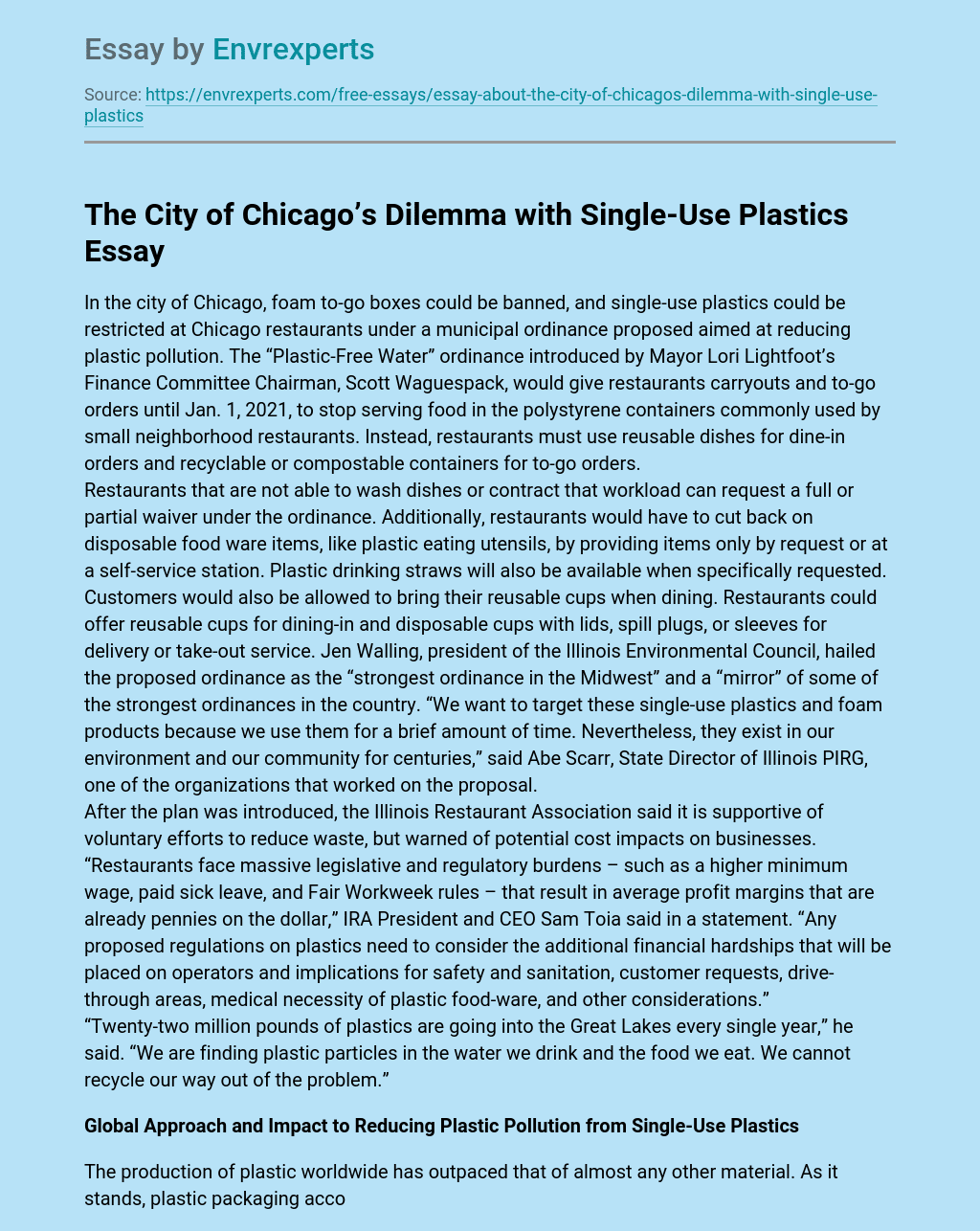