Imperialism was a time in history when industrialized nations wanted natural resources. To do so, they were planning to overcome other nations and exploit them ro build their empires. The Industrial Revolution’s technological advances made it very possible. European’s were driven by the racist view that their race is the best, that fueled them to go out and attack nations.

Other parts of their racist view was that they thought their culture and religion were better than the non-Western countries ways.

Don’t waste time
Get a verified writer to help you with The Industrial Revolution’s Technological
Hire writer
$35.80 for a 2-page paper

Africa was behind in the imperialism because of disease and lack of technology. That changed in the 1880s. Because the Maxim gun was invented, and a treatment for malaria was discovered, as well, the steam engine made transportation change a lot. In 1884-1885, 14 European nations met at the Berlin Conference, to make rules for the division of Africa.

Even though the European army were fought with fierce, armed resistance all over the African continent, there was no real success in resisting imperialist powers from the Africans.

Reason being that the technological advantages that the Europeans had were hard for the Africans to fight through. But Ethiopia, under the leadership of Menelik II, was going to maintain the country\'s independence of the opposing powers. European nations were looking to overcome the Ottoman Empire.

Russia was very interested in taking a warm water port. On the other hand, Britain and France were interested in shortening the trade routes by making a canal route in Egypt. When the oil was discovered in Persia, there was an interest in getting some from many nations.

Right after the Sepoy Rebellion, India came under the direct rule of the British. A viceroy that was governed in the name of the queen as well as the top powers in the government and military were filled with British officials. The remaining Indians took over the other jobs.Most of the policies that Britain put into place in India were made to fit India into Britain\'s overall economy. Meaning Britain invested in modernizing India, but also expected India to adopt Western culture, which was a change for them. The Chinese looked down on foreigners and the economy they used because it was more self sufficient.

They did not have much desire to trade with Europeans. So, they allowed foreigners to do business but strictly, in the southern port of Guangzhou. The balance of trade at Guangzhou was in favor of the Chinese, meaning China earned much more for its exports than it spent on imports. In order to level that trade balance, the British introduced opium. Britain refused to allow the Chinese to stop the trade of opium, a drug. and the Chinese and British went to war over it, This leading to a defeat for the Chinese, whose ships were not even close for Britain's steam powered boats. Once they had won the Opium War, the British forced open the Chinese ports to trade and extended great influence over the country.

Around the early 17th century, Japan had shut itself off with all contact with other nations. It was not until Commodore Matthew Perry in the 1850s that Japan opened up its ports. Just like in China, Japan\'s lack of a modern military meant they were forced into trade and giving their territory to European powers and the United States. Japan\'s very young emperor, Mutsuhito, realized the easiest and best way to counter Western influence was to modernize itself. So, under his rule, Japan modernized and industrialized too. And by the early 1900s, Japan won a war with China, gained territory, and then won a war against Russia. 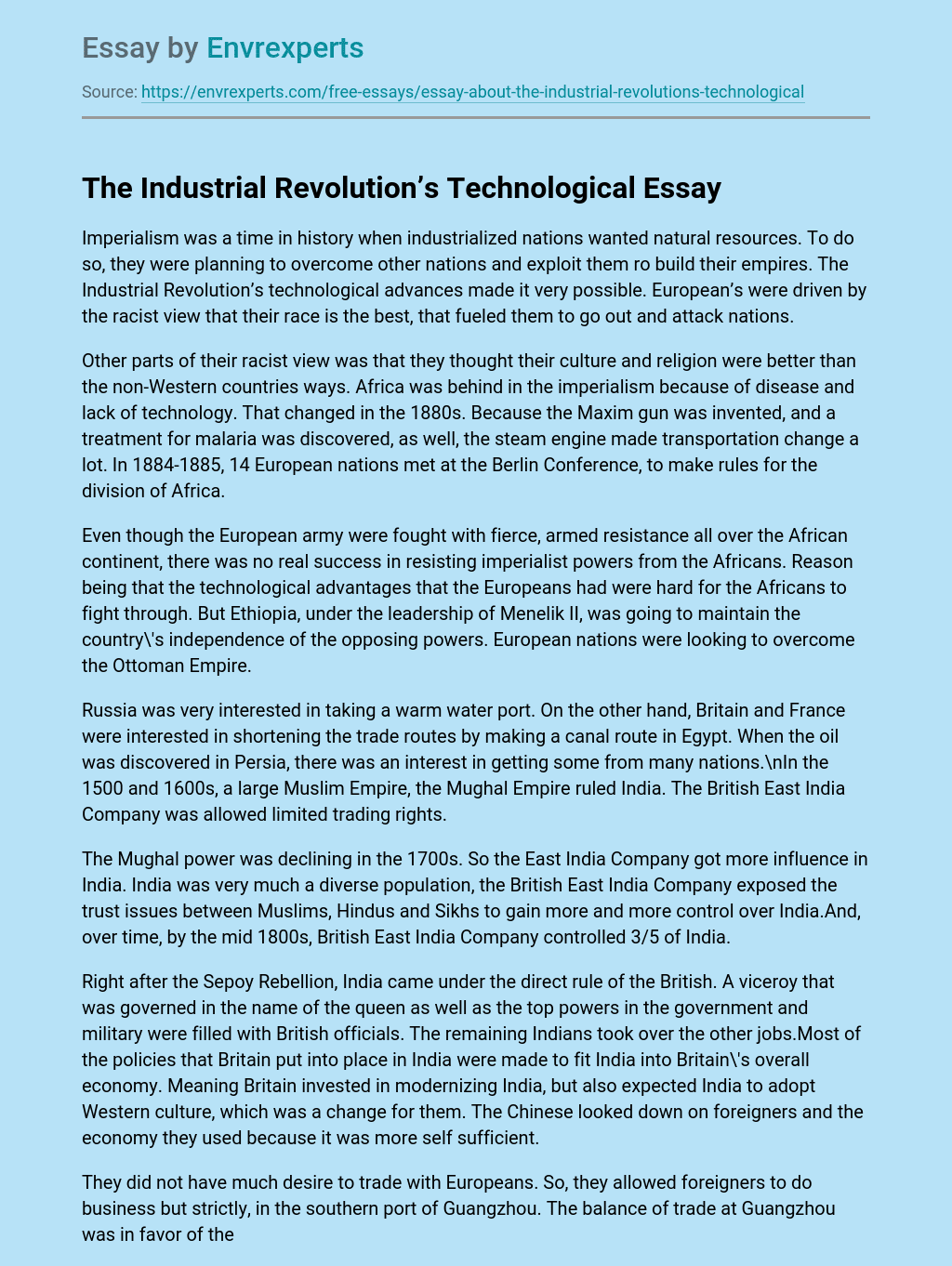