The Theme of Climate Change in 'The Swan Book'

The Swan Book is one of the novels written by the author Wright (2018), Australian indigenous among her books, the third one. Wright’s novel (2018), The Swan Book shows a set up that describes the future with Aboriginal people still surviving and greatly influenced by the intervention in the north in an ecosystem that has been tampered with by the climate change. The narrator's main point of view was to question the impacts that changes in the world would bring to the social life of people and the general climate that is the ecosystem.

Don’t waste time
Get a verified writer to help you with The Theme of Climate Change in ‘The Swan Book’
Hire writer
$35.80 for a 2-page paper

She was very categorical to question why people could remain aliens in their own countries. Wright’s novel is an example of indigenous literature that preserves the values of indigenous people (2018). The storyline follows a young desperate girl who has suffered sexual harassment and hostility of the world but still had hopes to change the state of her surroundings.

The setting of The Swan Book

Wright’s novel describes the future of indigenous people referred to as Aboriginal in Australia following various interventions that could result from modernity or any other socioeconomic factor (2018).

The story explains the state of Australia in approximately one hundred years to come. The main characters as described by Wright are settlers of an isolated swampy area that is greatly polluted by the intervening political government. The army separated Aboriginal people from the rest of Australia by constructing a fence to segregate them to swamps. Wright (2018) presents an understanding of the indigenous narrative of a certain town located centrally in the Gulf country.

The story was set during an era when the Australian government failed to acknowledge the nativity and indigenous laws.

Summary of The Book

The Swan book generally describes a woman who flew to a new country escaping the dangers posed by climate change as a result of human activities in her home country (Wright, 2018). She only realized that environmental pollution was worldwide but the rates are the differentiating factors. She came across an alienated young lady that was abused sexually and was homeless and hopeless. The Swan Book describes how indigenous people have been made alien in their homeland and segregated from white Australian. Indigenous Australian described as Aboriginal had life principles and values that took care of their culture as well as environmental conservation. Additionally, the author was also able to express the love triangles and political aspects that had an impact on the conservation of nature. There are stories within a story especially the tales about a swan that were used carefully in this novel to explain relationships between man and its surroundings.

Roles of The Main Characters in Tackling Climate Change

Wright (2018) stated that Oblivia being an indigenous person she felt that earth was where she belonged to and it was her responsibility to take care of it. Her physical appearance was compared to that of the earth and she was referred to as the face of the earth. Bella Donna in her stories was very concerned about her new habitat and she could tell stories about her previous home that people lived without taking care of the environment but themselves. She equally warned them of the dangers that accompany pollution of environment my relating how she survived the weather calamities and white swan that was lonely among other black swans. Warren played a major role by giving examples of individuals who had the right knowledge and capacity to protect the environment but they were either prevented or corrupted by political setup to take action.

Reasons for selecting the book

The Swan Book by Wright (2018) was my best choice because it explains the need to use resources sustainably and responsibly with the main agenda to protect the environment today for a better future. She explains the nature and interactions between animals, objects and humans that need to co-exist in any habit without exploitations. The author was able to drive into the mind of her writers that they should be able to accept their true identity and appreciate their indigenous personalities and moral values. Diversification of economy, scientific innovation, and cultural diversity should not hold grounds for anyone to discriminate against one another and to endanger the biodiversity. The novel by Wright (2018) encourages the lowly and less privileged in the society to be contented by their true identity and be confident to defend their values. The nature of our world encompasses everyone including individuals that hurts the environment through pollution and the harmless people that yearn for eco-friendly habitats. Thus, the impacts of climate change affect everybody and the book by Wright emphasizes that protection of the environment is a collective responsibility.
I am made to believe that this novel, The Swan Book was the greatest among my choices to address climate change. Everyone should be considerate and show a concern to the diversified knowledge of the continent, about its weather, laws of the land and cultural setup. Modernity should not be the reason to sacrifice the world. Ancient practices and indigenous values should not be completely ignored as most of them were practiced in the essence of taking care of the earth. Conservation of the environment as described by Wright is a broader perspective that ensures both exotic and indigenous cultures are respected and preserved. Indigenous people are equally important to their new foreign counterparts and the relationships should be fair not to disadvantage any of the participants.

The Theme of Climate Change in 'The Swan Book'. (2021, Oct 31). Retrieved from http://envrexperts.com/free-essays/essay-about-theme-climate-change-swan-book 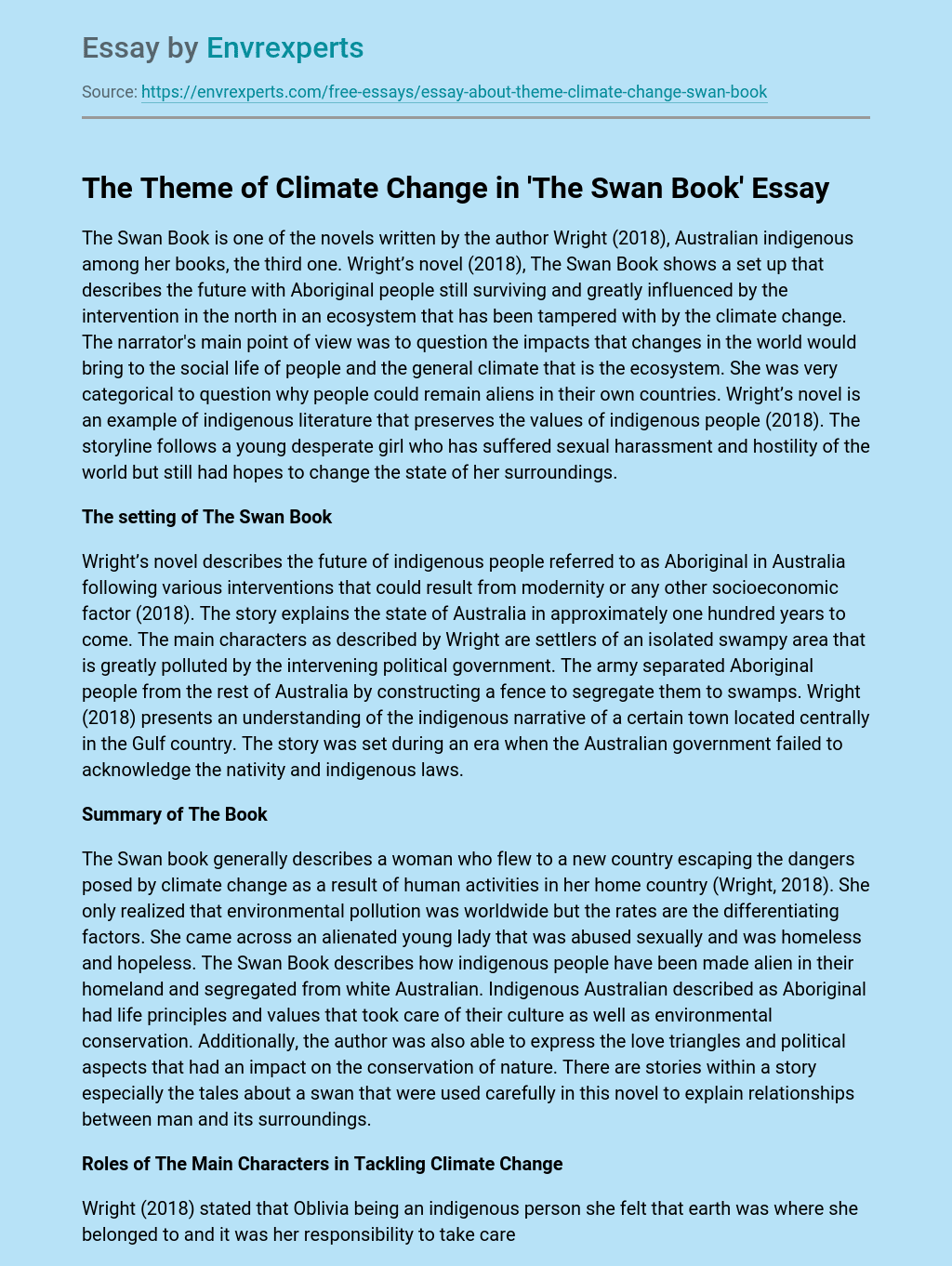