Theory of Political Realism and Cosmopolitanism

Don’t waste time
Get a verified writer to help you with Theory of Political Realism and Cosmopolitanism
Hire writer
$35.80 for a 2-page paper

On the other hand cosmopolitanism is the idea that all human beings are or could or should be members of a single community. Different views of what constitutes this community may include a focus on moral standards, economic practices, political structures and or cultural forms. This paper juxator positions these two theories in a bid to ascertain how the two can be used to shape the future of peace ethics.

However it must be noted from the onset that this endeavour may prove to be challenging as the definition of what peace ethics is, is fertile ground for academic debate.

Political realism- Political realism is a theory of political philosophy that attempts to explain, model and prescribe political relations. It takes as its assumption that power is or ought to be the primary end of political action whether in the domestic or international arena. In the domestic arena the theory asserts that politicians do or should strive to maximize their power whilst on the international stage nation states are seen as the primary agents that maximize or ought to maximize their power.

The theory is therefore to be examined as either a prescription of what ought to be the case ,that is, nations and politicians ought to pursue power or their own interests or as a description of the ruling state of affairs that nations and politicians only pursue and perhaps only can pursue power or self-interest.
Cosmopolitanism- refers to a cluster of ideas and schools of thought that sees a natural order in the universe (the cosmos) reflected in human society particularly in the polis or city-state. More broadly, it presents a political moral philosophy that posits people as citizens of the world rather than of a particular nation state. In this regard, cosmopolitanism represents a spirited challenge to more traditional views that focus on age-old attachments of people to a place, customs and culture. Cosmopolitan emphasis on social bonds rather than nation-states lays the foundation for its view of society ultimately evolving toward harmony and away from conflict.
Peace-According to (Galtung 1969) peace is not only the absence of war but it also entails the mechanisms that are put in place to ensure that such peace is maintained ,that is, what he refers to as negative and positive peace.
Ethics- This is that which in the circumstances is believed to be morally right and universally acceptable.

The aim of peace studies is the critical analysis of war, armed conflict and political violence as deeply rooted phenomena that affect the daily lives of millions of people around the world. The purpose of this analysis is not merely to improve one’s intellectual understanding of the sources or causes of these phenomena but also to provide us with an informed basis for effective action to end or resolve them. Peace studies involves a dynamic relationship between theory and practice and between peace research, peace education and peace activism.
At the level of theory one issue for peace ethics is the essentially contested nature of its core concept, that is, peace and the relative underdevelopment of its theoretical framework and methodology. The connection between peace ethics and political activism also raises questions about the normative assumptions of peace ethics and often provides a rationale for its marginalisation within academia and formal systems of education. This paper seeks to examine the issue for peace, its normative or ethical dimension by examining human agency and the possibilities for social change and thus show how cosmopolitanism and political realism may be used to shape the future of peace ethics.
Negative peace is negative not because it is an undesirable goal but because it is characterised by the absence or lack of these destructive social and political phenomena. Positive peace on the other hand is characterised by the presence of positive social and political phenomena such as justice, human rights, equality and well-being.
Additionally, it is suggested that positive peace provides the essential conditions of negative peace because war, armed conflict and political violence result from the absence of positive peace. According to (Harris 2004) positive peace is a condition where non-violence, ecological sustainability and social justice remove the causes of violence. This distinction between negative peace and positive peace did not originate with Galtung. Martin Luther King for example, also employed it and said that the true peace is not merely the absence of some negative force tension, confusion or war it is the presence of some positive force justice, good will and brotherhood (King 1957).

Cosmopolitan thinking can claim a long and venerable descent in western political theory that runs through Greek philosophy, Christian theology, Kantian critical theory and liberalism. In recent decades and due to the work of a few key scholars cosmopolitan thinking has undergone a revival across the social sciences. Emboldened by the end of the Cold War and partly funded by a newfound zeal within international institutions like the UN cosmopolitan thought has now achieved the status of an ‘-ism’ (Fine 2003). This subtle grammatical change has telling implications for the discussion of cosmopolitan ethics in world politics. On the one hand, the political nature of cosmopolitan thought is consolidated by its shift to an ideological or at least paradigmatic status. Automatically a key reason for looking at cosmopolitanism over other equally important traditions is a recognition that cosmopolitan agendas and authors are in a golden period of productivity and influence. On the other hand, the broadening of the term has created a problem of caricature. As Booth, Dunne and Cox (2001) argue:
Defenders of such thinking have sometimes had their work labelled ‘Kantian’, which for some critics implies the embracing of an out of date package of Enlightenment outlooks with all this implies for their views about international politics including an untenable universalism (Kant 2001).
Such caricature has often led critics to miss the often diverse and nuanced positions that fall under the broad rubric of cosmopolitanism. And to the extent that the papers presented here depart from the caricature they must all be considered in some sense beyond. So it is perhaps better to think about cosmopolitans as inspired by certain ideas. These ideas are those of the avoidance of unnecessary suffering because of war or poverty and the possibility of building institutions that can allow for the realization of freedom.
Political realism in essence reduces to the political ethical principle that might is right. The theory has a long history being evident in Thucydides’ Pelopennesian War. It was expanded on by Machiavelli in The Prince and others such as Thomas Hobbes, Spinoza and Jean-Jacques Rousseau followed the theory was given great dramatically portrayed in Shakespeare’s Richard III. In the late nineteenth century it underwent a new incarnation in the form of social Darwinism, whose adherents explained social and hence political growth in terms of a struggle in which only the fittest cultures or polities would survive. Political realism assumes that interests are to be maintained through the exercise of power and that the world is characterised by competing power bases. In international politics most political theorists emphasise the nation state as the relevant agent whereas Marxists focus on classes. Prior to the French Revolution in which nationalism as a political doctrine truly entered the world’s stage political realism involved the political jurisdictions of ruling dynasties whilst in the nineteenth century nationalist sentiments focused realists attentions on the development of the nation state a policy that was later extended to include imperialist ambitions on the part of the major Western powers Britain and France and even Belgium, Germany and the United States were influenced by imperialism.

As a starting point it suffices to note that political realism believes that politics like society in general is governed by objective laws that are rooted in human nature. It is necessary so as to improve society to understand the laws by which society lives. The operation of these laws being impervious to our preferences men will challenge them only at the risk of failure. It further believes in the possibility of distinguishing in politics between truth and opinion between what is objectively true and supported rationally by evidence and illuminated by reason. More so what is only a subjective judgment divorced from the facts as they are and informed by prejudice and wishful thinking.
For realism theory consists in ascertaining facts and giving them meaning through reason. It assumes that the character of a foreign policy can be ascertained only through the examination of the political acts performed and of the foreseeable consequences of these acts. One can find out what statesmen have actually done and through this one is then able to ascertain what their objectives might have been. It follows it is not enough to examine the facts alone. There is a need to give meaning to the factual raw material of foreign policy we must approach political reality with a kind of rational outline a map that suggests to us the possible meanings of foreign policy. In other words we put ourselves in the position of a statesman who must meet a certain problem of foreign policy under certain circumstances and we ask ourselves what the rational

Theory of Political Realism and Cosmopolitanism. (2021, Oct 31). Retrieved from http://envrexperts.com/free-essays/essay-about-theory-political-realism-and-cosmopolitanism 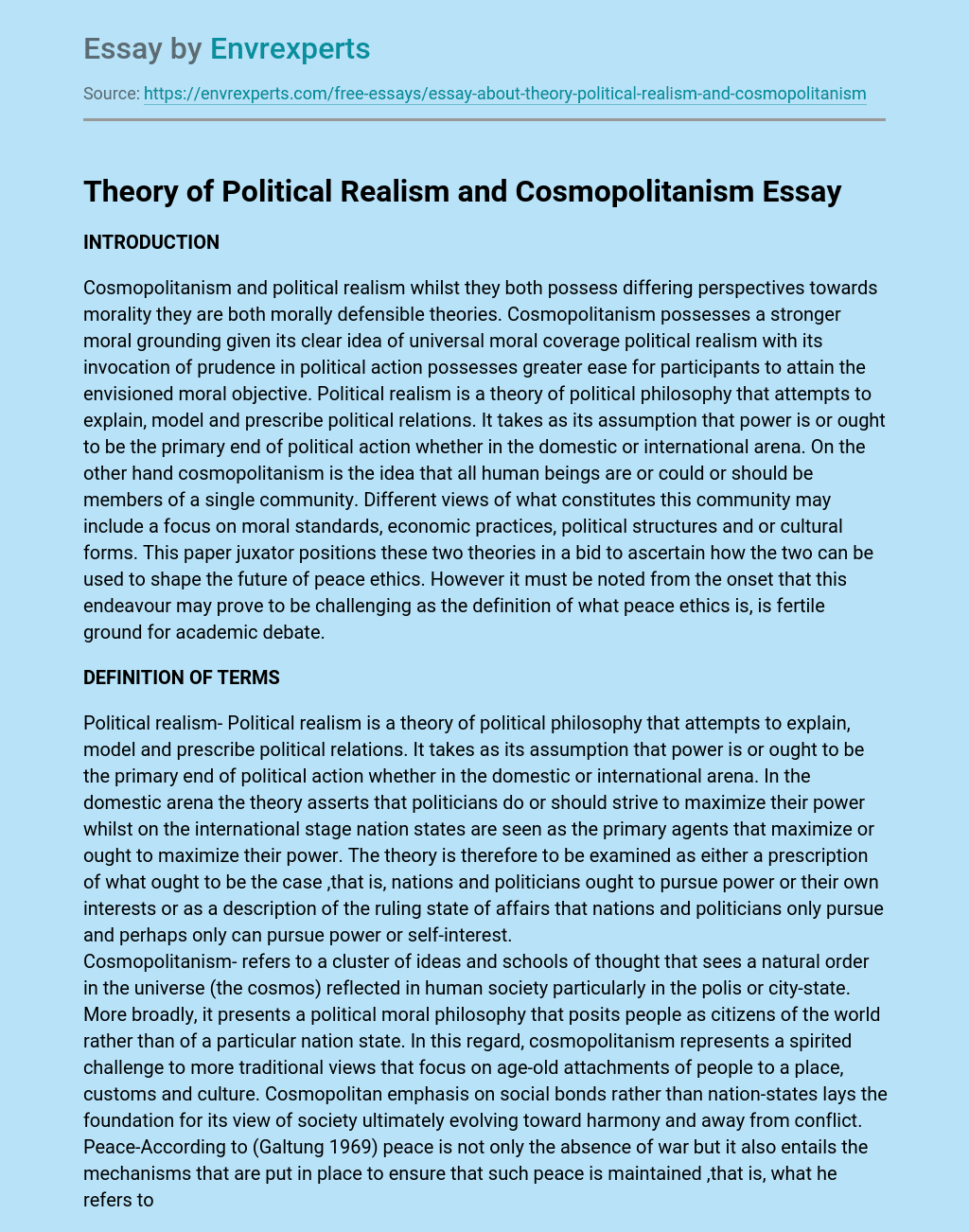