Topic of the Issues of Pollution in the America

Do you ever wonder what you are inhaling into your lungs? Are you concerned? When you drive past large chemical plants, do you see the large amounts of smoke continuously being released into the air? Did you realize that the pollution released is probably more than legally released? Many people do not consider the danger we are in. We are breathing chemicals into our lungs that harm our bodies and organs. Many industrial plants release excess amounts of these pollutants, and environmental agencies are not even aware of the absurdness.

Don’t waste time
Get a verified writer to help you with Topic of the Issues of Pollution in the America
Hire writer
$35.80 for a 2-page paper

My friend has deathly allergies and the pollution that is released into the air could, with one two many breaths, kill her. One company released excess amounts of pollutants, then lied to environmental agencies and now has been charged for the crime, and the plant is previously not being investigated. These Industrial Plants should be supervised by environmental agencies at all times, to prevent the chemical pollution from being released excessively.

The air is now being polluted, and we are not doing anything about it. Two former managers at a chemical plant in Port Arthur, Texas have been indicted for lying to environmental regulators about how much the pollutants were being released from the plant. These two men are accused of releasing false information to the Environmental Protection Agencies and Conservation Committee of Port Arthur. This is a personal matter between the two gentlemen and the court, yet this is a public matter between chemical plants and America. Who wants pollutants and waste sifting through the air we Slaughter 2breathe into our lungs? The lawyers say it is a silly prosecution ; these lawyers should be aware of the danger this causes to communities, cities, and to the country.

Huntsmen associates of Petrochemical Corporation, agree with the lawyers citing that they believe the men did not break the law. Does this not worry anyone? America is innocently breathing in polluted air, continually infesting our lungs with chemicals. This air could be the air that is passed through a pregnant mother to her child. These two men have been claimed to lie about the pollutants from 1994-1997. These men lied for a long time without getting caught, just think of the others who could be lying right now, and we are not doing anything about it.

The men lied about the amount of pollutants, the cause of the emissions, and the steps taken to correct the problem. U.S. attorney for the Eastern district of East Texas says the system of environmental protection depends on truth reporting, by industries that are regulated, and failure to do this undermines the regulatory process. This kind of a case should send a strong message t other plants and corporations along with the individuals, should not be tolerated. The company has agreed to cooperate with federal regulators, yet there are many more violations the plant has broken as operating machinery without a permit, and worst of all excreting the harshest chemical pollutants into our air. The areas these pollutants are released are in a nonatainment location. This means it does not meet requirements of federal air quality standards. Texaco chemical was taken over by Huntsmen in 1994. Federal prosecutors acknowledged many problems existed at the plant before Huntsmen bought Texaco, and now the Texaco plant is not under investigation.

The plant where the incident occurred should now be under supervision. Be aware of what you are innocently breathing into your lungs. Excessive amounts of chemical pollutants are released into the air, and we will never be aware unless the plants are not supervised. It is only for our safety to enforce the idea of plant supervision. Our lungs are infested with dirty air, and we need to do anything we can to prevent the air from excessive pollution. *** Should chemical plants be supervised by environmental agencies? Many industrial plants excrete excessive amounts of pollutant chemicals into the air we breathe. People with allergies, asthma, and anyone who cares about their health, whom should include everyone, needs to realize the danger of allowing these industrial plants to go unsupervised. A prime example of the crime committed is of the two men who were charged with releasing large amounts of pollutants from the Texaco plants. Chemical pollutants are harmful to human s bodies. The toxic release inventory and regulatory agencies provide listings of chemicals that can cause cancer, harm, to the immune system, and contribute to birth defects, or lead to many other types of health impacts. From this survey, people should be very afraid to the air we are breathing into our body s everyday.

The Texaco Chemical Plant, where two men were charged with releasing excessive amounts of pollutants into the air, the chemicals in the pollutants were researched and found to be health hazards. Some of the hazards are skin or sense organ toxicant, respiratory toxicant, cardiovascular and kidney toxicant. These serious health problems Slaughter 4should alert people of how serious excessive pollution can be. Industrial plants should be supervised by Environmental Protection Agencies. If plants are supervised by these agencies, then the public will be assured that excessive amounts of chemical pollutants will not be released into the air, the air that we breathe into our functioning systems everyday.

The people who already have to worry about their own health should agree with the idea of supervision of industrial plants. The Texaco Plant case was discovered by Environmental agencies. This incident had been happening for nearly four years, before it was discovered. If protection agencies had been supervising, then the incident would have never happened. Pollution is released everyday, yet we are not aware of just how much is released. Supervision of industrial plants is a great way to prevent pollution from killing us. If the chemical plants are not supervised, then the four years we do not know about the excessive pollution, could be.

Topic of the Issues of Pollution in the America. (2021, Oct 31). Retrieved from http://envrexperts.com/free-essays/essay-about-topic-issues-pollution-america 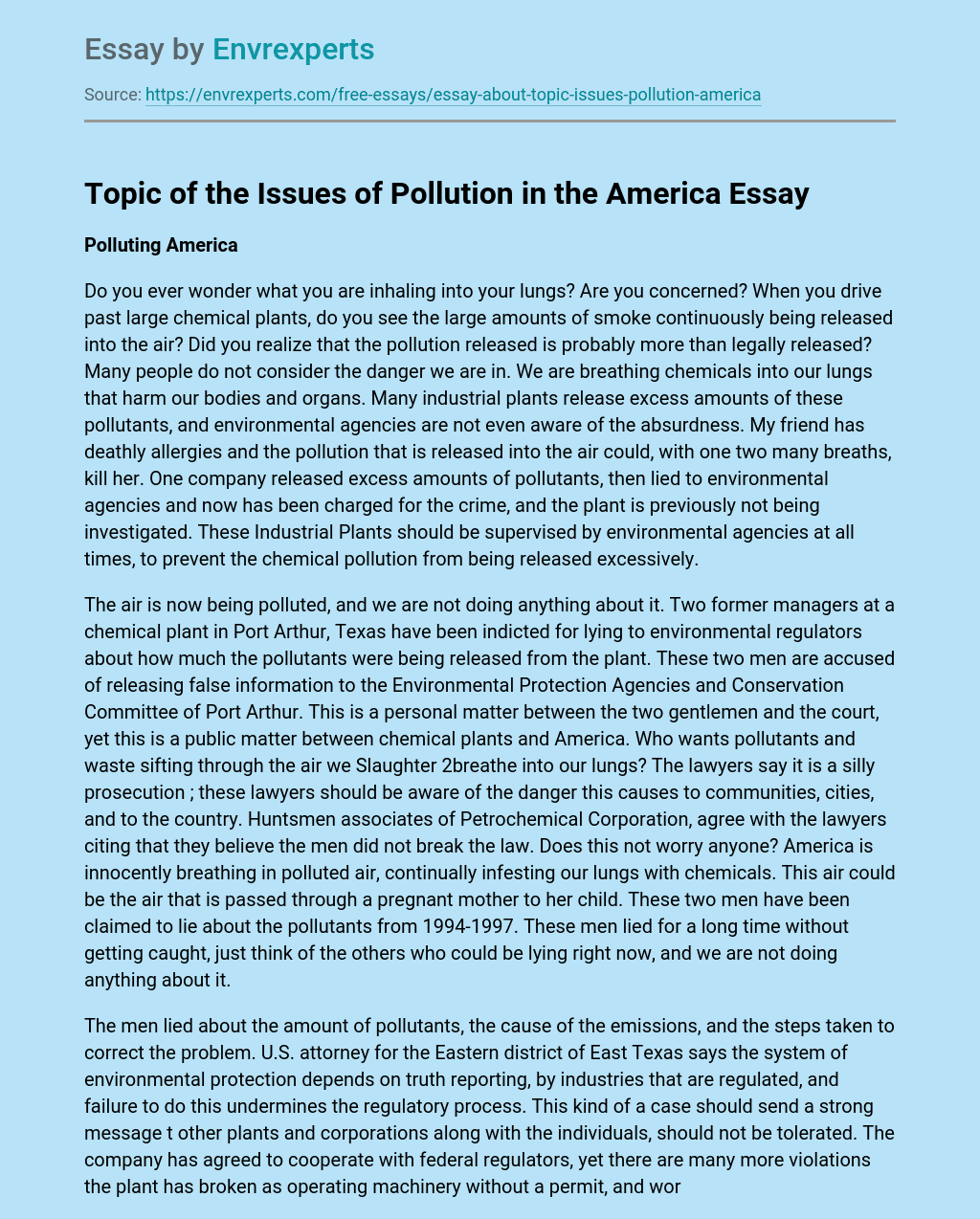