Don’t waste time
Get a verified writer to help you with Traditional and Cultural Approach Tourism
Hire writer
$35.80 for a 2-page paper

In their paper on informal tourism entrepreneurial practices in Chiang Mai, Thailand, Çakmak et al. (2018) referred to the necessity of a fit between a field’s conditions and the stakeholder’s capitals possession. Why is it important to require such a fit between the tourism field and its stakeholders? Explain it and discuss the possibilities of what would happen in case of a misfit.
Several fields exist at a destination. These include a field of power, economic, political etc.

Furthermore, several capitals exist. These include economic, cultural, social and symbolic capital. Some stakeholders may possess different amounts of each capital. It is important that there is a fit between the stakeholder’s capital and the field in which that stakeholder is operating. A misfit can have serious consequences including a lack of formal job information, as well as discrimination in the job market. This misfit may then lead individuals to start working in the informal sector. This means that the individual’s job lacks regulation leading to sub-par wages, bad working conditions, and of course, no income tax for local governments (Çakmak et al., 2018).
According to Marxian political economy, tourism contributes to maintaining the capitalist production and consumption system and its inherent relations of class power. Discuss this statement and in your discussion:

In capitalist production systems, the production systems are owned by private investors. Within these production systems, commodities/products are produced which are sold for a profit. This is what separates capitalists and workers. The capitalists are the private investors which own the production systems, and the workers work within those production systems against a wage. This creates a class division (Buijtendijk, 2020).
It can be clearly seen that tourism is maintaining the capitalist production and consumption system. Most (though not all) tourism enterprises are still focused on generating as much revenue as possible. They do this, especially in developing countries, through the exploitation of cheap and non-unionized labor, as well as through the exploitation of natural and cultural resources (Buijtendijk, 2020). An example of this can be the commodification of natural parks in Africa, allowing tourists to go on safari, as well as the commodification of temples in Thailand, where tourists’ money is taken in return for entry into what is a ‘sacred’ place which may have one day been used on a daily basis by locals, but is now likely used a lot less by locals because of the tourists.
Some signs from which can be seen that a capitalist production and consumption system is maintained in tourism, are for example, airlines, which used mass air transportation to maximize efficiency and profits (Buijtendijk, 2020). Another example would be all-inclusive resorts in Egypt or Turkey, which create one tourist experience which they fit to masses of tourists at once.
Tourism contributes to this capitalist concept of class power as well. Tourism jobs around the world tend to be lower class jobs, for lesser skilled and less educated people, and are therefore, also paid less, reinforcing a class system. At the same time, tourism, with all its capitalist attributes, is capable of empowering local communities, as (informal) local entrepreneurs create economic growth for the region, thus increasing personal, economic and political power (Çakmak, 2020b).
Why is negotiating proximity becoming increasingly important in the tourist cities? Give an example of how the three ways of negotiating proximity (embodied / psychological, symbolic and material) can be/are applied in controlling/steering tourists. Use destination examples to illustrate your answers.
Negotiating proximity is becoming more and more important in busy tourist cities. This is due to the extreme busyness (overcrowding) which tourism can bring to a city. This creates distressed global cultures and segregation between communities. Furthermore, spatial divides exist within these cities at three levels (horizontal, vertical and topological). At the horizontal level, a divide can be seen between the rich and the poor neighborhoods, creating segregation. At a vertical level, people live increasingly closer upon one another and it is important to consider the comfort of the inhabitants to avoid frustration. At a topological level, networks are getting more crowded than ever before. For example, road networks are busier because of tourists taking Ubers to the tourist attractions. It is important, therefore, to negotiate proximity and create more inclusive cities (Duineveld, 2020).
The three ways of negotiating proximity (embodied/psychological, symbolic and material) can be applied in controlling and/or steering tourists (Duineveld, 2020). An example of the first way, embodied/psychological, is the construction of a new metro line in Amsterdam, as well as a ban on certain individual motor vehicles in the city center. An example of the second way, symbolic, is the integration of several cultures at the Tropen museum in Amsterdam, where several cultures are represented and presented to tourists and locals. An example of the third and last way, material, are places such as public restrooms or queues at themeparks.
To analyze the strategic position of a destination, it is essential to understand its context. How could you study the context of a destination? Explain the context analysis in steps and give example(s) for each step.
It is important to understand the strategic position (context) of a destination in order to manage it effectively and create a competitive destination. Doing context analysis has four steps which need to be analyzed:

The environment can be analyzed, for example, by performing PESTEL analysis, building scenarios, doing market analysis or doing competitor analysis. The capabilities of a destination can be analyzed, for example, by doing an assessment of the available resources such as attractions and road networks etc. It can also be analyzed by looking at the competences of the destination and any distinctive capabilities which it possesses. The purpose of the destination is what drives the strategy of the destination. For this, it is important to take into account the roles and relationships of different groups and organizations involved in the governance of the destination. Lastly, the culture of a destination can be analyzed for example, by doing a historical analysis, looking at ‘path dependency’ (earlier decisions create policy pathways that effect new or subsequent decisions and policies) (Çakmak, 2020a).
In their article on sustainability and resilience, Espiner et. al. (2017) suggest that (sustainable) tourism can contribute to resilience, for instance of tourism destinations. Discuss this point of view and illustrate your argument with examples of tourism destinations or, alternatively, examples from the SCITHOS Destination Resilience Game we played in class.
Resilience is understood as the capacity of a system to absorb disturbance and reorganize while undergoing change. Sustainability describes the maintaining of an activity over a longer period of time, accounting for long term changes and adjustments that need to be made to avoid incremental threats to their longevity. The two terms ‘resilience’ and ‘sustainability’ both include the element of handling disturbance to the currently undertaken activity, but both on a different time scale (short and long term respectively) (Espiner et al., 2017).
To some degree tourism can contribute to the resilience of a tourism destination because of the economic benefit and prosperity which tourism can bring along. This additional income can make sure that external economic downfalls are less significant. For example, the state of Alaska has a large fishing industry. If Alaska is capable of growing its tourism sector, this can minimize the economic damage which is done should the fishing sector collapse. However, destinations may not become too dependent on tourism, as that decreases the resilience of the destination significantly. For example, Curacao is highly dependent on its tourism industry. Now, with the Corona virus, Dutch tourists (the main incoming nationality in Curacao) are not allowed onto the island anymore, creating detrimental damage to the island’s economy.
To this extend, sustainable tourism, which is often considered a niche market in tourism literature, and is therefore, not the sector on which the tourism destination relies to create its main revenue stream, can offer a contribution to the resilience of a tourism destination. 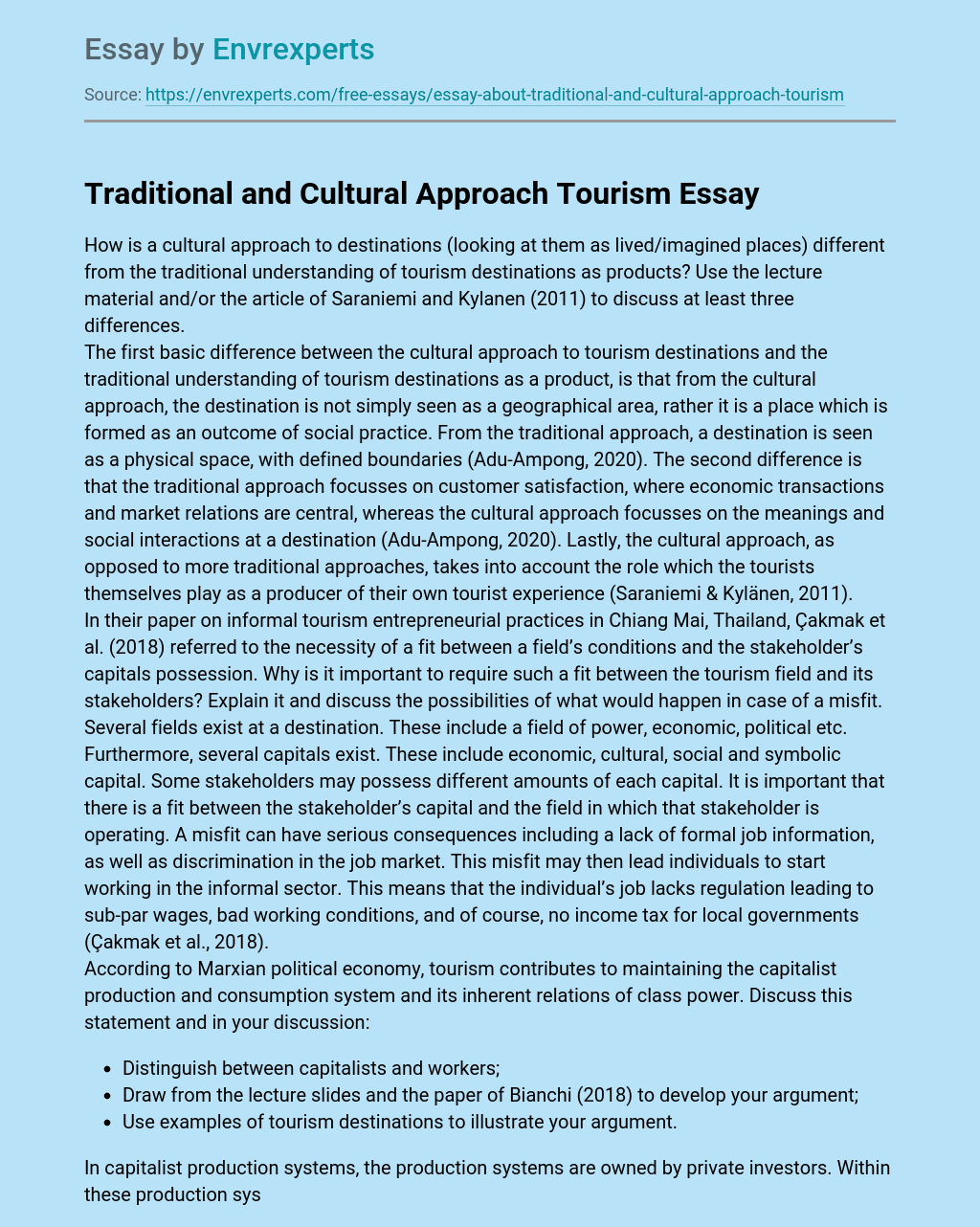