Humans have developed an addiction to fossil fuels, utilizing the non-renewable resources found on Earth to drive our economy and societal development. Today there is a scientific consensus that our climate is changing at a rapid rate that has disturbed natural cycles that all life on Earth has evolved with and this disruption is onset by human action. The need to transition to sustainable, renewable sources has become ever more prevalent and yet the tar sands in Canada have caused distress for the environment and the general public.

Don’t waste time
Get a verified writer to help you with The Tragedy of Tar Sands and the Consequent Destruction of the Keystone Pipeline
Hire writer
$35.80 for a 2-page paper

Canada is a resource-rich country with a wide range of biodiverse regions and a peaceful democracy, which has attracted many cultures to migrate to and visit this great nation. The province Alberta also puts Canada on the map as the third largest oil reserve in the world as the tar sands contain 166 billion barrels of bitumen also known as crude oil, which has a very high expense for extraction (Facts and Statistics). Stephen Harper, the Canadian Conservative Prime Minister in power from 2006 – 2015 made it his goal to make Canada an “energy superpower”.

His plan to create an energy sector based on extracting bitumen oil from the earth in Fort McMurray, Alberta resulted in forming the relationship with the corporation, Trans Canada to form the Keystone Pipeline. Tar sands contain clay, sand, water, and bitumen, which is thick black oil, also known as the dirtiest oil found on our planet. The mining process extracts bitumen from the ground, separating it from the rest of the natural material through destructive processes such as strip mining or open pit mining.

The Canadian tar sands sight sits below 141,000 km’of boreal forest in which 3,400km’have been lost for mining purposes (Thomas-Müller). This ecosystem homes endangered species like the gray wolf and woodland caribou and play a vital role in carbon storage, which absorb over twice as much as CO2 than tropical forests (Peterson). Furthermore, the mining process causes soil erosion and the run-off from rain pollutes agricultural land and water systems eventually poisoning the people. But to be of further use for human's bitumen must be refined into oil and transported requiring more land and causing more damage to the biome, including the people within it.

The first phase of the massive transport system of the Keystone Pipeline was completed in June 2010. This aspect of the system includes 232 miles of new pipeline and 16 pumps from Hardisty, Alberta, 547 miles of converted natural gas pipelines from Saskatchewan and Manitoba and a new 1,084-mile pipeline running through the United States of America. The first phase carries bitumen through North Dakota all the way to Steele City, Kansas where it diverges east to Wood River Refinery and Patoka, Illinois. (Keystone Pipeline Starts Deliveries to U.S. Midwest). Phase two, the Cushing,

Oklahoma tank farm where reserves are stored and distributed, was completed in February 2011. The third phase, the Gulf Coast extension that transports crude oil to Port Arthur and Houston, Texas and Nederlands, Louisiana to be shipped to China have been constructed as of January 2014. The final phase, still underway, is the controversial Keystone XL Pipeline, an entirely new system from Hardisty through to Montana, South Dakota, Nebraska and Kansas to reach Cushing, Oklahoma where it would then be carried to export terminals. This new pipeline running through international borders has  been delayed, as a Presidential Permit is necessary to finalize the last phase, which was denied by President Obama on November 6th, 2015. The U.S. administration made this decision in regards to the impacts it will have on the growing issue of climate change.

President Obama, representing an influential nation, which has been glorified as a global leader taking climate action is concerned this project will undermine their efforts of cleaning up the environment and atmosphere. However, TransCanada is not going down without a fight and has filed a lawsuit under the North American Free Trade Agreement challenging the Obama administrations decision on January 6th, 2016 (TransCanada Challenges Keystone XL Denial). The case is filed under the eleventh chapter of NAFTA, which permits "multinational corporations to sue governments if they feel they have not been treated as a domestic company would be treated". TransCanada is demanding over $15 billion in compensation, which doubles the initial cost for the pipeline extension (Tencer). If TransCanada wins the case they will only receive the monetary award, as the panel has no pull on the decision of completing KXL, but the next President does.

This isn't the first court case for the TransCanada on behalf of the Keystone XL Pipeline. The original KXL route ran through the Ogallala aquifer, a shallow water table beneath the Great Plains, which provides freshwater to millions and quenches the agricultural demand as an irrigation supply. “About one-fifth of all U.S. cattle, corn, cotton, and wheat depend on the Ogallala" and any risk of polluting this vital resource must be prevented, as the economy would deteriorate as a consequence (Bjerga). The Nebraska route brought up much speculation from devoted farmers of this area and sparked their strong opposition where the state won a court case ruling that TransCanada unconstitutionally received eminent domain powers without the completed paperwork and do not have access to their land for the Keystone XL Pipeline (Kleeb). As a counter attack Trans Canada ended their efforts in their appeal to this case and instead has reapplied for state approval, in which Republican Governor Dave Heineman has approved through the pipeline-siting law (Press). The corporation clearly does not take the people directly impacted on the forefront of their potentially hazardous project in consideration and are ruthless in reaching their goal.

Contrary to the TransCanada estimate of one spill for every seven years, the first year of production, which started in June 2010 the Keystone Pipeline experienced twelve oil spills, more than any other pipeline in their infancy on U.S. soil. The largest of the twelve spills was the leakage of 500 barrels resulting in 21,000 gallons scarring Brampton, North Dakota. Even though there was much research conducted on behalf ofthe corporation to support this huge endeavor, actions speak louder than words and with a haunting past leaving its mark across the country the original Keystone Pipeline has evidently failed the environment and the people. Bob Banderet, the rancher who reported this spill has gone to great lengths to oppose KXL by testifying amongst many others in Nebraska and remains unsettled with the tar sands operation (Dalrymple). The majority of those directly impacted by this project have stood up against it, money unable to bride them, but still TransCanada hotly pursues the extension even though they original pipeline system is already function and has caused its fair share of trouble.

Although the pipeline extension is currently on hold the destruction has already been done. In Canada, a nation that takes pride in equal rights to clean air, water, and soil, the greenhouse gas emissions have escalated with the tar sands mining procedure releasing three times more CO2 than any other oil extraction practice. The Canadian tar sands operation is the second fastest rate of deforestation eliminating prime boreal forest to create the ghastly work site in Fort McMurray. Furthermore this procedure requires five barrels of water for every one barrel of bitumen produced, which lessens the supply for irrigation and reduces the healthy drinking surplus for humans and wildlife (Oil Sands Truth). As a result of complete neglect to the environmental, the Athabasca River Basin, the prime fishing and drinking source for Métis, Cree, and Dene populations has been poisoned and rendered unfeasible for those reliant on on it. Treaties eight and eleven, which entail the “fundamental right to exist as an indigenous peoples” have been totally disregarded in the tar sands operation (Thomas-Müller, 2008). Keystone is an economically driven project that focuses solely on quick production to make the best profit causing rapid and disturbing changes to the natural world that many indigenous tribes depend on. Their livelihoods have been totally interrupted and many have faced critical health issues where a rise in cases of rare bile duct cancer occurring in an unusually high concentration within Fort Chipewyan, a reserve located 300km downstream the tar sands. Lupus and renal failure have also spiked since the dirty practice has begun. To make matters worst, Dr. O'Connor, the leading physician of this area was suddenly and wrongly fired after questioning the abnormalities occurring in tar sands neighboring land (Nikiforuk). Further demonstrating that the corporation will pull their strings in any which way to make their dark vision a reality. Their actions have negatively altered the lifestyles of so many people, which do not have the team of lawyers or the billions of dollars to battle back.

When one harms the planet it consequently harms the people living on it. Despite popular belief, humans are apart of nature and our current actions are digging our grave. Rather than handing corporations like Trans Canada the shovel people need to rise and climb out to redemption. The top 1% of the developed nation of North America have held their power and money over the majority for far too long. The issue of tar sands and the Keystone Pipeline has brought awareness to this discrimination and has empowered the many to join the environmental movement and stand up for their rights. Too many have been silenced wrongfully, too many have fallen ill helplessly, too many have been manipulated deceitfully. The tar sands operation does not have the general publics interest in mind but are concentrated on making profit from our planet and have demonstrated where their loyalty lies. They are against anyone or anything that stands in their way and will inhumanly eliminate any threats. This pipeline may run through the heart of North America but it has no heart itself, the intention and integrity not representing the masses.

The Tragedy of Tar Sands and the Consequent Destruction of the Keystone Pipeline. (2021, Oct 31). Retrieved from http://envrexperts.com/free-essays/essay-about-tragedy-tar-sands-and-consequent-destruction-keystone-pipeline 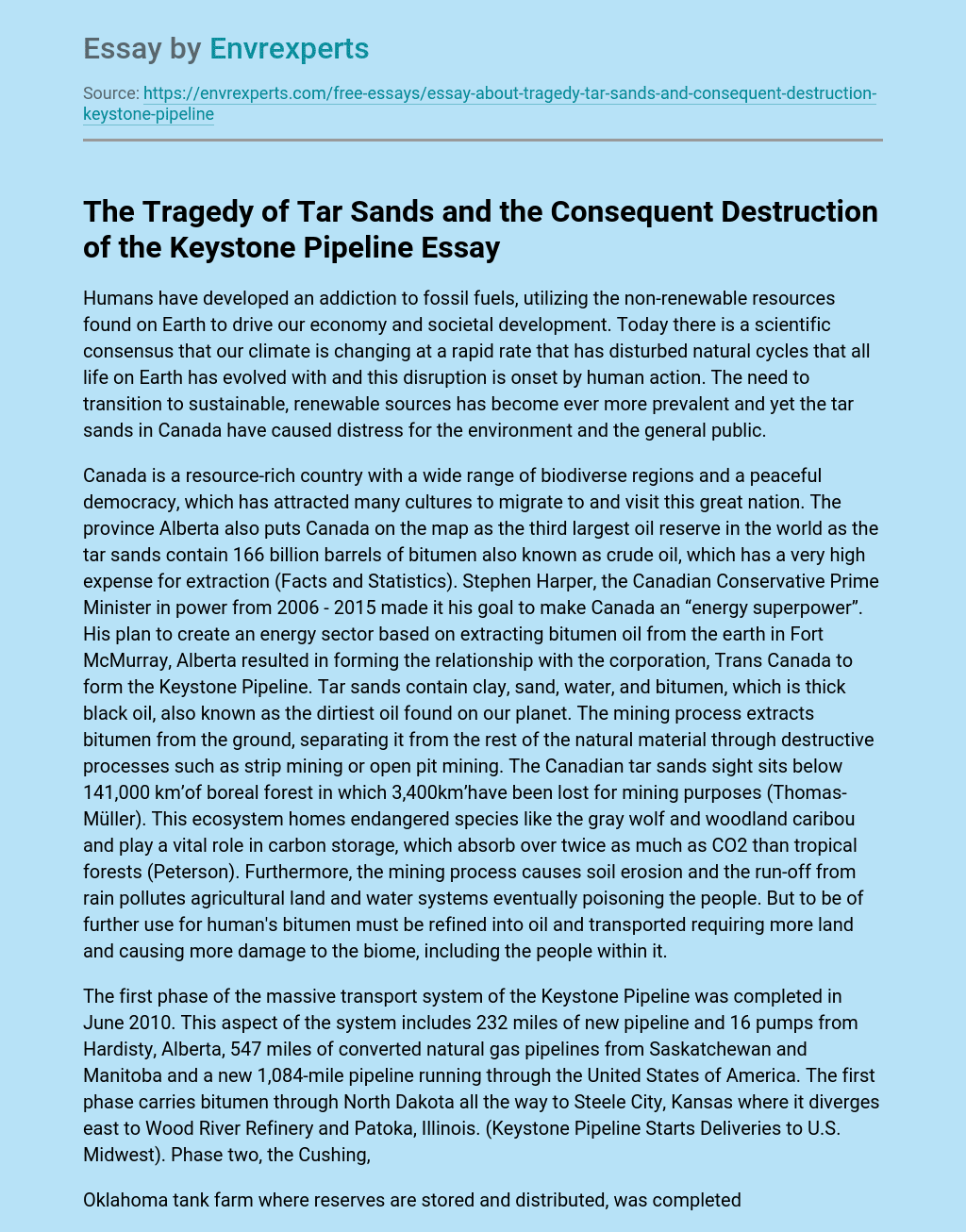