Transnational Company's Impact on the Environment of Third World Countries

The typical Transnational Corporation (TNC) is a large firm based in a First World country with sales in hundreds of millions or billions of dollars, with affiliates or subsidiaries in several Third World country. 'This ability to move capital, technology and entrepreneurship across national boundaries and the economic significance which in several cases is worth more than the total GDP of some poor countries provides them enormous power and results in governance without government.?The presence of TNCs in Third World countries are encouraged by favourable economic conditions, such as reduced operating expenses and cheap labour but their operation causes environmental hardship for host communities and contributes to the global environmental degradation.

Don’t waste time
Get a verified writer to help you with Transnational Company’s Impact on the Environment of Third World Countries
Hire writer
$35.80 for a 2-page paper

However, numerous TNCs have realized the importance of not only being part of the problem, but being part of the solution as well. This essay will analyse if transnational corporations as private authority are able to tackle environmental degradation, and if so, it will illustrate with examples the  effectiveness of these efforts.

In doing this, the essay will address the success of NGO cooperation with TNCs in terms of environmental protection. To illustrate this point, the essay will use the example of the WWF and Volvo partnership in the climate savers programme, as well as the WWF cooperation with fashion brands to fight against toxic wastes. Also, the essay will present the advance of TNCs over certain poor countries, because of their financial and technological independence to tackle environmental problems in the first place.

Greenhouse gas emissions is a serious environmental challenge which calls for the need of effective innovations in the industrialised world.

The temperature has already risen 2 degrees above pre-industrialized level and scientists predict a rise above 4 degrees, which can be catastrophic and irreversible. The major cause of the rise in temperature is the CO2 emissions, therefore there are several attempts to regulate it but given the statistics, the Multilateral Environmental Agreements and market based regulations, such as Cap and Trade system does not show success. However, a transnational corporation, Volvo Group realised that the companies who produce carbon-dioxide have a huge duty to take part in protecting the globe. Ensuring environmental integrity is not only the responsibility of nation-states but of the corporations as well, as they cause the problem. Volvo Group joined forces in the Climate Savers program with the Worldwide Fund for Nature (WWF), which is one of the world's largest and most respected environmental organizations and committed to stopping the degradation of the planet's natural environment.4 Volvo Group claims that as a leading company, they need to take leadership position and encourage other vehicle manufacturers for the needed innovations. Volvo's commitment includes reducing CO2 emissions from products and production, as well as developing truck prototype with lower fuel consumption and developing technologies with efficiency improvements. The results are checked by independent experts. This cooperation between an NGO and TNC seems more efficient than the national commitments, as manufacturers are directly and voluntarily involved.

Corporations are bound to make decisions which serve their economical interest, therefore it is right to assume that Volvo sees profit in investing in environmentally friendly innovations. Environmental protection usually seen as a waste of money as it does not have short term revenue. However, thinking responsibly can be profitable. As it is a positive advertisement of the company, users of their products can also contribute to the good cause and this encourages them to buy their products rather than the more polluting one. Also, this modernization has a significant long-term revenue not just for the company but for the vehicle user too, as it will require less fuel. Volvo's commitments exemplify that transnational corporations are able to contribute effectively to solving environmental degradation and Volvo is determined to serve as an example to follow in this path. Therefore, Volvo Group hosts climate changing seminars with WWF as a strategy to promote the advantages of making a change and to share existing knowledge and resources to help its sector make a difference for future generations.

Another pressing problem is toxic waste pollution, which requires TNCs to stop polluting and change the way of manufacturing their products. Produced toxic waste has been associated with the increase in miscarriages, birth defects, skeletal disorders and this toxic waste poses a threat to TNCs host regions' water supplies. The fashion industry is a huge toxic waste polluter, as clothes contain hazardous chemicals, whoseconduction into natural waters results in the lack of access to clean drinking water. Given the fact that fashion is a billion-dollar business, it is possible to notice that it has the financial resources for the needed change; for the production without hazardous and hormone disrupting chemicals. Between 2003 and 2006 WWF ran a Detox Campaign to make European citizens and decision makers aware of the lack of safety information for the large majority of chemicals used in daily life. The campaign was successfully managed, run in parallel in 13 European countries and usedvarious communication tools of media to raise and hold the public's attention. The campaign's strategy was consumer boycott and pressure on polluting companies. As a result of increased attention, numerous fashion brands, such as H&M, Adidas and Puma have joined the campaign and successfully made full zero discharge commitments. These contributing corporations have ambitions of eliminating hazardous chemicals from their products and they make their process open to public, which provides a new type of marketing source. As this campaign reached a huge number of people in several countries, including fashion designers and models, the committing companies not only fight effectively against environmental degradation but it provides positive reputation for their brands. Economically, these transformations include financial costs for the companies but they result in efficiencies in the long-term, such as decreased healthcare costs and lower tertiary environmental clean-up costs, which lower the overall costs. The more companies taking part, the more effective is the outcome and the commitments of the previously mentioned brands can be seen as the beginning, which leads to further committers who are willing to make the right steps and actions.

In terms of global environmental protection, the emphasis is on the commitment of TNCs, as their industrialisation is the main cause of environmental problems. This approach is commonly accepted, as representatives of big transnational corporations, such as Shell or Coca Colaare also invited to climate conferences. It is essential to notice the huge advance of TNCs over poor and underdeveloped countries. Poor countries have to tackle their citizens' basic needs, like healthcare, adequate transportation and infrastructure; but there are countries where fighting against starvation and terminal illnesses are the main issues, so that environmental protection is at the end of the list. In contrary, transnational corporations do not have to face either of these issues and they possess or have the required money to posses the needed technology for environmental innovation. The financial independence of these corporations provides them the power that they cannot be forced to act out of their interest and to comply with Multilateral Environmental Agreements and their production is not strictly regulated. Promoting scientific understanding and promoting the success of already contributing companies are good ways to raise awareness of the problems and the possible solutions as well. Fortunately, the number of contributing companies is increasing, as well as cooperation between companies and the emergence of corporate-sponsored environmental regimes. At the same time, a shift is noticeable away from the state-centric models of governance to new forms of authority located in global economy and private governance. As the environmental regimes and the presented examples show, more and more transnational corporations realize the alarming need for technological, investment and production changes and the committing corporations are able to present massive successes in their sector. To conclude, this essay's main aim was to examine if environmental problems can be solved by transnational corporations, while evaluating their effectiveness. The essay supported the viewpoint that TNCs as private authorities can tackle environmental degradation effectively in their sector; while being aware that the majority of huge corporations are not taking part in environmental protection yet. They just do so-called greenwashing, so they only seem to be committing. The essay presented two types of environmental issues which are being solved by certain corporations. The first problem was CO2 emissions, which is successfully tackled by the cooperation of Volvo Group and WWF.

The two parties agree on targets to comply with, the execution is checked by independent experts, who confirm that the execution is well-managed, which provides an example to follow for the other vehicle manufacturers. The other issue the toxic waste, presented by the cooperation of WWF and leading fashion brands, who were able to make a full zero discharge commitment. Lastly, the essay compared the advance of TNCs over poor countries, which highlighted their ability to protect the environment. The raising awareness of environmental problems and duties, the increasing and effective contributions of TNCs and the probability of reducing manufacturer costs in the long-term with adoption of clean technologies allows the hope for future solutions of environmental degradation. 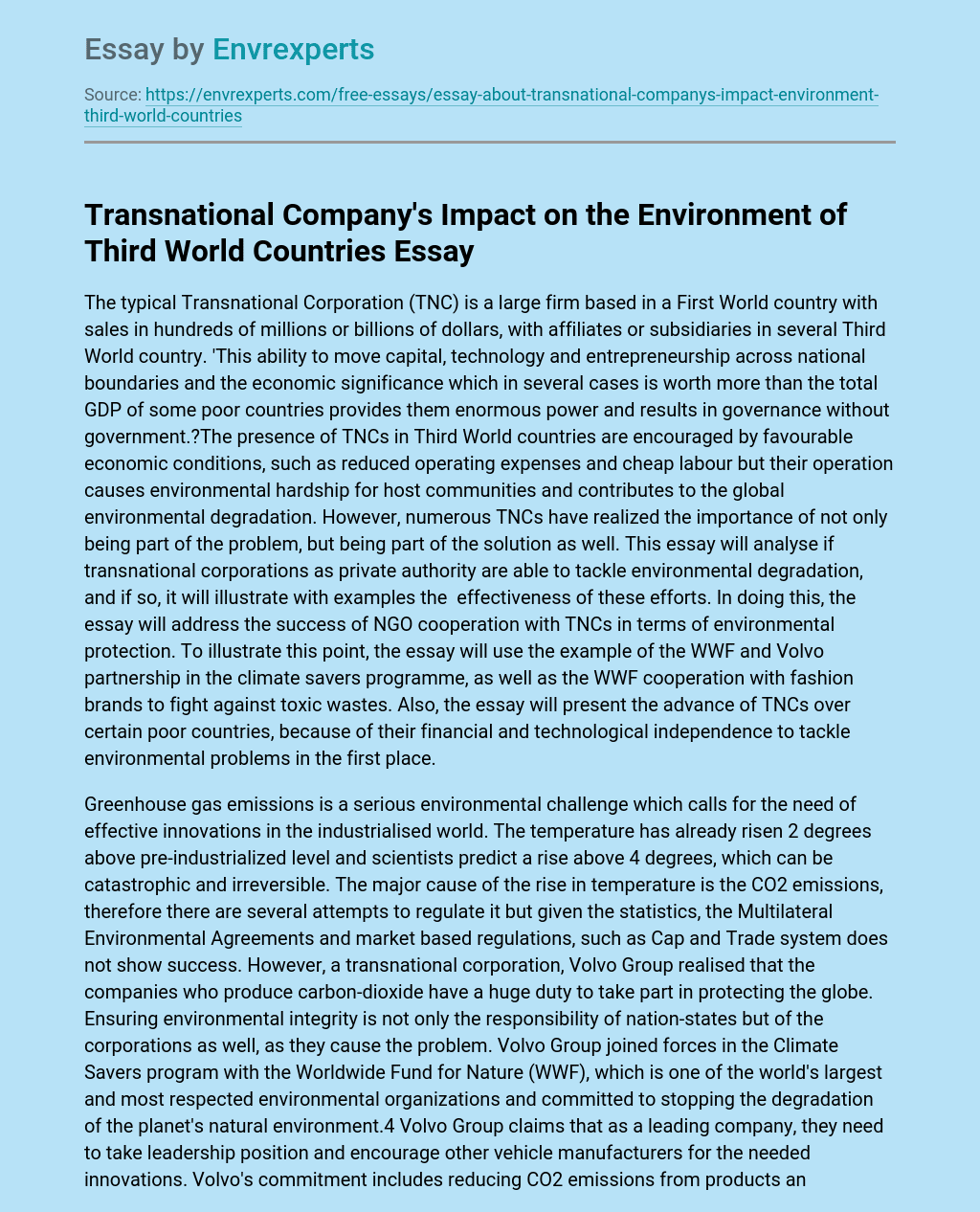