Climate Change is something everyone has heard about whether it be on the news in a classroom or just between friends. There is a lot of opinions and ideas that surround it. Some based on fact and some not so much. In this paper I will be discussing what climate change is, its origins, how it effects our water and also what we can do to make our own change to reduce carbon emissions. Before we go into the specifics of climate change, global warming, and CO2 levels, we must first understand what they are.

Don’t waste time
Get a verified writer to help you with Truth of Climate Change
Hire writer
$35.80 for a 2-page paper

Climate change is, according to the United Nations Framework Convention on Climate Change, a change in climate that is accredited to human activity whether it be directly or indirect, altering the composition of the global atmosphere. Global warming and climate change are often mistaken for each other, but they have distinct differences that separate them. According to NASA, global warming refers to the upward trend in temperature across the entire Earth since the early 20th century, and most noticeably since the late 1970s, because of the increase in fossil fuel emissions since the industrial revolution.

This is different to climate change, as climate change refers to a broad change of climate. CO2 means carbon dioxide which a gas that occurs naturally in earth's atmosphere. However, the CO2 level on Earth is increasing.

Dating all the way back to the ancient Greeks, many had suggested that humans could change the earths temperatures and influence rainfall by cutting down trees or irrigating a desert (Friedrich 2014).

Climate change had happened many times in our world in the past. But the cause of it wasn’t human related until the industrial revolution, back in 1712 when the first Steam Engine was invented by the famous British inventor Thomas Newcomen. This invention had set humankind to a new era and new world; by using new energy resources or more specifically, the combustion of fossil fuels. Afterwards, in 1824 French physicist Joseph Fourier found out about the greenhouse effect which he then states as the temperature of earth can be increased by harmonizing with the atmosphere, because heat in its state of light finds less resistance in piercing the air than in re-passing into the air (BBC).

In 1965, a US President's Advisory Committee panel tried to make the public understand the importance of reducing carbon dioxide emissions by saying that the greenhouse effect should be taken seriously and addressed as an issue. The first United Nation’s environment related conference took place in Switzerland in 1972, it mostly occurred because of chemical pollutions, atomic bomb testing, and whaling (BBC). Thus, resulting in the installation of United Nations Environment Program.

The Intergovernmental panel on climate change or the IPCC was the strongest force against climate change and CO2 emissions. Found in 1988 and published its first assessment and evidence of climate change in 1990, it suggested that because of human activity releasing carbon into the atmosphere the earth climate rose 0.3-0.6 degrees Celsius (BBC). Thanks to the intellectuals throughout the last three centuries, people finally started understood the potential dangers of climate change and excessive carbon dioxide emissions. Although, some of us understood the dangers, there was also some of us who weren’t really willing to take action. The carbon dioxide emissions from human activities reached eight billion tons per year in 2006 while IPCC\'s Fourth Assessment Report stating that the issue with global temperature rising is 90% due to human activity.

Carbon dioxide levels is specifically referred to as the concentration of carbon dioxide in the atmosphere. And human activities such as combustion of fossil fuel or emissions from our industries have strongly influenced it by adding a new ‘branch’ to the Carbon Cycle. The Carbon Cycle is nothing but a cycle of carbon as it says in the name. Carbon is a fundamental element cycle that is crucial to the survival of everything that is living on this planet because we all need carbon to survive and to obtain energy. The carbon cycle is complex as is everything in nature, in simple form there is the atmosphere, plants, animals, and decomposers. Processes that are included in the carbon cycle are mainly photosynthesis, cellular respiration, ingestion and death and decay. As mentioned above, due to human activity the carbon cycle has added a new branch in the form of combustion of fossil fuels. When plants and animals die and decompose, they become fossil fuels after millions of years under strong pressure and heat. These fossil fuels that come in the form coal and gas, are extracted from the soil and combusted in factories or industries to make energy that produce products for the market.

However, if it is only an add-on to the carbon cycle then it wouldn't be such a severe problem as it is now. The problem is that people combust the fossil fuels and emit the carbon dioxide to atmosphere in such an excessive amount that the plants can't keep up at the rate it’s going to absorb the carbon dioxide away from atmosphere. This imbalance causes an increase of carbon dioxide levels in the atmosphere. Moreover, what causes the problem to be more severe is that regardless of the plants not being able to keep up with the rate of carbon dioxide emissions through combustion of fossil fuels, people also keep cutting down trees and plants and destroying habitats to make it suitable for people to build cities. This causes an imbalance in the carbon cycle and even reaches such a catastrophic level that it is causing the destruction of the cycle itself. This leads me to my next point, the Greenhouse effect.

Throughout the years, there have been many people, refuting the fact that climate change is real. With the spread use of technology, itёs easy for false information to be circulated on social media platforms. I want to look at one of these myths and debunk it. The popular myth I would like to look at is that the climate and CO2 levels are always changing, so it isn't a big deal. This may not be wrong. However, this can be easily confused if posted on someone's Facebook wall without context. And yes, it is true that the climate is constantly changing. Ice ages have occurred in a cycle for the last 700 thousand years, and there have been times that appear to have been warmer than the present despite CO2 levels being lower then than they are in the present (Lindzen 2009). These changes in climate were caused by greenhouse gases. For example, when there was a lack of greenhouse gases, the climate became colder, and when there was an increase, the climate became warmer (Zeebe 2012). Although it may be true that Earth has had ice ages and periods of heat, the changes in the past have always occurred slowly and naturally. In comparison to today, humans are emitting larger quantities of CO2 into the atmosphere at a rate that\'s never been seen before. In the past, when large amounts of carbon dioxide was emitted into the atmosphere, there were destructive consequences for life on Earth. For example, increased CO2 levels contributed to the reason behind the mass extinction at the end of the Triassic and Permian era (Lee 2014).

The effects of the excessive carbon dioxide emission are mainly due to carbon dioxide that is produced by human activity it enhances the Greenhouse Effect to a new level which many researcher fear because of its impact on Earth\'s climate. It takes only a small change climate to have a tremendous effect on everything around it. As you might know that we don’t have as much drinkable water left on Earth. There is less than 1 percent of water resources left that is drinkable and usable for us. Climate change caused by carbon dioxide emissions can lead to an increase of the precipitation rate in some regions of our planet (Cairoli 2017). This provides the conditions for sediments and pollutants to be washed off and removed from the atmosphere, and these materials end up in drinking water suppliers such as dams and lakes. Additionally, an algae bloom is likely to happen in those regions due to Eutrophication (excessive richness in nutrients in a lake) as the rain washes nutrients in the soil such as magnesium thus ending up into drinking water supplies. An example being Lake Tai in China, because of the algae bloom more than 2 million people were left without drinking water for a week. Furthermore, Cyanobacterium and Microcystis aeruginosa (micro-organisms living on algae) produced toxins that damaged the livers, intestines, and nervous systems therefore threatening the local\'s health in May 2007.

In addition to this, the food chains and food webs of areas such as Lake Tai were interrupted and eradicated. In other words, because the algae that covers up the lakes surface, light from the can\'t be absorbed by plants in the lake and the oxygen in water is taken by the algae that’s causing the fish and plants to die. For instance, as the sunlight are blocked for the seagrasses and beneficial algae in the lake, they will massively die out and cause the plankton\'s population to decrease because they have fewer food sources and can only feed on the harmful and toxic algae. Furthermore, as considering the Phytoplankton forms the bases of marine food webs and provide energy to each trophic level their population decrease will also cause a decrease in population of fish or any water species that feed on the plankton. Lake Tai is just one example of the domino effect that climate change can cause.

Now that we have explored many different aspects and effects of climate change, it's time to address the big question on everyone\'s minds: What can we do about it? The answer to this question is quite simple. While tackling complex issues like climate change and global warming might seem daunting there are many things that ordinary people like me and you can do in our lives to save our planet.

First and foremost, we need to talk about it. Create dialogue on the issue and have conversations. One thing we humans excel at is pretending things don’t exist, out of sight out of mind. But that’s no longer going to work because there is a literal a ticking clock on our planet. Secondly, stop wasting water. By reducing our water waste, we\'re helping to lower the amount of energy and money used to treat and pump our water. Some ways that everyone can stop wasting water is by taking are taking shorter showers, the United State Environmental Protection Agency (or EPA) recommends 5 minutes. Another way to wasting water is turning the tap off when brushing your teeth. It takes small simple acts like these to reduce your footprint and make a change. Lastly, using eco-friendly transportation (Electric Vehicles/Bicycles).

Taking more public transportation and having less private transportation is a major way to reduce carbon emissions. That may not be appealing to everyone, but it does make a difference after doing the carbon footprint calculator and replacing my car rides with bus rides I reduced my emission by more than a third. You can also maintain your private transportation by switching to electric cars and it would still reduce it majorly.

In conclusion, climate change and global warming is affecting our planet in more ways than one. It effects our water supply, habitats and marine life. Climate change is something we have known about for decades and it been causing more and more problems in throughout the years. Unless we take steps to reduce our carbon emissions this domino effect is going to continue on until there isn’t a planet for us to live on. 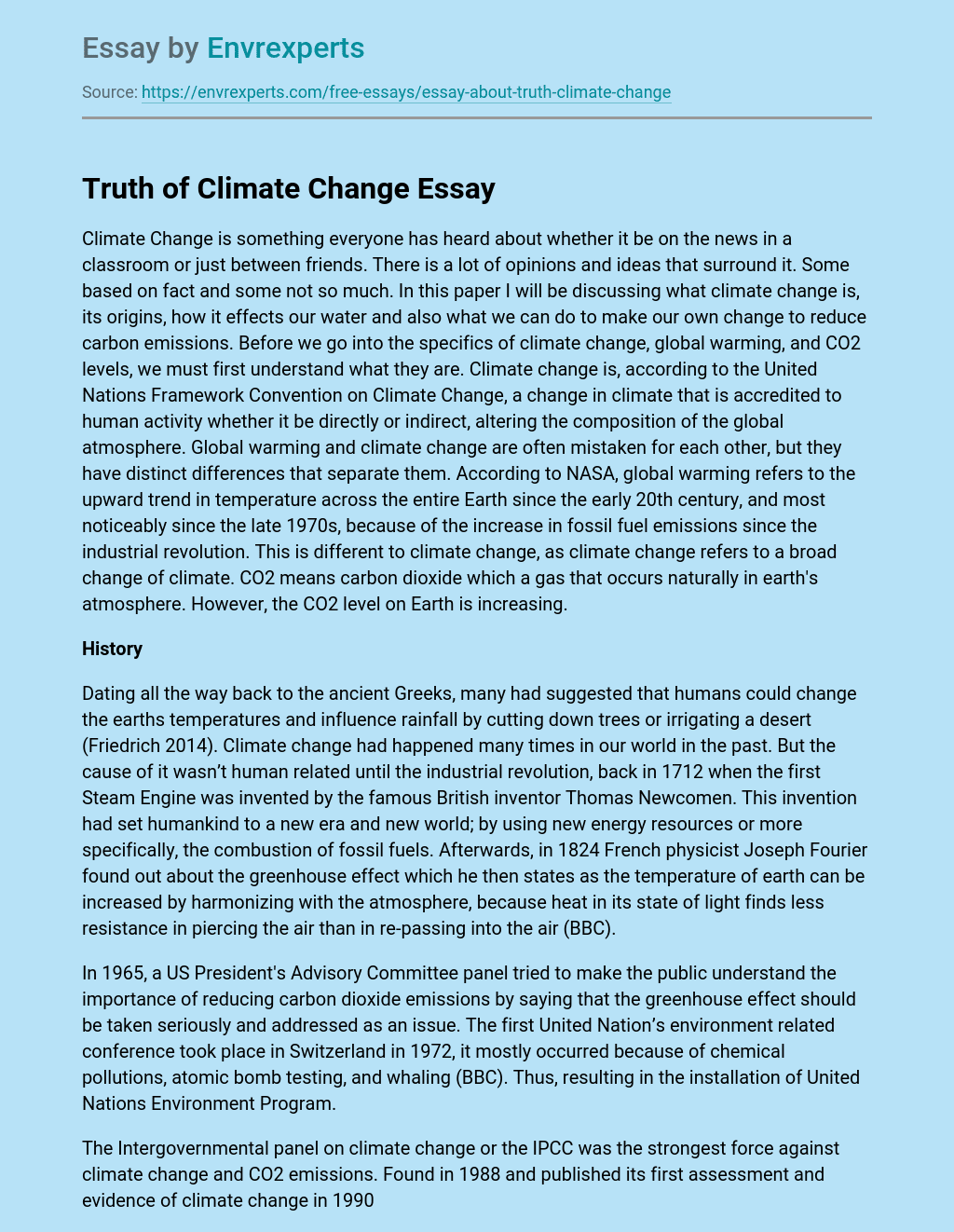