Unethical behavior is doing something wrong when it is known as being the wrong choice but still doing it knowing the consequences. Corporations are a prime example of unethical behavior and when something unethical happens in a company it becomes known to everyone. The BP oil spill was the worst unethical disaster in a corporation ever. This took the lives of 11 people,17 others and caused millions of dollars in lawsuits and destruction. Even years later communities are still suffering from this Oil spill and companies are still trying to survive after what had happened.

Don’t waste time
Get a verified writer to help you with Unethical Behavior of the BP Oil Spill
Hire writer
$35.80 for a 2-page paper

On April 20th, 2010 the gulf of Mexico was engulfed with oil and animals suffered because of unethical issues that could have been prevented.

The animals that suffered caused the economy to suffer greatly as well. The fishing and tourism industry lost millions of dollars because of the oil spill.

These industries lost more than $700 million and 3,000 jobs were lost because of the six months of the oil spill. BP had to spend billions of dollars to contain and clean the ocean and the mess the company caused and another $4 to $5 billion in penalties. BP’s economy endured a great loss because of the money they had to give up with the catastrophe of the disaster company’s cleanup costs estimated $37 billion which is equal to 3 years of their estimated sales from their customers and companies they work with. With the many penalties and negative impacts from this disaster, there were new drilling regulations in place and many settlements and lawsuits.

There were improvements towards the oil drilling regulations made as the “well control rule will affect offshore energy projects for years to come” and many of the problems if the rule wasn’t altered was more risks and less safety offshore(Valentine,2016). When BP plead guilty in 2012 they had to pay large of amounts of penalties for their actions to end their case(Rayman,2014).

Technology forces were changed because of these regulations as there were improved tech such as a safety equipment called a blowout preventer, with more requirements like double shear rams, and added safety tests by more inspectors from 55 to 92. This affected BP and other oil and gas companies as there would be better containment for deep-water drilling. There were many health concerns that were associated with this oil spill. Millions of animals died from the oil and toxins the oil spill brought to the gulf of Mexico. A chemical dispersant that BP used is more toxic and was only used in the pipes to break up oil. Because of this, traditional resources were depleted, and money was lost. BP lost a lot of their client base in just nine weeks when the oil spill happened with local companies feeling the same way. Many of the small businesses affected didn’t know how long it was going to impact them and because of that they had to lay off employees.

The internal environment of the company was at stake too. Just months after, the company fired their CEO and replaced him with someone else. Two supervisors had manslaughter charges but were dropped and still had to face allegations because they violated the clean water act. (Milman,2015) Many of the execs were to blame more than employees and many got charged with the oil spill. The former BP engineer was convicted of obstruction of justice for deleting texts and only sentenced to 6 months of probation. BP had the largest settlement out of all of this with the U.S. and 5 gulf states proposing it. Billions of dollars was paid from BP for penalties in the settlements as well as giving up money for the traditional resources that were destroyed and for the false claims act that costed them millions.

Morally it is wrong for so much oil to spill in the ocean and keep working when it was happening as it was proven. This example is unethical because many of their works were injured and some didn’t make it. BP didn’t take responsibility initially when it happened and the company had faulty pipes (Rascoe,2011). The environment was at risk with air and the ocean not healthy to be around anymore and not to breathe in. This oil spill harmed people and animals even businesses whose lives rely on the ocean and the marine life. The internal environment of the company proved just how unethical this disaster was with the employees and the board trying to change the circumstances of what happened.

The ethical dilemma from this example is about the prevention of this oil spill. This could have been prevented if the employees talked to the engineers but decided not to. BP employees knew about the faulty pipes and what was at stake before the oil spill happened. Even the company engineer was there consulting and they didn’t take any action to ask about the results from negative pressure on the rig. The rig kept working even when the oil spill happened which caused even more harm.

According to the Utilitarian approach, its about the greatest good for others and the benefits, Neither the company, workers, nor anyone else got the greatest good from this disaster. BP lost a lot of money and customers at the time of the oil spill. The regulations and the lawsuit didn’t come until years later so that didn’t help the environment at the time and the small businesses that suffered.

According to the individual approach, BP took this approach of the regulations later in the years to not harm others. This helps everyone in the long run with the regulations helping with oil drilling and making sure this doesn’t happen again. Ever since the regulations it hasn’t harmed anyone else and nothing like it has happened since then.

According to the moral-rights approach, the rights by everyone were shared and most people affected by this were given the rights they deserved. The employers, employees and the customers were given the same rights as many of the lives of humans were taken because of this. BP didn’t respect the moral rights of others though when the oil spilled as investigations were brought upon many of the executives.

According to the justice approach, BP didn’t use fairness when the oil spill happened, but it was fair when the company had to pay penalties because of their actions. Many of their execs were trying to hide it and were not fair to the businesses around the gulf. The way the corporation went about coming clean about the oil spill wasn’t fair when many small businesses didn’t know the impact of what would happen. No one from the company ever served prison time for the disaster which doesn’t prove any fairness in this criminal case.

A way to improve ethical climate in this corporations is more procedures and rules. Many of the problems came from less inspections and screenings where there should be more based on the environment the employees work in. With more inspections, there would be more control over the defects and can prevent it before it happens. Employees need to report anything that seems unethical and consult with more engineers to prevent this from happening ever again. Even screenings of certain employees would improve the ethical climate seeing if there were any implications in the past and know.

In conclusion, the ethical behavior from this corporation of this disaster was wrong. Because of what groups did and standing up to what was wrong, the company’s ethics changed and there were more procedures put in place. With the regulations and laws in place it has stopped any disaster like this ever happening. 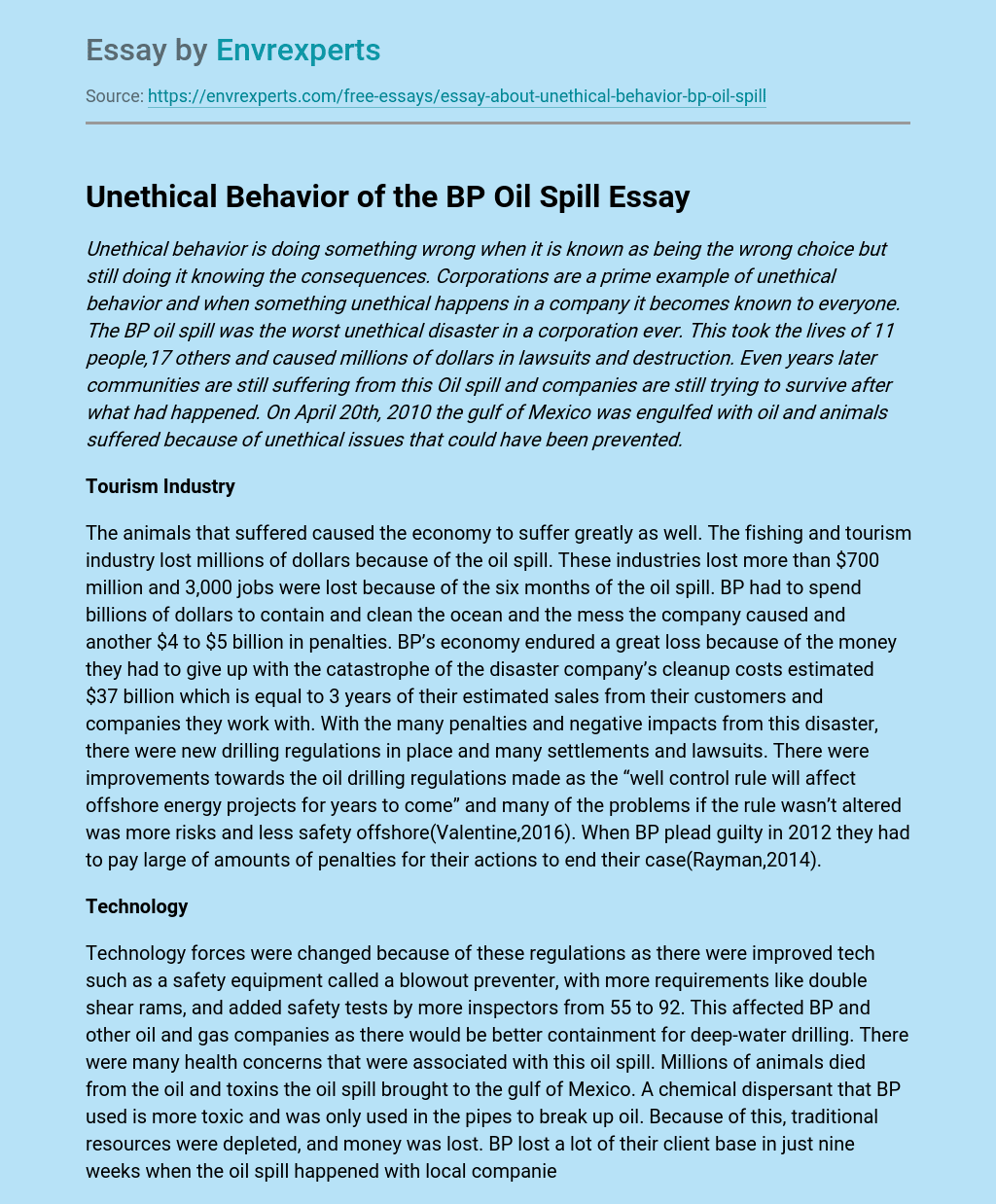