Pollution is the introduction of harmful substances into the environment that are toxic to man, plants and animals and can cause unpleasant changes in the environment. Due to industrialization and commercialization, oil is a major source of water pollution due to oil spillage and improper disposal. Oil pollution is an incessant threat caused on a large scale, hence, it is necessary for their effective removal from wastewater and large water bodies in general.
The type of oil being looked at here is lubricating oil (lube oil) which is a mixture of base oils and additives.

Don’t waste time
Get a verified writer to help you with Usage of Banana Peels and Environmental Pollution
Hire writer
$35.80 for a 2-page paper

Lubricating oils are used to reduce friction between moving surfaces, they are used in vehicles and generators. When lubricants are used for a certain period of time, it is necessary to change them because they would have lost its additive properties necessary for proper functioning, therefore they are disposed of. Most users of lubricants dispose them into nearby gutters and drainages which eventually find their way into streams and other large water bodies causing contamination of the water and destruction of aquatic life present.

Also, lube oil blending plants (LOBP) also have waste lubricating oil from production processes which have to be discharged into the environment.
According to Srinivasan, A. and Viraraghavan, T. (2010), there are several methods for oil removal such as chemical treatment, gravity separation, dissolved air flotation, chemical coagulation, filtration, membrane process and biological processes. All these processes are expensive and some of them are toxic (use of harmful chemicals) limiting its use in some areas.

Hence, the need for a cost effective and pollution free method.
Adsorption is a simple, cost-effective and common approach that can be used for oil removal. Adsorption is a phenomenon where molecules of the pollutant are attached to the surface of the medium introduced to remove the pollutant. The principle behind adsorption is adhesion, where the solute (pollutant) comes in contact with the adsorbent with a very large surface area in the solution and due to intermolecular forces of attraction, the solute adheres to the adsorbent thereby obtaining a pure solution. For this research, the solution intended to be purified is waste water containing lube oil, the solute to be removed is the lube oil while the adsorbent to be considered is activated carbon which is prepared by chemically activated banana peels, which are waste products.
Activated carbon is one of the most commonly used adsorbents, due to its adsorption capacity and large surface area. The surface of activated carbon is a little polar hence, it can be used for the adsorption of non-polar substances like oil. It can be prepared using carbon based substances such as wood and coal. Preparation of activated carbon using agricultural waste products can reduce the demand of other materials i.e. wood, which leads to cutting down of trees causing deforestation.
Banana peels are domestic wastes and industrial wastes. Fruit processing industries and the common man, generally dispose the peels after consumption and usage. Improper disposal can generate another form of pollution hence, the need to convert them into products of economic value. Banana peels are one of the agricultural wastes that can be used as adsorbents. This is because the fibres of banana peels contain high amounts of cellulose which has the ability to adsorb the oil.

It is a well-known fact that oil is one of the visible forms of water pollution capable of causing harm to aquatic life and humans. According to Ming (2016), the standard environmental acceptable concentration of oil in waste water should not exceed 100 milligrams per litre. Agricultural wastes like banana peels due to their biodegradability and low cost can be used for the removal of oil in waste water from lube plants and other users of lubricating oil who may not be able to use the expensive removal methods.

1.3 AIMS AND OBJECTIVES OF STUDY

The specific objectives of this research are:

The banana peels would be cut into smaller sizes, washed with water then dried. The peels would be blended, then sieved into various particle sizes. The various sizes would be chemically activated using H3PO4 for 15 hours then carbonised in the oven at 300⁰C for 2 hours. To get optimum conditions for the removal of lubricating oil from industrial wastewater, the experiment would be designed using the Response Surface Methodology by varying the particle sizes, adsorbent dosage and contact time. Also, the adsorption kinetics would be used to determine the adsorption isotherm that best fits the experimental data.

The following are some of the benefits of using activated fruit peels as adsorbents in this research project:

This research work uses only activated carbon produced from banana peels and raw banana peels for the adsorption of lubricating oil from industrial wastewater. 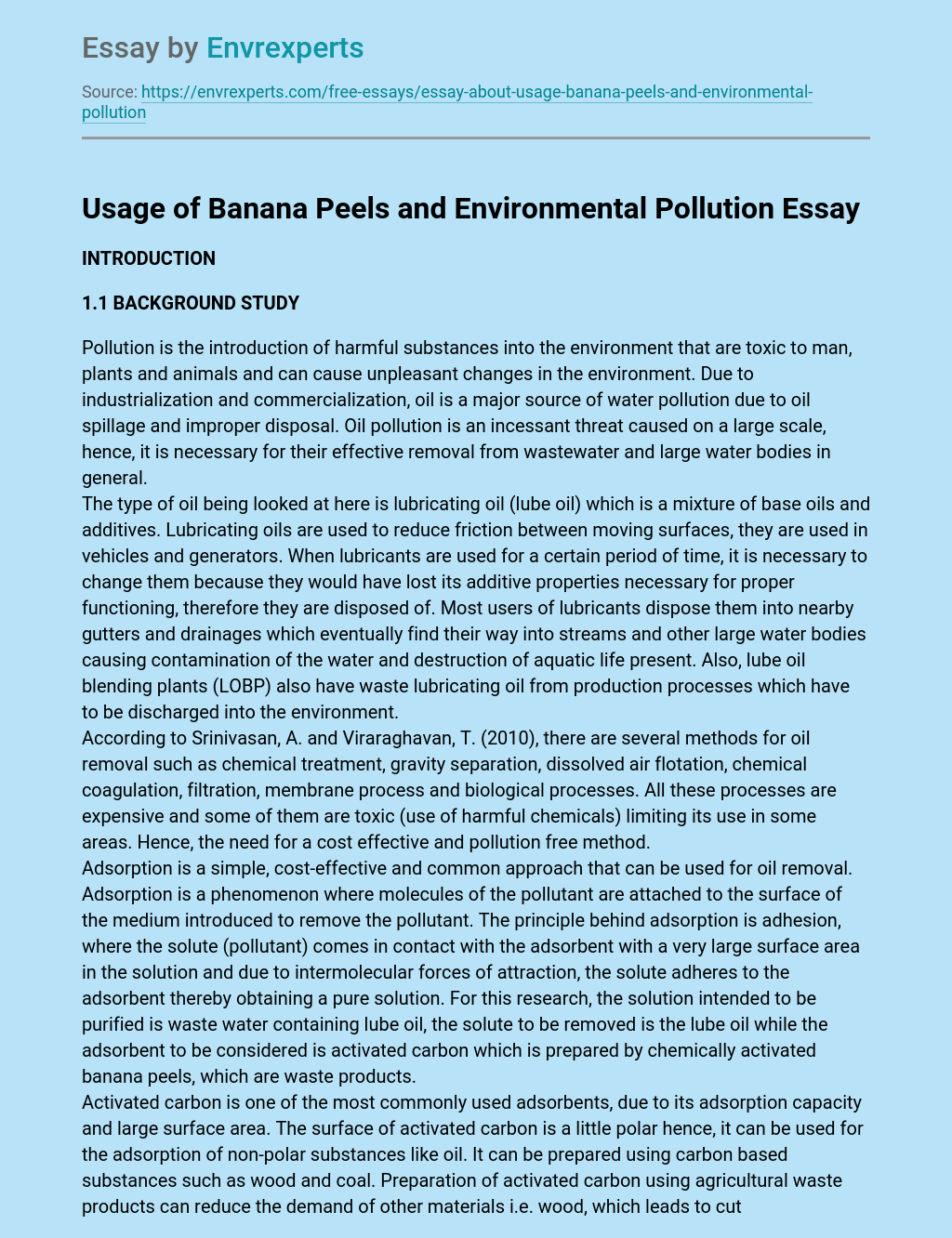