Usage of Cell and Microorganisms in Genetic Engineering

Biotechnology is a use of micro-organisms, cells, or cell components to make products. Microbes have been used in the commercial production of foods, vaccines, antibiotics, and vitamins for years. In addition, animal cells have been used to produce viral vaccines since the 1950s. Until the 1980s products made by living cells have been made by natural occurring cells; the role of scientist was to find the appropriate cells and develop a method for large scale cultivation of the cells. Now micro-organisms as well as entire plants are being used as factories to produce chemicals that the organism doesn’t naturally make, this is made possible by inserting genes into cells, rDNA technology which sometimes is called genetic engineering.

Don’t waste time
Get a verified writer to help you with Usage of Cell and Microorganisms in Genetic Engineering
Hire writer
$35.80 for a 2-page paper

(Tortora, Funke, & Case, 2010, p. 247) To get multiple copies of a gene or other piece of DNA you must isolate the DNA from its source and then insert it into a DNA vector that can replicate itself. (\"DNA cloning,\" n.

d.) We know that enzymes are required to replicate DNA, and enzymes are proteins and that proteins denature at high temperatures. Therefore, making DNA in a lab requires boiling the DNA. Enzymes that cut and replicate DNA have been extracted from these heat-loving organisms and are now used to explore the DNA of everything from viruses to humans.

Cloning means you replicated the same exact copy of the organism, which means that the DNA of the cloned organism will be the same as the original. GMO means a new DNA has been introduced, and the scientists have picked out a specific set of genes.

For example, one of the significant outcomes of this relatively new field has been the proliferation of genetically modified crops and organisms. Some people do not like the idea of taking a gene from bacteria and splicing it into a corn plant. Artificial selection has given us the specific strains of cattle and grains we consume today. Pros and Cons to this vary as there is concern for benefits and risk to GMO’s. GMO’s have helped by making crops more resistant to diseases as they grow. It also increases nutritional value or gives a better flavor, as well as a lower cost to the consumers. Those against GMO’s say they are not good for health reasons and they are prone to more allergic reactions, some researchers believe that eating GMO foods can contribute to the development of cancer, but The American Cancer Society (ACS) have said that there is no evidence for this. In the USA, the Food and Drug Agency, the Environmental Protection Agency and the US Department of Agriculture, Animal and Plant Health Inspection Service are all involved in the regulatory process for GM crop approval. Consequently, GM plants undergo extensive safety testing prior to commercialization. (\"Genetically modified plants and human health,\" 1)

Gene therapy involves altering the genes inside your body\'s cells in an effort to treat or stop disease. For example, Stem cells. Stem cells are the cells from which all other cells in your body are created. For gene therapy, stem cells can be trained in a lab to become cells that can help fight disease, and Diabetes genetic engineering has been used to produce a type of insulin, very similar to our own, from yeast and bacteria to help control glucose levels. The possibilities of gene therapy hold much promise. Clinical trials of gene therapy in people have shown some success in treating certain diseases, such as: Severe combined immune deficiency, Hemophilia, Blindness caused by retinitis pigmentosa, Leukemia. (\"Gene therapy,\" 2017)

Usage of Cell and Microorganisms in Genetic Engineering. (2021, Oct 31). Retrieved from http://envrexperts.com/free-essays/essay-about-usage-cell-and-microorganisms-genetic-engineering 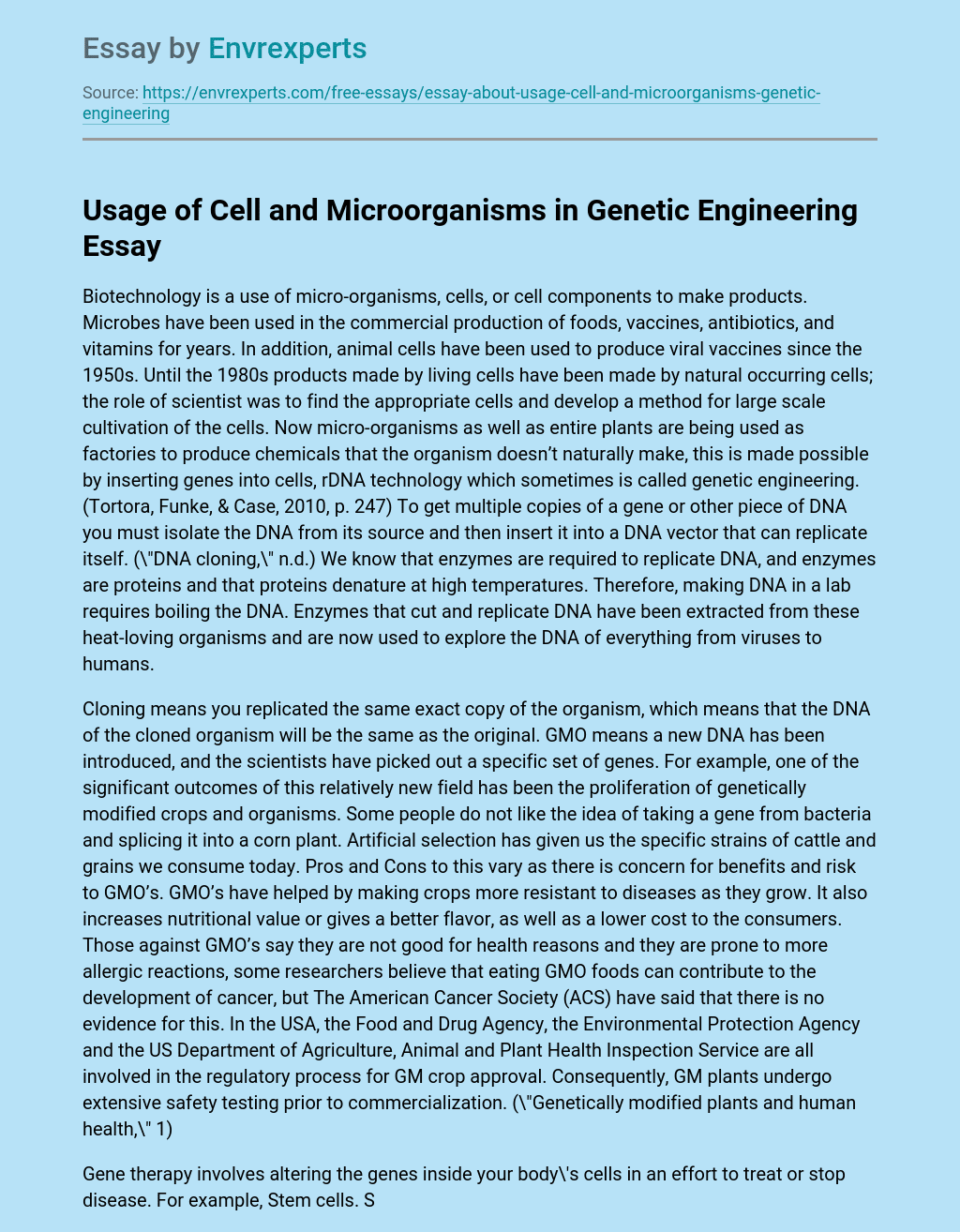